This is a reference resource written about Hawaiian history, culture, and creation stories. You can read through the resource in its entirety, or you can use the subheadings on the right to navigate to specific topics.

The Kumulipo is a genealogical chant connecting back to the origins of everything and describing the interconnectedness of all things. Kumulipo translates loosely to “the source of darkness.” Darkness is understood to be a fertile space, not something scary to be feared. All life arose out of this darkness.

The Kumulipo is composed of 16 wā (eras) that go from darkness to light. Sea creatures birthed in each wā have a paired land creature or land plant. These pairings promote understanding that all things are interconnected.

The Kumulipo states that the islands are birthed in the same way people are. This shared origin reinforces the knowledge that the ‘āina (land) is a living being. To learn more about the Kumulipo, watch this video.

During the kingdom period, Hawaiians recited the Kumulipo as an assertion of agency and statehood. After the illegal overthrow of the Hawaiian government, Hawaiians continued to recite the Kumulipo, keeping their powerful cultural heritage alive in the face of military occupation. During her imprisonment, Queen Lili‘uokalani translated the Kumulipo into English.

The Kingdom of Hawai‘i

The Hawaiian Islands unified under King Kamehameha’s leadership in 1795. Three years after the unification, the Kingdom of Hawai‘i encountered Europeans. The arrival of British explorer James Cook to the islands paved the way for two-way travel between Hawai‘i and Europe and the United States. European countries and the United States did not immediately recognize Hawaiian sovereignty, but by the 19th century, Hawai‘i was an internationally recognized nation.

The Hawaiian flag (shown in this photo) includes the Union Jack, a British naval symbol. This reflects the British Royal Navy’s historical relations with the Kingdom of Hawai‘i, particularly with King Kamehameha. 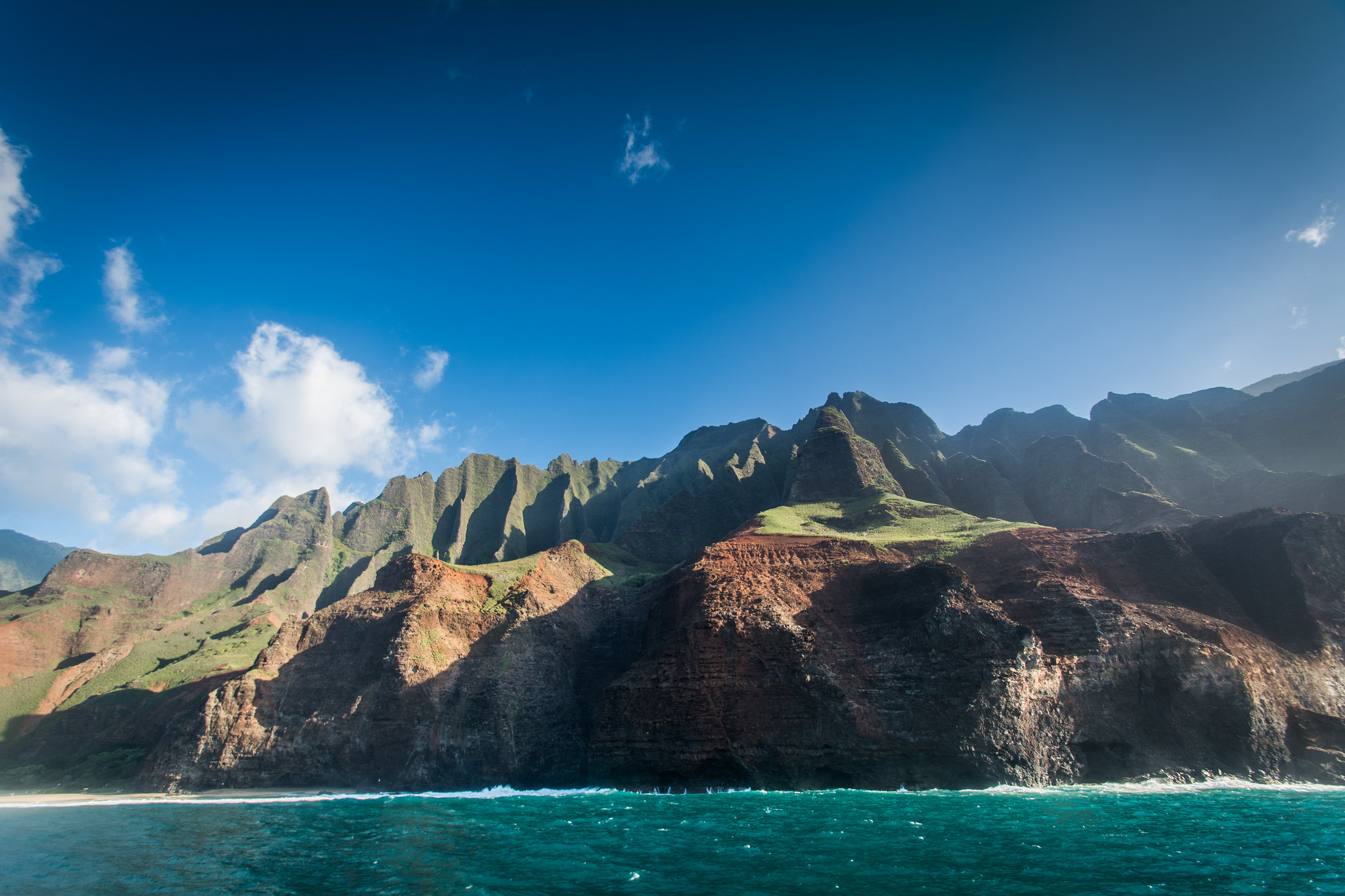 Situated in the Pacific Ocean, at an approximate distance of 2,000 miles from the United States’ West Coast, Hawai‘i is composed of approximately 132 islands, including eight main islands. 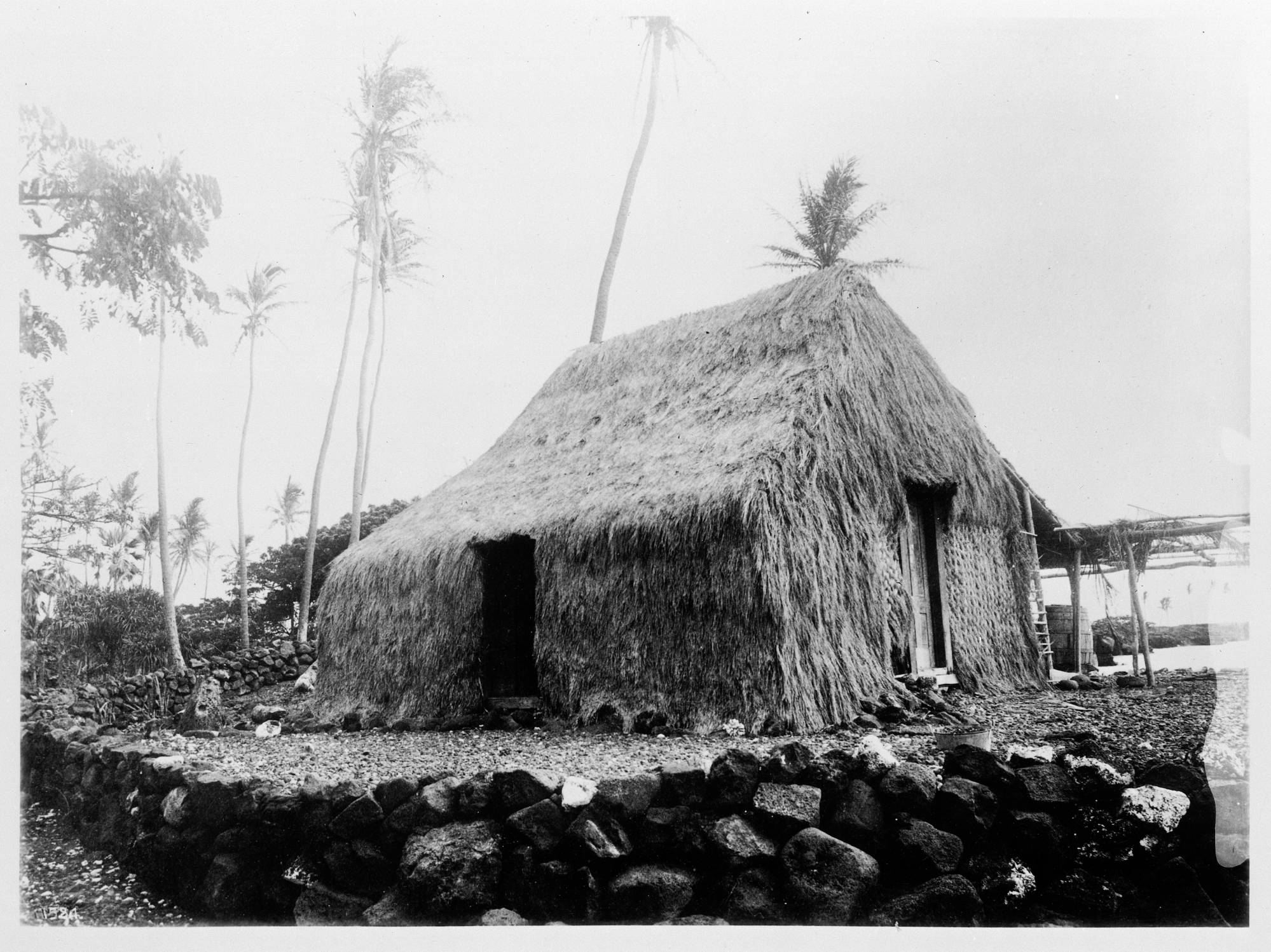 The beautiful archipelago is estimated to have been first encountered by Polynesians as early as 400 A.D. Voyaging throughout the Pacific may have continued between Asia and the Pacific Islands up until the 12th and 13th centuries, when kingdom-nations began to appear on the islands of Hawai‘i. These kingdoms were united in 1795 under the direction of the warrior-chief named Kamehameha the Great, who led a unification campaign that lasted 15 years.

During the kingdom period (1795–1893), Hawaiians traveled the world in many capacities. Maka‘āinana, or non-noble citizens, often found employment on whaling and fur ships. Ali‘i (nobility) traveled the world to meet with rulers and nobles of other countries. This illustration (left) shows Hawaiian King Liholiho and other Hawaiian royalty at the theater during a visit to England. 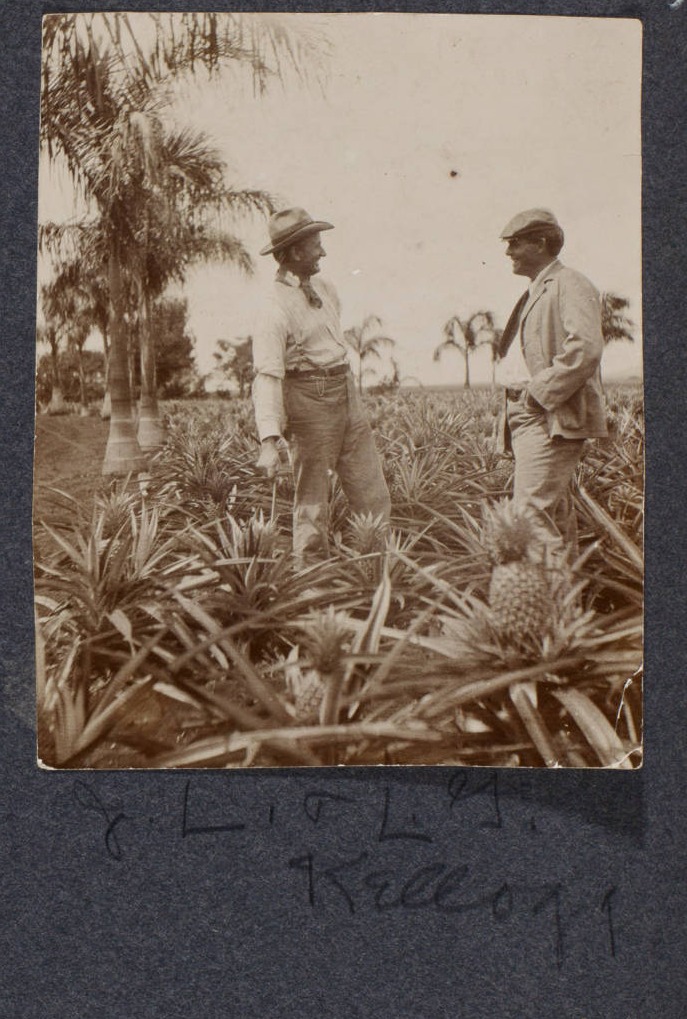 While Hawaiians were traveling the world, foreigners were traveling to Hawai‘i. Missionaries, who first arrived in the decades before international recognition of Hawaiian sovereignty, were some of the first non-Hawaiians to move to the islands. A while later, plantation owners moved to Hawai‘i to profit off the land. 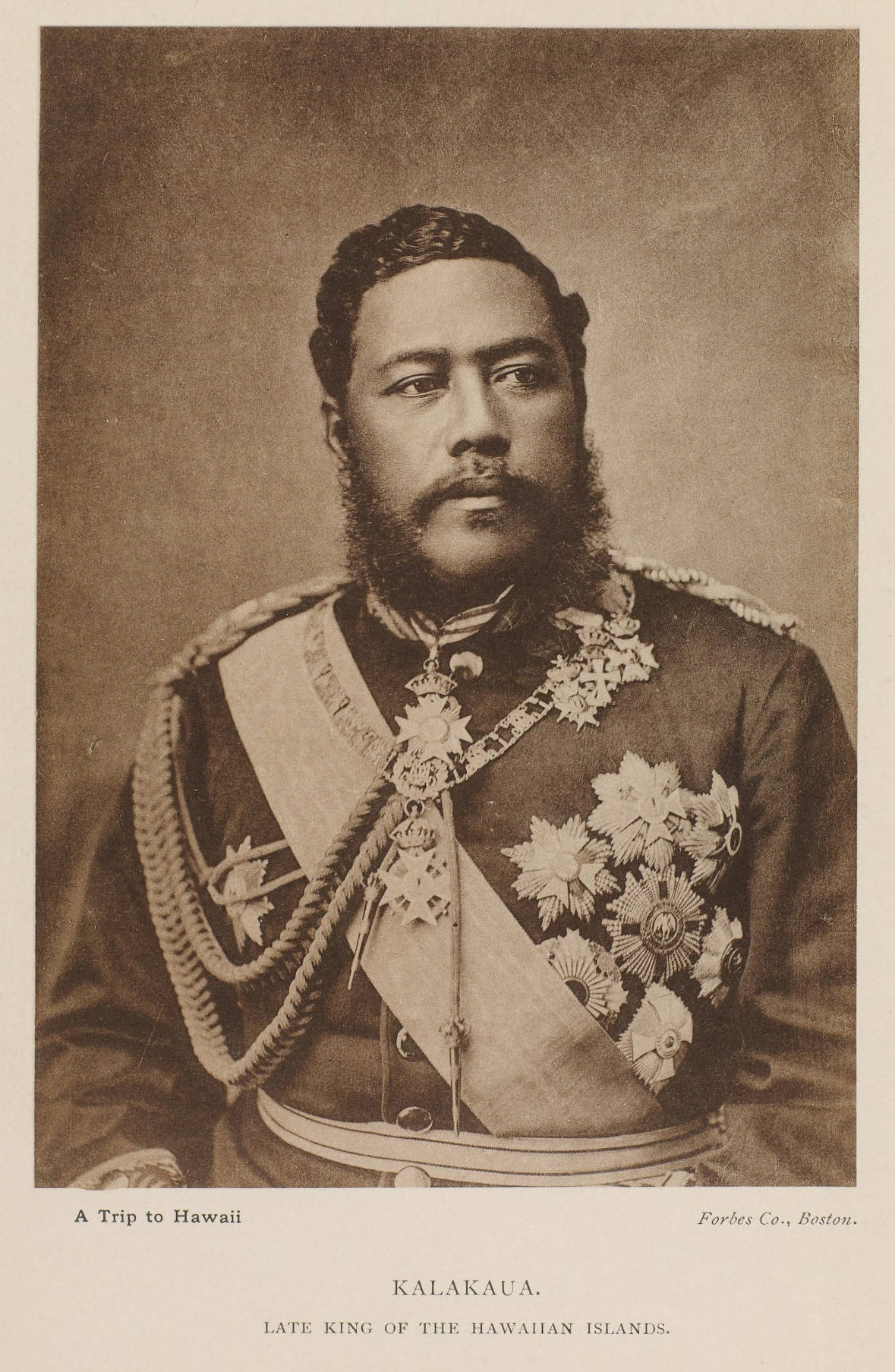 The Kingdom of Hawai‘i faced several threats from foreigners (especially plantation owners, missionaries, and lawyers) who made claims about Hawaiian governance. Through a series of violent and illegal actions, white settlers took control of Hawai‘i’s government and created the Republic of Hawai‘i.

In 1887, King Kalākaua was held at gunpoint by a militia and forced to sign the Bayonet Constitution, which was drafted by a group of white lawyers and businessmen who were motivated by sugar profits, personal gain, and power. This new constitution severely limited the power of the Hawaiian monarch and expanded the power of European and American foreigners.

When the militia first began threatening violence, King Kalākaua contacted the U.S. ambassador to Hawai‘i, George W. Merrill. Merrill refused to defuse the American-led militia, instead suggesting to King Kalākaua that he comply with the demands. 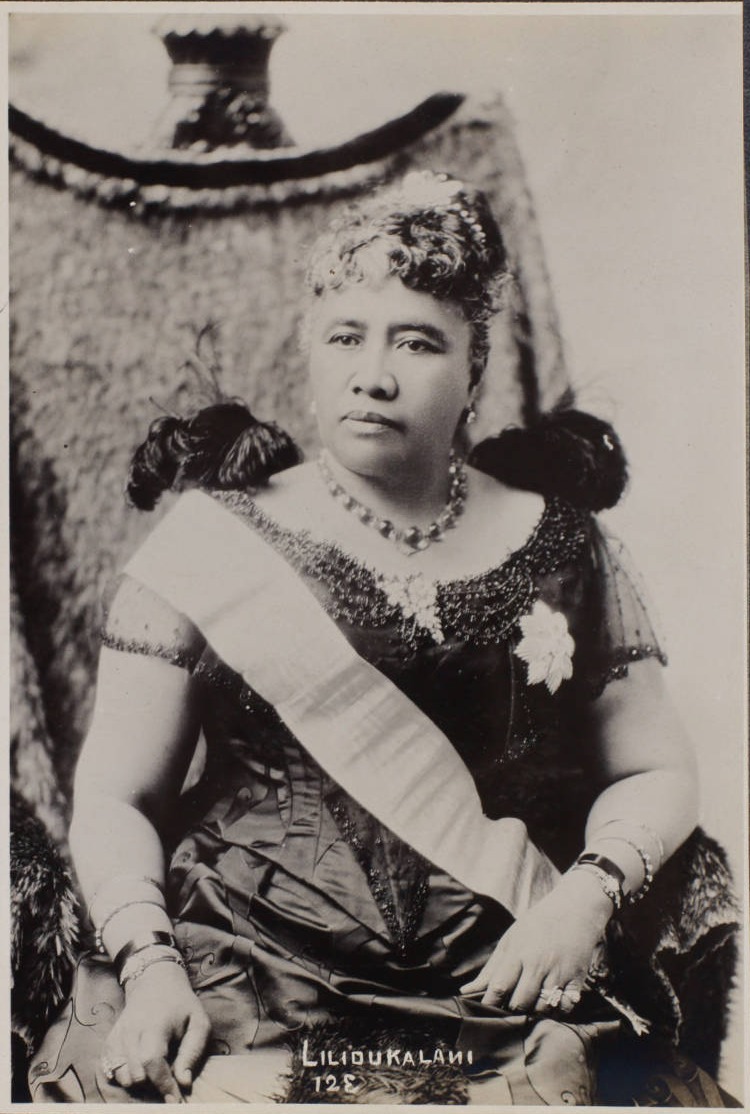 In response, a cabal (political group) of U.S. and European businessmen overthrew Queen Lili‘uokalani. The U.S. ambassador to Hawai‘i lent military support to the cabal. The queen was imprisoned in the ‘Iolani Palace, and the conspirators formed a provisional (temporary) government. This provisional government focused on protecting U.S. and European business interests.

U.S. President Grover Cleveland ordered the return of government control to the Hawaiians. The conspirators, however, renamed Hawai‘i the Republic of Hawai‘i in order to claim it was its own country and independent of the United States and Cleveland’s control.

Hawaiians did not want Hawai‘i to be a part of the United States. In an attempt to prevent this, Hawaiians submitted anti-annexation
petitions to the U.S. Congress. After her release from imprisonment, Queen Lili‘uokalani traveled to Washington, D.C., to lobby against annexation.

This illegal annexation led to Hawai‘i becoming a U.S. territory and later a U.S. state.​ 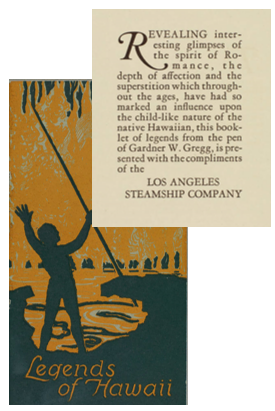 After the illegal annexation, Hawai‘i and Hawaiian culture became a novelty for people living on the U.S. mainland.

In the 1920s, Los Angeles’ harbor gained national acclaim when it offered a direct route from its port to Hawai‘i. World War I naval ships were refashioned into luxury cruise liners and transported up to 600 passengers three times a week. In addition, the Los Angeles Steamship Company offered transportation to Hawai‘i.

Among the ships’ many amenities, brochures and booklets written about Hawai‘i were commonly provided to the clientele. Some of these booklets, like the one pictured here, attempted to refashion Hawaiian folklore and stories to appeal to the cultural sensibilities of the Anglo middle class. These romanticized accounts, although creative in their approach, were misrepresentations of traditional Hawaiian beliefs and further contributed to the practice of appropriation to fulfill a Western ideology of all things foreign.

Altemus-Williams, Imani, and Marie Eriel Hobro. 2021. “Hawai‘i Is Not the Multicultural Paradise Some Say It Is.” National Geographic, May 17, 2021. https://www.nationalgeographic.com/culture/article/hawaii-not-multicultural-paradise-some-say-it-is.