Source 1: First two verses of Queen Lili‘uokalani’s translation of the Kumulipo to English

Information about the source
The Kumulipo is a living chant that has been passed on through oral and written traditions. The genealogical chant connects back to the origins of everything and describes the interconnectedness of all things. Kumulipo translates loosely to “the source of darkness.” Darkness is understood to be a fertile space, not something scary to be feared. All life arose out of this darkness. During her imprisonment, Queen Lili‘uokalani translated the Kumulipo into English.

Source 2: Excerpt from Legends of Hawaii booklet by Gardner W. Gregg
Information about the source
The Los Angeles Steamship Company offered transportation to Hawai‘i and provided a booklet to the passengers. Published by the steamship company, the booklet included Western interpretations of Hawaiian mythology. 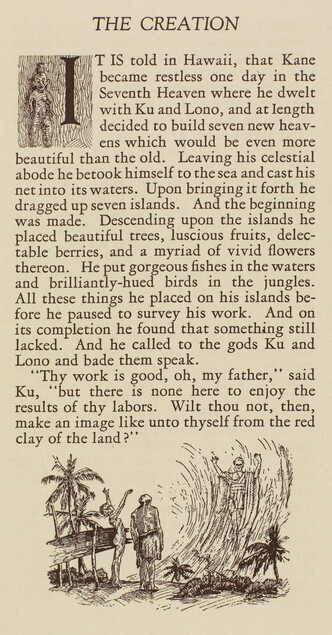 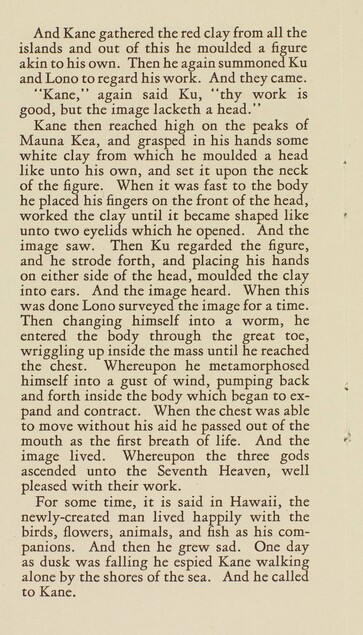 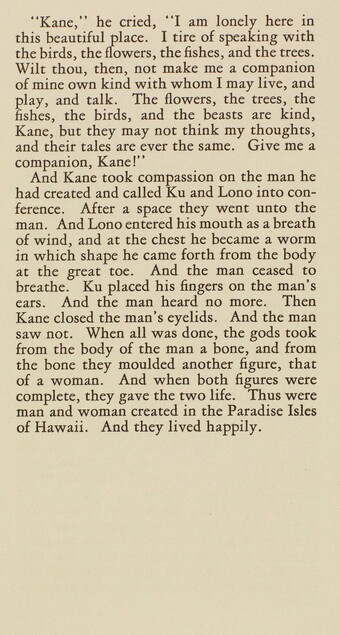 Transcription
The Creation
It is told in Hawaii, that Kane became restless one day in the Seventh Heaven where he dwelt with Ku and Lono, and at length decided to build seven new heavens which would be even more beautiful than the old. Leaving his celestial abode he betook himself to the sea and cast his net into its waters. Upon bringing it forth he dragged up seven islands. And the beginning was made. Descending upon the islands he placed beautiful trees, luscious fruits, delectable berries, and a myriad of vivid flowers thereon. He put gorgeous fishes in the waters and brilliantly hued birds in the jungles. All these things he placed on his islands before he paused to survey his work. And on its completion, he found that something still lacked. And he called to the gods Ku and Lono and bade them speak.

“Thy work is good, oh, my father,” said Ku, “but there is none here to enjoy the results of thy labors. Wilt thou not, then, make an image like unto thyself from the red clay of the land?”

And Kane gathered the red clay from all the islands and out of this he moulded a figure akin to his own. Then he again summoned Ku and Lono to regard his work. And they came.

“Kane,” again said Ku, “thy work is good, but the image lacketh a head.”

Kane then reached high on the peaks of Mauna Kea, and grasped in his hands some white clay from which he moulded a head like unto his own, and set it upon the neck of the figure. When it was fast to the body he placed his fingers on the front of the head, worked the clay until it became shaped like unto two eyelids which he opened. And the image saw. Then Ku regarded the figure, and he strode forth, and placing his hands on either side of the head, moulded the clay into ears. And the image heard. When this was done Lono surveyed the image for a time. Then changing himself into a worm, he entered the body through the great toe, wriggling up inside the mass until he reached the chest. Whereupon he metamorphosed himself into a gust of wind, pumping back and forth inside the body which began to expand and contract. When the chest was able to move without his aid he passed out of the mouth as the first breath of life. And the image lived. Whereupon the three gods ascended unto the Seventh Heaven, well pleased with their work.

For some time, it is said in Hawaii, the newly created man lived happily with the birds, flowers, animals, and fish as his companions. And then he grew sad. One day as dusk was falling he espied Kane walking alone by the shores of the sea. And he called to Kane.

“Kane,” he cried, “I am lonely here in this beautiful place. I tire of speaking with the birds, the flowers, the fishes, and the trees. Wilt thou, then, not make me a companion of mine own kind with whom I may live, and play, and talk. The flowers, the trees, the fishes, the birds, and the beasts are kind, Kane, but they may not think my thoughts, and their tales are ever the same. Give me a companion, Kane!”

And Kane took compassion on the man he had created and called Ku and Lono into conference. After a space they went unto the man. And Lono entered his mouth as a breath of wind, and at the chest he became a worm in which shape he came forth from the body at the great toe. And the man ceased to breathe. Ku placed his fingers on the man’s ears. And the man heard no more. Then Kane closed the man’s eyelids. And the man saw not. When all was done, the gods took from the body of the man a bone, and from the bone they moulded another figure, that of a woman. And when both figures were complete, they gave the two life.Thus were man and woman created in the Paradise Isles of Hawaii. And they lived happily.