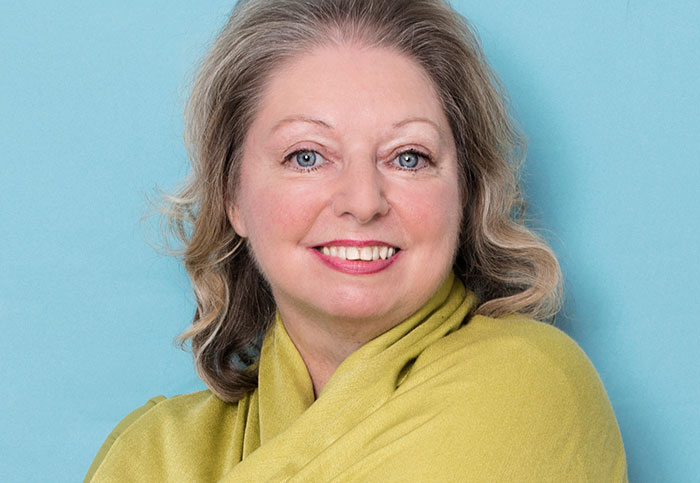 The sudden death last Thursday of famed British novelist Hilary Mantel was especially poignant for The Huntington community and for those who knew her as a treasured friend as well as an internationally celebrated author.

On Aug. 25, 2005, when I was the curator of British historical manuscripts at The Huntington, I received an extraordinary email almost out of the blue from Hilary. “Almost” because, although we had neither met nor corresponded in the past, I knew that our then-literary curator Sue Hodson had begun to collect Hilary’s papers for the Library in 2001. Sue and Hilary had met the year before at a Huntington conference devoted to modern British literature, during which Sue witnessed Hilary more than hold her own onstage with writers Martin Amis, Ian McEwan, and Christopher Hitchens. Discussions began almost immediately about the possibility of her papers eventually coming to The Huntington, and, in the ensuing years, she periodically sent batches of her literary papers to San Marino to be accessioned, cataloged, and made available to scholars. 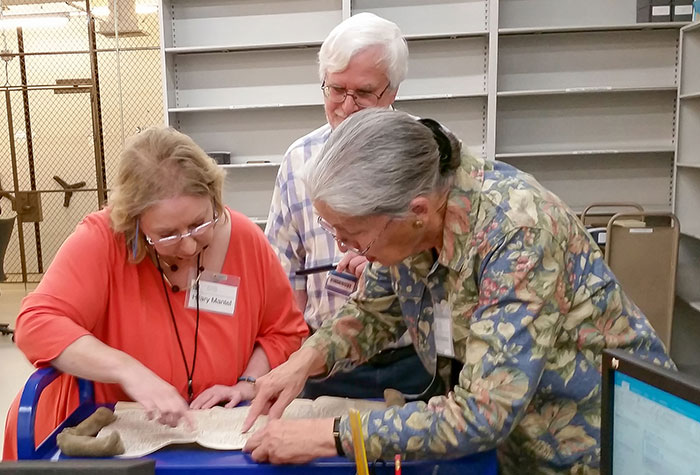 In 2005, Hilary mentioned to Sue that the subject of her next novel would be Thomas Cromwell (ca. 1485–1540), King Henry VIII’s powerful and notorious chief minister. Cromwell was the principal architect of the English Reformation, the dissolution of the Catholic monasteries, and the growing role of Parliament during the tumultuous decade of the 1530s. Sue knew that Cromwell was the subject of my 1975 doctoral dissertation at UCLA, and she suggested that Hilary and I might wish to correspond about our mutual interest in this complex man.

Indeed we did. Hilary’s initial letter to me was a manifesto, setting out in exquisite and deeply researched detail her fascination with Cromwell, her interpretation of his life and character and those of his contemporaries, her knowledge of Henrician England, and her plans for what would eventually become a spectacular and award-winning trilogy: Wolf Hall (2009), Bring Up the Bodies (2012), and The Mirror and the Light (2020). From the beginning, I was deeply impressed by her literary brilliance (no surprise), but also—less expected—by the solid professional historical research she brought to her reconstruction of Cromwell’s life and times. 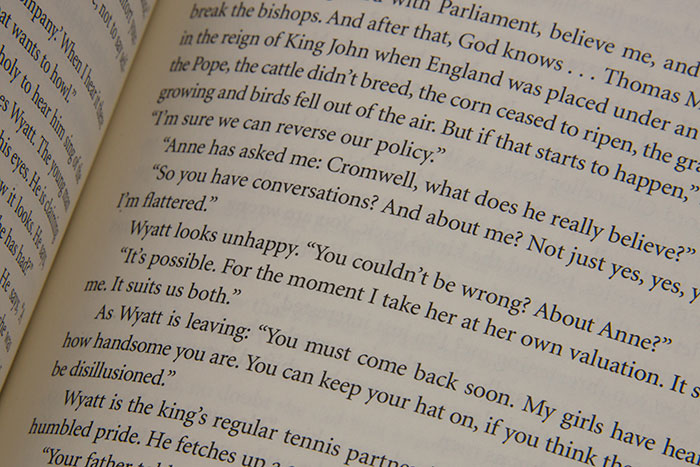 The literary world agreed. Two Booker prizes, a National Book Critics Circle award from the United States, a CBE (Commander of the Order of the British Empire) from Queen Elizabeth II, stage adaptations by the Royal Shakespeare Company, and a BBC television series based on the books reintroduced Cromwell to the wider world as a complex and compelling hero. Hilary’s books challenged his former—if less generally known—reputation as the Machiavellian enemy of St. Thomas More and the architect of the dissolution of the monasteries.

We corresponded often throughout these successive triumphs. Regular deliveries of her papers came to Sue to be cataloged for The Huntington’s manuscript collections, and I could occasionally offer technical advice based on our own collections of rare original Tudor manuscripts. I enjoyed our long discussions of “TC” and his world, and I recall with much pleasure the small details Hilary cared so much to get right: “What would his desktop have looked like?” she asked, or “What would you do [in his day] about spilled ink?” I constructed amateurish modern reproductions of a 16th-century letter (addressed, folded, and sealed), a vellum grant of office or title deed with a pendant wax seal, or a rolled and endorsed financial account of manorial income—and sent them off with laughter and explanations. 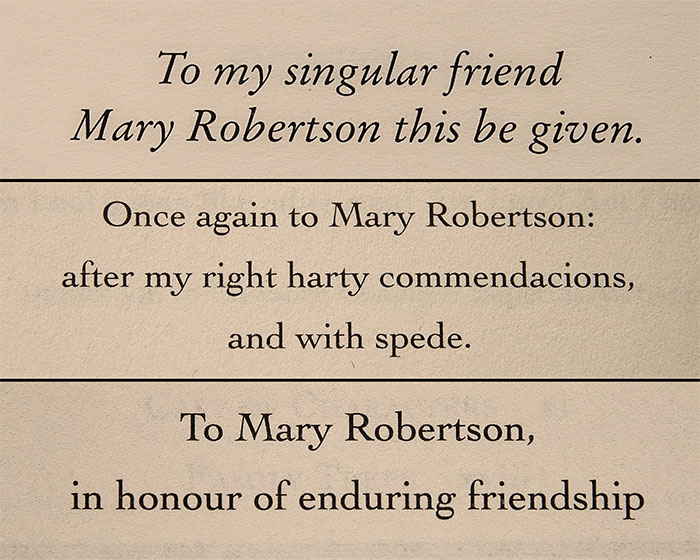 All three volumes of Mantel’s acclaimed trilogy about Thomas Cromwell are dedicated to Mary Robertson. Top to bottom: Details of the dedicatory pages of Wolf Hall (2009), Bring Up the Bodies (2012), and The Mirror and the Light (2020). | Photos by Arianna Muñoz.

Hilary returned to The Huntington to lecture, both Sue and I at separate times visited her in England, and her friendship was a continuing privilege. The world of letters has lost an extraordinary talent, and The Huntington has lost a good friend. But the voluminous collection in our Hilary Mantel Papers will help to preserve her memory and accomplishments forever.

Mary Robertson is the former William A. Moffett Curator of British Historical Manuscripts at The Huntington.