Here's a time lapse of the second bloom produced by our Corpse Flower "Scentennial," recorded over a period of about 40 hours. The rare Amorphophallus titanum plant bloomed on June 19, 2022.

The Titan Arum, Amorphophallus titanum, has been called the world’s largest flower, with a bloom that can grow to more than 8 feet in height and 4 feet in diameter. At the peak of its growth, the Titan Arum can grow up to 6 inches a day! It is a rare tropical plant native to the equatorial rainforests of Sumatra, Indonesia. When in flower, it exudes a foul stench that smells like rotting meat. For that reason, Indonesians call it Bunga Bangkai, which means “Corpse Flower.” The plant grows from a large corm, a bulb-like tuber, under the soil. The visible parts are the spadix (the fleshy upright column) and the spathe (the petal-like outer covering). When the plant blooms, the spathe opens to reveal a velvety maroon interior and begins to emit a foul stench, earning it the nickname “Stinky Plant.” Though everyone smells something different, the scent is made up of several different compounds: primarily dimethyl trisulfide (stinky cheese or boiled cabbage) and dimethyl disulfide (garlic), but also levels of trimethylamine (rotting fish), isovaleric acid (sweaty socks), benzyl alcohol (sweet flowery scent), and indole.⁣⁣ The purpose of the putrid stench? To attract nighttime pollinators like flesh flies, carrion beetles, and sweat bees. ⁣

Corpse Flowers at The Huntington

In August 1999, a Corpse Flower bloomed for the first time at The Huntington. This rare occurrence provided an opportunity for thousands of visitors to witness one of the wonders of the botanical world. Since that extraordinary event, The Huntington has shared the flowering of this rare species with the public in subsequent years. Currently, we maintain several dozen plants of Amorphophallus titanum in our greenhouses and planted in the Conservatory.

When Will the Corpse Flower Bloom? 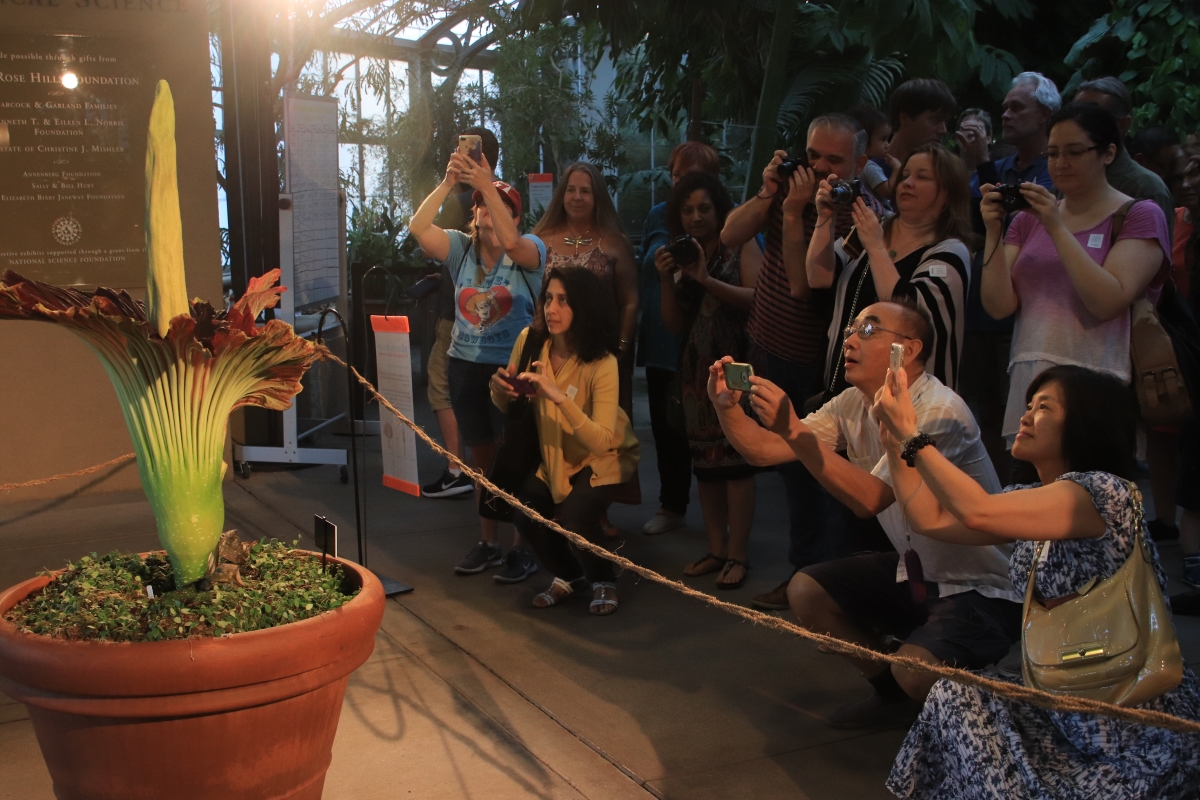 Visitors capture a previous bloom at The Huntington.

Nobody can predict when a Corpse Flower will bloom. A Titan Arum in bloom is as rare as it is spectacular. A plant can go for many years without flowering. When the corm comes out of dormancy and a bud emerges, it will either develop into a flower or a new leaf; it’s when we see the tip of the emerging spadix that we know a bloom will occur. Being in the right place at the right time to see one of these magnificent plants in bloom can be a once-in-a-lifetime treat! 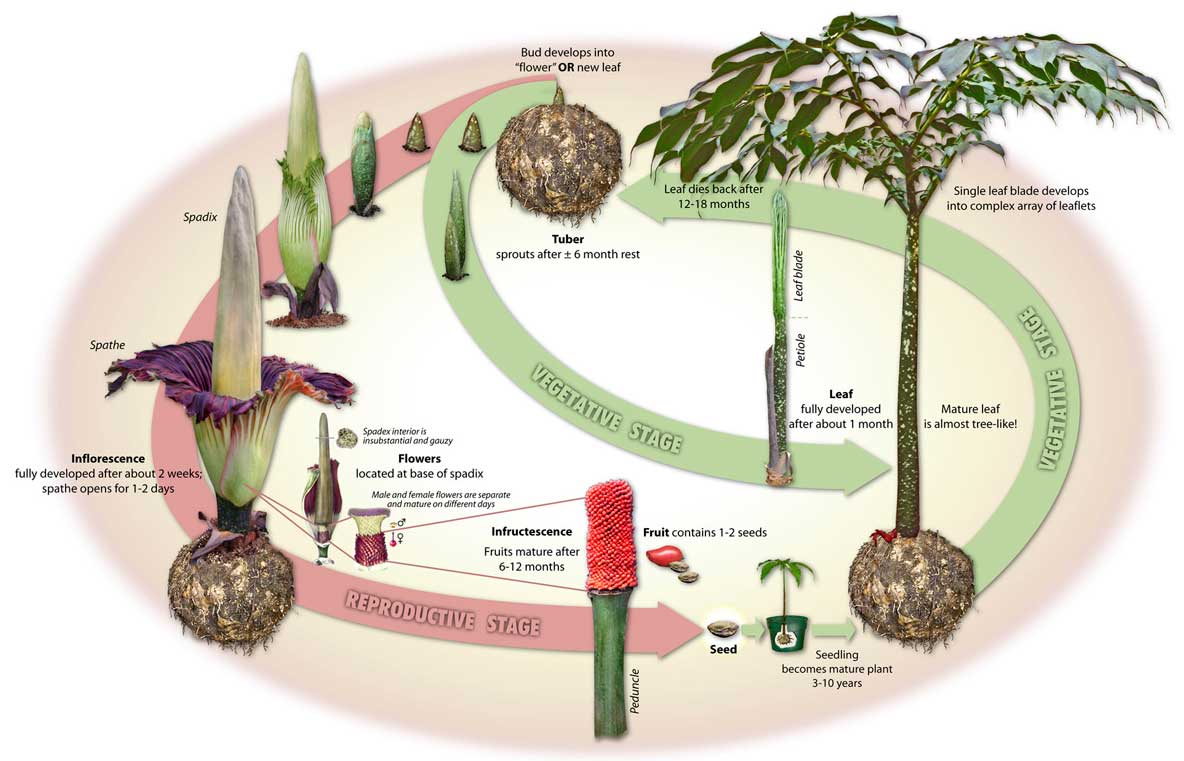 History of the Corpse Flower

The Corpse Flower or Titan Arum is native to the rainforests of western Sumatra, Indonesia where it grows on limestone hills at low elevations, in forest openings where there is enough light and space to produce its massive leaf and inflorescence or flower-bearing structure. The climate is warm and rainy, with little variance throughout the year. Although it is one of the most famous plants in the world, little is known of its natural history.

The size of the Corpse Flower bloom is probably its greatest attraction. The previous tallest flowering specimen at The Huntington, in 2009, was almost seven feet tall, eclipsed by “Stankosaurus Rex” at over 8 feet tall (98 inches). The world record holder comes in at over 12 feet tall. The "tuber", which is actually a corm, can weigh over 300 pounds and the solitary umbrella-like leaf can be over 15 feet tall. But it's the rotting flesh smell of the flowers that makes this plant so memorable and notorious. Adding to the mystique is the ephemeral nature of such a massive flowering effort, lasting only 2-3 days, and the rarity of seeing a specimen in bloom at any time, anywhere.

When the Titan Arum blooms, it comes straight out of the soil from an underground corm, looking like a giant bud without any foliage. But the plant does produce a single, giant leaf when it isn't in bloom. You might not recognize it as a leaf, however: a mature plant will produce a leaf about 12 feet tall, consisting of a smooth stem topped with a fringe of leaflets, resembling a slender, green palm tree. Several of them are on display in The Huntington's Rose Hills Foundation Conservatory for Botanical Science. The leaf can last longer than a year before it dies away.

What is often referred to as the plant's flower is an inflorescence, a specialized structure that supports small individual flowers. The Corpse Flower produces the most massive unbranched inflorescence of any flowering plant. In common to all members of the aroid family, (Araceae), the inflorescence consists of an outer protective sheath (the spathe) that surrounds a central column bearing small individual flowers (the spadix). Better-known members of this family include philodendrons, anthuriums, calla lilies, pothos and others.

Just as notable as the size of this plant's bloom is the odor it emits when it is ready for pollination. On the first evening the spathe opens, a cocktail of powerful chemicals is released. The inflorescence also generates heat to assist in volatilizing these chemicals. This extraordinary action by the plant makes it easier for pollinators such as sweat bees and other insects to find the flowers. In the first phase, the female flowers are receptive to pollination and in the second phase, on the second day, male flowers release their pollen after the female flowers are no longer receptive. This carefully timed arrangement helps ensure that cross-pollination and fertilization will only occur between different individual plants.

Do I Have One at Home?

While Amorphophallus titanum is very rare, many similar (but much smaller) plants can be found growing in home gardens. One relative may be Amorphophallus rivieri, which grows to a height of about 4 feet and smells nearly as bad as its larger cousin. Two other related plants are the Dragon Arum (Dracunculus vulgaris), which grows to about 2 to 3 feet in height, and the Voodoo Lily (Sauromatum venosum), which grows to 12 to 18 inches in overall height. Calla lilies, anthuriums, and philodendrons are also members of the same family.

We’ve gathered up your most frequently asked questions and answered them here. Do you have a question about the Corpse Flower? Ask our Stinky Expert!

How long does it take for the bloom to actually open? Minutes? Hours?

Individual bloom times vary, but typically it’s several hours from when the bloom begins to open until it’s fully open.

I smelled it when it bloomed last year—it really stinks! What makes it smell like rotten meat?

Once it flowers, how long before it closes and collapses? In other words, once we get word that it’s in bloom, how quickly should we get over there?

The bloom typically lasts only one or two days.

Is the plant also known as Rafflesia?

No. Rafflesia, although also from Indonesia and other parts of southeast Asia, is in a different family and unrelated to Amorphophallus. Rafflesia has the distinction of having the largest individual flower, up to about 3 feet across.

How do you pollinate it once the bloom opens?

A good quality paintbrush—preferably sable—is used to dab up the "donor pollen" from male flowers and is applied to the receptive stigmas of the female flowers on the first night or the morning after it opens. The window of opportunity for this is roughly one day because on the first day after opening, the male flowers shed their pollen and the female flowers are no longer receptive. The plant does this to prevent autogamy, or self-pollination, to maximize the distribution of genes and maintain more adaptive genetic diversity.

I think I have one growing in my yard. Is that possible?

It's possible! But unlikely. The Corpse Flower prefers an evenly warm and humid environment such as a greenhouse. We recently received a picture from someone who had one blooming in a container in his backyard in Seal Beach! While Amorphophallus titanum is very rare, many similar, but much smaller plants can be found growing in home gardens. The closest relative most likely may be Amorphophallus rivieri, which grows to a height of about four feet and smells nearly as bad as its larger cousin. Two other related plants are the Dragon Arum (Dracunculus vulgaris), which grows to about 2-3 feet in height, and the Voodoo Lily (Sauromatum venosum), which grows to 12-18 inches in overall height. Calla lilies, anthuriums, and philodendrons are also members of the same family.

Can I buy my own Stinky plant?

Yes! There are many sources online to purchase an Amorphophallus titanum, including the Huntington’s International Succulent Introductions. This rare plant is for plant enthusiasts who want a challenge and will be committed to nearly a decade of nurturing and pampering this rare and attractive giant.

To what taxonomic class, order, and family does genus Amorphophallus titanum belong?

In the summer of 1999, The Huntington was the focus of world-wide attention when it exhibited the first Amorphophallus titanum ever to bloom in California. It was only the 11th recorded bloom of one of these plants in the United States. During the Titan's short bloom, Huntington botanists hand-pollinated the plant with its own pollen, using an experimental technique (self-pollination is normally impossible). The procedure was a success resulting in fruit and 10 fertile seeds from which 10 seedlings eventually were produced. Today, after a number of other successful blooms and pollinations, there are several generations of "Little Stinkers" in the botanical greenhouses, waiting for their moment to bloom.

From Jungle to Greenhouse

The Corpse Flower was first made known to the outside world by Italian botanist and explorer Odoardo Beccari in 1878. Seeds and corms brought to Italy at that time were shared with other gardens. The first flowering of the Corpse Flower in cultivation was in 1889 at the Royal Botanic Gardens at Kew, England, from the Beccari introduction. It flowered in the Western Hemisphere for the first time at the New York Botanical Garden in 1937. Few specimens of Amorphophallus titanum were grown or flowered until the 1990s, when seeds were gathered in the wild and distributed widely among botanical gardens and private collectors. Since then, this plant has bloomed on over 500 occasions in gardens around the world.

The blooming of a rare plant like Amorphophallus titanum provides The Huntington with an opportunity to pursue three of its most important missions: research, education, and conservation. With each flowering, botanists learn more about this unusual plant, while The Huntington shares with its visitors not only some fascinating new facts, but also an increased appreciation for the wonder and diversity of the plant kingdom. Through ongoing conservation efforts, The Huntington helps to protect rare and endangered plants from extinction. The Huntington's Rose Hills Foundation Conservatory for Botanical Science showcases many amazing plants from around the world, including Amorphophallus titanum, with interactive exhibits for families that encourage curiosity and discovery. 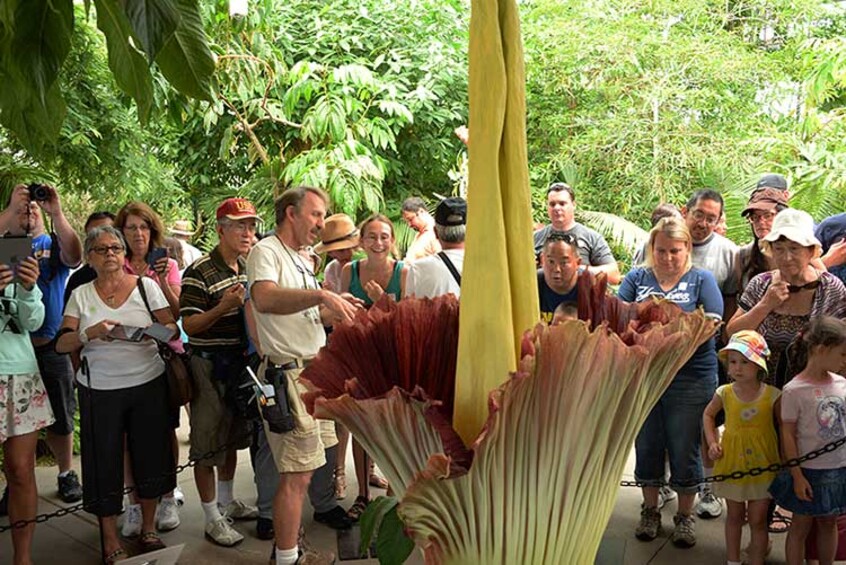 Visitors gather to smell the Corpse Flower’s foul stench during the August 2014 bloom. 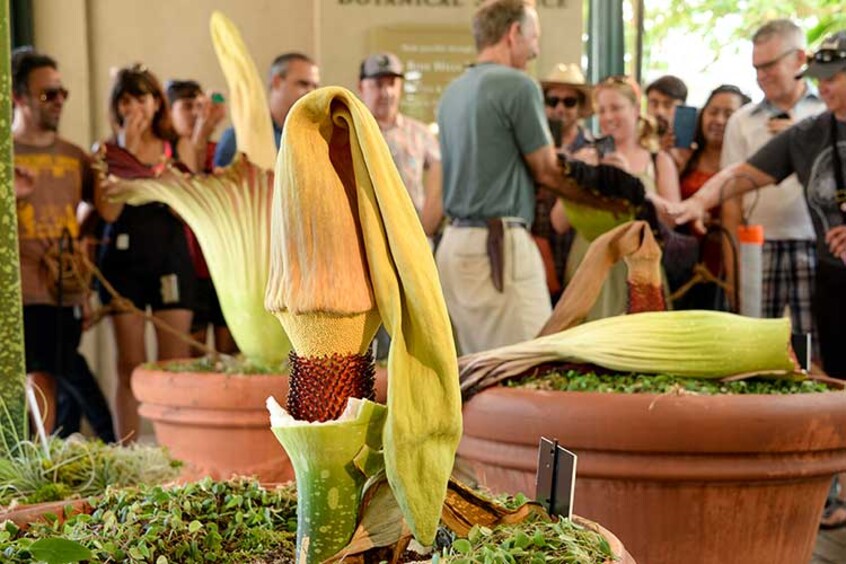 A record three Corpse Flowers bloomed at The Huntington in August 2018 and were named “Stink,” “Stank,” and “Stunk.”
After blooming, the tall spadix collapses. 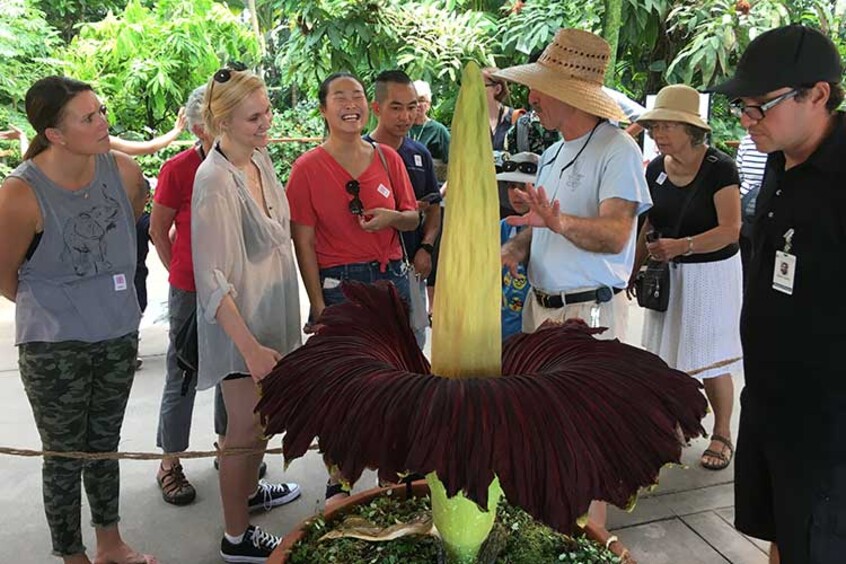 Huntington botanical curator John Trager with one of the three 2018 flowers in full bloom. 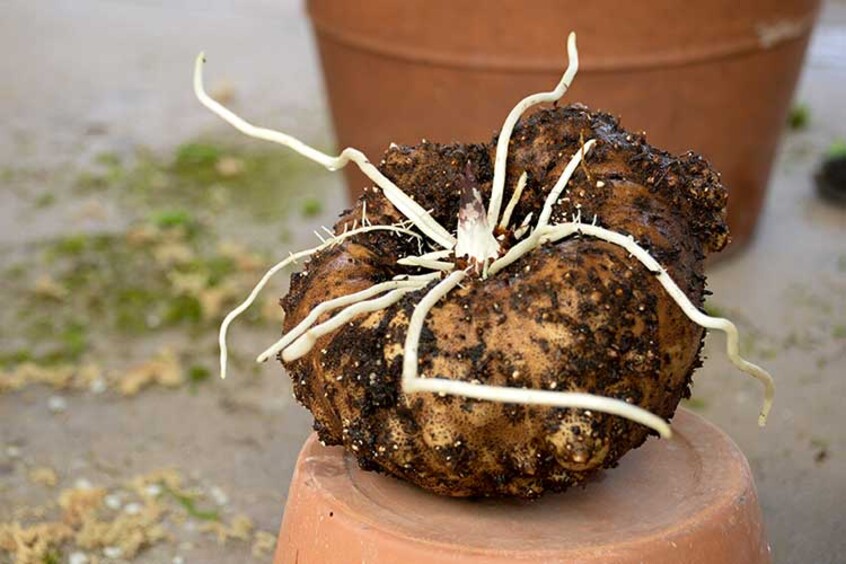 The plant grows from a large bulb-like tuber, or “corm,” under the soil. 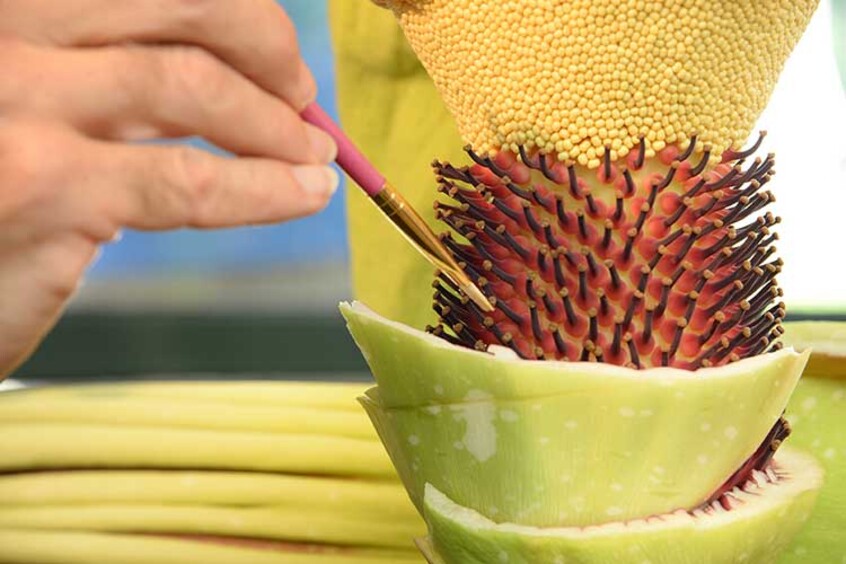 Huntington botanists hand-pollinate the plants, resulting in fruit and fertile seeds from which several seedlings eventually were produced. 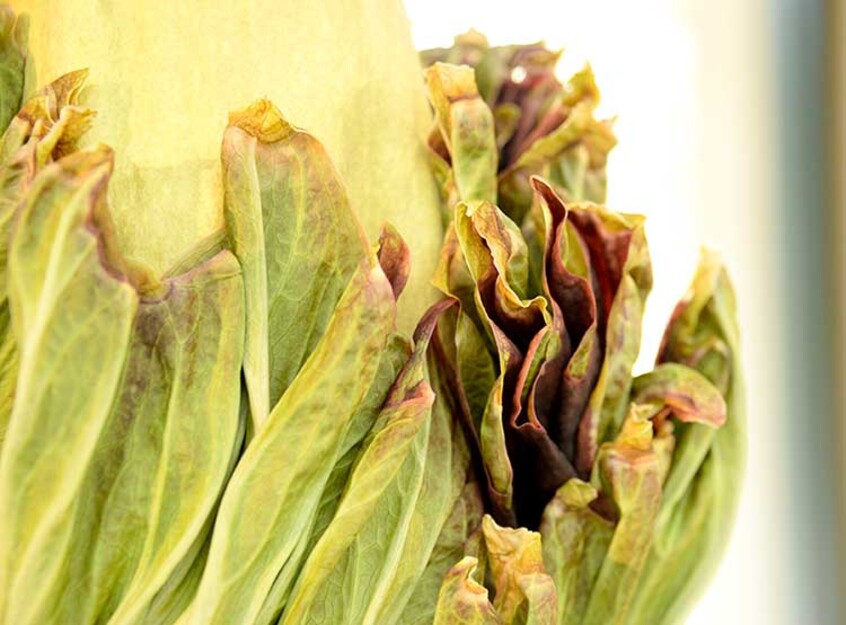 When the plant blooms, the spathe (the petal-like outer covering) opens to reveal a velvety maroon interior and begins to emit a foul stench.