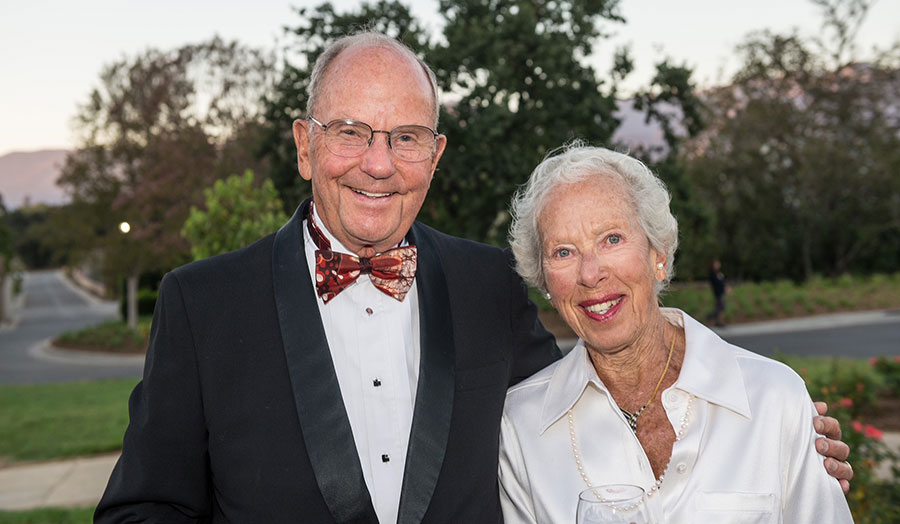 In recognition of Jim Folsom’s 36 years at the helm of The Huntington's Botanical Gardens, Sherm and Marge Telleen decided to honor Jim’s years of service and many accomplishments by providing a generous capstone gift of $500,000 for the Folsom Legacy Fund. This endowment will ensure a long-term source of funds for the replacement of equipment, trucks, and tools needed to care for the gardens. The Telleens’ gift brings the total raised to over $2.2 million with donations made by hundreds of donors.

Marge Telleen’s Huntington memories stretch back to her childhood growing up in San Marino. As a Stanford undergraduate, she met fellow student Sherm. They married, and after Sherm completed his MBA, they moved to her hometown. The couple soon became involved at The Huntington, joining the Society of Fellows in 1986. They have now been part of The Huntington for more than 35 years.

Randy Shulman, Vice President for Advancement and External Relations recalls the November 2011 windstorm that felled dozens of trees at The Huntington. “A group of staff arrived at 5:45 a.m. to survey the damage and assess how best to get roads cleared for emergency vehicles. Heading out to the grounds, I saw Marge and Sherm appear out of the brush with gloves at the ready to clear a foot path. They would not be deterred, as they continued to help clear small brush so that others could pass safely. That’s the kind of folks they are—sleeves rolled up and always ready to work.”

After retiring from his career as an investment adviser in 1991, Sherm joined The Huntington's Board of Governors, and went on to serve as Board chair from 2000 to 2002. He remains active on the planned giving and botanical committees. Sherm joined Marge as a garden docent along the way. Unfailingly positive, Sherm and Marge are well known garden docents by Huntington visitors. Before the onset of Covid-19 restrictions in March 2020, they were here often in their khakis and hats giving garden tours. An active member of the Botanical Gardens Committee, Sherm’s involvement was critical to the gardens initiative, and to The Huntington's “For Generations to Come” fundraising campaign. The Telleens, along with the late Marion Jorgenson, endowed the Director of the Botanical Gardens position through several gifts including a planned gift in their trust. Now they have designated an additional $500,000 planned gift to the Folsom Legacy Fund.

Given Sherm’s role on the Planned Giving Committee, it’s very fitting that the Telleens chose a planned gift as their vehicle for this wonderful donation. It’s also fitting that their support for endowments shows their desire to leave a lasting legacy, which will provide funds in perpetuity for important causes.

To talk about including The Huntington in your estate plans, please contact Cris Lutz, Senior Director, Planned Giving at 626-405-2212 or clutz@huntington.org