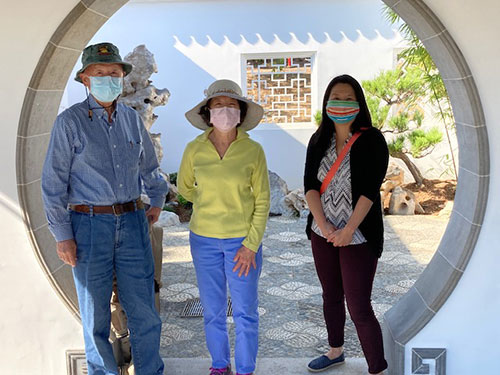 At a San Marino Rotary Club meeting more than two decades ago, Mark Chen was introduced to Jim Folsom, the Marge and Sherm Telleen/Marion and Earle Jorgensen Director of the Botanical Gardens at The Huntington. Little did either of them know that over the course of their friendship they would see the completion of one of the world’s largest Chinese gardens outside of China: The Huntington’s Liu Fang Yuan 流芳園, the Garden of Flowing Fragrance.

After moving to San Marino with his wife Mei and two young children, Mark became very involved in the community. He recognized the importance of creating opportunities for Chinese and Chinese American families to connect with tradition, culture, and each other.

It was during this time that Jim shared the idea of building a Chinese garden at The Huntington. Jim wanted to show how many important plants, such as roses and camellias, had their origins in China. “Jim said it was a good idea, and I agreed” Mark recalls. Mark believed that a Chinese garden would be something people of all backgrounds could enjoy, creating greater understanding between East and West while also giving Chinese American children a link to their heritage.

Mark felt strongly about supporting the garden effort, and in 1997 he encouraged the Chinese Club of San Marino to become the first organization to contribute to the project.

His support did not end in those early days, however. Over the years, Mark and Mei have continued to participate at The Huntington as members of the Society of Fellows. Then, last year, to celebrate the Chinese Garden’s long-awaited completion, Mark and Mei made a generous gift to the garden, followed by a second contribution this year, and plan to continue their support into the future as well.

Walking through the now complete 15-acre Chinese Garden with Jim recently, Mark reflected on what he has helped create. “I never imagined it would be this magnificent,” he said. When he first discussed the idea with Jim all those years ago, a classical style Chinese landscape at The Huntington was difficult for many people to envision. But Jim could see it; he had a vision of what the future might hold. And with the support of friends like Mark and Mei, that vision is now a reality.

For more information about supporting the Chinese Garden, please contact Sian Leong Adams, director of strategic initiatives, at 626-405-2277 or sadams@huntington.org.