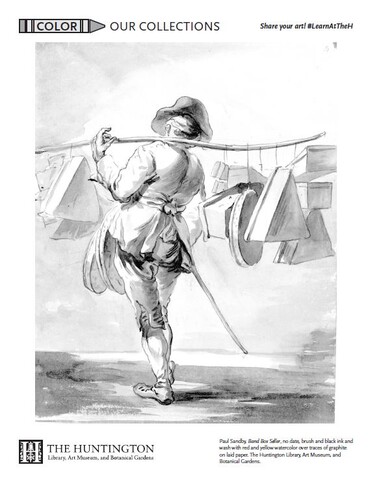 Paul Sandby, Band Box Seller, no date, brush and black ink and wash with red and yellow watercolor over traces of graphite on laid paper. The Huntington Library, Art Museum, and Botanical Gardens. 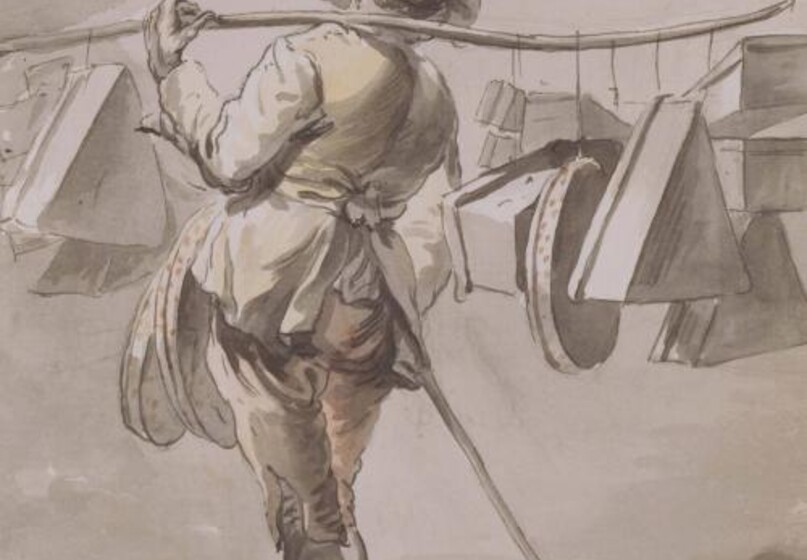 This work by Paul Sandby was created with multiple drawing mediums, including ink, graphite, and watercolor. If you look closely, you can see hints of yellow and red watercolor on the clothing of the man. It is interesting to think about why Sandby chose to mix artistic mediums instead of using just one. Sandby drew a man walking into the distance, his hips swaying under the weight of a rod with hanging boxes. The rectangular, circular, and triangular boxes are hat boxes showcasing the different sizes and shapes of this article of clothing. Sandby was a well-known watercolor artist who created and published sets of his drawings. One of these sets was titled London Cries, and it showcased merchants in the streets of London. Band Box Seller was not part of the London Cries series, but it may have been part of another series of figure drawings.

Paul Sandby, Band Box Seller, no date, brush and black ink and wash with red and yellow watercolor over traces of graphite on laid paper. The Huntington Library, Art Museum, and Botanical Gardens.

Drawing – It is a term used to describe a two-dimensional artwork in which a tool is used to make an image on a surface, such as a sheet of paper. These lines can be made with a pencil or pen, or non-linear or tonal marks made with other implements, such as brushes.

Ink – (brush) Ink that has been brushed on allows an artist to cover broader areas of the sheet in fewer strokes.

Graphite – (pencil) A type of carbon; graphite pencils allow artists to make hard or soft marks, thick or think or thin lines, and offer a range of values from light to dark.

WHERE IS THE BAND BOX SELLER GOING?

Write a story about this seller and his journey. Where is his final destination? Who ordered these hats? Why are there so many hats?

This drawing shows a variety of hat box shapes and sizes. Pick one and design what you think the hat inside looks like.