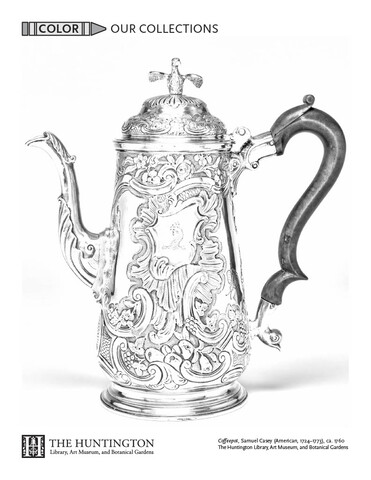 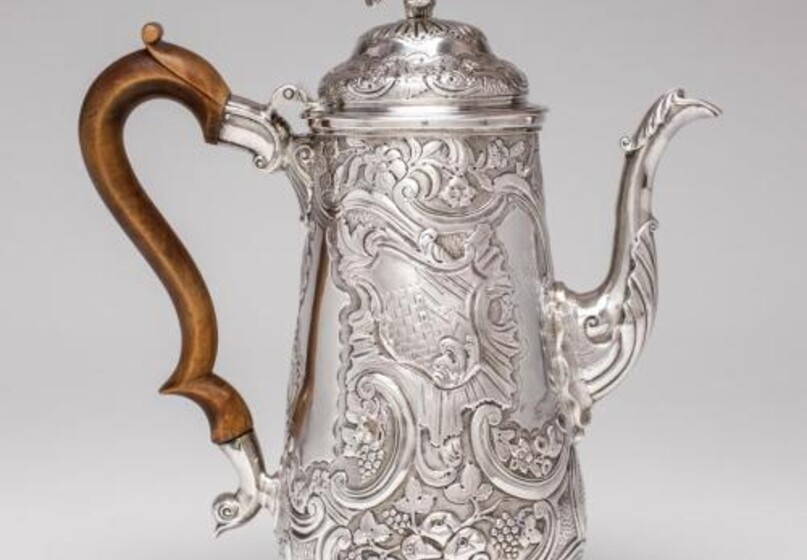 Samuel Casey (American, 1724–1773) was a silversmith in Rhode Island during the mid-18th century (1700s). By this time, coffee drinking—and the lively atmosphere of the Arabian Peninsula (Met Museum) coffee houses—had made its way from the Near East to Europe, and then later to the Americas, where coffee production thrived in the colonialized regions throughout the Caribbean, South America, and Central America. The popularity of coffee drinking grew, largely in part due to the heavy taxes imposed by King George III on tea. If this reminds you of the Boston Tea Party, you’d be right! A beautifully decorated pot like the one on this page would likely have been part of a larger service (set) and would have been very expensive, so not very many people could have owned something like this.

Here are a few ways to decorate silver pots for coffee, tea, hot water, or chocolate

Repoussé – hand-hammering from the reverse or inside to create a low relief design.

Chasing – hammering from the front or outside with various tools that depress or push aside the metal without removing any silver from the surface.

Engraving – a design carved into the surface with a sharp tool called a burin; silver is lost in this process.

Applied – a separate design element applied to the surface; this could be a separate metal decoration soldered on (with melted metal), silver-gilt (gold leaf to make it look gold), or enamel (colored glass powder that melts together when heated to look glossy)

DESIGN YOUR OWN COFFEEPOT