Still Life with a Basket of Fruit, Flowers, and Cornucopia

Coloring Page: Still Life with a Basket of Fruit, Flowers, and Cornucopia 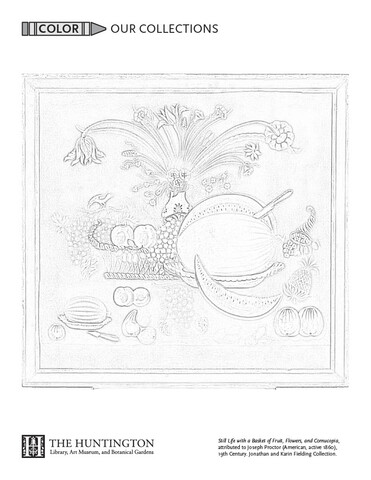 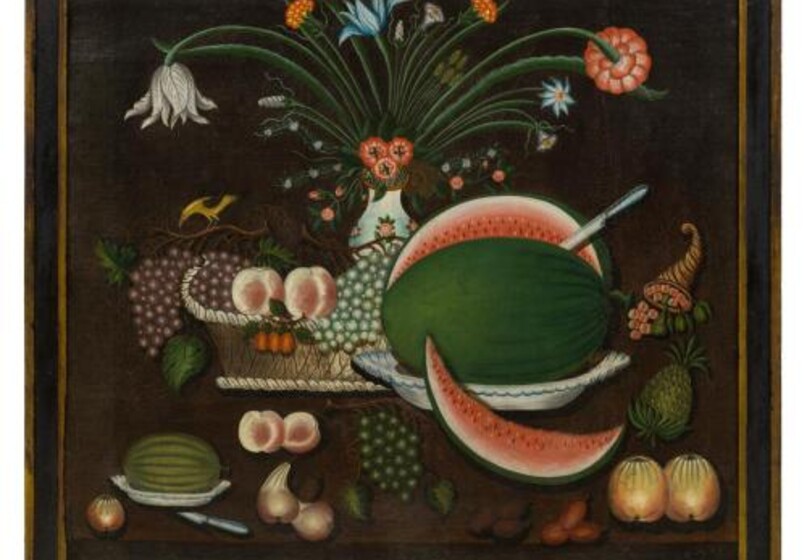 Painted in the 19th century, and reminiscent of 17th century Dutch still lifes, this dramatic and colorful work is attributed to Joseph Proctor, an African-American artist active in 1860s New York. Flower stems are weighed down by healthy blooms, the watermelon is sliced and ready to eat, and ripe peaches and pineapples have been gathered. It is a depiction of bountifulness in the land of opportunity and plenty.

Little is known about Proctor, and only a handful of works have been attributed to him. In the 1860 census, Proctor is recorded as an “artist” and his wife Sophia a “housekeeper” in New York City’s Lower East Side.

Click here for more information, or to zoom into detailed sections.

Is it possible that fruits – such as the pineapple depicted in the bottom right corner – were genetically different from the domesticated versions we’re used to seeing today? Or, is it more likely that the artist was inspired by a 17th-century Dutch still-life he would certainly have seen and perhaps had used as a model for this work?

Is it possible that, like traditional Dutch vanitas, (Britannica), this still life is a reminder of our mortality? For in-stance, the fruits will eventually rot, and the goldfinch (seen here plucking a grape) is a symbol of the resurrection in art, so it’s possible there’s an intended message.

Vanitas were a popular genre of Dutch 17th-century still-life paintings that evoked a fleeting quality of life, the certainty of death, and the futility of abundance and wealth. Do you think the abundance featured here in Proctor’s still life was meant to evoke these things? Or, perhaps just like our pineapple, we are over analyzing, and the artist was simply inspired by a Dutch work he’d seen and admired?

Click to see the work credited with starting the popular genre, Vanitas Still Life, ca. 1603 by Jacques de Gheyn II, at The Metropolitan Museum of Art