Magnificent Rebels: The First Romantics and the Invention of the Self

Andrea Wulf takes us on a vivid journey with a remarkable group of rebels who changed the way we think about ourselves and the world through their adventures and misadventures, passionate love affairs and heartbreak in this Wark Lecture about her latest book, Magnificent Rebels.
Lectures

Forget Paris... the real Revolution in the 1790s happened in Jena, a quiet German university town where the unlikely revolutionaries were not soldiers or politicians but poets and playwrights (Goethe, Schiller and Novalis), philosophers (Fichte, Schelling and Hegel), literary critics (the contentious Schlegel brothers) and scientists (Alexander von Humboldt). And at their heart was the formidable and free-spirited Caroline Schlegel. The Jena Set were the first Romantics. And their unconventional lives were laboratories for their radical ideas – about the creative power of the self, the aspirations of art and science, nature and the true meaning of freedom.

Andrea Wulf is an award-winning writer of seven books, including The Invention of Nature and Founding Gardeners. 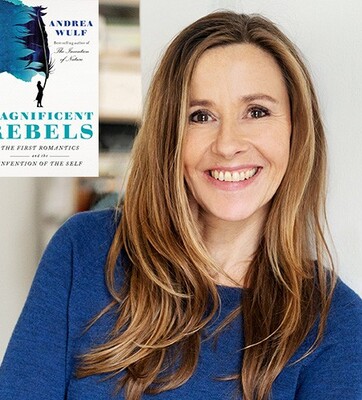