Samuel Johnson: Literary Giant of the 18th Century, a new exhibition opening May 23 and continuing through Sept. 21 in the West Hall of the Library, tells the story of Johnson's life and achievements through a display of rare books, manuscripts, and portraits drawn from The Huntington's holdings and from the Loren and Frances Rothschild Collection.
Archive 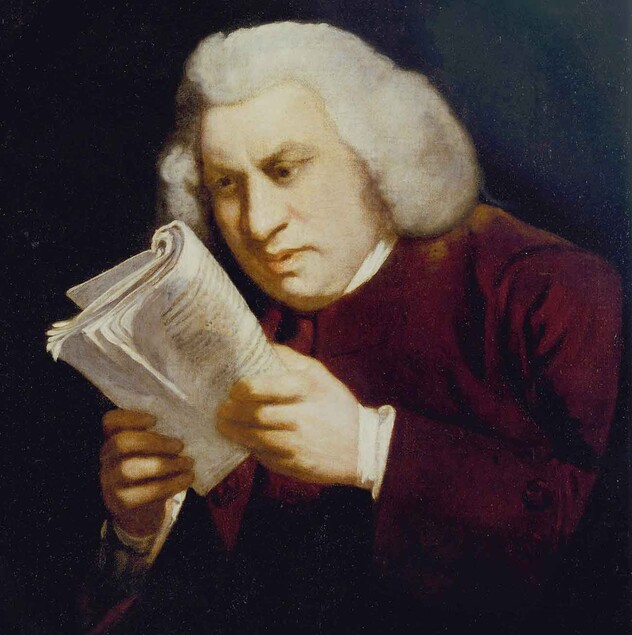 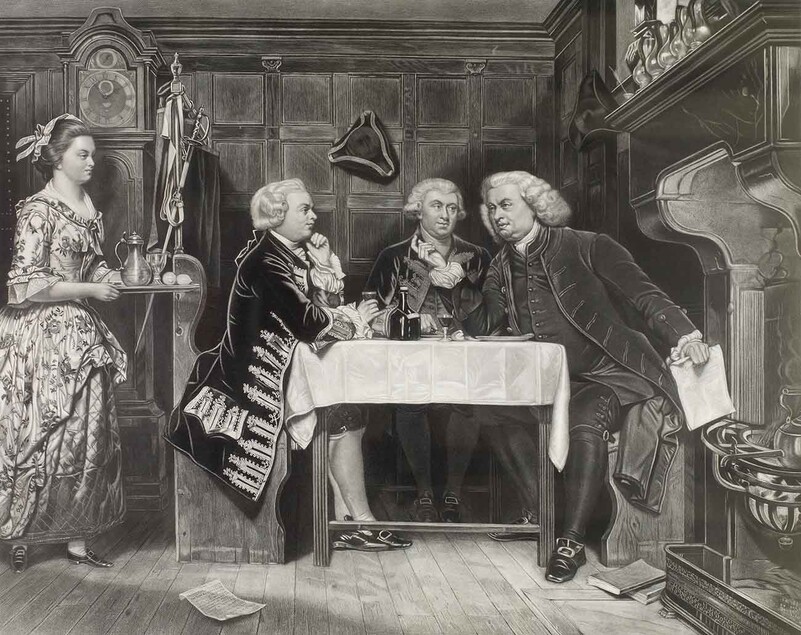 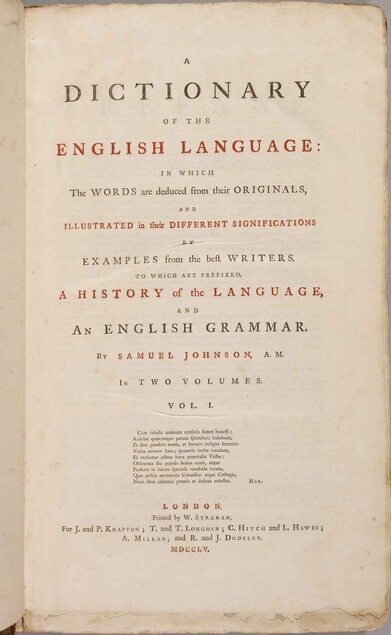 A first edition of Johnson's famous Dictionary of the English Language, published in 1755 in two volumes. Courtesy of Loren Rothschild.

Samuel Johnson (1709-1784)—one of the greatest moralists, poets, biographers, critics, essayists, and correspondents of all time—so dominated literary and intellectual life in the last half of the 18th century that the era is frequently referred to as the “Age of Johnson.” As a conversationalist and writer he was so insightful and adept in the use of language that only Shakespeare and the Bible are quoted more often.

Samuel Johnson: Literary Giant of the 18th Century, a new exhibition opening May 23 and continuing through Sept. 21 in the West Hall of the Library, tells the story of Johnson’s life and achievements through a display of rare books, manuscripts, and portraits drawn from The Huntington’s holdings and from the Loren and Frances Rothschild Collection. The exhibition is curated by noted Johnson scholar O. M. “Skip” Brack, professor emeritus of English at Arizona State University.

One of the earliest English authors to make his living solely by his writings, Johnson spent his early years, after arriving in London in 1737, writing mostly for the Grub Street booksellers. Needing a large project that would produce a steady income, he accepted a commission to write an English dictionary. On April 15, 1755, after Johnson had labored over it for nine years, a consortium of London booksellers published, in two large volumes, A Dictionary of the English Language: In which the Words are Deduced from their Originals, and Illustrated in their Different Significations by Examples from the Best Writers. This colossal achievement brought Johnson fame not only in England but across Europe.

A first edition of the Dictionary in its original binding will be one of the highlights of the exhibition. Other treasures to be displayed are the famous “Blinking Sam” portrait of Johnson by his friend Sir Joshua Reynolds, a portion of one of Johnson’s diaries, and a number of personal letters.

Johnson’s prolific output as a writer included his famous poem The Vanity of Human Wishes (1749), more than 200 essays for his twice-weekly publication, The Rambler (1750–52), and the allegorical fable Rasselas: The Prince of Abyssinia (1759). His edition of Shakespeare (1765) and the Lives of the Poets (1779–81) secured his fame as a literary critic and biographer.

Brack notes that while Johnson could occasionally be difficult and argumentative, his work reveals a deeply compassionate nature. “All of Johnson’s writings, although not often personal in an autobiographical sense, have the touch of his humanity—an essential understanding of the trials and joys of life that we all share.”

Lecture: “Samuel Johnson and His Famous Dictionary”
May 27 (Wednesday) 7:30 p.m.
Loren Rothschild, a noted collector of the works of Samuel Johnson, will talk about how Johnson created his great dictionary.

Lecture: “Johnson Agonistes: Portraying Samuel Johnson”
June 8 (Monday) 7:30 p.m.
Richard Wendorf, Stanford Calderwood Director and Librarian of the Boston Athenaeum, will survey all of the known portraits of Johnson, including the famous portrait by Reynolds now at The Huntington.

All lectures take place in Friends’ Hall and are free to the public.
No reservations required.