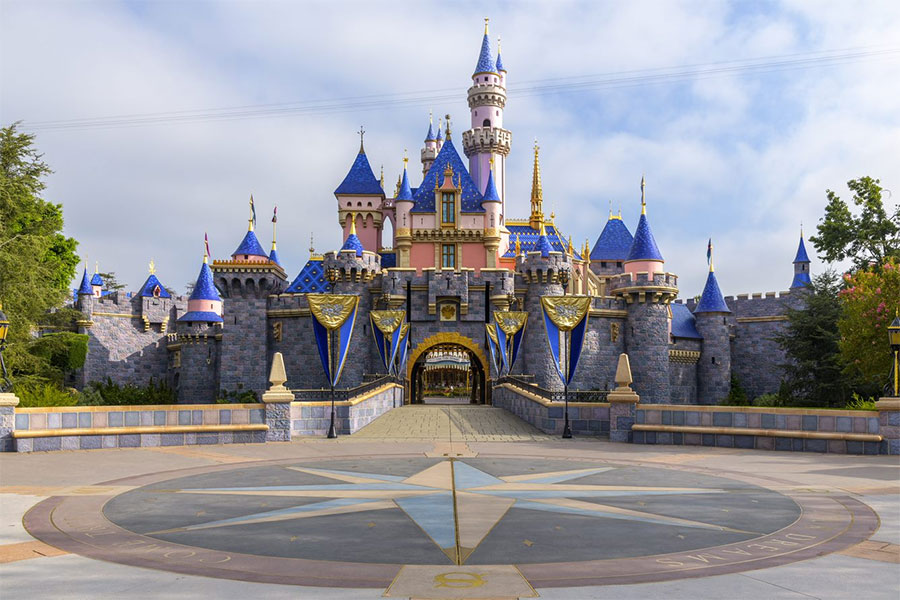 The Huntington Library, Art Museum, and Botanical Gardens is presenting the international traveling exhibition “Inspiring Walt Disney: The Animation of French Decorative Arts” through March 27, 2023. Organized by the Metropolitan Museum of Art in New York and the Wallace Collection in London in association with The Huntington, the exhibition explores the early inspirations behind Disney Studios’ creations, examining Walt Disney’s fascination with European art and the use of French motifs in Disney films and theme parks.

Approximately 50 works of 18th-century European decorative art and design, many of which are drawn from The Huntington’s significant collection, are featured alongside hand-drawn production artworks and works on paper from the Walt Disney Animation Research Library, Walt Disney Archives, Walt Disney Imagineering Collection, and The Walt Disney Family Museum. The following excerpt is from the exhibition catalog by Wolf Burchard, associate curator of European sculpture and decorative arts at The Met.

There is little exaggeration in historian Richard Snow’s statement that the Sleeping Beauty Castle has become a sight “as familiar to the world as the Eiffel Tower.” The “wienie”—Walt Disney’s sobriquet for architectural focal points—went through innumerable iterations and appellations: Robin Hood’s, Snow White’s, Cinderella’s, and Fantasyland Castle. By the time Disneyland opened on July 17, 1955, the decision had been made to label it after Sleeping Beauty, thus turning it into a giant promotional placard for a film that would not be released for another four years. The final version of the theme park’s folly bore de facto minimal resemblance to the castle designed for the animated feature by Eyvind Earle. Earle, incidentally, had suggested that each turret of the Disneyland castle should be of a different color. Instead, it was painted in pastel shades of pink applied in subtle gradations to help create the illusion of the building as standing taller than its actual height of seventy-seven feet. Disney’s John Hench, who suggested the Unicorn Tapestries as a model for the look of Sleeping Beauty, developed the palette of pinks for this first Disney theme park castle as well as some of the subsequent ones, always taking into consideration the local atmosphere and color of the sky. The dominance of pink might seem at odds with the fortified nature of the architecture. Hench’s intention was to make the building appear more inviting and less intimidating. “It’s the quintessential fairytale castle color,” states Kim Irvine. Mentored by Hench, Irvine has been working for The Walt Disney Company since the 1970s and has overseen several overhauls of the castle’s color scheme, which has gained considerably in saturation over the last six and a half decades. “We had the strongest pink for the fiftieth birthday of Disneyland and used a lot of gold and glitter flakes,” she remembers. 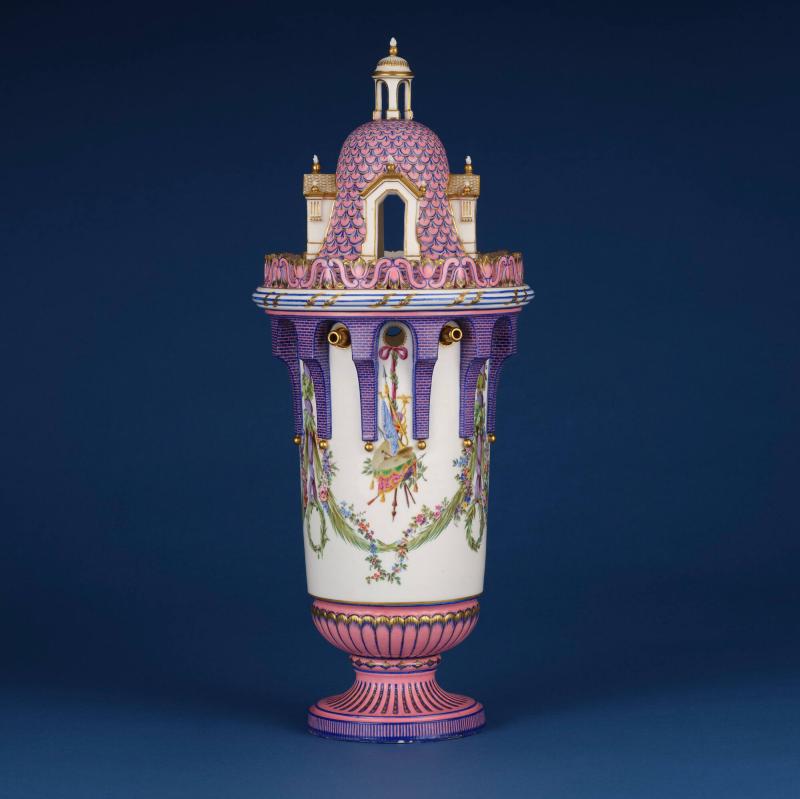 Irvine, whose work follows in the footsteps of Mary Blair and Eyvind Earle, perpetually seeks to improve the appearance of the buildings in Disney’s amusement parks, conducting what she calls “subliminal storytelling that tells people what’s inside.” Refreshing the various castles so that they do not look tired or out-of-date, without alienating Disney’s colossal and at times opinionated fan base, can prove a challenge. Expressions of strong views with regard to the “right” color—especially pink—may recall the sartorial battle between the fairies Flora and Merryweather in dressing Aurora, the Sleeping Beauty in Disney’s eponymous film. In seventeenth- and eighteenth-century Europe, color had little place in exterior architecture. During his 1665 sojourn to Paris, Sir Christopher Wren snubbed the corrupt external appearance of the “Palace, or if you please to call it, the Cabinet of Versaille. … The mixture of brick and stone, blue tile and gold, make it look like a rich livery.” Color belonged indoors and was to embellish the ephemeral: food, fashion, porcelain, and furniture. A pair of exceptional Sèvres tower vases with radiant pink lids indulge in the artistic license of polychromy that Wren abhorred for permanent architecture. They are the Rococo counterpart of Disney’s Sleeping Beauty Castle. The fortified towers, complete with buttresses, cannons, and dormers, belonged to a three-part garniture sold in April 1763. It comprised a remarkable centerpiece adorned with goats’ heads on either side, the largest type of pot pourrit Sèvres ever produced. It is not recorded who bought this expensive garniture. Each tower cost the substantial sum of 600 livres—but the vases’ martial imagery and great cost, resulting from their sheer scale and the refinement of their painted decoration, may suggest that the set had been destined for one of France’s senior military officers. The duc de Choiseul, war minister to King Louis XV and one of the most sophisticated collectors in eighteenth-century Paris, comes to mind. Yet, the timing of a showstopper of this caliber appears at odds with France’s loss of the Seven Years’ War two months earlier, in February 1763. This may explain why whoever commissioned or purchased the pieces remains anonymous to this day. In the end, it may well have been acquired by one of the many Englishmen such as the Earl of Coventry who, in the immediate aftermath of the war, hastily sojourned to Paris for extended shopping sprees. 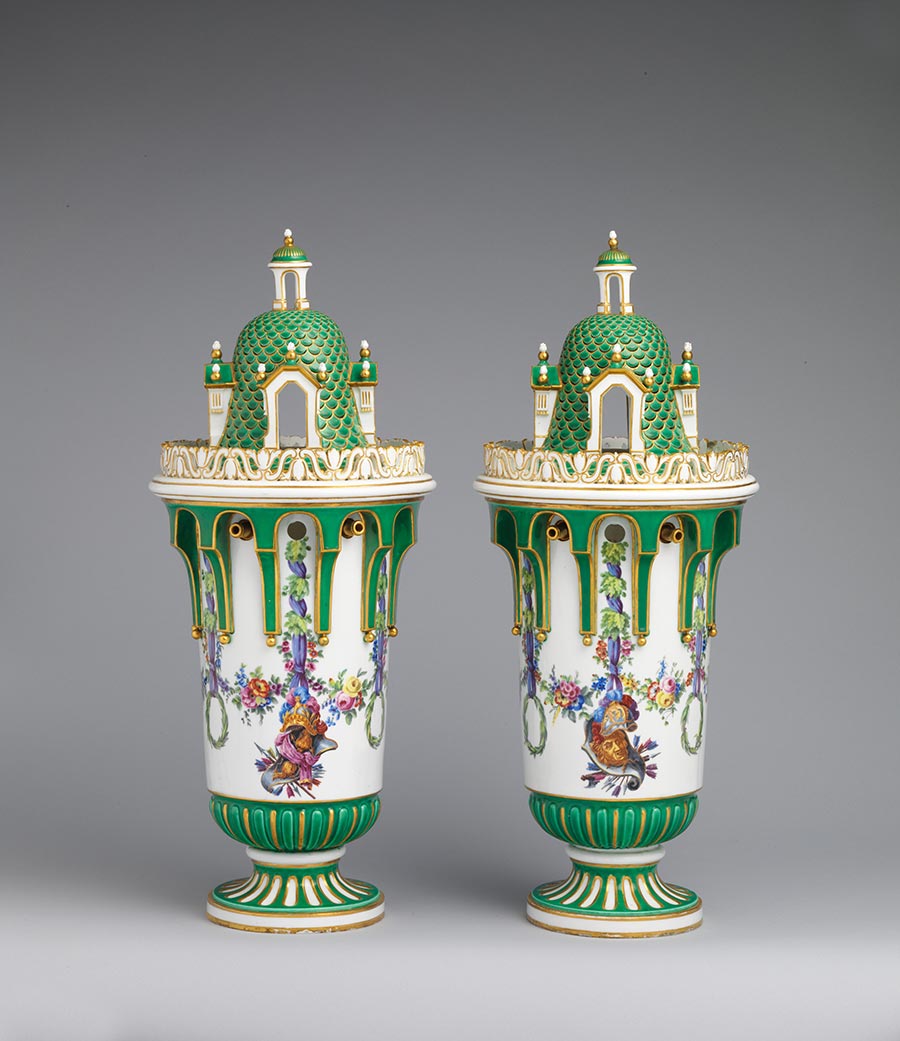 The tower vases’ molds were first listed in Sèvres’ 1762 inventory of shapes as “moules nouveaux de la tour” (new tower-shaped molds) and designed under the leadership of the manufactory’s director of sculpture, Etienne-Maurice Falconet, creator of The Magic Lantern and Menacing Cupid visually referenced in Fragonard’s The Swing. The garniture is now in the collection of The Huntington in San Marino, California, the central pot pourrit missing its lid. The only other known centerpiece of this model, though painted in lapis blue, is preserved in the Rothschild Collection at Waddesdon Manor, Berkshire, while the only other pair of vases en tours (tower vases) painted green was presented to The Met in 1956. As opposed to The Huntington’s pair, The Met’s remained with Sèvres, as indicated by the factory’s 1770 list of unsold stock. Both continue to stand as superlative technical tours de force. As Jeffrey Munger recently elucidated, the tower vases “reflect the Sèvres factory’s interest in the creation of extraordinary objects that had no precedent in the medium of ceramics.” He further pointed out that while for large dinner services it was economically impossible “to constantly invent new forms for all of the components,” for more decorative items, such as vases, “the factory was able not only to respond quickly to changing fashions, but also to demonstrate its ability to push the boundaries of ceramic design.” 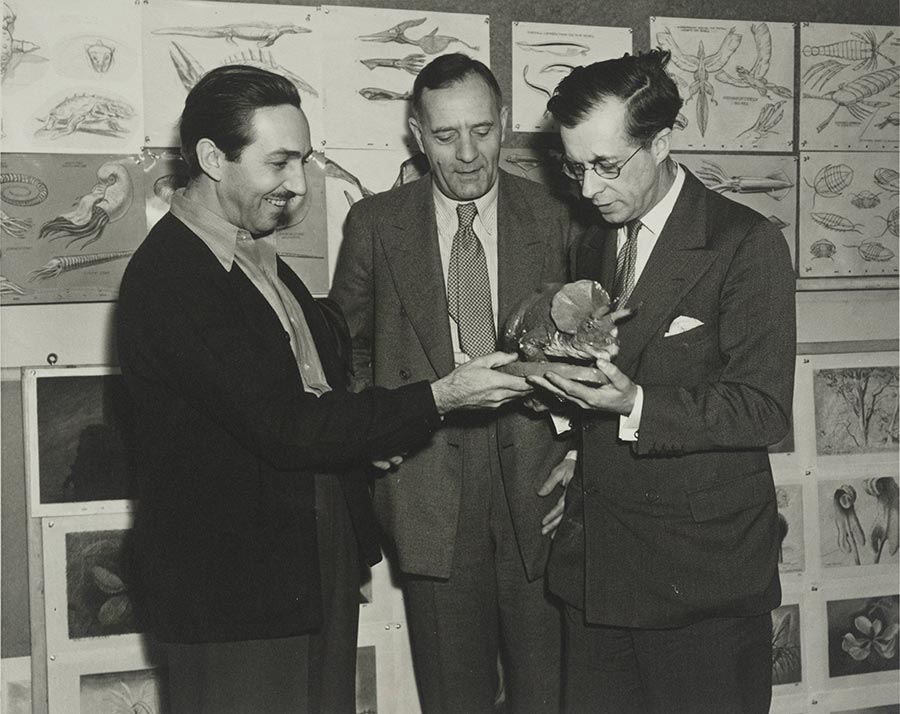 Left to right: Walt Disney, Edwin Powell Hubble, and Sir Julian Huxley looking at a dinosaur model at Disney Studios in Burbank, California, on Oct. 24, 1940. © Disney. Mounted on the wall behind the men is a display of drawings relating to the opening of the Fantasia segment “Rite of Spring,” based on Igor Stravinsky’s 1913 ballet, and retracing the evolution from the Big Bang to the extinction of the dinosaurs.

Part of what makes the Huntington turrets so intriguing for modern viewers is the presumed incompatibility of their bright pink color scheme in combination with pictorial references to the realm of military trophies and fortified architecture. For most of the twentieth century, pink was closely connected with female fashion and accessories. Its rising popularity in the mid-eighteenth century was championed by none other than Madame de Pompadour. She no doubt furthered the color’s associations with female sensuality, desire, and charm; yet pink was equally acceptable if less popular for masculine courtly attire—a sartorial freedom echoed in several costume studies for Disney’s Beauty and the Beast. Still, the color’s consistent presence in dress and decorative arts, as well as in painting, was not without its critics. Cassandra Albinson cites the example of Jean-Baptiste Marie Pierre, principal painter to King Louis XV, who grew increasingly frustrated at the obsession of the French with pink and how it corrupted the work of an entire generation of artists coming back “from Italy with color and vigor, which they lose little by little, driven by the need to please a nation that wants everything colored pink.” In 1757, Jean Hellot, director of the French Royal Academy of Sciences and general inspector at Sèvres, entrusted to improve the manufactory’s modes of production, invented the ground color “fond rose” (known as “rose Pompadour” in common parlance), found on both The Met’s elephant vases and the Huntington towers. Depending on the colors by which Hellot’s pink is surrounded—blue highlights on the turrets and golden ones on the elephants—the tonality can appear to vary from orange to purple, even though it remains the exact same shade. 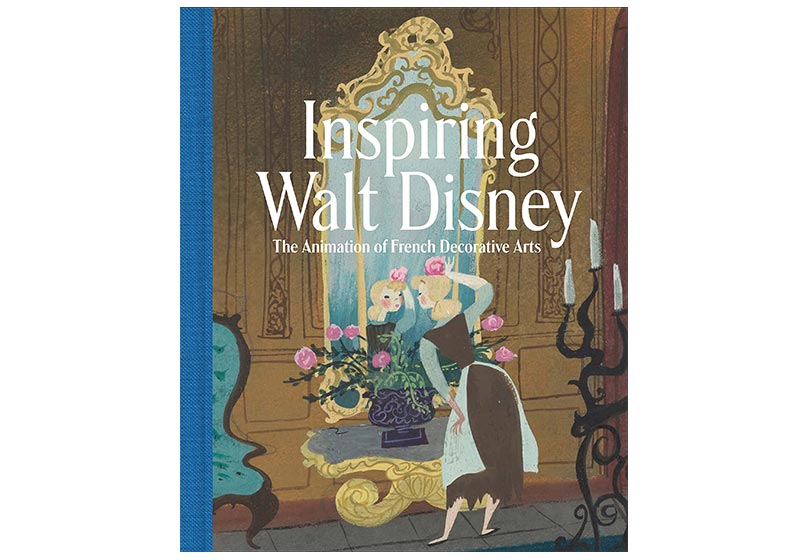 Cover of Inspiring Walt Disney: The Animation of French Decorative Arts by Wolf Burchard. | © The Metropolitan Museum of Art.

The tower vases impart a playfulness and sense of fun that are akin to the castles erected as urban focal points at several Disney theme parks. It would be a stretch to claim that Disney, Hench, or Ryman knew the pink vases. Nonetheless, one can assume that at some point each of them would have visited The Huntington and its popular botanical gardens, a short jaunt from their studios in Burbank. The Huntington preserves a photograph dated October 24, 1940, that shows Edwin Hubble, one of the museum’s trustees, at the Disney Studios next to Walt in the process of handing over a miniature model of a triceratops to the evolutionary biologist Sir Julian Huxley. Mounted on the wall behind them is a display of drawings relating to the opening of the Fantasia segment “Rite of Spring,” based on Igor Stravinsky’s 1913 ballet, and retracing the evolution from the Big Bang to the extinction of the dinosaurs. Apart from the Museum of History, Science and Art, The Huntington was the only other public gallery in the metropolitan area of Los Angeles where Disney and his artists could have seen old master paintings and decorative works of art—neither the Los Angeles County Museum of Art nor the J. Paul Getty Museum had been founded yet. So, while it is unlikely that Disney’s castle took immediate inspiration from The Huntington’s Sèvres towers, it is reasonable to maintain that they share creative roots and intentions.

To read more, you can purchase the exhibition catalog, Inspiring Walt Disney: The Animation of French Decorative Arts, in person or online from the Huntington Store.

Wolf Burchard is the associate curator of European sculpture and decorative arts at The Metropolitan Museum of Art, New York.