Once the house of Henry E. Huntington (1850–1927) and his second wife, Arabella (1850–1924), the Huntington Art Gallery opened in 1928 displaying one of the greatest collections of 18th-century British art in the country, including the celebrated Blue Boy by Thomas Gainsborough and Pinkie by Thomas Lawrence. Since then the collections have grown enormously and now contain many great works of art of the Italian, French and Netherlandish schools, as well as a broader range of British art and design. The Huntington Art Gallery currently displays approximately 1,200 objects of European art from the 15th to the early 20th century. When the finishing touches were put on Henry E. Huntington’s San Marino villa in 1911, it was proclaimed one of the finest in Southern California, and a major achievement by architects Myron Hunt and Elmer Grey. 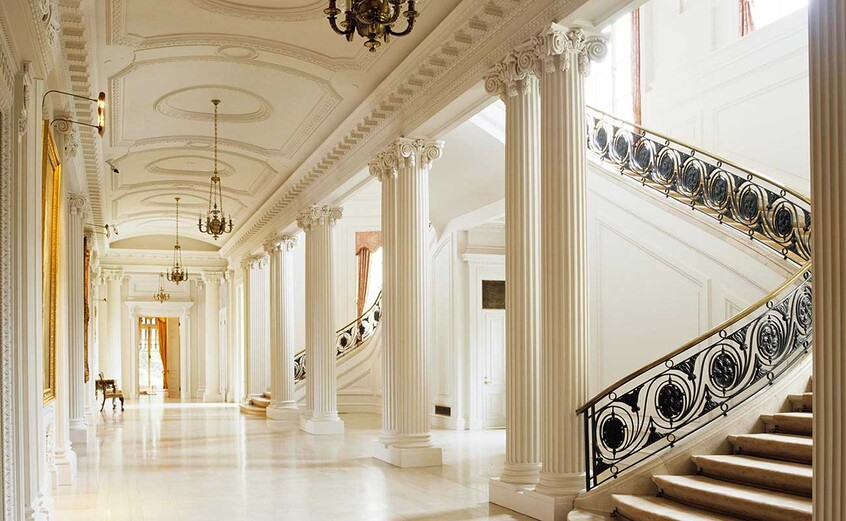 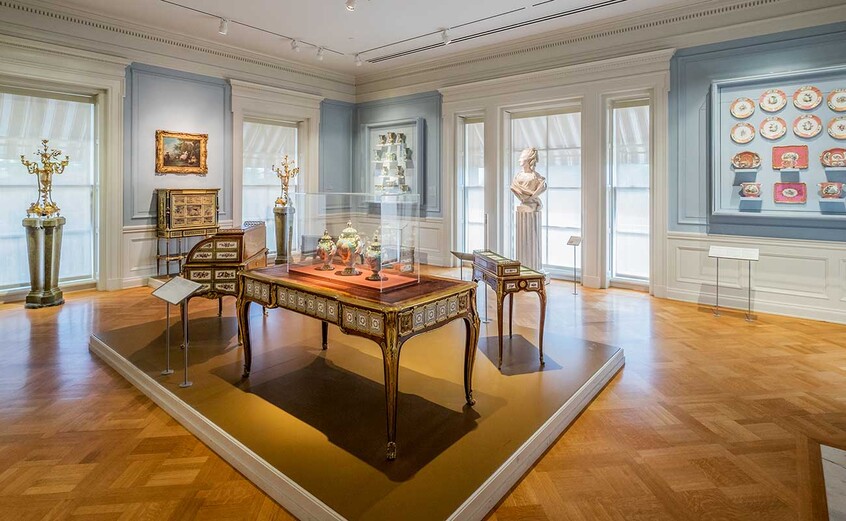 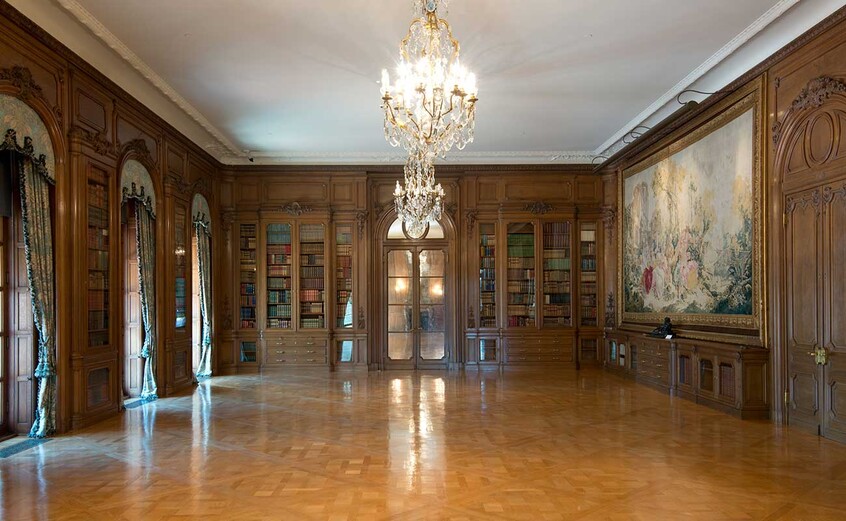 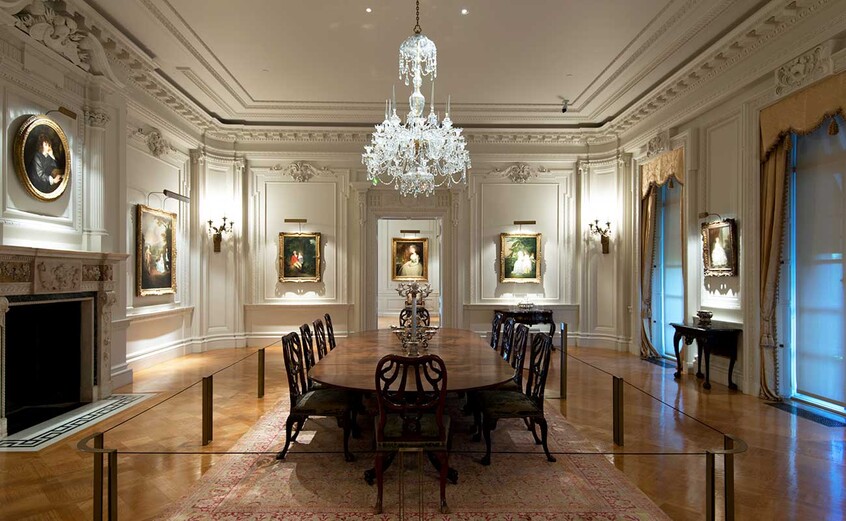 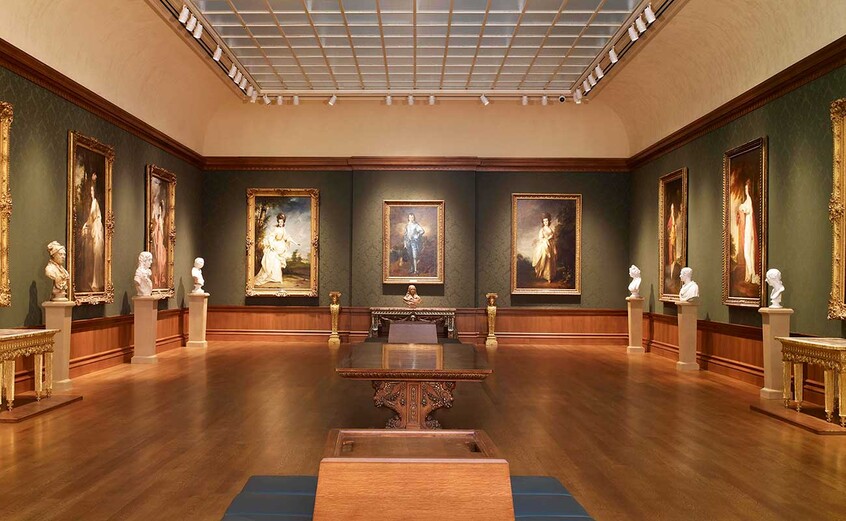 The Huntington Art Gallery's function is twofold: to display the Beaux-Arts mansion as one of the great Gilded Age residences of America, evoking something of the lifestyle of the Huntingtons, and to provide educational displays of major works of art, taking advantage of modern techniques of conservation, lighting and interpretation.

In 1905, railroad and real estate magnate Henry Huntington commissioned an engineer E.S.Code to translate his own simple sketch of what he wanted into a buildable design. By 1908, when he asked the distinguished Los Angeles architect Myron Hunt to take the project forward, he was already being influenced by the taste of his uncle’s widow, Arabella Huntington, whom he would marry in 1913. Retaining many of the features of the original plans, Hunt’s design subtly raised the game, removing Code’s neo-Palladian mannerisms, and restricting exterior classical ornament to the main compositions of the north and south fronts. To these he added a small porte cochere for the main entry, and – on the client’s insistence – the large peristylar loggia on the east, which to this day remains the building’s most distinguished architectural feature.

Ultimately, the building plan came to some 55,000 square feet, with the south façade and terrace reflecting Italian and Spanish Renaissance traditions of country house architecture, and the north façade, with its corps-de-logis and advancing wings, acknowledging the French tradition. As a whole, the house is a classic exercise in the emerging Mediterranean style of early-20th-century Californian architecture.

The entry on the north is deliberately understated providing functional spaces to accommodate visitors with parcels and luggage. As is typical in advanced country house architecture of the late 19th century, the real elegance is saved for the private part of the house—the great east-west hall, the large library, drawing rooms, dining room, and the expansive south terrace. All these have survived the transformation of the house into a public art gallery in the late 1920s, and have in the recent re-organization of the house been re-emphasized. Spaces such as bathrooms, many of the bedrooms, and private sitting rooms, the servants’ wing, were largely lost when the gallery opened to the public in 1928, a year after Henry’s death.

Highlights include a first-floor small library, the room originally designed as Mr Huntington’s ‘den’ where he could meet with visitors or business callers without bringing them into the private rooms. Though richly decorated, the large library was also a functional space; Huntington spent many hours reading there. The small and large drawing rooms were for entertainment, furnished with 18th-century French decorative art objects and British portraits. These spaces were planned for recreational moments—for playing cards, conversation, or listening to music.

Although the Huntingtons did not lead the expansive social life for which the house was designed, the dining room was nevertheless suitable for important functions. One such occasion was a dinner for the Crown Prince and Princess of Sweden, who visited the Huntington mansion in the early 1920s.

A 2,900-square-foot hall was added in 1934 for displaying the Huntington's Grand Manner portraits. Now called the Thornton Portrait Gallery, the addition followed a trend begun with the Wallace Collection in London, and followed almost 20 years later by the trustees of The Huntington and the Frick Collection in New York, as a suitable way of converting grand private houses into art museums.