Tropical Species in a Jungle Setting

The Jungle Garden features a high forest canopy, an understory of trees and shrubs, climbing vines, and leaves of giant proportions. Plants commonly associated with the tropics grow here, including orchids, bromeliads, gingers, ferns, palms, bamboos, and many members of the calla lily family, such as philodendrons. 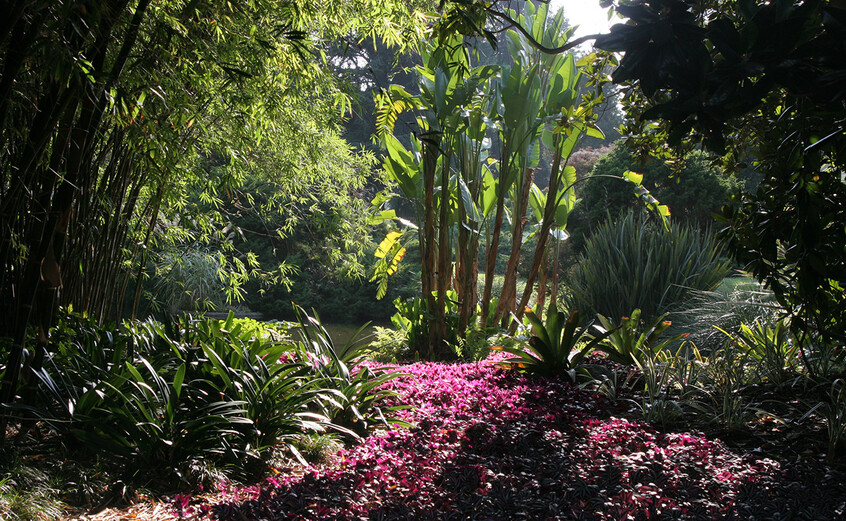 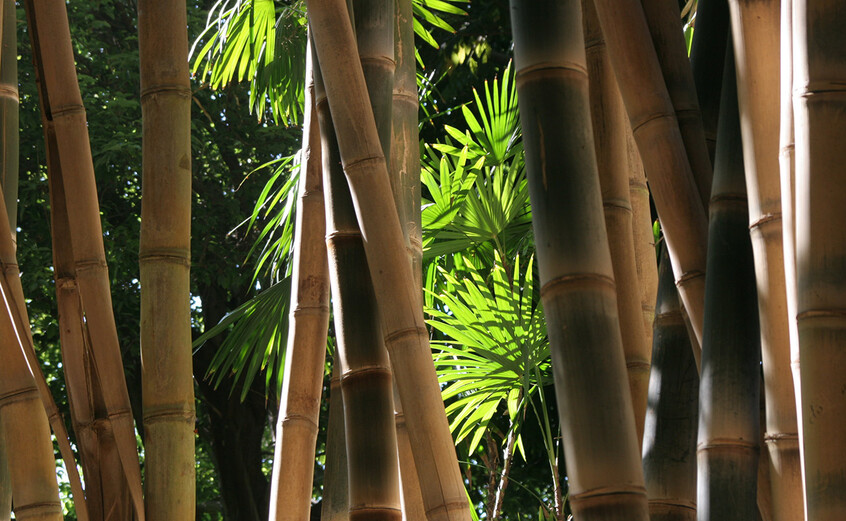 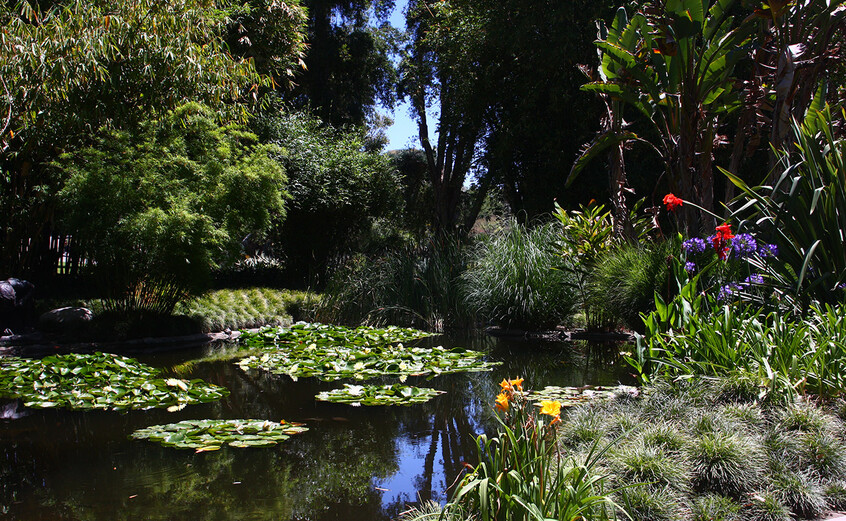 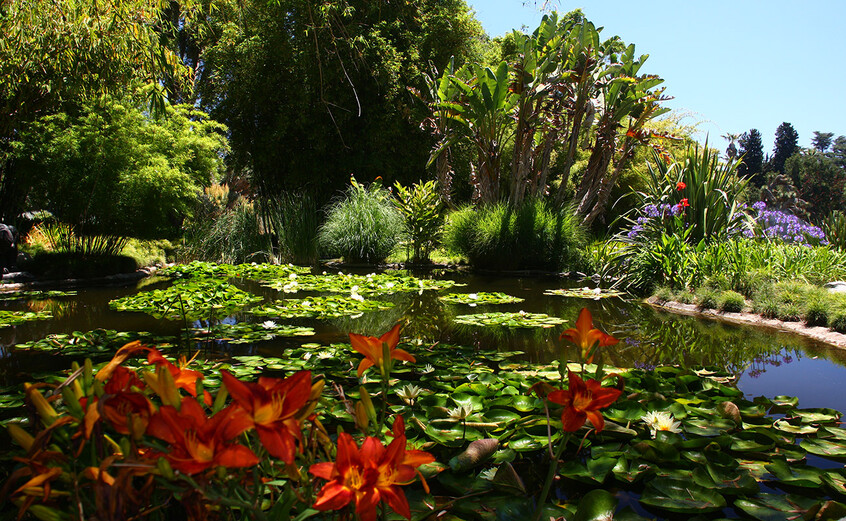 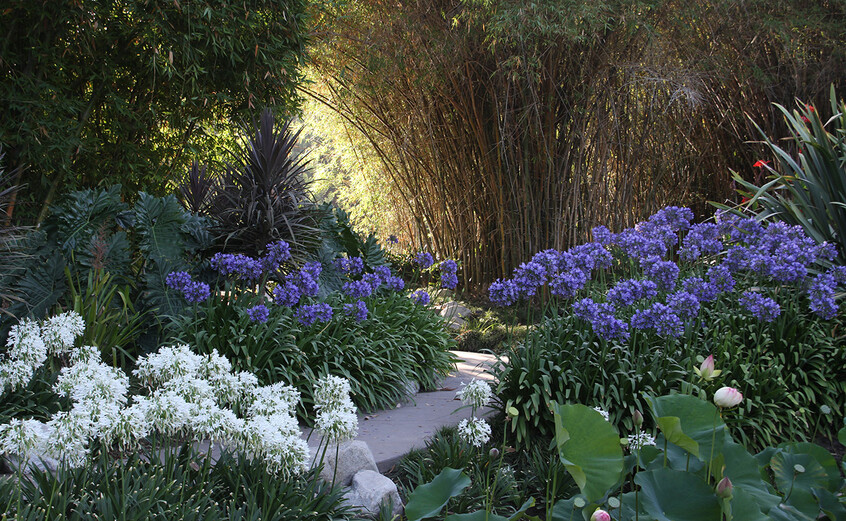 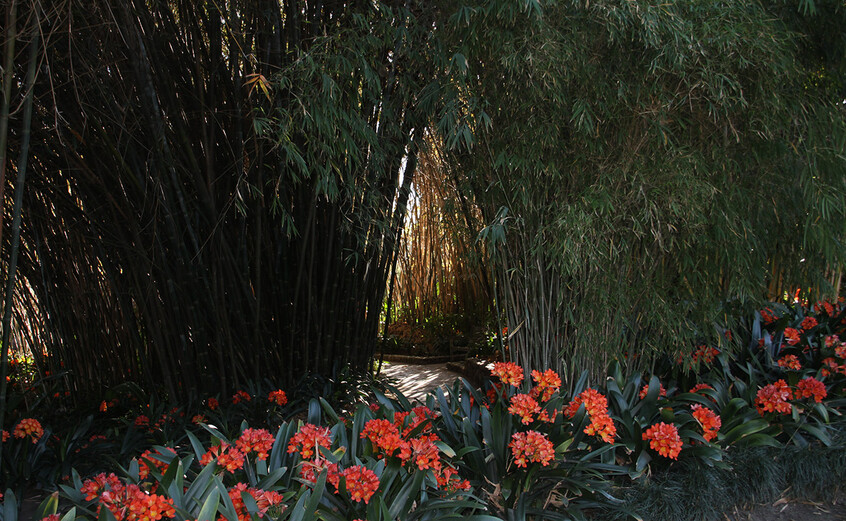 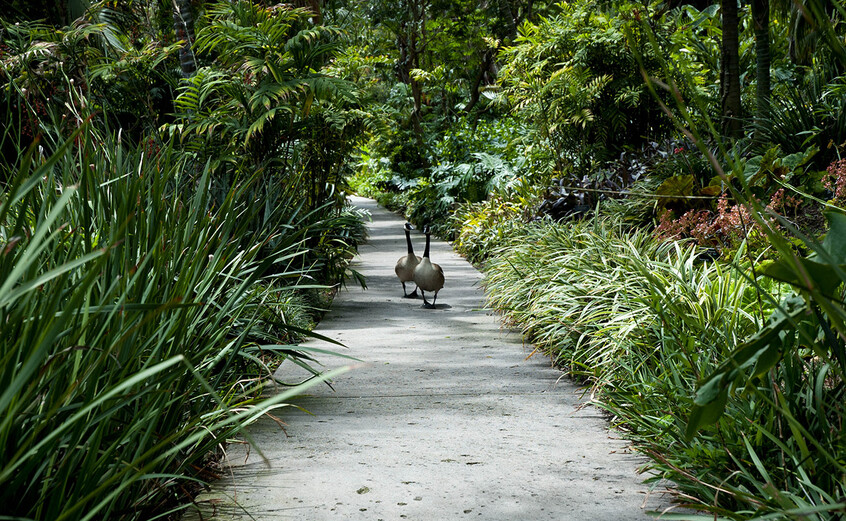 Bromeliads are more often thought of as houseplants, but they are good landscape plants. The fruit and flower clusters of the fishtail palm (Caryota spp.) can grow ten feet long. They bloom only once, then die. Giant-leaved elephant ear plants grow near the waterfall. At the bottom of the garden is the Ombu tree (Phytolacca dioica), one of five plants received from the U.S. Department of Agriculture in 1914, grown from seed received from the Buenos Aires Botanical Garden in 1912. An unofficial emblem of Argentina, the tree has an enormous swollen base that evolved to help it cope with grass fires, winds, and scarce rainfall. The rare bamboo Dendrocalamus asper from south Asia can grow from fifty to over one hundred feet tall. Of the many different kinds of bamboo, it is one of the tallest.

The luxuriant leaves of the strawberry snowball tree sometimes hide its lovely pink flowers. As these fall to the ground during its winter blooming season, they create a carpet of pink around the tree. Visitors may spot this native of Madagascar at the southeastern edge of the Jungle Garden.

The canopies of tall trees, mostly Ficus species such as Ficus thonningii (Thonning's Fig), protect plants below that are sensitive to frost and sun.

In their natural habitats, epiphytes such as bromeliads, ferns, and orchids have unusual adaptations; unlike parasites, they grow on other plants without harming the host. They obtain their nutrients from bird droppings, plant debris, and dust, and their water from rain, fog, and dew. In the Jungle Garden they are mostly grown as terrestrial plantings.

Ferns produce no flowers, seeds, or cones. Their sexual cycle depends on the production of spores on the undersides of the leaves and the growth of a plantlet. Tree ferns have perennial stems and are not capable of increasing in diameter.

Cycads are ancient plants with a fossil history reaching back a quarter billion years. They range from small plants with underground stems to large plants with trunks that may reach more than sixty feet in height. Cycads are gymnosperms (plants with "naked seeds" not enclosed by an ovary), reproduce by cones, and are dioecious. Cones are either male or female and are never found together on the same plant. Cycads have three types of roots: 1) taproots, 2) secondary roots, and 3) coralloid roots (specialized roots near the soil surface containing blue-green algae that help in nitrogen fixation).

Palms are monocots, which means that their seeds have one seed leaf, called a cotyledon. Palms do not have secondary thickening and are the largest monocotyledons found in most tropical forests. Most palms in the Jungle are shade-loving. Some of the species found in the Jungle Garden are Caryota urens, Howea forsteriana, Archontophoenix cunninghamiana, and more. Understory jungle palms, especially Chamaedorea spp., native to tropical America--the Bamboo Palm (C. seifrizii) and Parlor Palm (C. elegans)--are popular houseplants. The palms in the Jungle Garden are from more tropical areas and are less sun tolerant compared with those in the Palm Garden.