The first garden established in 1904 by William Hertrich had natural springs that emerged from rocks on the Raymond Hill Fault. The solution to an unsightly gully in the southeast corner of the gardens, the four acres that make up the Lily Ponds were a perfect place to build two large and three small ponds. The pond water, which is circulated and recycled, is home to turtles, bullfrogs, Japanese koi, aquatic plants, and an occasional mallard family. 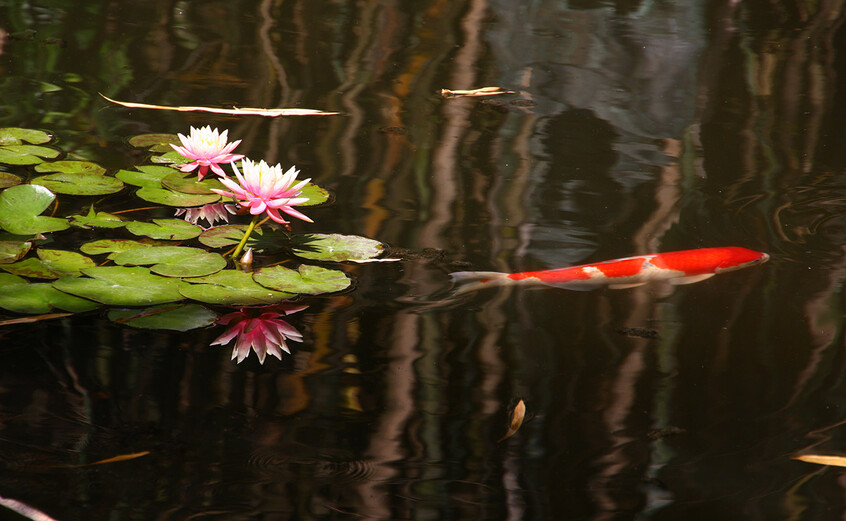 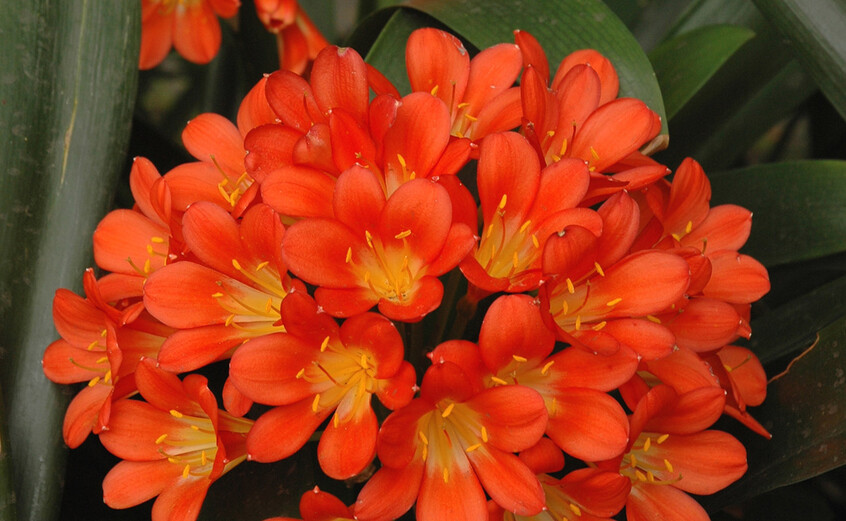 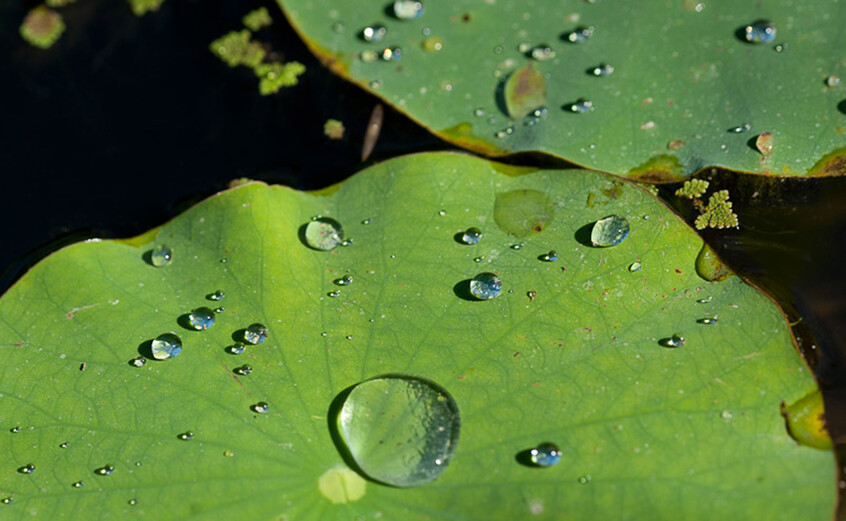 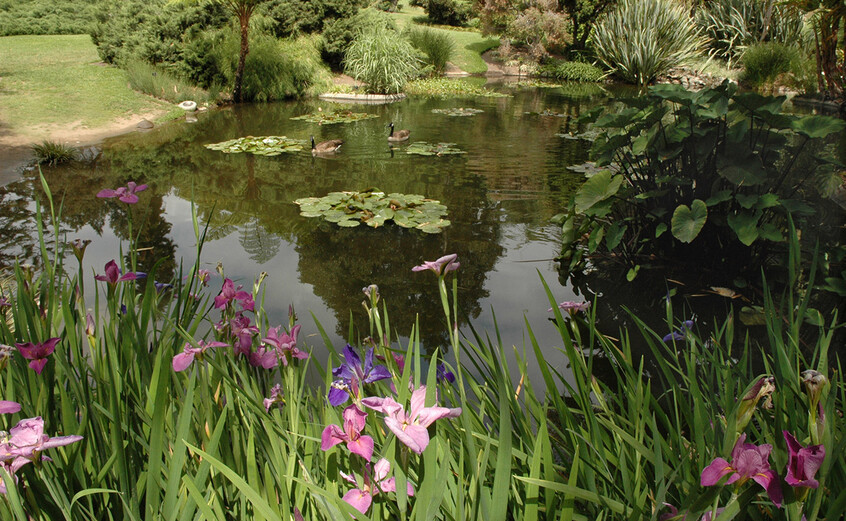 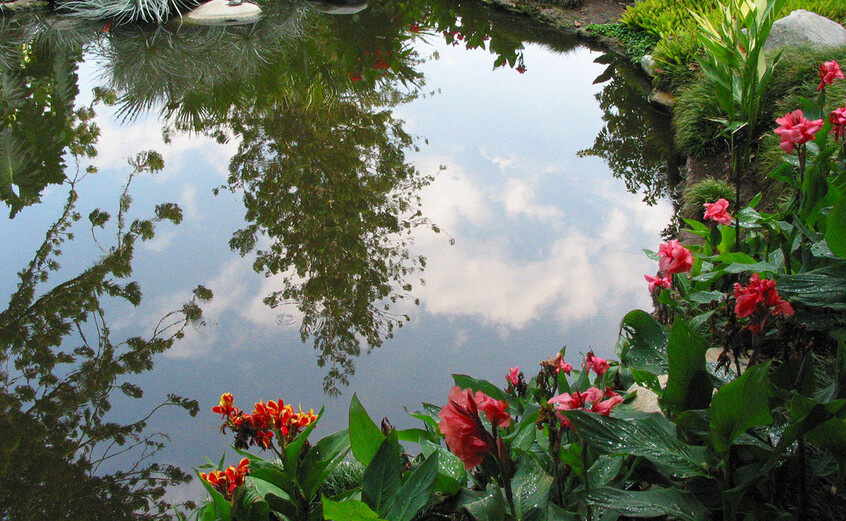 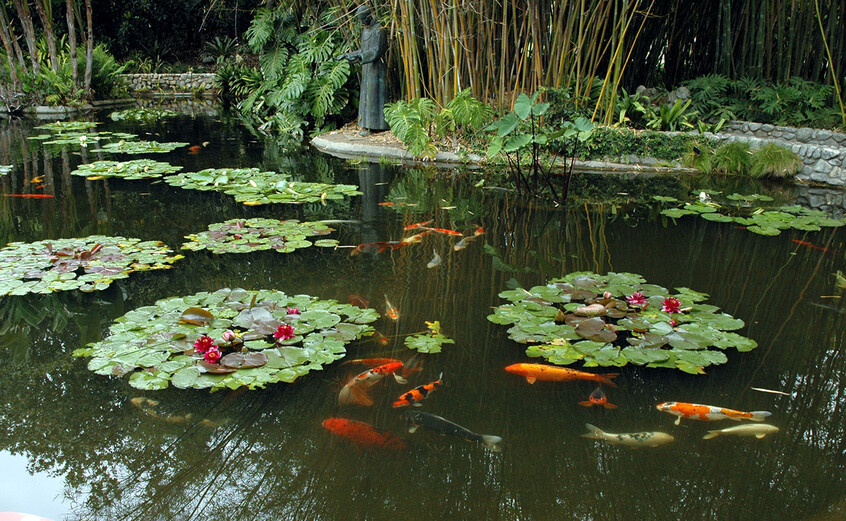 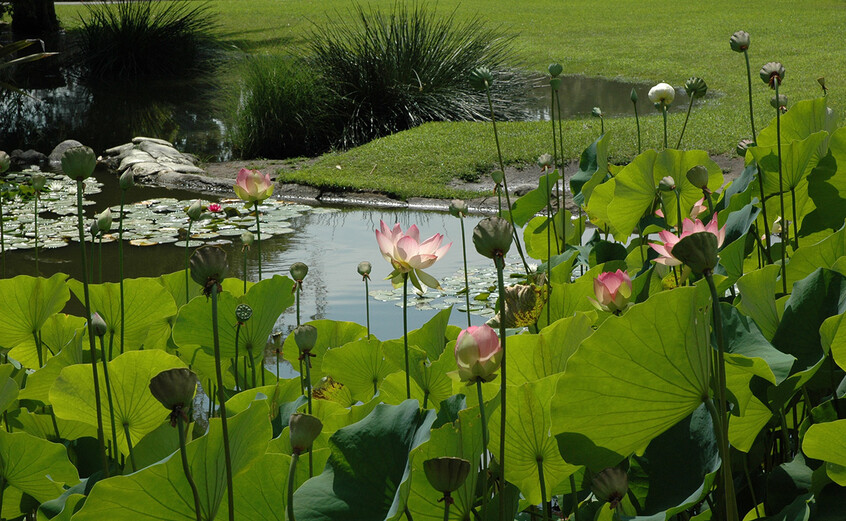 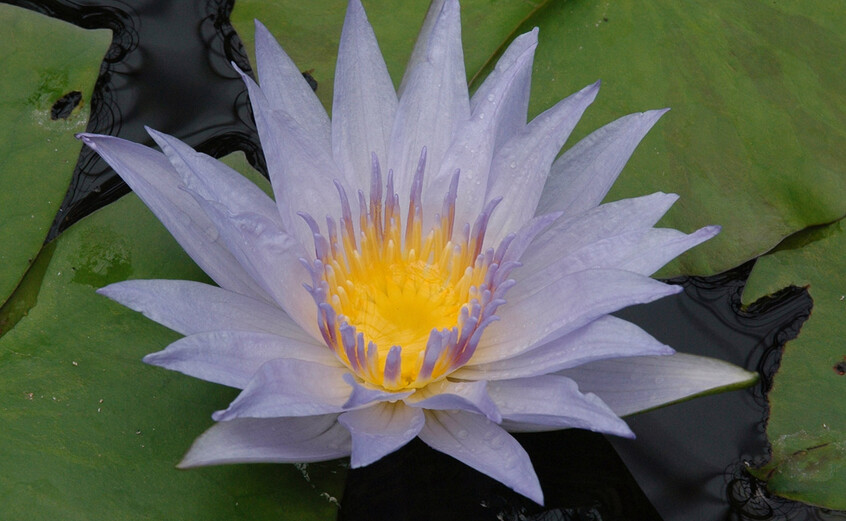 The bronze St. Francis, patron saint of animals, was sculpted by Clara Huntington (Henry's daughter), cast in 1924-26, and bequeathed to the Huntington in 1965. Two other sculptures at the east side of the lily ponds were purchased by Mr. Huntington in 1910. One is a stone fountain ornament depicting a seahorse emerging from an acanthus leaf, and the other is a gothic vasque (stone basin) on eight columns from the 15th century.

After centuries of cultivation, today’s water lilies are a mixture of many cultivated kinds. They bloom in various hues from mid-spring through mid-autumn. Along the shores of the uppermost pond is the very same species of papyrus (Cyperus papyrus) that was used to make writing paper in ancient Egypt. Don’t miss the summer-flowering lotus (Nelumbo nucifera), which usually blooms in mid-July. First planted here in 1905, these magnificent relatives of the water lily unfurl pink and white flowers eight or nine inches wide.

West of the ponds is the conifer collection with several landmark trees, including one known to be the largest specimen in the United States: Taiwania cryptomerioides, a redwood relative native to Taiwan and China, planted about 1908. Another landmark, the Dawn Redwood (Metasequoia glyptostroboides), had been known only from fossils until the discovery of a living tree in 1948. Native to a small area of China, it is a relative of California’s coast redwood (Sequoia sempervirens).

Other notable trees to look for in this area are the araucarias, tall cone-bearing trees native to South America, the Pacific Islands, and Australia, and two groves of Montezuma Cypress (Taxodium mucronatum).

The Huntington grows more than seventy-five kinds of bamboo. Several species form dense groves and passages around the lily ponds. Most are clump-forming, which send out underground stems, called rhizomes, a short distance before sending up vertical stems; a few are running, which also send out underground stems but for a longer distance. Two large stands of Punting-pole and Beechey bamboo are prominent west of the lower ponds. Among the clumps of Beechey bamboo at the lower ponds is a specimen received in 1906 as one of Henry Huntington’s first garden acquisitions.

Conifers (gymnosperms) differ from flowering plants (angiosperms) in that their reproductive parts are in cones rather than flowers. Separate cones house the pollen (male reproductive cells) and the ovules (female reproductive cells). Conifers have wind-borne pollen and after fertilization the seeds are produced on the female cones. The Lily Ponds conifer collection aims to display a diversity of conifer genera, a theme that continues westward through the New Zealand collection and lower Australian Garden.

Bamboos are in the grass family, Poaceae. After bamboo culms emerge, they expand in height, not in diameter. Bamboos can reach their ultimate height in 2 to 4 months, depending upon the species. They flower infrequently and the same species will flower simultaneously wherever it occurs in the world. The Lily Ponds’ bamboos are mostly tropical and clumping and some are many decades old. Examples include Bambusa tuldoides, B. beecheyana, B. oldhamii, B. multiplex ‘Variegata’, Dendrocalamus brandesii (tallest species in the world), and Indocalamus tesselatus (largest leaves of bamboos).

Aquatic plants along the pond edges like wet roots but can tolerate flooding and short dry spells. Examples include Juncus, Phormium, swamp iris, Miscanthus, and dwarf papyrus. Emergent plants grow in shallow water with roots and part of stems underwater And leaves, stems, flowers, and seeds above water. Examples include water lilies and lotus. Free-floating plants are small, even tiny, and do not stay in one place. Their tiny roots do not reach the bottom of the pond. Examples include water hyacinth and water lettuce. Submerged plants grow entirely underwater and are rooted in the bottom mud. They can grow in shallow water if there is enough light