Jill Mulleady’s paintings present unsettling scenes that oscillate between beautiful and horrifying, quiet and violent. Her compositions are rich with allegorical symbols and art historical references that conflate eras. Even when depicting a particular location, they feel liminal and otherworldly. She populates these ghostly worlds with recognizable figures: poets, writers, and artists, rendered with their bodies contorted and their flesh a sickly hue. Mulleady often intervenes in the spaces in which her paintings are installed, staging them alongside readymades and architectural interventions. This strategy turns the gallery space into a kind of proscenium, heightening the theatricality of viewing. Her approach is inspired in part by the experimental theater director Antonin Artaud, who strived for a “communion between actor and audience in a magic exorcism.”

Mulleady’s four paintings respond both visually and conceptually to their setting in The Huntington’s American Art Galleries. In a scenographic gesture, her diptych Interior of a Forest—an appropriation of a work with the same title by Paul Cézanne (ca. 1885)—stages Zenobia in Chains (1859), the marble sculpture by Harriet Goodhue Hosmer from The Huntington’s collection, in a burning trail. In dialogue with Zenobia, Mulleady takes Henry Fuseli’s painting The Three Witches (ca. 1785) as a subject matter and reproduces it, adding the flash glare of a photograph. Acquired by The Huntington for its European collection, Fuseli’s painting depicts a pivotal moment in Shakespeare’s tragedy Macbeth (act 1, scene 3), when the protagonist encounters a demonic trio of witches, who foretell his fate. The text originally engraved in the frame is here replicated in trompe l’oeil, quoting in ancient Greek the playwright Aeschylus: “Not women, but Gorgons I call them,” a reference to Medusa and her sisters, whose terrifying gazes turned men to stone. The final work, What’s Lost in the Fight, is inspired by the memory of a painting Mulleady saw as a child at the Museo Nacional de Bellas Artes in Buenos Aires: La Vuelta del Malón (The Return of the Indian Raid) by Argentinian painter Ángel Della Valle (1892), which depicts a group of indigenous people in the Pampas on horses looting villages and capturing a white woman. This depiction was an inaccurate and symbolic inversion of the historical terms of conquest and dispossession; in reality, the majority of invasions, imprisonments, and exterminations were carried out by colonial armies. At the time, the painting served to validate colonization by vandalizing the figure of the Native. Mulleady’s revision takes place at sunrise during the clearing of a storm and the seeming aftermath of a battle. The horses appear ungovernable; triggered by the forces of nature, they attack one another. The human figures from Della Valle’s painting are removed, and at the far left, an old woman stands apart from the group, as if practicing a shamanic act, while a running coyote stares directly at the viewer, including them in the violent scene.

In Made in L.A. 2020: a version, the artist's work is present in two institutions, across Los Angeles. See Jill Mulleady's work on view at the Hammer.

BIOGRAPHY
Jill Mulleady was born in 1980 in Montevideo, Uruguay. She studied theater at the École Internationale de Théâtre Jacques Lecoq, Paris, and received an MFA from Chelsea College of Arts, London. Mulleady’s paintings are representations of unsettling scenes and contorted bodies, oscillating between the beautiful and the horrifying, the quiet and the violent. Recognizable poets, writers, and artists are often featured in her work, among them the French playwright Antonin Artaud. Artaud, briefly a member of the surrealists and an important figure of twentieth-century theater, is best known for his writing associated with the Theater of Cruelty, an avant-garde form of theater that holistically assaults the audience’s senses. Artaud’s aim was to jar his public into a better understanding of their own repressed feelings, describing the experience as a “communion between actor and audience in a magic exorcism.” Mulleady’s exhibitions are similarly infused with a consideration of the gallery as a proscenium; she often intervenes in the spaces in which her paintings are installed, staging them with readymades and architectural interventions. She has had solo exhibitions at Swiss Institute, New York (2019); Galerie Neu, Berlin (2018); Schloss, Oslo (2018); Kunsthalle Bern (2017); Freedman Fitzpatrick, Los Angeles (2017); and Museo Archeologico Nazionale, Naples (2015). In 2019 Mulleady’s work was included in May You Live in Interesting Times at the 58th Venice Biennale. 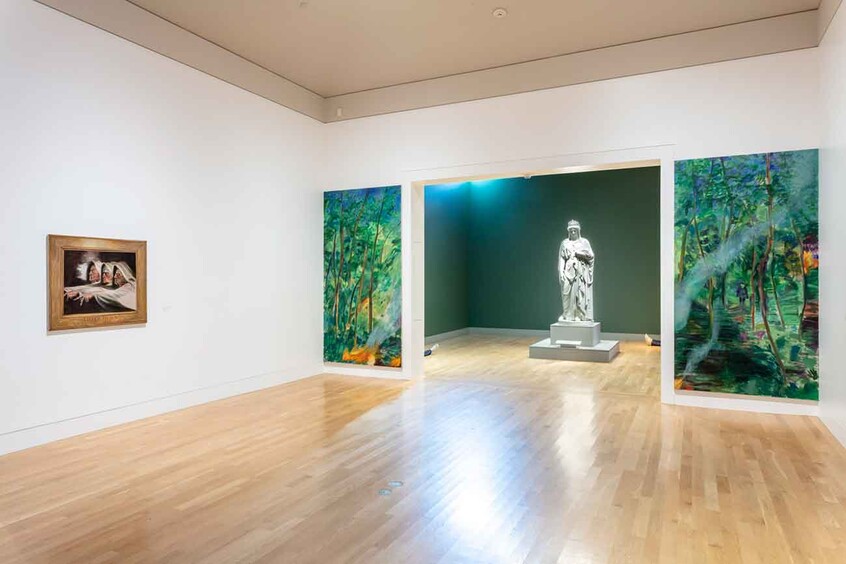 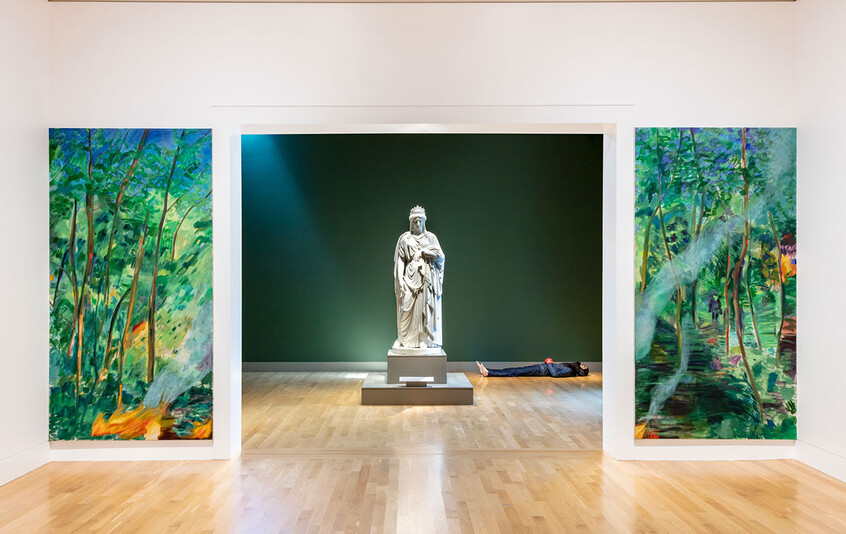