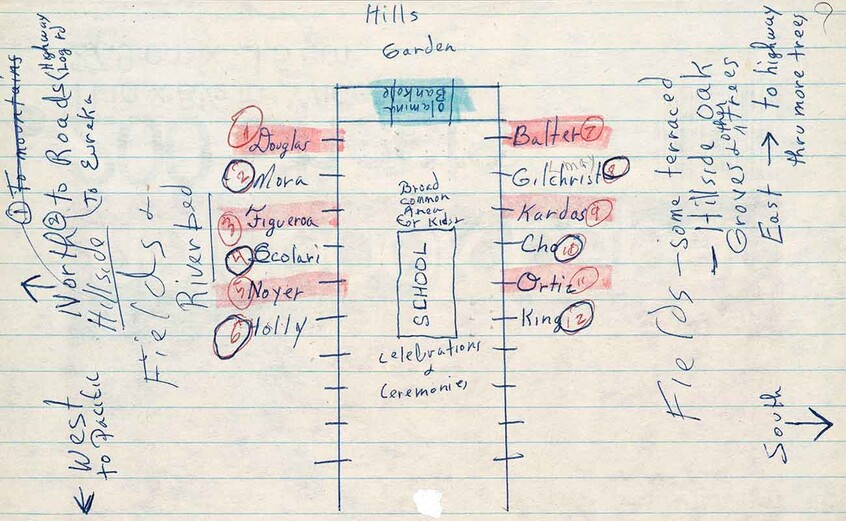 Octavia E. Butler, Map of Acorn from notes for Parable of the Talents, ca. 1994. (Detail) Manuscript on binder paper, 8 1/2 x 11 in. © Octavia E. Butler. Reprinted by permission of the Octavia E. Butler Estate with Writers House, LLC acting as agent for the Estate. The Huntington Library, Art Museum, and Botanical Gardens. 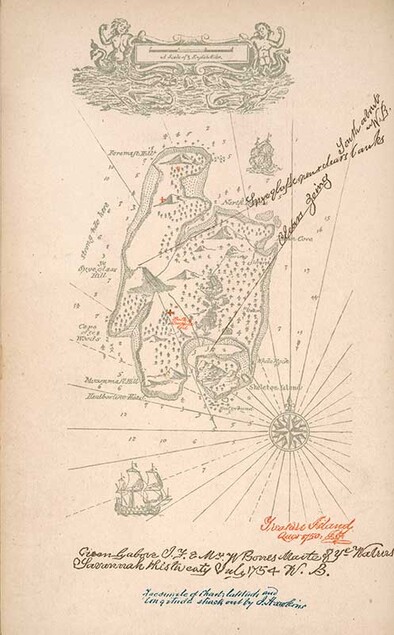 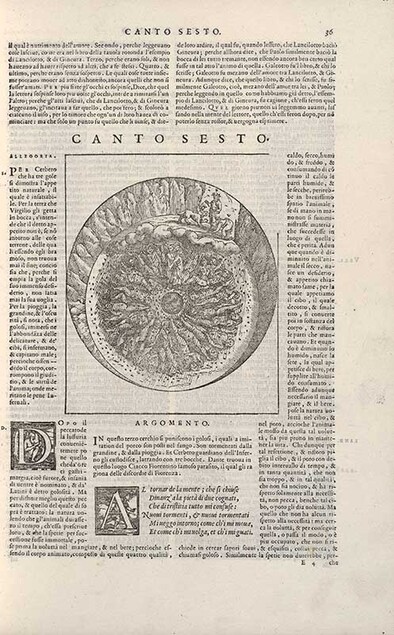 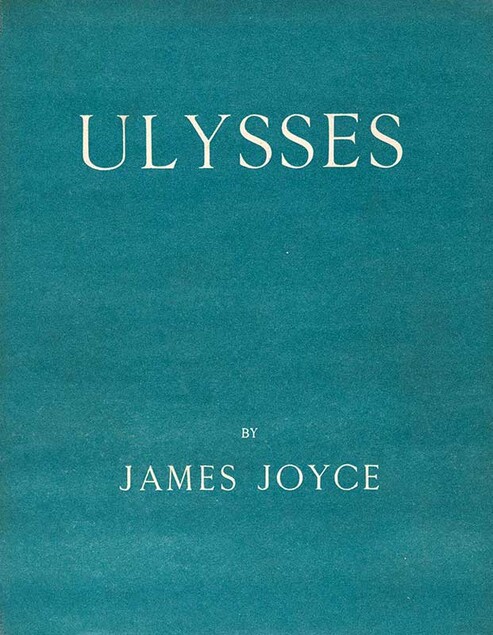 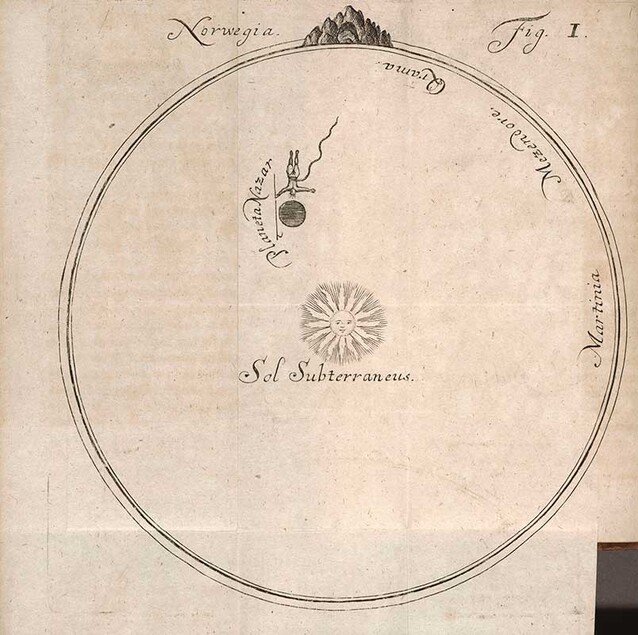 Map of journey to the center of the earth. From Ludvig Holberg, Nicolai Klimii iter svbterranevm, 1741. Printed book. © The Huntington Library, Art Museum, and Botanical Gardens. 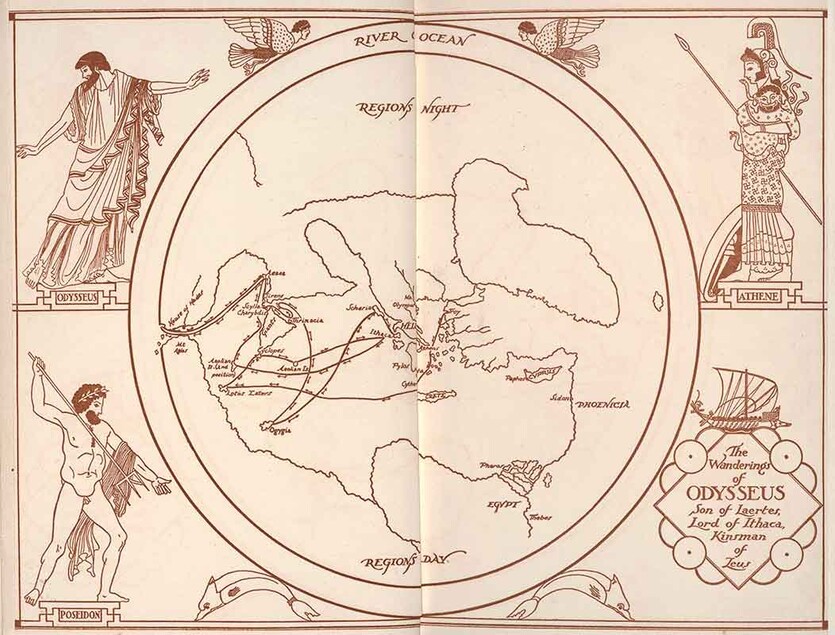 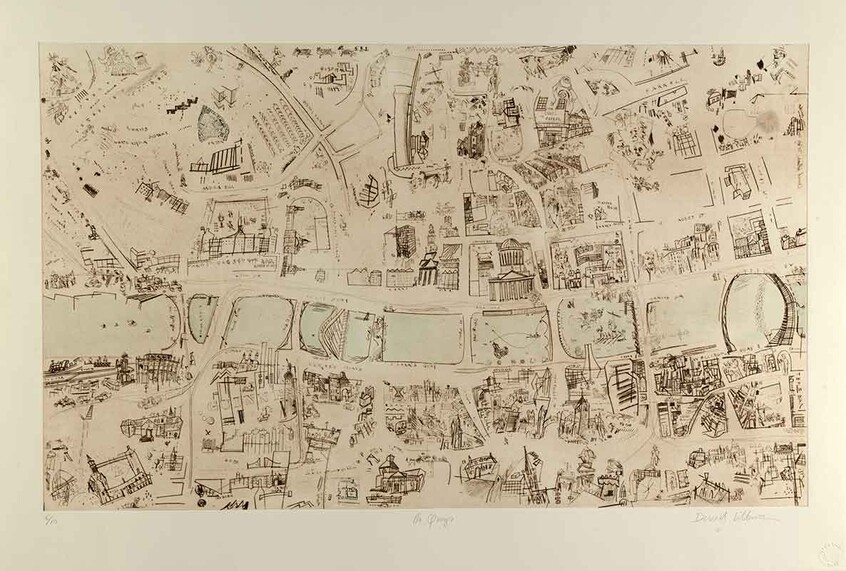 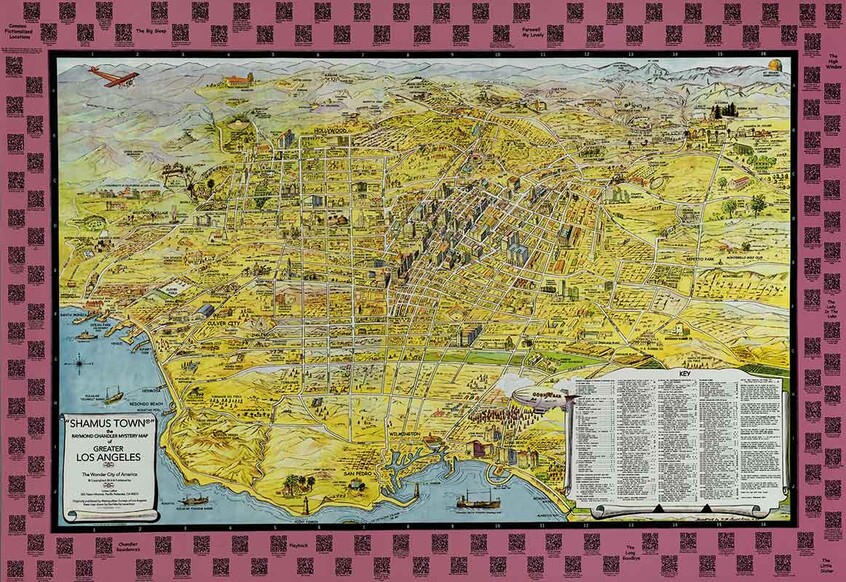 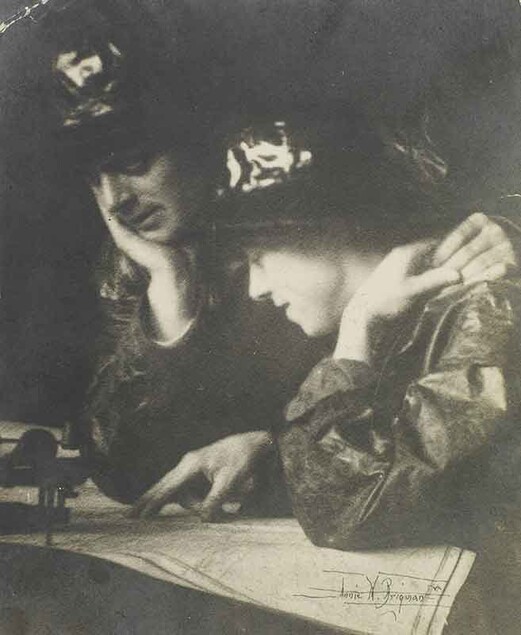 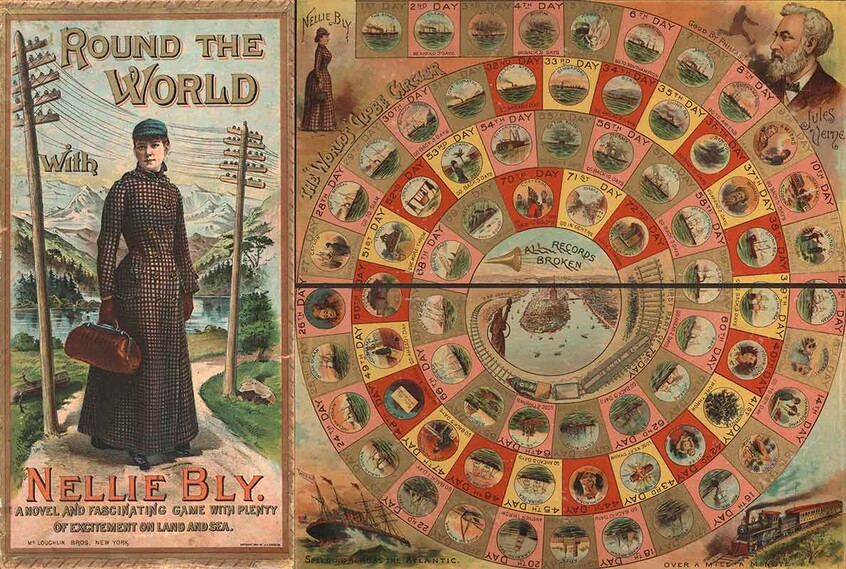 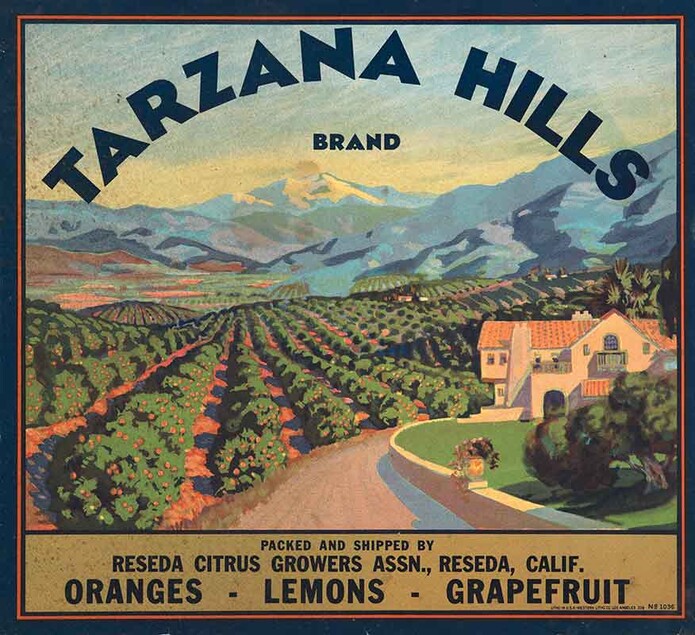 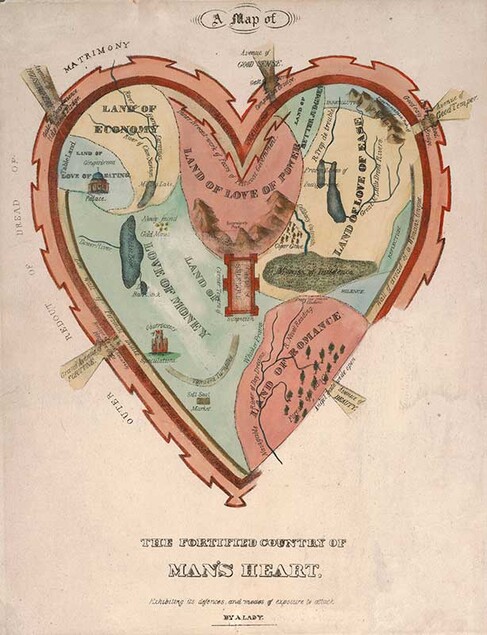 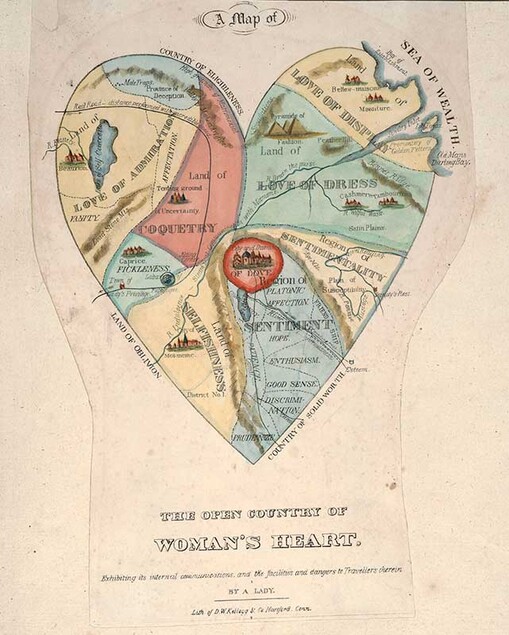 On the occasion of the centennial of James Joyce’s Ulysses, “Mapping Fiction” includes works by Octavia E. Butler, William Faulkner, Jack and Charmian London, J. R. R. Tolkien, and Mark Twain, among others.

SAN MARINO, Calif.—The Huntington Library, Art Museum, and Botanical Gardens will present “Mapping Fiction,” an exhibition focused on the ways authors and mapmakers have built compelling fictional worlds. On view in the Library’s West Hall from Jan. 15 through May 2, 2022, the exhibition is timed to coincide with the centennial of the publication of James Joyce’s groundbreaking 1922 modernist novel, Ulysses.

Drawn entirely from The Huntington’s collections, “Mapping Fiction” includes a first edition of Joyce’s novel and a typescript draft of one of its chapters, cartographically inspired intaglio prints of Dublin as described in the book, other mappings of the novel and the famous texts to which it alludes, and materials related to the annual celebration of Bloomsday in Dublin on June 16—the single day in 1904 during which the novel takes place.

“Joyce adamantly did not want Ulysses published with a schema, a map of Dublin, any type of explanation really,” said Karla Nielsen, curator of literary collections at The Huntington and curator of the exhibition. “His resistance provoked me to think about how maps function when inset into a print novel. How do they influence how readers imagine the narrative?”

About 70 items will be on view, focused on novels and maps from the 16th through the 20th century—largely early editions of books that include elaborate maps of imaginary worlds. Among the highlights are Lewis Carroll’s 1876 edition of The Hunting of the Snark, Robert Louis Stevenson’s maps from Treasure Island and Kidnapped, J. R. R. Tolkien’s map from the trilogy The Lord of the Rings, and science fiction writer Octavia E. Butler’s hand-drawn maps from notes for Parable of the Talents (1998) and her unpublished novel Parable of the Trickster. In addition to Butler’s archives, the show draws on The Huntington’s archival collections of Jack and Charmian London, Christopher Isherwood, and others, as well as the institution’s rich print holdings in travel narratives, English literature, and the history of science.

The exhibition not only includes representations of the world as presented in maps and books of fiction, but also indicates the influence of these representations on the actual world. These include the use of names of imaginary places for states and neighborhoods, as well as the tourism inspired by how authors have represented actual places in their novels.

The exhibition will be divided into five groupings of materials under the following thematic headings: “Ulysses’ Coordinates,” “Fantastic Lands,” “Journeys Around and through the Earth,” “Plotting the Actual,” and “Place Names and Literary Tourism.”

Ulysses’ Coordinates
James Joyce’s Ulysses is inextricable from the city of Dublin, Ireland, where all the novel’s action takes place on June 16, 1904. However, the precise plotting of the novel’s action to Dublin’s architecture and infrastructure is just one of the ways that a reader might envision and make sense of the work. The narrative is also underlaid by extended analogies to Homer’s Odyssey, to Dante, Shakespeare, and Gaelic lyric—an extensive array of literary and historical references.

Featured items on view in this section of the exhibition include a first edition of Joyce’s Ulysses, a draft of the novel’s “Penelope” chapter, and a suite of seven prints by the Irish artist and printmaker David Lilburn (1950–2021) that show the overlay of cityscape and literary references in the book, depicting Dublin as it uniquely exists in Joyce’s novel.

A related academic conference, “Joycean Cartographies: Navigating a New Century of Ulysses,” will take place at The Huntington Feb. 2–4, 2022. The conference’s five panels of talks will investigate Joyce’s strategies for narrating the modern city and the extension of Joycean narrative techniques to novels about other cities. The conference days will be punctuated by short “Ulysses on the Clock” segments, readings of the text at the time of day at which they are set, serving as a reminder of the circadian structure of the novel and hearkening to the playful nature of annual international Joyce conferences.

Fantastic Lands
The inclusion of inset maps in popular late 19th-century adventure novels, such as Robert Louis Stevenson’s Treasure Island and Kidnapped, associated the practice with young adult or children’s literature by the 20th century. But in recent years—with the resurgence of speculative fiction—the use of novelistic maps has become popular in a much wider swath of literature.

The maps in the books in this section of the exhibition facilitate immersion in the narrative and help readers orient to sometimes complex worlds, including worlds with little or no reference to known earthly places. For some stories, the maps are more allegorical than topographical, as is the one in the exhibition based on John Bunyan’s 1678 spiritual narrative, The Pilgrim’s Progress.

Other featured objects in this section include an Arion Press artist book edition of Edwin A. Abbott’s satirical novella Flatland, a Romance of Many Dimensions; J. R. R. Tolkien’s Lord of the Rings trilogy; George R. R. Martin’s A Game of Thrones; maps from the Octavia E. Butler archive related to her Earthseed novels; and a map for The Mortmere Stories of Christopher Isherwood and Edward Upward.

Journeys around and through the Earth
In addition, the exhibition features a section devoted to works related to journeys—real and imagined—through and around the planet. These include Ludvig Holberg’s 1741 novel Journey to the Center of the Earth, by Niels Klim, an early work of science fiction, paired with Athanasius Kircher’s late 17th-century scientific treatise, Mundus Subterraneus (Subterranean World), and 19th-century “hollow Earth” narratives. There is also Jules Verne’s 1873 adventure novel, Around the World in 80 Days, next to a board game based on the travels of Nellie Bly, a journalist who, soon after the publication of Verne’s novel, circumnavigated the world in just 72 days while reporting on her adventure. Lewis Carroll’s The Hunting of the Snark is displayed alongside a photograph of Jack and Charmian London on their yacht, the Snark, in which they attempted to sail around the world, a voyage that Jack London wrote about in his 1911 nonfiction book, The Cruise of the Snark.

Plotting the Actual
Maps of actual places underscore the correspondence between the world depicted in the novel and those places as they exist outside of the novel, though the relationship is always imaginary. Novelists can use maps to intentionally blur the line between fact and fiction.

Novels of the 18th century, such as Jonathan Swift’s Gulliver’s Travels, purport to be the real-life experiences of the title characters, with accompanying maps showing their supposed journeys. The novel became a more prevalent genre during the 18th century as well, and earlier works of literature were republished with newly created maps to attract new audiences. Novels became more widely written and read in the 19th century, and by its end, novelists could anticipate that their works would be published with a map if they wanted. The late 19th century saw the introduction of dust jackets and printed endpapers, two new surfaces where maps could be placed.

Objects on view in this section include an 18th-century edition of Miguel de Cervantes’ El Ingenioso Hidalgo Don Quixote de la Mancha (The Ingenious Gentleman Don Quixote of La Mancha) with an inset map depicting the journey of the Don and his squire, Sancho Panza; and early editions of Swift’s Gulliver’s Travels with the contemporary world map from which its maps were derived.

More modern works include first editions of Armistead Maupin’s Tales of the City and Karen Tei Yamashita’s Tropic of Orange, a map of London based on Virginia Woolf’s 1925 novel Mrs. Dalloway, and maps drawn by William Faulkner for Absalom, Absalom!

Tourists often understand the places where they travel because of advance reading, and they even seek out places because they were depicted in fiction. Events such as Bloomsday, named after the protagonist in Joyce’s Ulysses and celebrated on the single date the novel’s action takes place, reprise invented literary action in actual spaces, further associating the novel with its locale. A theme park can make a fictional world temporarily traversable, and a place can become significant because certain writers worked there for decades or indelibly imprinted their version of the place on the collective imagination. “Fictional places undergird and overlay the places we walk through every day,” Nielsen said.

Among the items featured in this section of the exhibition are Helen Hunt Jackson’s 1884 novel, Ramona, set in Southern California after the Mexican–American War of 1846–48; a Mark Twain map of the United States; a depiction of Disneyland’s Tom Sawyer Island; Bloomsday ephemera; and a Raymond Chandler Mystery Map of Los Angeles.