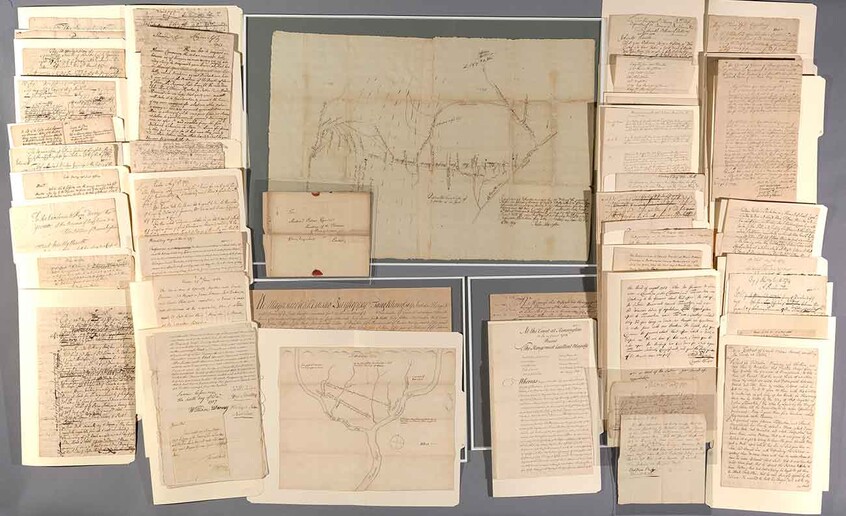 Documents of the Walking Purchase and the Councils of Easton, 75 manuscripts, including two manuscript maps, 1685–1762. The Huntington Library, Art Museum, and Botanical Gardens. 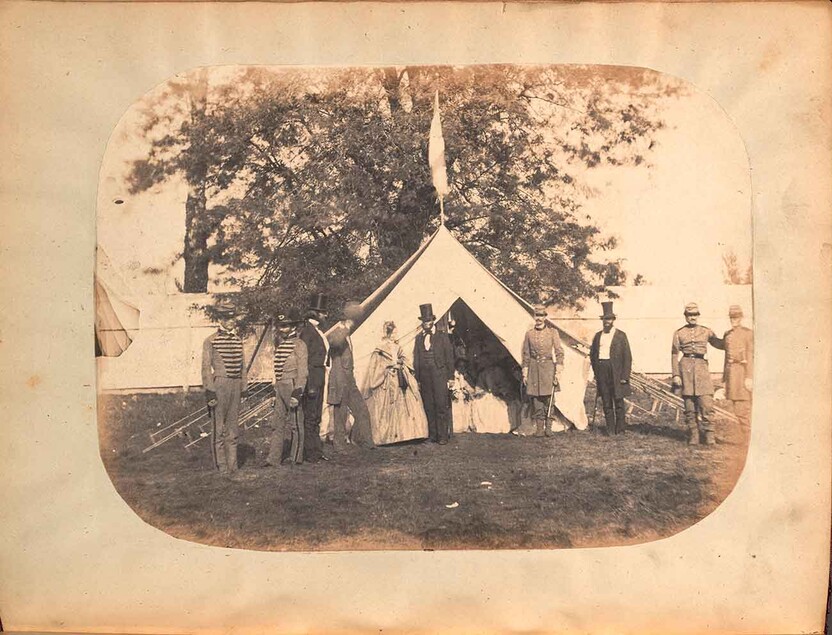 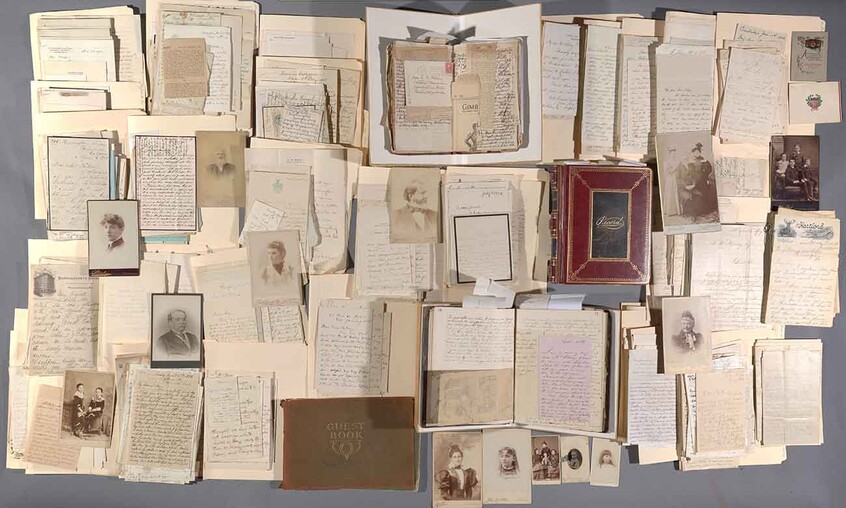 SAN MARINO, Calif.—The Huntington Library, Art Museum, and Botanical Gardens announced today that it has acquired a recently discovered archive documenting an 18th-century investigation into a land deal—the so-called Walking Purchase—that defrauded the Lenni Lenape (known to Europeans as Delawares) out of more than a million acres in Pennsylvania. The collection of 75 manuscripts includes affidavits, depositions, sworn testimonies, maps, and letters that document the inquiry, which involved not only the agents of Pennsylvania's proprietors, Delawares, and Quakers, but also Benjamin Franklin (who represented the colony of Pennsylvania in London), the British military command, and the British Crown. The collection was purchased at The Huntington's 23rd annual Library Collectors' Council meeting last month.

The Council also purchased three original illustrated Japanese handscrolls—one measuring 12 feet, and each of the other two extending more than 21 feet in length—that record U.S. Commodore Matthew C. Perry’s maritime expeditions to Japan in 1853 and 1854. The unknown artists carefully recorded the measurements and movements of Perry’s ships, American machinery and technology, and detailed renderings of American sailors, their uniforms, and American tools and weapons, providing a Japanese perspective on the foreign incursions. Perry’s military and diplomatic actions in Japan ushered in a new era of U.S. dominance in Asia and accelerated Japan’s transformation into an industrialized nation, starting in the late 19th century.

In addition, The Huntington acquired Sketches of Camp Boone, a rare published album with 20 original photographs depicting the military camp life of the Kentucky State Guard in 1860, shortly before the start of the U.S. Civil War. The photographs were made by two virtual unknowns—the Louisville firm of C. Alfred Garrett and George H. Nickerson—who worked quickly and used a portable darkroom to develop a series of carefully composed views depicting soldiers, armaments, equipment, and activities of the 3,000 members of the Guard.

The Council also acquired the archive of novelist Jeanette Garr Washburn Kelsey (1850–1930), daughter of Cadwallader Kelsey (1818–1882), a businessman and politician who founded General Mills Inc. At the heart of the archive is a 435-page illustrated manuscript memoir that tells the story of a 14-year relationship between Jeanette G. W. Kelsey and her confidante, the British author Julia Clara Pitt Byrne (1818–1894), who was a prolific journalist and author of popular travel accounts and gossipy memoirs, as well as more serious works that documented abuses in English workhouses. The archive also includes extensive correspondence with an array of female cultural movers and shakers on both sides of the Atlantic, as well as the Kelsey family of writers, architects, artists, inventors, lawyers, and activists.

The Library Collectors’ Council is a group of 44 households that assist in the development of the collections by supporting the purchase of important works that the Library would not otherwise be able to afford.

“The Huntington’s current Centennial exhibition, ‘What Now: Collecting for the Library in the 21st Century,’ includes many items purchased with the Council’s support over the past two decades, drawing sharp attention to the lasting impact of these important donors,” said Sandra Ludig Brooke, Avery Director of the Library at The Huntington. “And this year is no exception. Our most recent acquisitions will provide humanities researchers with tremendous material enabling new insights regarding the history and literature of the past three centuries.”

Highlights of the newly purchased materials include:

The collection consists of documents retained by the office of William Denny (1718–60), a British military officer who served as the governor of Pennsylvania during the French and Indian War. Its core focuses on the 1757 inquiry into the Walking Purchase, a spectacular land swindle orchestrated in 1737 by the proprietor of Pennsylvania, Thomas Penn, and his government. The Lenni Lenape (Delaware) people were defrauded of a tract of land roughly the size of Rhode Island, and when they tried to complain, the proprietary government conspired with Delawares’ old enemies, the Iroquois, to force them off their ancestral land.

Taking advantage of the war, Delawares returned in the summer of 1755, this time backed by the French and armed. In November 1756, meeting with Delaware chief Teeduyscung, Denny asked whether the people of Pennsylvania had “done you any kind of injury.” Teeduyscung disclosed that his people’s lands had been “taken by fraud” and pointed an accusing finger at the proprietor.

Desperate to stop the violence and secure Delaware military assistance, Denny promised Teeduyscung a fair investigation. This inquiry, which continued for more than a year, became the main item on the agenda of a council that convened in August 1757 in Easton. This collection preserves the documents of the inquiry and the council—original, unedited records of sworn testimony, affidavits, accounts, and even a forged treaty produced by Penn’s lawyers—as well as letters, maps, and other documents that date back to the time of the Walking Purchase.

The archive also includes military and political correspondence that sheds new light on the inner workings of British diplomacy and provincial politics—especially the struggle between the proprietary government and the general assembly headed by Benjamin Franklin.

Perry returned to Japan on Feb. 13, 1854—with more sailors, ships, and weapons—and threatened war if the Japanese did not accede to American demands. The negotiations lasted for weeks and concluded with the Treaty of Kanagawa on March 31, 1854. The second set of scrolls is vividly illustrated to recount Perry’s second and decisive attempt at trading with Japan. It contains detailed drawings and descriptions of American machinery and technology.

Executed shortly after Perry and his squadron departed, the second set of scrolls contains portraits of Perry and his chief of staff, Henry A. Adams, along with detailed renderings of American tools and weapons, including knives, hammers, saws, pistols, rifles, and swords.

“The Huntington’s Pacific Rim collections present a wide array of materials on American exploration and conquest in the Pacific, but rarely do they include materials from the perspective of the Asia Pacific region,” said Yang. “These scrolls complement the Library’s existing collections on Commodore Perry and provide Huntington scholars a more balanced view of U.S.-Japan relations in the mid-19th century.”

Rare Early Book Depicting Military Camp Life on the Eve of the American Civil War
“Sketches of Camp Boone extends The Huntington’s dominance as a preeminent repository of 19th-century photographically illustrated work and pictorial representations of the Civil War,” said Jennifer Watts, former curator of photography and visual culture at The Huntington.

On Aug. 23, 1860, 3,000 members of the newly formed Kentucky State Guard assembled at Camp Boone in Louisville for four days of drilling, parading, and induction into military life. Photographers Garrett and Nickerson captured the event in portraiture and landscapes, a technical feat at the time.

State leaders had established the Kentucky State Guard on March 5, 1860, in alarmed response to the attempted slave rebellion led by John Brown in 1859. Five months later at Camp Boone, the governor and his wife greeted Kentucky’s new citizen soldiers and their commander, Gen. Simon Bolivar Buckner.

Sectional loyalties in Kentucky, a critical border state, were famously divided, pitting “brother against brother.” When the war came, the majority of the Kentucky State Guard joined the Confederate fight, making these few photographic glimpses into Southern military life rarer still. Southern photographers mostly could not—and did not—make pictures of soldiers in the field.

“As scholars have long noted, making and mounting salt paper prints—the earliest and rarest form of paper photography—in book form results in a unique production with demonstrable variations in print tone and quality, cropping, mounting, and other marks,” said Watts.

Only four other copies of Sketches are known to exist, one of which is in private hands.

“These photographs offer the potential to expand the field of photographic history, since little to nothing is known of the photographers, their careers, or why and for whom they created this labor-intensive work,” said Watts.

“A Tie as Firm as Strong”: The Archive of Jeanette G. W. Kelsey (1863–1925)
“The 14-year relationship between two exceptional women lies at the center of this remarkable collection,” said Karla Nielsen, curator of literary collections at The Huntington.

On March 29, 1894, London newspapers announced the death of socialite and prolific journalist Julia Clara Pitt Byrne (b. 1818), widow of the proprietor of the Morning Post. When the news reached her longtime confidante, Philadelphia’s Jeanette Garr Washburn Kelsey (1850–1930), it dealt a crushing blow.

Six months after Byrne’s death, Kelsey set out to create “some record of the friendship that existed between two women who loved each other,” a friendship that was “a blessing to both,” “a tie as firm as strong that nothing ever came between the two who were faithful.” The result is a two-volume illustrated manuscript—a powerful and moving story of the friendship between these semi-forgotten women writers—that includes all of Byrne’s letters painstakingly copied by her grieving friend.

“This single document would merit acquisition because of its unprecedented insight into relationships between women in the last half of the 19th century, a topic of great interest to scholars,” said Nielsen. “But Kelsey’s correspondence also contains letters of such authors as Annie Adams Fields and Sarah Orne Jewett, actresses Ida Vernon and Anne Hartley Gilbert, and the family of poet Hilaire Belloc.”

The archive includes voluminous correspondence of Jeanette G. W. Kelsey, her husband, children, and in-laws—providing an intimate record of the literary, intellectual, cultural, and political scene of the 19th and early 20th century. The family correspondents include Jeanette’s husband, Albert Warren Kelsey (1840–1921), a political economist and journalist, and a friend of Winslow Homer; and her father-in-law, Albert Hannibal Kelsey (1811–1901), the Boston contractor and superintendent responsible for the construction of numerous buildings in Boston, including the extension of the State House. In addition, there are letters from the Kelsey children, as well as correspondence dealing with the administration of her father, Wisconsin Gov. Cadwallader Washburn (1818–82), regarding his estate and business enterprises.

“This extraordinary family archive will be a rich primary source for scholars of 19th- and early 20th-century American and British literature and history,” said Olga Tsapina, Norris Foundation Curator of American History.