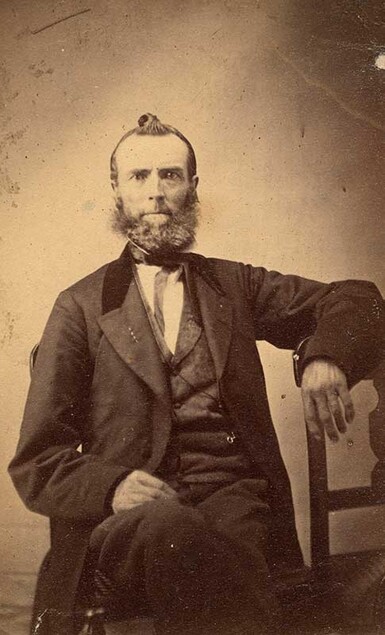 Zachariah Taylor Shugart (1805–1881), a Quaker abolitionist who operated a stop on the Underground Railroad at his Michigan farm, ca. 1864. The Huntington Library, Art Museum, and Botanical Gardens. 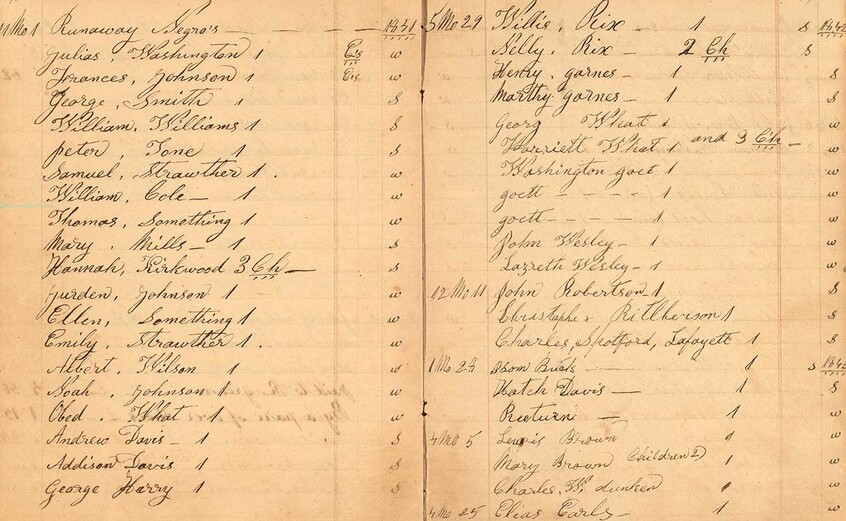 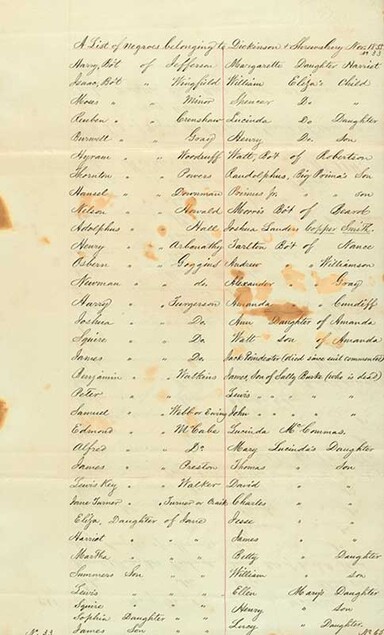 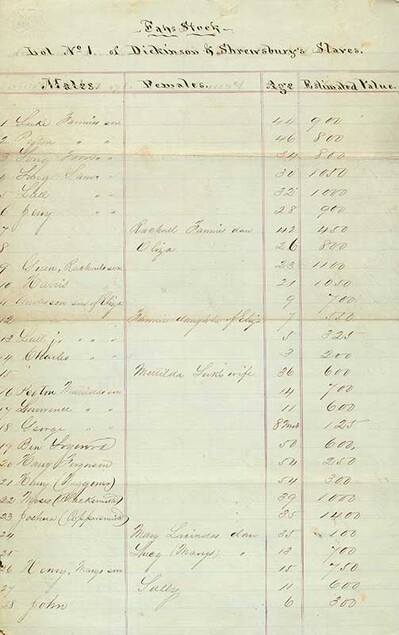 Dickinson & Shrewsbury saltworks list of enslaved people to be auctioned off, late-1850s. The Huntington Library, Art Museum, and Botanical Gardens.

Troves include a rare manuscript from the Underground Railroad.

SAN MARINO, Calif.—The Huntington Library, Art Museum, and Botanical Gardens announced today that it has acquired two collections related to abolition and slavery in 19th-century America, including an exceptionally rare account book from the Underground Railroad.

The first group of materials includes the papers of Zachariah Taylor Shugart (1805–1881), a Quaker abolitionist who operated an Underground Railroad stop at his farm in Cass County, Michigan. The centerpiece of the collection is an account ledger which contains the names of 137 men and women who passed through Shugart's farm while trying to reach freedom in Canada; these names are recorded amid everyday details of Shugart's business life, including the number of minks he trapped and the debts he was owed.

The second collection is the archive of some 2,000 letters and accounts documenting the history of the Dickinson & Shrewsbury saltworks, a major operation founded in 1808 in what is now Kanawha County, West Virginia. The records shed light on an industry that was not plantation-based but still relied heavily on slave labor.

"These new materials provide compelling windows into the lives of those who were enslaved and those who escaped slavery, and also shed light on the politics of the times before, during, and after the Civil War," said Sandra Ludig Brooke, Avery Director of the Library at The Huntington. "They are a vivid complement to The Huntington's rich collections documenting American slavery, abolitionist movements, and the history of the American South."

The papers of the Dickinson & Shrewsbury saltworks provide insights into the lives of enslaved and free black Virginians, including the family of Booker T. Washington, who later became the president of the Tuskegee Institute (now named Tuskegee University). Many of the papers concern a protracted lawsuit that occurred as the company was dissolved in 1857, underscoring the politics and economics of slavery in the years leading up to the Civil War. The collection includes numerous bills of sale for those who were enslaved, detailed records of auctions, and records of the loans of enslaved men and women to the saltworks.

"These two important acquisitions highlight the complexities of documenting America's history of slavery," said Olga Tsapina, the Norris Foundation Curator of American History at The Huntington.

The papers of the Quaker abolitionist Shugart include an 1864 letter from Shugart's son Joseph, written just two days before Joseph was killed at age 24 at the Battle of Cedar Creek in Virginia. They also include listings of legal expenses likely incurred during lawsuits over the 1847 failed "Kentucky Raid," when slave catchers from Kentucky attempted unsuccessfully to seize runaways hiding on Michigan farms, including Shugart's. Tsapina said those running the Underground Railroad rarely kept records because they knew they were breaking federal law, making Shugart's journal especially valuable to scholars.

The journal lists 137 individuals who were escaping slavery, some with such evocative names as "North Star" or "General W. Hampton," and some denoted only by first name. Some entries include the number of children in the group, sometimes as many as five. Each entry is marked with either "S" or "W," markings that may have indicated a next stop on their northward journey.

Tsapina said the document was comparable to another important Huntington holding, the ledger of abolitionist John Brown. While Brown's account book is not related to the Underground Railroad, it is similar to Shugart's in that it contains historically valuable records of an abolitionist combatting slavery amid mundane accounts and details of daily life. These were products of an era when many people did not have funds to purchase multiple account ledgers.

The two collections, which were purchased recently at auction, are currently being cataloged and will be made available to scholars in the near future. Some materials, including Shugart's ledger, will be digitized. The new collections complement and enlarge The Huntington's large holdings in material about slavery and abolition. These include the immense collection of noted Virginia collector Robert A. Brock, which documents three centuries of the history of the American South.