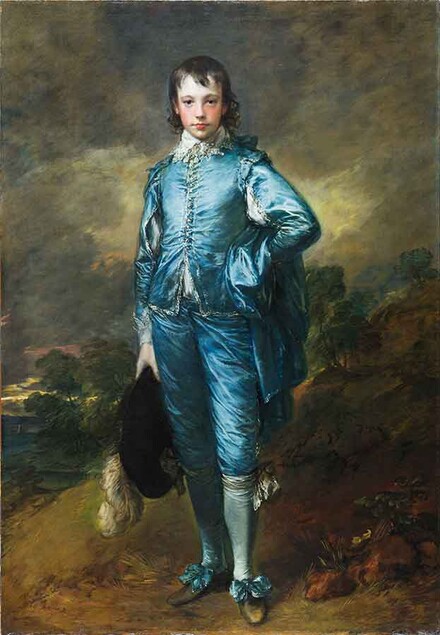 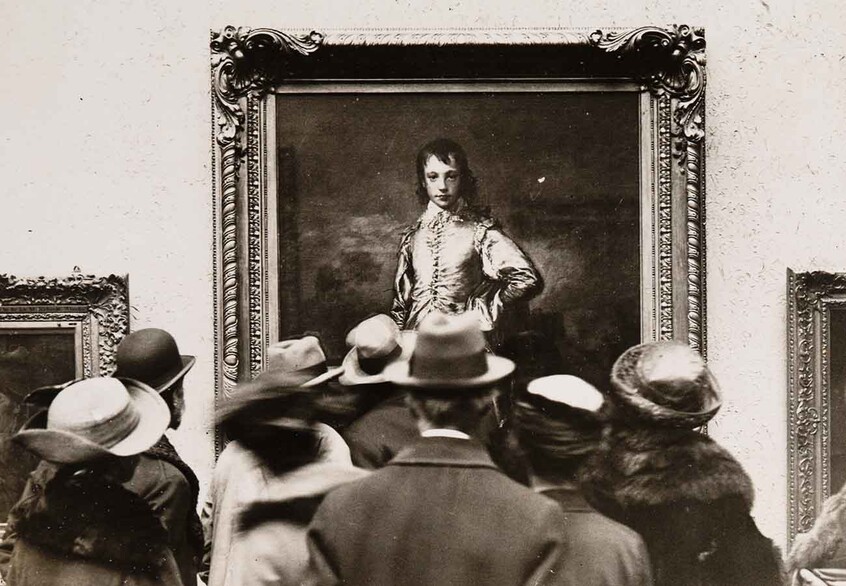 The Blue Boy on display at the National Gallery, London, 1922. The Huntington Library, Art Museum, and Botanical Gardens. 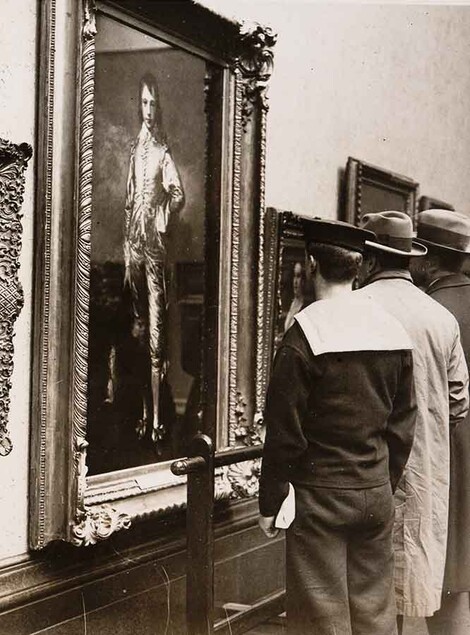 The Blue Boy on display at the National Gallery, London (side view), 1922. The Huntington Library, Art Museum, and Botanical Gardens. 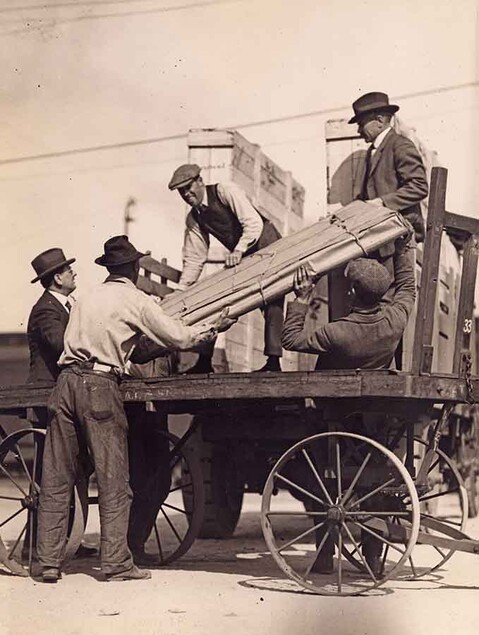 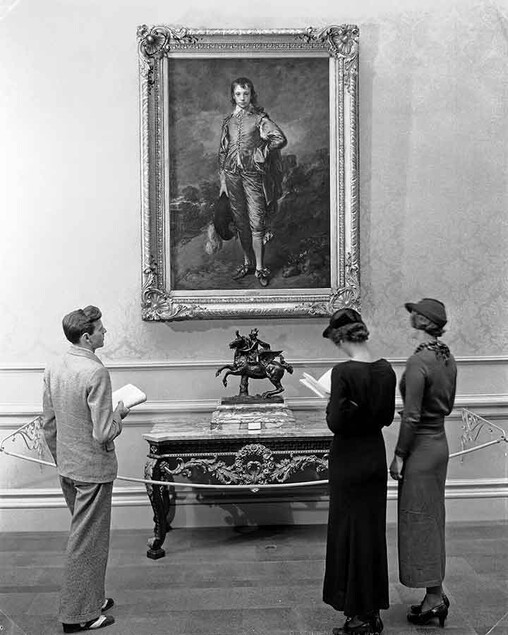 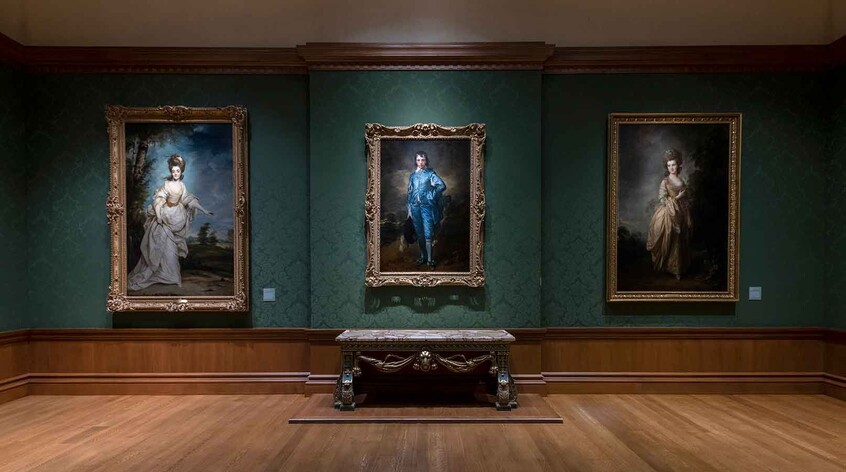 SAN MARINO, Calif. —One hundred years after Henry E. Huntington purchased Thomas Gainsborough’s masterpiece, The Blue Boy (ca. 1770) from the Duke of Westminster, and it set sail from England for its new home in the United States, the iconic portrait will go back on view at the National Gallery in London. The free exhibition will run from Jan. 25 through May 3, 2022, its opening date marking to the day 100 years since it last hung on the walls there. This will be the first time that The Huntington Library, Art Museum, and Botanical Gardens has loaned the painting.

At the National Gallery, The Blue Boy will be displayed among a small selection of related masterworks that connect to Gainsborough’s oeuvre and influences. A robust slate of public programs and a catalog will complement the exhibition. In exchange for the loan, a work from the National Gallery’s collection will come to The Huntington for display.

“This masterpiece has made an indelible mark on both art history and popular culture, capturing the imaginations of a wide range of audiences,” said Karen R. Lawrence, Huntington President. “Given The Blue Boy’s iconic status at The Huntington, this is an unprecedented loan, one which we considered very carefully. We hope that this partnership with the National Gallery will spark new conversations, appreciation, and research on both sides of the Atlantic.”

A part of the core art collection built by Huntington and his wife Arabella, The Blue Boy has been a visitor favorite since it went on view when The Huntington opened to the public in 1928. “We imagine this to be the one and only time the painting will travel, given its iconic status at The Huntington,” Lawrence said.

During the conservation process, curators were able to see for themselves a legendary note on the back of the painting. Before leaving England in 1922, The Blue Boy went on display for three weeks at the National Gallery, attracting some 90,000 visitors. A 1922 New York Times story about the painting’s departure reported, “The Blue Boy is leaving England forever and 90,000 persons seized a last opportunity to see it... On one of the stretchers at the back (of the painting) is scribbled in pencil, ‘Au revoir. CH.’ It is the wish of Sir Charles Holmes, director of the National Gallery, which neither he nor any other Englishman expects to see fulfilled.”

That wish, to see The Blue Boy again—albeit some generations later—will come true.

“The Blue Boy has held a place in the hearts of the British public since it was first exhibited at the Royal Academy in 1770,” said National Gallery Director Gabriele Finaldi. “We will be delighted to bring this extraordinary work of 18th-century British painting to the people of Great Britain once again.”

About The Blue Boy

Thomas Gainsborough (1727–1788) was among the most prominent artists of his day. Though he preferred to paint landscapes, he made his career producing stylish portraits of the British gentry and aristocracy. Jonathan Buttall (1752–1805), the first owner of The Blue Boy, was once thought to have been the portrait’s sitter, but recent research has disproven this identification. The identity of the subject remains unconfirmed, though it has been suggested that the boy’s features are those of Gainsborough’s nephew and studio assistant, Gainsborough Dupont (1754–1797). The figure’s costume is significant. Instead of dressing his model in the elegant finery worn by most sitters at the time, or in the kind of quasi-classical robes often employed by his rival Joshua Reynolds, Gainsborough chose knee breeches and a slashed doublet with a lace collar–-a nod to the work of Anthony van Dyck, the 17th-century Flemish painter who had profoundly influenced British art.

Beyond its cultural significance, the painting is considered a masterpiece of artistic virtuosity. Gainsborough's command of color and mastery of brushwork are on full display in the painting, made even more apparent as a result of recent conservation work.

About the National Gallery
The National Gallery is one of the greatest art galleries in the world. Founded by Parliament in 1824, the Gallery houses the nation’s collection of paintings in the Western European tradition from the late 13th to the early 20th century. The collection includes works by Bellini, Cézanne, Degas, Leonardo, Monet, Raphael, Rembrandt, Renoir, Rubens, Titian, Turner, Van Dyck, Van Gogh and Velázquez. The Gallery’s key objectives are to enhance the collection, care for the collection and provide the best possible access to visitors. Admission free. More at nationalgallery.org.uk.