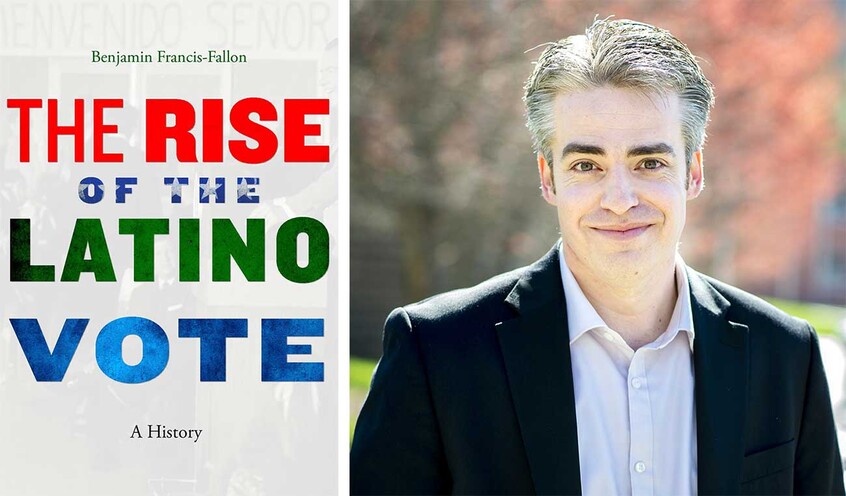 The biennial award of $10,000 for outstanding first monograph in American history and culture goes to Benjamin Francis-Fallon for The Rise of the Latino Vote: A History

Established in 2019 as a part of the Shapiro Center for American History and Culture at The Huntington, the Shapiro Book Prize is awarded biennially for an outstanding first scholarly monograph in American political, social, intellectual, or cultural history, with a focus on books that make exceptional use of primary source materials. A committee of preeminent scholars in the field selected Francis-Fallon’s book from among 60 submissions from a wide range of book publishers. The prize carries with it a $10,000 cash award.

Francis-Fallon will give an online talk on The Rise of the Latino Vote on Wednesday, Feb. 3, 4 p.m. PST as a Huntington Zoom webinar, at which time he will be formally presented with the prize.

“It has been an honor and a delight to facilitate the selection process for the Shapiro Prize in its inaugural year” said Steve Hindle, The Huntington’s W.M. Keck Foundation Director of Research. “We were thrilled with the response; 60 superb early-career works were nominated by publishers. My heartfelt congratulations go out to Benjamin Francis-Fallon, who has produced a deeply researched, cogently written, and profoundly topical volume, and my deepest thanks go to the prize committee, who have worked assiduously to bring us to this happy day.”

"We read an extraordinary array of pertinent and compelling monographs during the selection process,” said Hunter. “Topics ranged from new examinations of slavery, Native American nations, and feminism to the influence of the automobile on American history. The Rise of the Latino Vote stood out as an especially profound and necessary book. It is exhaustively researched and offers a compelling account addressing issues of great contemporary relevance.”

Francis-Fallon, who teaches courses on U.S. political, immigration, and Latino history, and whose essays have appeared in the Washington Post and the Los Angeles Times, expressed appreciation for the award. “Granted by one of the most significant repositories of historical materials in the nation, The Huntington’s Shapiro Book Prize is especially meaningful to me given the primacy of archival documentation in the creation of my book,” he said. “The Rise of the Latino Vote would not have been possible without the many friendly, hard-working, and generous archivists whose vast expertise guided my research from the beginning. Furthermore, this is a landmark acknowledgment of the rising salience of the book’s topic: how Latinos were pivotal players in the post-World War II era’s monumental political realignment.”

In The Rise of the Latino Vote, Francis-Fallon examines the creation and use of Latino identity on the national political stage. He illuminates how a loose network of actors worked to mold all “Spanish-speaking Americans” into a single constituency. But he also reveals how Democratic and Republican elites have regularly campaigned and governed by dividing Latino communities from one another, complicating the notion of a broader Latino electorate.

“In establishing the Shapiro Center, we sought to promote documentary research in American history, and are delighted that the prize celebrates the vital contributions of early-career scholars,” said L. Dennis Shapiro who, with his wife, Susan R. Shapiro, endowed the Shapiro Center and made the book prize possible. “We are thrilled that the inaugural prize has been awarded to such an original and topical volume.”

The runner-up for the prize was Matthew Fox-Amato for his Exposing Slavery: Photography, Human Bondage, and the Birth of Modern Visual Politics in America (Oxford University Press, 2019). Fox-Amato is assistant professor of history at the University of Idaho.

To be eligible for the 2021 Shapiro Book Prize, a submission must have been the first monograph published by its author, have a publication date of between Jan. 1, 2019, and Dec. 31, 2020, and have been based on original documentary research in some aspect of American history and culture broadly defined. Nominations were only accepted from the publishers of the volumes.

Information about the 2023 Shapiro Book Prize will be released in Spring 2022, with a closing date for publishers’ nominations of Sept. 1, 2022.

About the Shapiro Center
The Shapiro Center for American History and Culture at The Huntington was created to advance scholarship, knowledge, and understanding of American history and culture—especially of the early Republic and of the nation’s founders and leaders. It also promotes use of The Huntington's premier library collections in this field, which are unique west of the Mississippi.

Established in 2019, thanks to the vision and generosity of L. Dennis and Susan R. Shapiro, the Shapiro Center engages both scholarly and general audiences. Its Los Angeles home offers a special opportunity to explore West Coast and global perspectives on the American project and the genesis and evolution of national institutions.

The Huntington is one of the largest repositories of American historical materials in the nation. Extraordinary American presidential and founders’ papers sit within a broad humanities context that includes expansive and diverse holdings in American history, literature, and high and popular culture. Rich library and archival materials are complemented by The Huntington Art Museum’s outstanding American art collections.