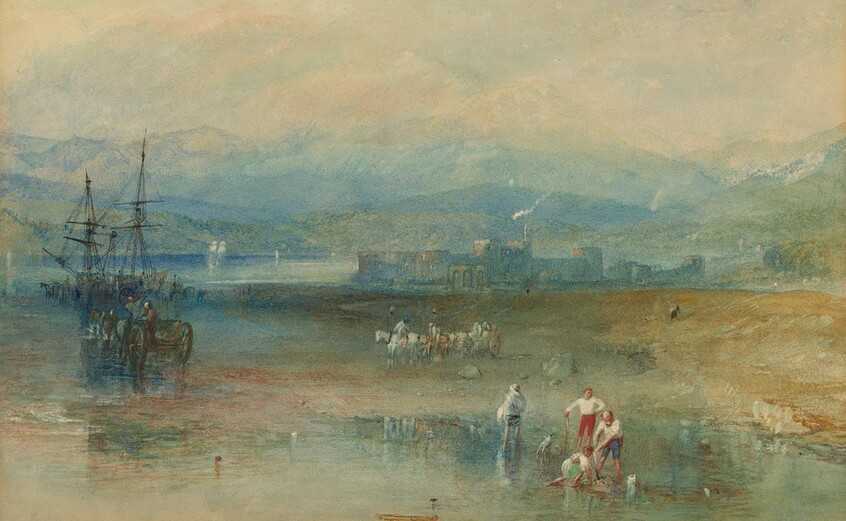 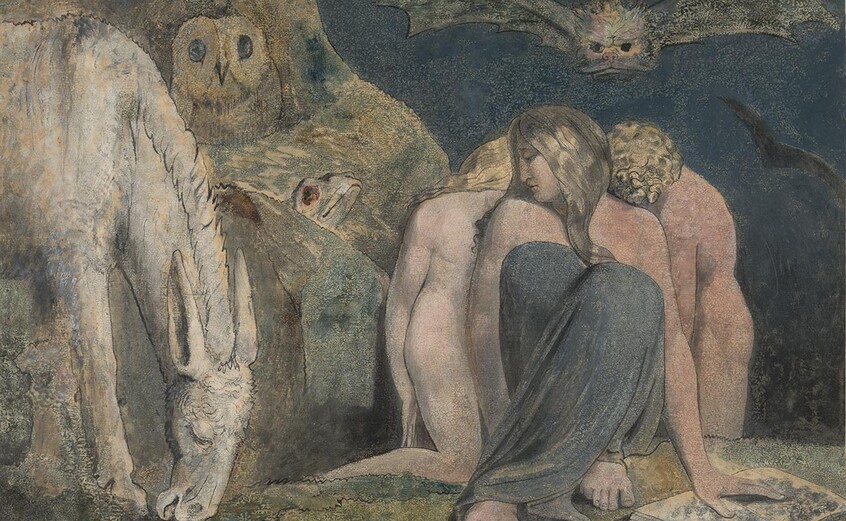 William Blake (1757–1827), Hecate or The Night of Enitharmon's Joy, 1795. Planographic color print with pen and ink and watercolor on wove paper, 16 3/8 x 22 in. The Huntington Library, Art Museum, and Botanical Gardens. 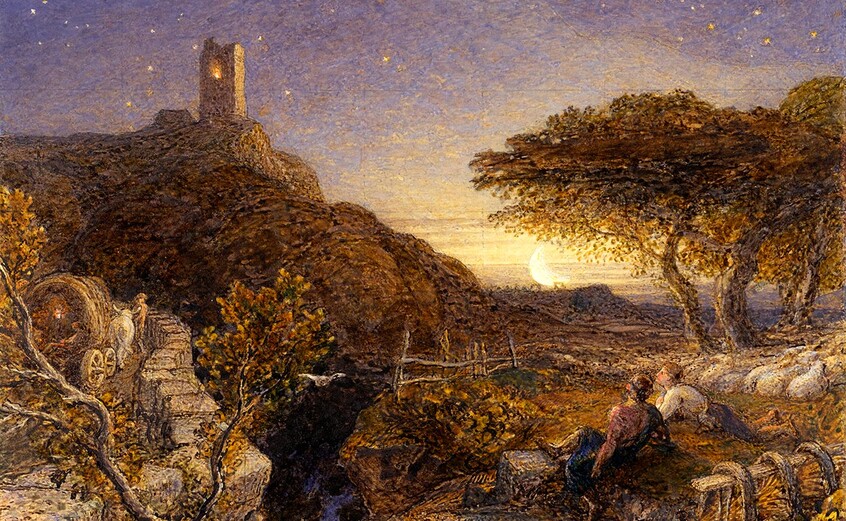 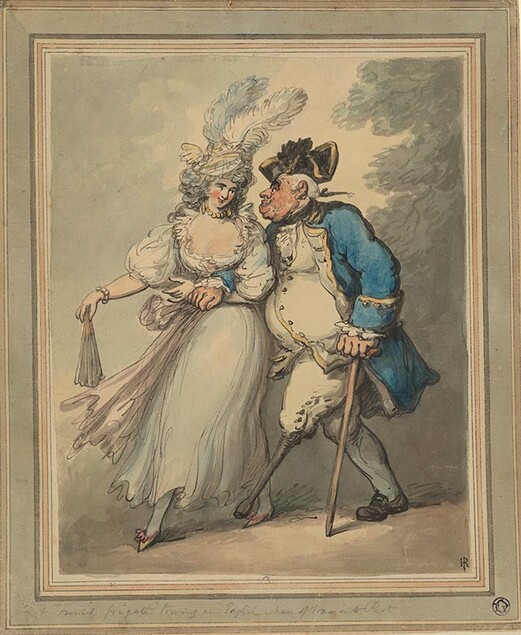 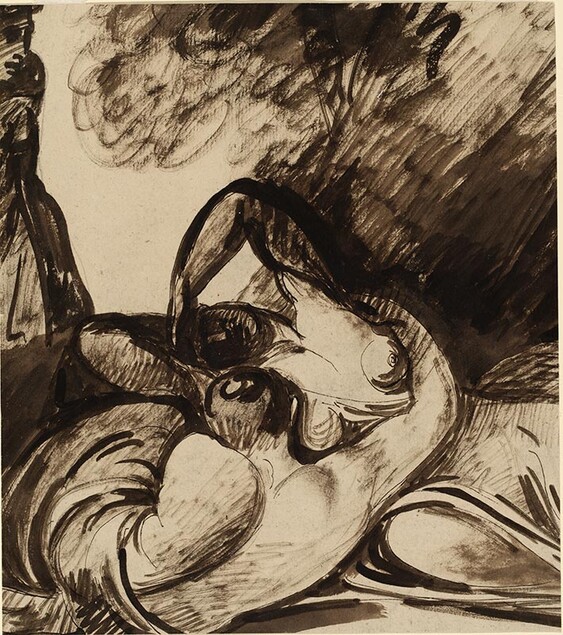 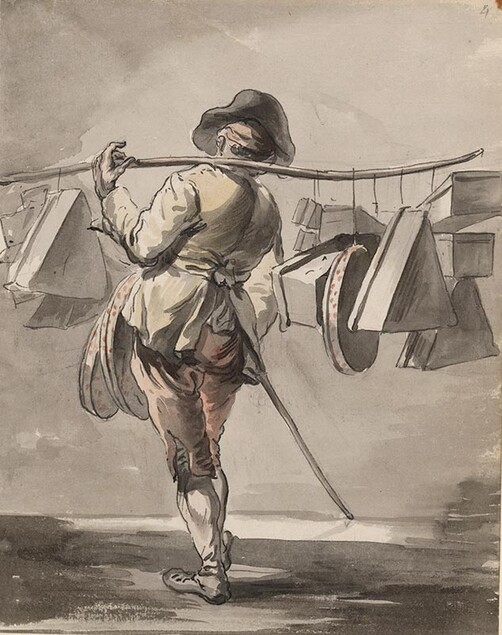 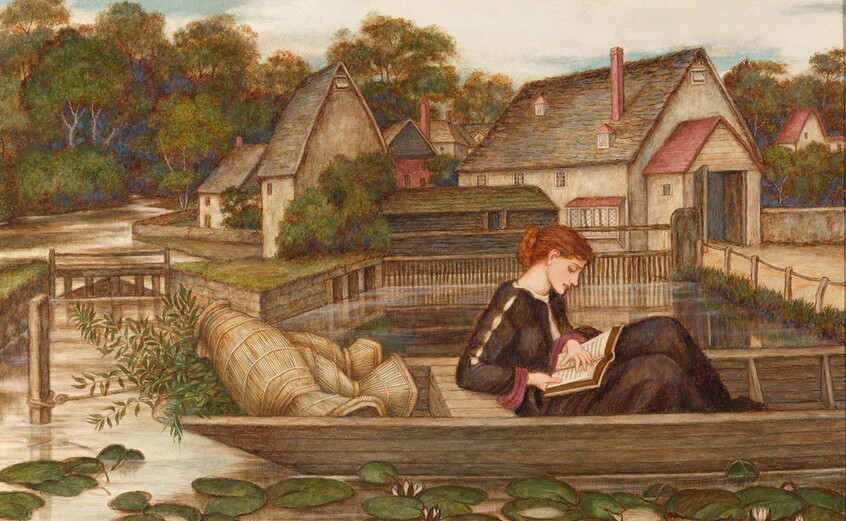 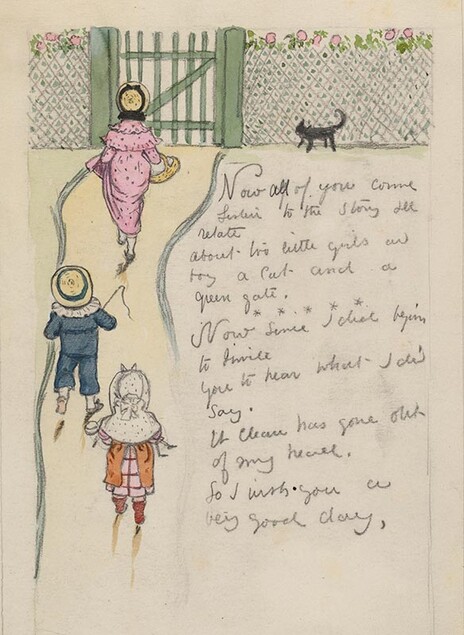 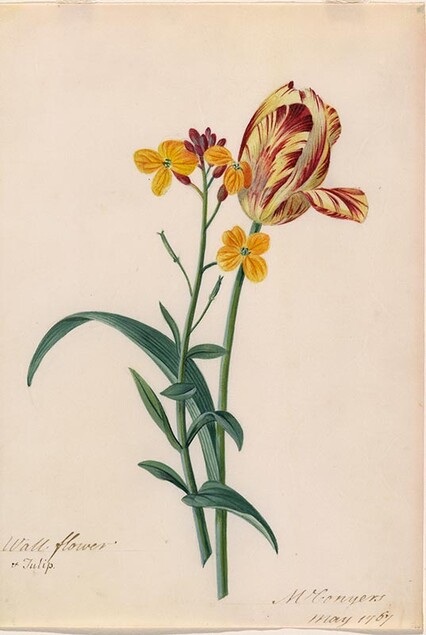 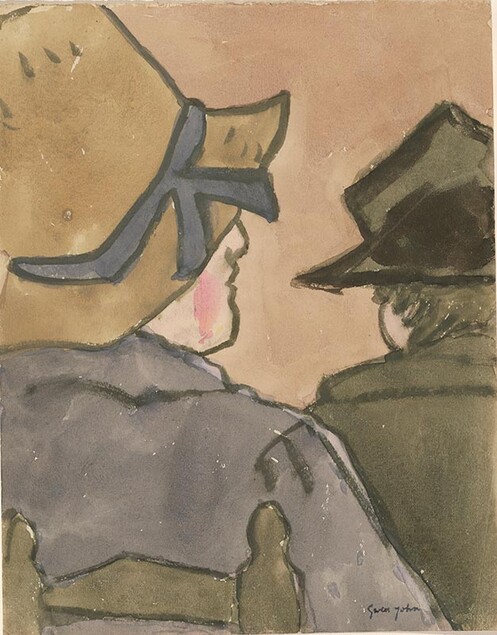 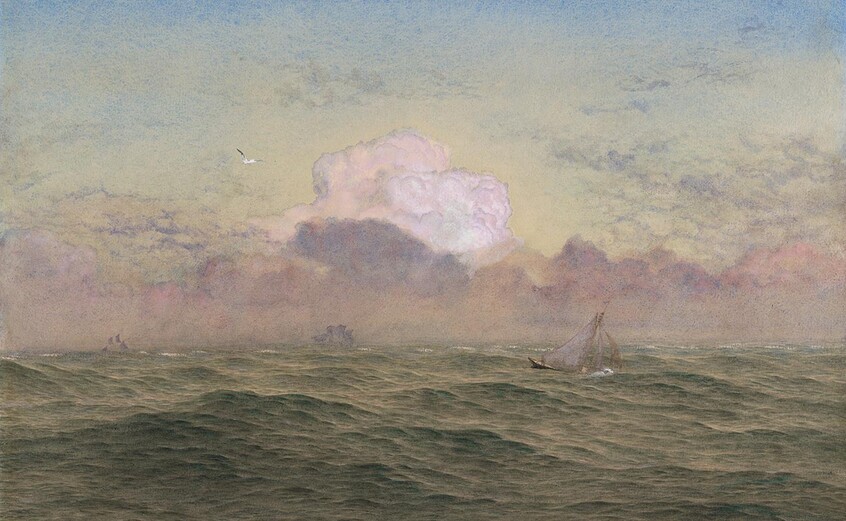 SAN MARINO, Calif.—“100 Great British Drawings,” a major exhibition at The Huntington Library, Art Museum, and Botanical Gardens, will trace the practice of drawing in Britain from the 17th through the mid-20th century, spotlighting The Huntington’s important collection of more than 12,000 works that represent the great masters of the medium. On view June 18 through Sept. 5, 2022, in the MaryLou and George Boone Gallery, the exhibition will feature rarely seen treasures, including works by William Blake, John Constable, Thomas Gainsborough, and J. M. W. Turner, as well as examples by artists associated with the Pre-Raphaelite Brotherhood and early 20th-century modernism. A fully illustrated catalog accompanies the exhibition, examining for the first time the strength and diversity of The Huntington’s British drawings collection, a significant portion of which has never been published before. The Huntington is the sole venue for the exhibition.

“The Huntington is renowned for its incomparable collection of British art, ranging from 15th-century silver to the graphic art of Henry Moore, with the most famous works being, of course, our grand manner paintings,” said Christina Nielsen, Hannah and Russel Kully Director of the Art Museum at The Huntington. “Thomas Gainsborough’s Blue Boy and Thomas Lawrence’s Pinkie often serve as the poster boy and poster girl for the whole institution. But what most visitors do not realize is that The Huntington is also home to an extensive and remarkable collection of British drawings. This exhibition and catalog, the first to show the range of our British works on paper on such a scale, seek to fill that knowledge gap.”

Most of The Huntington’s British drawings collection, with a few notable exceptions, was established after the time of the institution’s founders, Henry and Arabella Huntington. Henry was an avid collector of rare books and manuscripts, and his wife, Arabella, was the force behind their collection of paintings and decorative art, but drawings did not factor largely into their art purchases. It was Robert R. Wark, curator of the art collections from 1956 to 1990, whose vision and tenacity established The Huntington as an outstanding repository of drawings made in Britain, where the art form was especially well developed, particularly in the late 18th to mid-19th century.

“Drawing is the most spontaneous and intimate of art forms, revealing the thoughts and mood of the artist through the stroke of a pen or touch of a brush dipped in watercolor,” said Melinda McCurdy, curator of British art, curator of the exhibition, and author of the catalog. “It is a practice especially associated with British artists, whose serious engagement with the medium is on vibrant display in the works we highlight in this exhibition.”

The art of drawing first flourished in Britain in the late 17th century with an influx of artists coming from continental Europe, where the practice was commonly a part of artistic training. British artists also traveled abroad to view and copy the works of Europe’s old masters and contemporary artists. While portraiture was the most popular British art form at the time (as polished works by John Greenhill and Edmund Ashfield demonstrate in the exhibition), British artists eventually embraced a wide range of subjects, from landscape painting to history painting, a genre that appealed to such 18th-century titans as Thomas Gainsborough and George Romney.

Romney was unique among his peers in that he saw drawing as an end in and of itself, rather than merely a tool in preparation for oil painting. His Cimon and Iphigenia (early 1780s) was inspired by a tale from Boccaccio’s Decameron, and it captures the moment at which shepherd Cimon first spies his love, Iphigenia, asleep with two other women. Romney chose to depict Iphigenia in a sensual embrace with one of the women, using sweeping strokes of ink to imbue the scene with energy and passion. Cimon is barely present—cut off on the left of the frame—adding a suggestion of erotic voyeurism to Romney’s interpretation.

Even William Blake, famous for his unique imagination, betrays his European influences in Hecate or The Night of Enitharmon’s Joy (1795). Made by using a complex mix of printing techniques, drawing, and watercolor, Hecate depicts the witchlike mythological figure with musculature that recalls Michelangelo’s female forms, which were sketched from male nudes. By applying Michelangelo’s approach, Blake gives Hecate a powerful physique that suggests an unnatural, occult strength. The large-scale work is drawn from The Huntington’s William Blake collection, which was established by Henry Huntington himself and easily ranks among the most important Blake collections in the world.

Most of the works in The Huntington’s British drawings collection are from the 18th and 19th centuries, when drawings and watercolors became popular commodities. Watercolors, though less forgiving than oil, allow artists to create luminous effects and are well suited to capturing the misty English climate. J. M. W. Turner was a master of these atmospheric effects. His Beaumaris Castle, Anglesey (ca. 1825–36) uses layered washes of color to create a soft fog that obscures people, horses, buildings, and ships, blending the line between sea and land. In its exploration of artistic techniques, the exhibition will look at the pigments and paper that artists used. Turner, for example, required a strong paper that could withstand his method, described by an eyewitness as first saturating the paper with wet paint. Then, “he tore … scratched … scrabbled at it in a kind of frenzy” until the image emerged as if by “magic … with all its exquisite minutia.”

By the mid-19th century, transparent watercolor technique gave way to an interest in opaque pigments or gouache, in keeping with a Victorian-era taste for sharp-focus realism. Many of the Victorian works in the exhibition were created as illustrations to poems or stories, including Samuel Palmer’s watercolor and gouache Lonely Tower (ca. 1881), which was inspired by John Milton’s Il Penseroso, and popular children’s book illustrator Kate Greenaway’s watercolor and graphite Now All of You Come Listen (ca. 1879). Some works from this period—such as those by artist Edward Burne-Jones, who was associated with the Pre-Raphaelites and collaborated with designer William Morris—demonstrate a turn away from realism toward pure “art for art’s sake,” a notion affiliated with the Aesthetic movement.

Drawings from the first half of the 20th century reveal the extraordinarily wide array of artistic styles that were emerging at the time. Many of The Huntington’s works from the period are by artists from the Slade School of Fine Art in London, where students studied abstraction, French Impressionism, Fauvism, Expressionism, Cubism, and Surrealism. A highlight of this group is Gwen John’s Two Hatted Women in Church (1920s), a work in water-based transparent paint that she made when living in France. John attended church there regularly, where she would draw the congregation, focusing less on the individuals and more on the shapes she saw in their clothing, their varying postures, and the chairs they sat on. John asserts her modernism in the painting, said McCurdy, as she “wittily juxtaposes two differently shaped hats, abbreviating such descriptive details as facial features and composing the image with bold black outlines and broad washes of muted tones.” The exhibition includes several other arresting 20th-century works on paper in various styles by such artists as David Bomberg, Paul Nash, and John Piper.

The 20th-century works combine with the others in “100 Great British Drawings” to create a display that reveals the infinitely diverse aspects of “mark making,” said Ann Bermingham, professor emeritus of the history of art and architecture at the University of California, Santa Barbara, in her essay for the exhibition catalog. She concludes, “If The Huntington drawings speak to us over the distances of time and space, it is because they still hold in their linear grasp the thrill and promise of endless creativity.”

Originally part of The Huntington’s Centennial Celebration, this exhibition has been made possible by the generous support of Avery and Andrew Barth, Terri and Jerry Kohl, and Lisa and Tim Sloan.

Related Catalog
To complement the exhibition, The Huntington will publish with Lund Humphries Excursions of Imagination: 100 Great British Drawings from The Huntington’s Collection. The 256-page, fully illustrated exhibition catalog is by Melinda McCurdy, curator of British art at The Huntington; with Ann Bermingham, professor emeritus of the history of art and architecture at the University of California, Santa Barbara; and Christina Nielsen, Hannah and Russel Kully Director of the Art Museum at The Huntington. The book features an introduction by McCurdy discussing the formation of The Huntington’s British drawings collection and an essay by Bermingham that places The Huntington’s collection within the context of the historical practice of drawing in Britain. The catalog will be available Jan. 4, 2022, for $45 at the Huntington Store or online at thehuntingtonstore.org.

Support for this catalog is provided by Furthermore: a program of the J. M. Kaplan Fund.

About The Huntington
The Huntington Library, Art Museum, and Botanical Gardens, a collections-based research and educational institution, aspires to be a welcoming place of engagement and reflection for a diverse community. The Huntington is located at 1151 Oxford Road, San Marino, California, 12 miles from downtown Los Angeles. Visitor information: huntington.org or 626-405-2100. (Check huntington.org for visitation protocols due to COVID-19.)