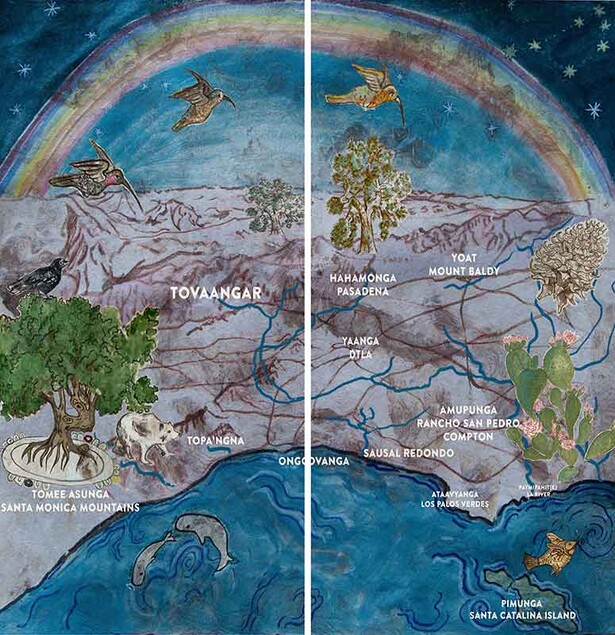 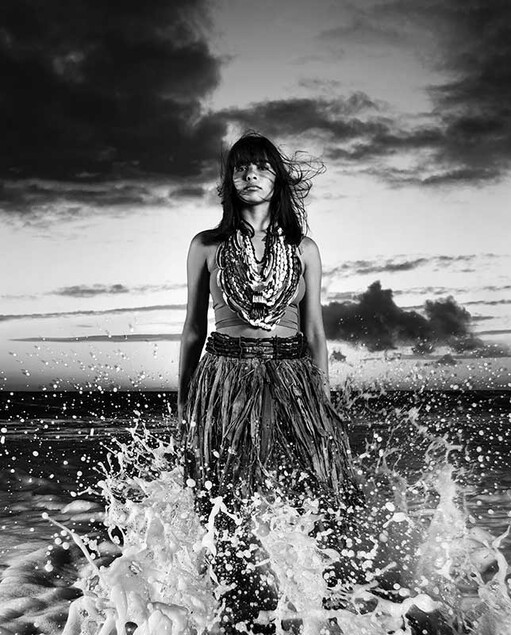 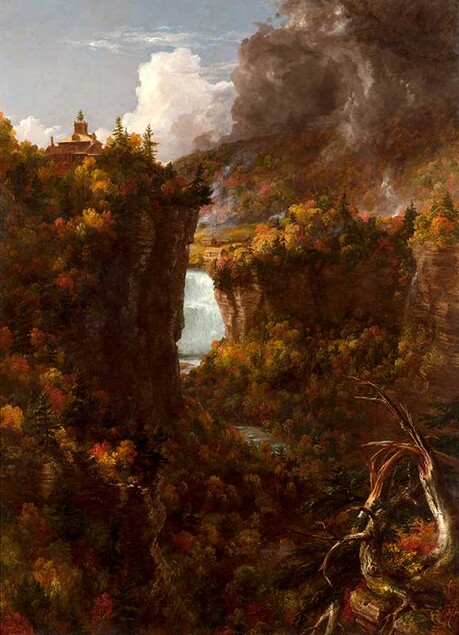 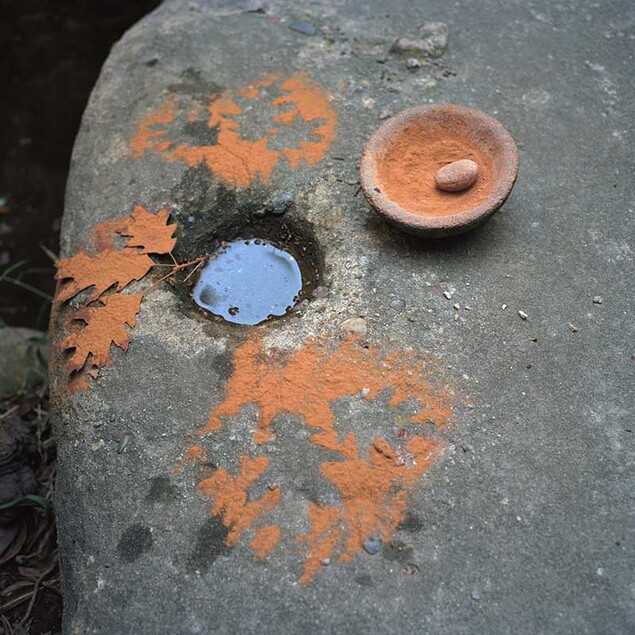 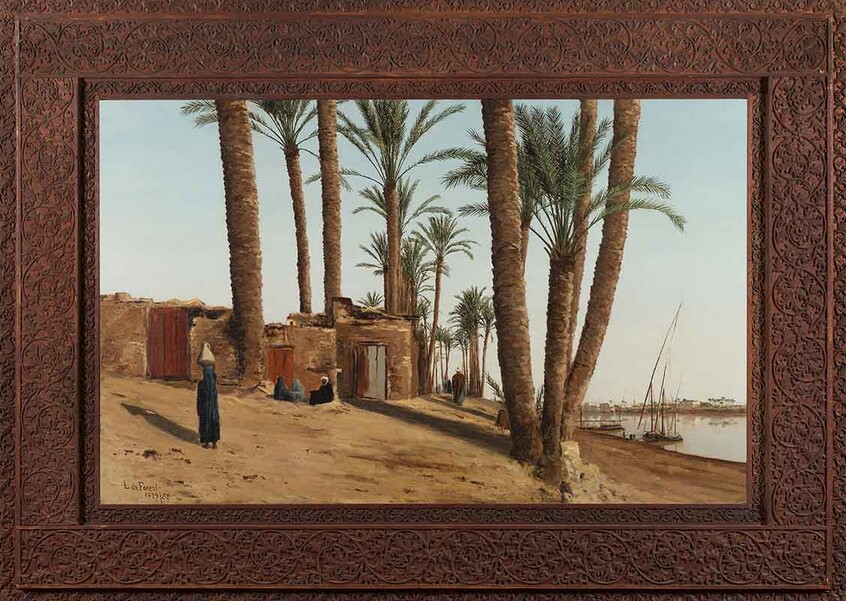 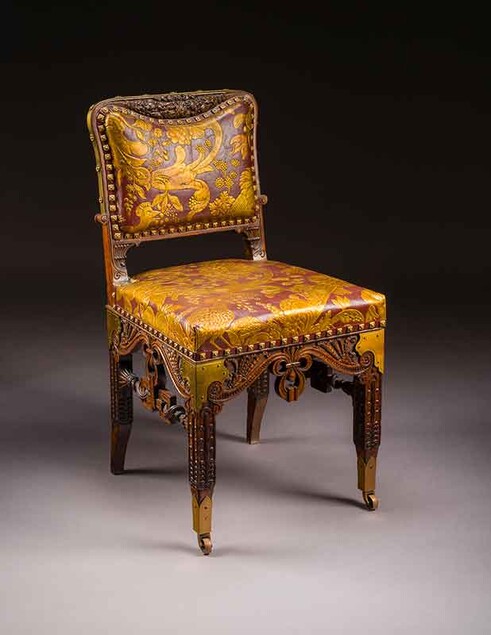 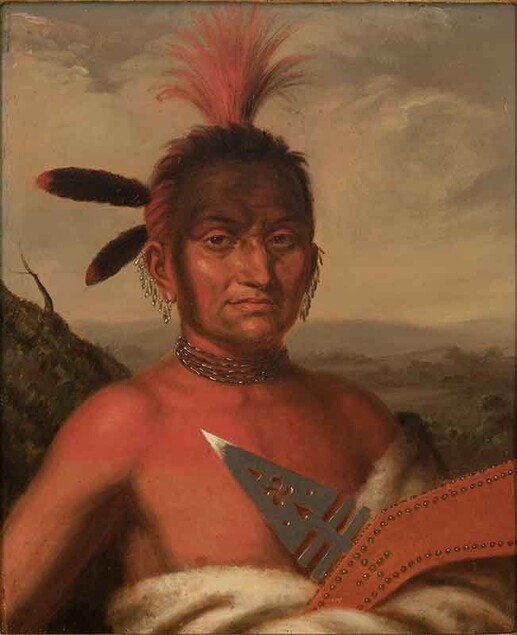 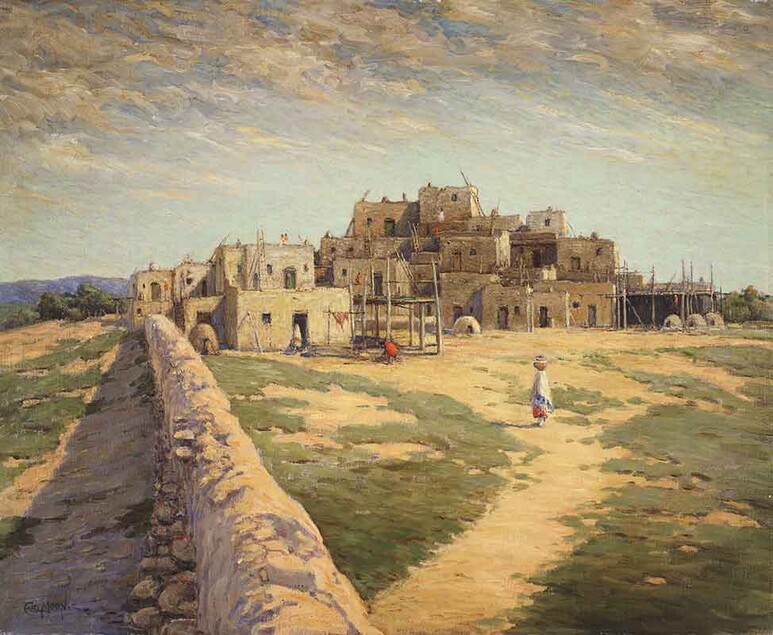 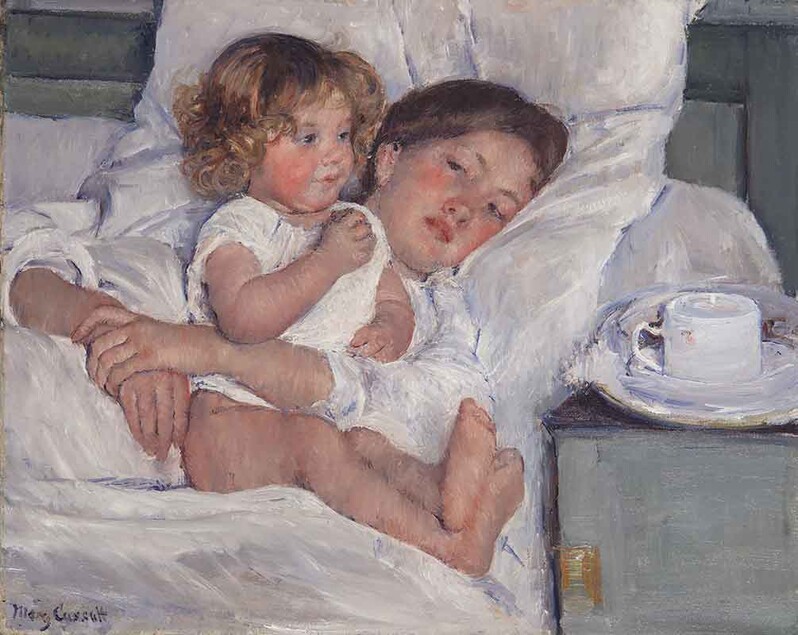 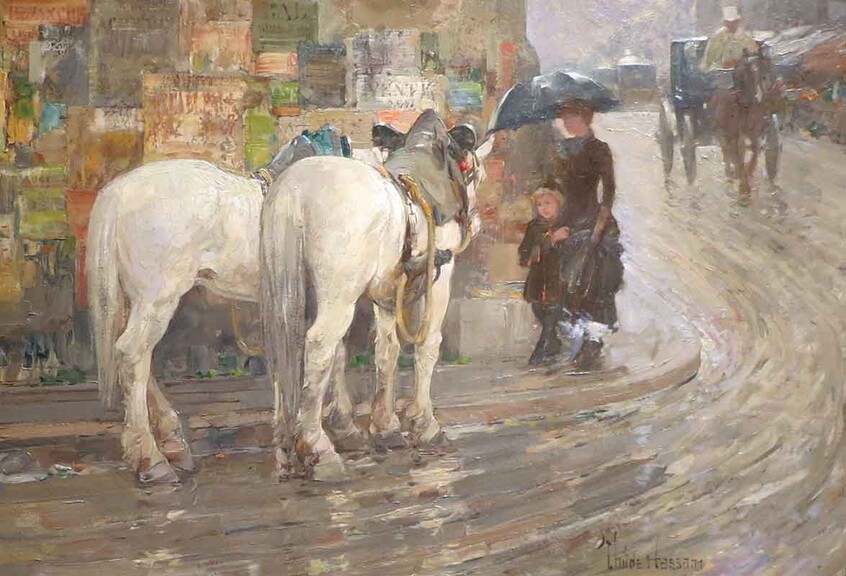 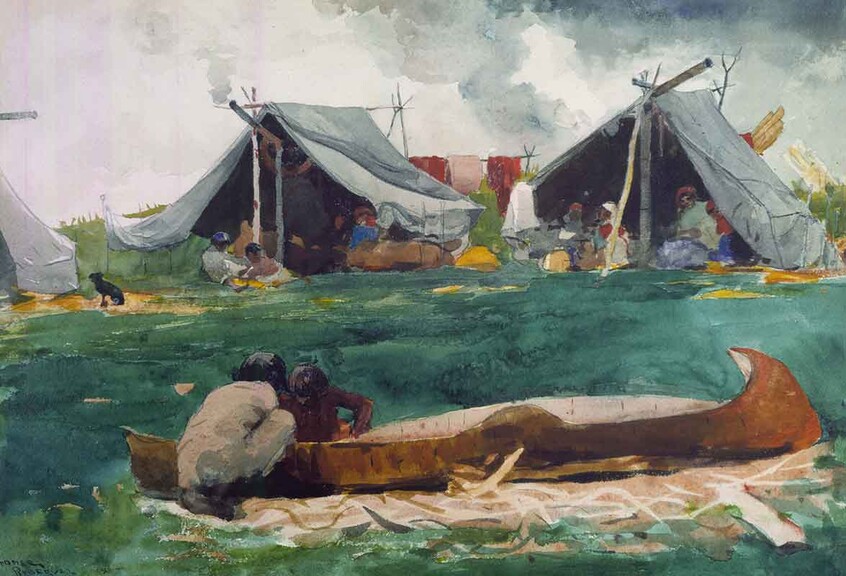 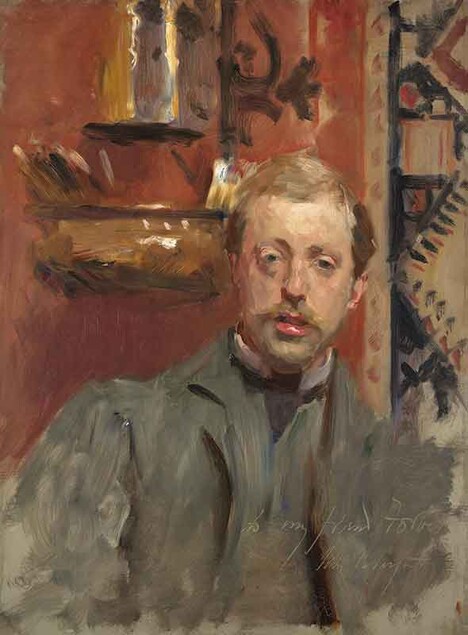 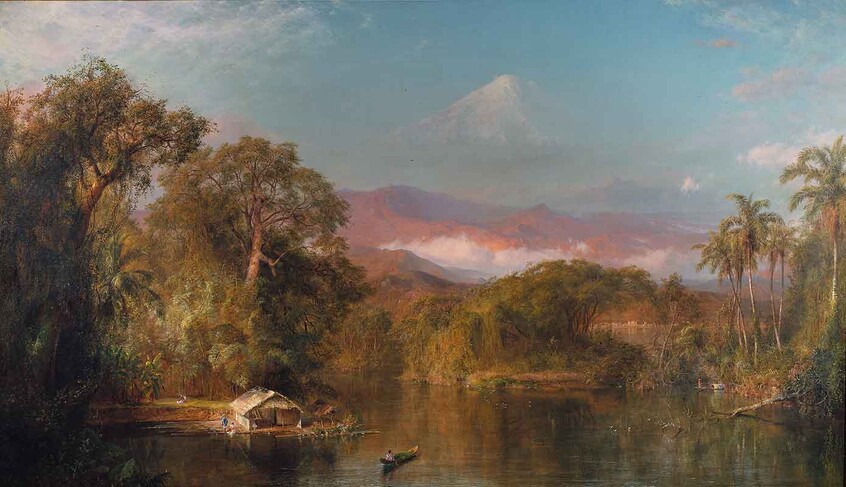 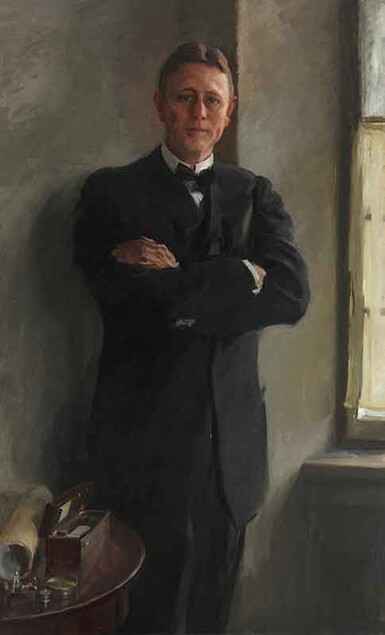 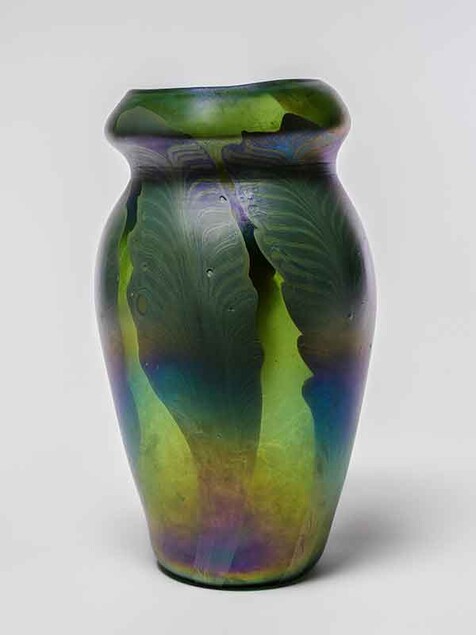 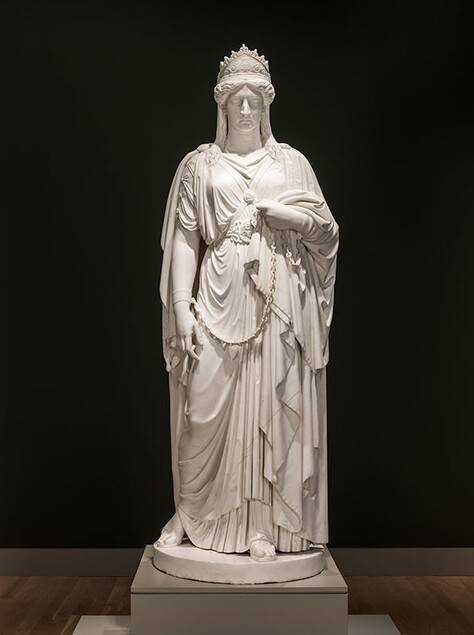 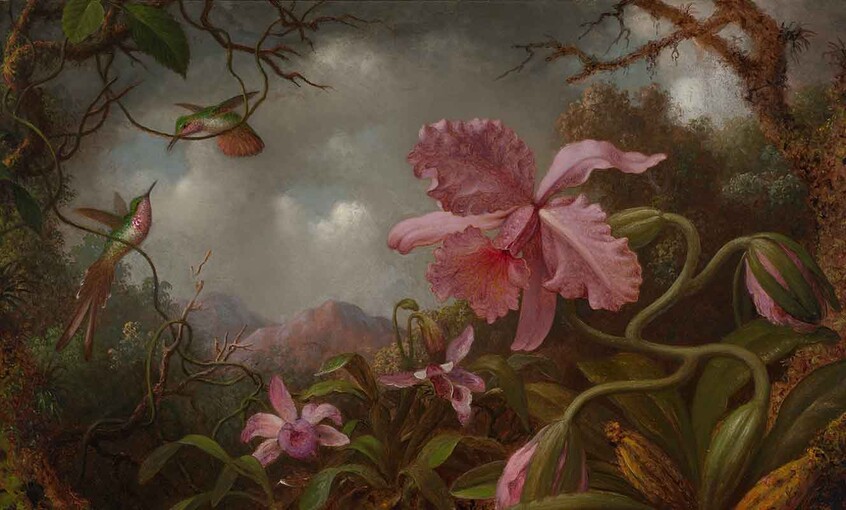 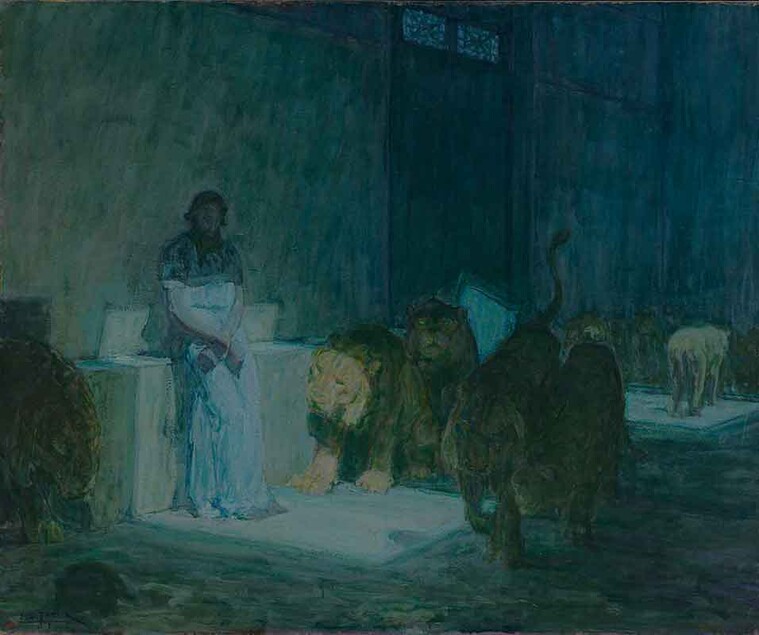 SAN MARINO, Calif.—The Huntington Library, Art Museum, and Botanical Gardens is set to open “Borderlands,” a new permanent collections installation that explores a more expansive and contextualized view of American art history. Envisioning American art through the theme of borderlands, the exhibition will debut several new works and new acquisitions to the museum’s American art collection, including works by women, Native American, and Latinx artists. “Borderlands” opens Nov. 20, 2021, in a suite of rooms in the Virginia Steele Scott Galleries of American Art.

The exhibition is a reinstallation of portions of The Huntington’s American art collection that date from the 19th through the early 20th century, including works by such renowned artists as Mary Cassatt, Frederic Edwin Church, Thomas Eakins, and Winslow Homer. New acquisitions on view include photographs by contemporary artists Mercedes Dorame and Cara Romero and a celebrated painting by Thomas Cole, among others. To develop the installation, The Huntington partnered with two contemporary artists, Enrique Martínez Celaya (2020–22 Huntington Fellow in the Visual Arts) and Sandy Rodriguez (2020–21 Caltech-Huntington Art + Research Fellow), and secured strategic loans to help re-imagine the historical collections from multiple perspectives.

“The Huntington has a responsibility to convey the relevance of historical collections to contemporary audiences and to consider our shared past from multiple perspectives, as we begin to create a vision for the future,” said Christina Nielsen, Hannah and Russel Kully Director of the Art Museum at The Huntington. “‘Borderlands’ addresses these goals by presenting a more expansive history of American art in a beautiful and thought-provoking installation—from the re-imagined entrance area through a freshly conceived group of galleries, where objects interact with one another in new ways, drawing connections across media, time, and cultures.”

“Borderlands” occupies roughly 5,000 square feet of gallery space, featuring more than 70 works. Centering themes of place and migration, the reinstallation explores sites of cultural convergence—like Los Angeles—as well as the movement of artists and materials across borders and oceans, to reveal the global and hemispheric nature of American art. It is organized along four themes: Homelands, Crossing Borders, Americans Abroad, and Breaking Barriers. There’s also an education room, where visitors can learn about locally sourced botanical- and mineral-based pigments.

“To envision the arts in America in terms of the ‘borderlands’ metaphor, we looked at how artworks have registered the crossing of geographic, political, social, linguistic, and personal boundaries,” said Dennis Carr, Virginia Steele Scott Chief Curator of American Art at The Huntington, who leads the project. “The history of the United States has been shaped by innumerable borders, whose endurance or dissolution continue to impact us today.”

A thematic anchor in the exhibition is a new 8-foot-by-8-foot watercolor painted by Los Angeles–based artist Sandy Rodriguez. For the work, Rodriguez used locally sourced pigments and colorants, derived from mineral and organic sources, and 23-karat gold applied to amate paper, a native fig-bark paper that was traditionally used in Mexico but outlawed by the Spanish in the 16th century. Rodriguez’s YOU ARE HERE / Tovaangar / El Pueblo de Nuestra Señora la Reina de los Ángeles de Porciúncula / Los Angeles is a multilingual map of the greater Los Angeles area, representing the topography, language, flora, fauna, and land stewardship in the region over time and illustrating the movement and histories of peoples who have called—and continue to call—the area home. A new video on Rodriguez’s work can be viewed at huntington.org/videos-recorded-programs.

“Like Sandy’s work, we hope ‘Borderlands’ will inspire visitors to consider the relationship between art and land with respect to artistic materials, the movement of artists and objects, and how depictions of the landscape can express and affect our relation to it—and to each other,” Carr said.

Martínez Celaya's There-bound is painted inside the massive glass façade of the Scott Galleries' north entrance. It depicts various kinds of migratory birds winging across the building's front windows. Martínez Celaya's project, like the exhibition as a whole, seeks to place the inside of the galleries in dialogue with the famous landscapes and living collections at The Huntington. The glassed-in lobby and loggia exude a chapel-like effect when the work is illuminated by sunlight. Martínez Celaya has also designed handmade seating for the space that will invite visitors to linger and enjoy the view of the garden and the San Gabriel Mountains beyond.

Homelands
The first room in the installation, called “Homelands,” centers on Rodriguez’s work. A painter who was raised on the California-Mexico border, Rodriguez investigates the methods and materials of painting across cultures, focusing in particular on Indigenous histories and knowledge. In addition to YOU ARE HERE, the room features her drawings of botanical species that yield pigments and medicinal treatments for respiratory illnesses or susto (trauma), all of which are especially poignant in the wake of the coronavirus pandemic. A single accordion-fold book (a traditional Mexican book form) records Rodriguez’s careful study of botanical specimens at The Huntington. Also debuting in this room is a newly acquired 1824 painting of Ioway Chief Moanahonga (Great Walker) by the artist Charles Bird King and photographs by Native American artists Mercedes Dorame and Cara Romero.

Crossing Borders
Another gallery invites visitors to explore the relationship between landscape and American expansion and exploration in the 19th century with paintings by such artists as Albert Bierstadt, Frederic Edwin Church, Martin Johnson Heade, and Thomas Moran. Many of the featured artists crossed borders, depicting the farthest reaches of the American continent. In this room, the recently acquired, monumental painting Portage Falls on the Genesee (ca. 1839) makes its Huntington debut. This room explores, among other themes, how artists often erased Indigenous presence, picturing a landscape devoid of human occupation and ready for economic exploitation. “This colonialist view embodied a land-centered conception of nationhood, at a time when landscapes were becoming profoundly altered by rising development and industrialization,” Carr said.

Americans Abroad
Another “Borderlands” room features American artists working abroad. In the late 19th and early 20th centuries, unprecedented numbers of American artists traveled abroad to connect with Europe’s history and its flourishing modern art scene. Some found greater freedom from the strictures of race, sexuality, gender, and class than they did at home. Artists were especially inspired by Impressionism, the Aesthetic Movement, and Art Nouveau, represented in this gallery by the works of Cecilia Beaux, Mary Cassatt, Thomas Eakins, Childe Hassam, John Singer Sargent, Lockwood de Forest, and Louis Comfort Tiffany, among others. The newly acquired painting Bank of the Nile Opposite Cairo, Egypt (1879–86) by Lockwood de Forest is on view in this room. In addition to Europe, many artists looked to Asia and the Middle East, appropriating non-Western forms and motifs.

Breaking Barriers
Nearby, Zenobia in Chains, Harriet Goodhue Hosmer’s monumental marble sculpture, shares a space with Henry Ossawa Tanner’s painting Daniel in the Lions’ Den, which is on loan from the Los Angeles County Museum of Art. “These works each speak to the idea of breaking down barriers,” Carr said. Hosmer’s life, like that of the ancient queen she sculpted, was defined by rebellion. In her 20s, Hosmer moved to Rome to become a professional sculptor, finding support from a circle of creative expatriate women who broke 19th-century social expectations by living alone, pursuing artistic careers, and, as was the case for Hosmer, being open about their queer identity. Hosmer became one of the most successful American sculptors—male or female—of her era. Nevertheless, when Zenobia was exhibited in the 1862 Great London Exposition, some male critics wrote that a woman could not possess the skill or strength to execute such a monumental work.

Tanner’s painting in this section highlights the work of artists of color in the 19th century. Tanner, an African American artist born in Pittsburgh, gained international acclaim for his paintings, including those with religious themes like Daniel in the Lions’ Den. The fact that Tanner chose to depict Daniel—a biblical character unjustly condemned to death—can be read in the context of the systemic persecution of Black Americans, both in Tanner’s time and our own.

Art and Color
A new education room provides a space for multigenerational families. Didactic displays, developed in partnership with artist Sandy Rodriguez, focuses on the links between art and the natural world, exploring the botanical, mineral, and animal sources of pigments and how certain pigments traveled around the globe. One such pigment is deep-red carmine, which comes from cochineal insects that are endemic to Mexico and parts of South America. The pigment entered the global export trade in the 16th century, reaching Europe and Asia. Some of the displays link to plants growing in The Huntington’s gardens, which are visible to visitors in the areas just outside the American art galleries. Similar to Rodriguez’s artworks in “Borderlands,” this space highlights Indigenous knowledge and uses of plants, especially in relation to Los Angeles and Southern California.

Also on View
Opening concurrently with “Borderlands” is a presentation of short films by Ghetto Film School (GFS) students that showcases the next generation of American storytellers. Through a partnership between GFS and The Huntington, high school and early college students studied the Art Museum’s collections to create short films drawn from their own experiences and perspectives. Inspired by The Huntington’s collections, these films reveal the continuing relevance of historical art to contemporary creativity.

Support for this project is provided by an anonymous foundation, Carl and Sue Robertson, City National Bank, and the Decorative Arts Trust.

About The Huntington
The Huntington Library, Art Museum, and Botanical Gardens, a collections-based research and educational institution, aspires to be a welcoming place of engagement and reflection for a diverse community. The Huntington is located at 1151 Oxford Road, San Marino, California, 12 miles from downtown Los Angeles. Visitor information: huntington.org or 626-405-2100. (Check huntington.org for visitation protocols due to COVID-19.)