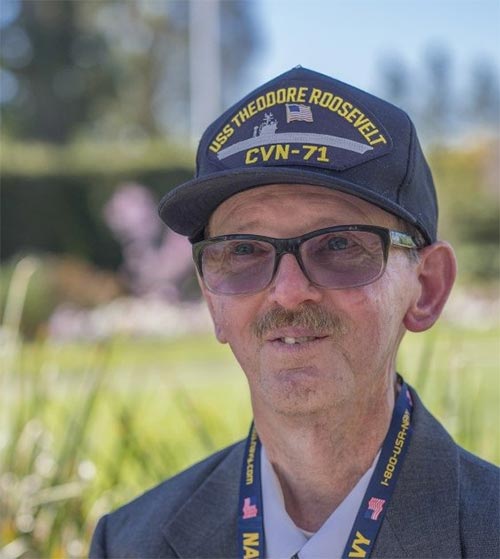 After more than four decades at The Huntington—first as a security officer and then, after retirement, as a volunteer—Ron Wardwell made the generous decision to include The Huntington in his estate plans. By doing so, he became a member of the Arabella and Henry Huntington Heritage Society, an honorary group that recognizes those who have made provisions for The Huntington in their will, trust, or other planned gift.

Ron, who passed away in 2021, was among the first to respond to a fire in the Huntington Art Gallery that had started shortly after midnight on Oct. 17, 1985. A defective fan in the elevator was thought to have been the cause.

The fire destroyed a full-length portrait of Mrs. Edwin Lascelles by Joshua Reynolds, and the gallery was closed for a full year as smoke-damaged works were painstakingly cleaned. From that night forward, Ron became a passionate advocate for fire prevention and emergency preparedness. This passion now endures with his legacy gift to The Huntington. As a beneficiary of Ron’s estate and two retirement accounts, The Huntington has established the Ronald E. Wardwell Endowment Fund. The endowment provides important support for fire safety and security—two things very close to his heart.

While the memory of the fire lingered for many years, The Huntington was fortunate to completely renovate and restore the Huntington Art Gallery in 2008. The building’s security systems were updated, and Ron’s cautionary concern for the safety of the building, its contents, and the people who move through it continued to resonate.

Over the course of his long Huntington career, Ron had seen the collections grow. He also had seen a few people grow up. Ron once recalled, “There was this little kid who followed me on my early morning rounds, and he asked about everything and about every speck of history I could remember about the place.” That kid, Randy Shulman, now The Huntington’s vice president for advancement and external relations, was among the first to shake Ron’s hand in thanks for his longsighted and generous gift intention in 2013.

To the visitors, volunteers, and Huntington staff who knew Ron, he will be remembered for his kindness, warmth, and thoughtful generosity. When asked what motivated him to support The Huntington through a legacy gift, Ron said, “The Huntington has done many good things for me over the years, and I want to support Mr. and Mrs. Huntington’s vision.”

If you’d like more information about including The Huntington in your estate plans, please contact Cris Lutz, assistant vice president of gift planning, at 626-405-2212 or clutz@huntington.org.