Plants that can tolerate occasional mild frost grow in this four-acre hillside garden on the scarp of the Raymond Hill earthquake fault. The south-facing slope is one of the warmest areas of the gardens, providing a nurturing home for plants from areas of the world with mild climates. Plantings are constantly changing in order to determine the ornamental plants best suited to the growing conditions here. A variety of trees, shrubs, perennials, and bulbs provide year-round color. Gladiolus dalenii, from which our modern hybrids derive, puts forth a burst of orange in October and November. The twigs of the golden trumpet tree (Tabebuia chrysotricha), bare in winter, are densely covered with fine, matted golden-brown hairs resembling flocking. In early spring a cluster of buds emerges from the end of each twig, and the tree erupts with a dazzling display of brilliant golden-yellow blooms. 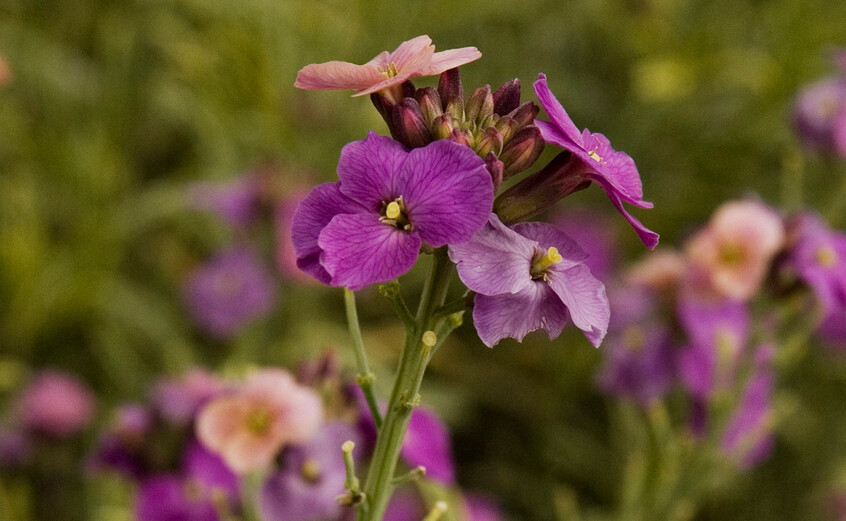 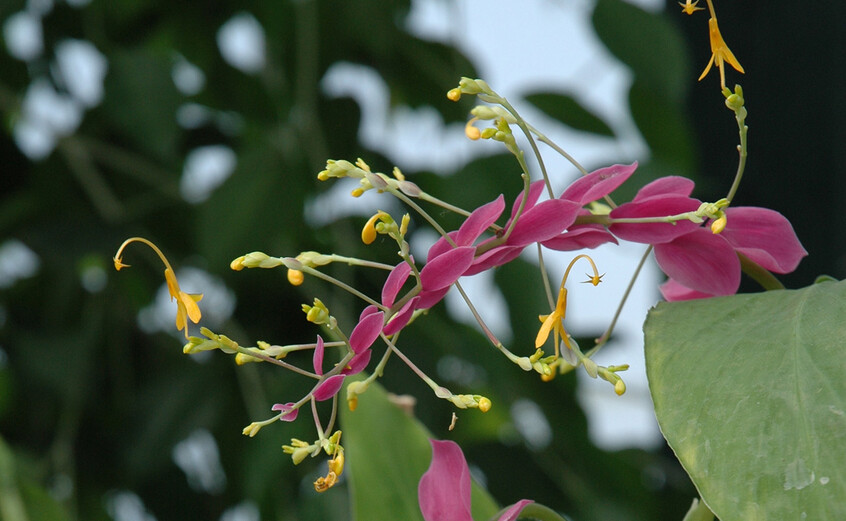 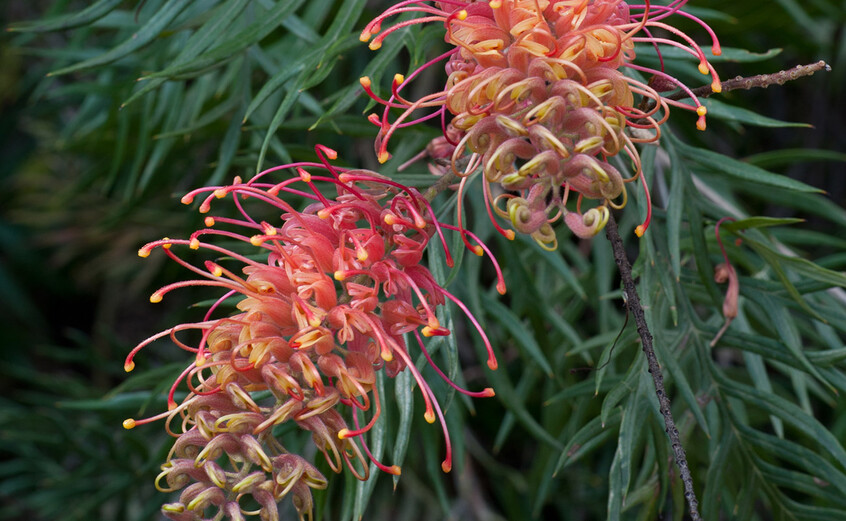 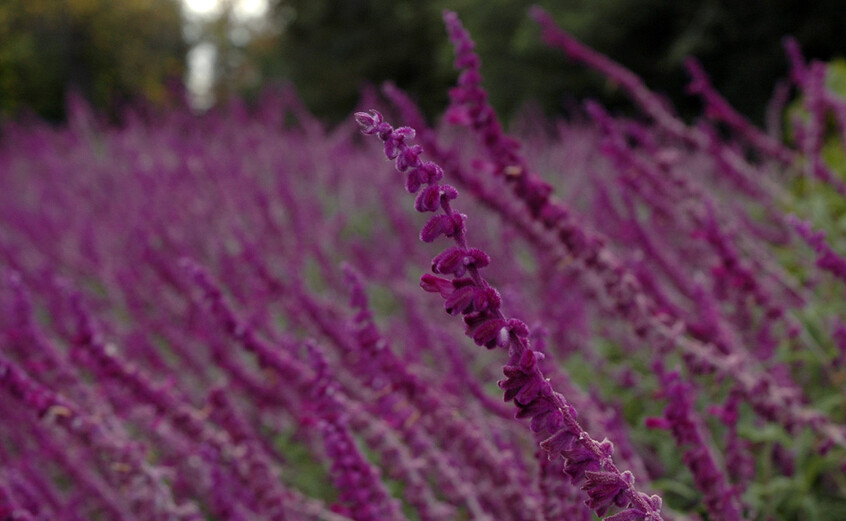 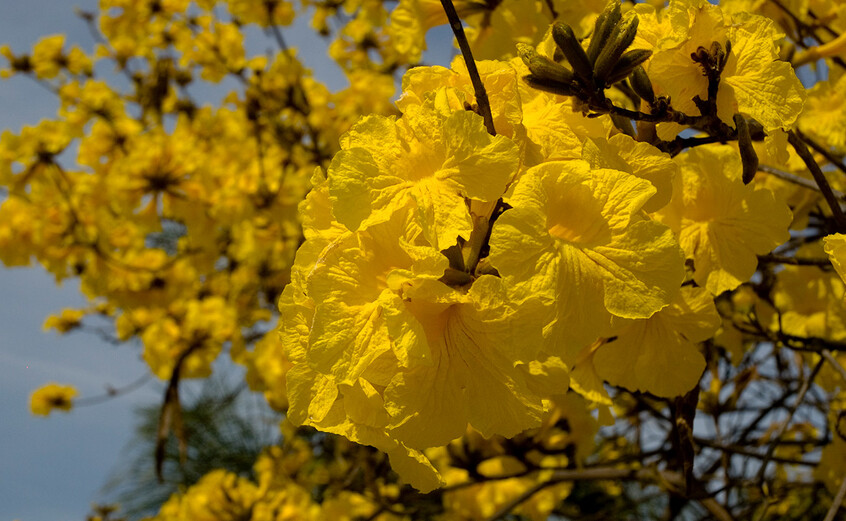 Among the noteworthy flowering trees, look for Yellow Flame Tree (Peltophorum dubium), pink Cape Chestnut (Calodendrum capense), lavender-blue Jacaranda (Jacaranda mimosifolia), and the Sausage Tree (Kigelia africana). The garden also has many species and hybrids of Salvia, with flowers in red, pink, lavender, blue, purple, yellow, and even brown. Salvia ‘Purple Majesty’ has intense purple flowers, as its name indicates, and was introduced into the plant trade by The Huntington.

A Sampling of the Subtropical Garden Collection

Wigandia urens (Hydrophyllaceae) -- A small tree in an otherwise herbaceous family, with showy clusters of blue-violet flowers in spring. Large leaves can grow up to two feet long and across, and are covered with irritating hairs.

Mimosa polycarpa var. spegazzinii (Fabaceae) – One of the “sensitive” plants whose leaves fold up when touched, a movement made possible by specialized cells at the base of the leaf stalks. The reason for this response has yet to be determined, but it is thought that the folded and drooping leaves are unattractive to herbivores.

Sausage Tree, Kigelia africana (Bignoniaceae) -- Tree from tropical southeast Africa with nectar-filled maroon flowers visited by bats, baboons, and sunbirds. Young fruits on the tree are eaten by giraffes, and by other animals after falling to the ground. Not edible by humans, and supposedly poisonous.

Forest Fever Tree, Anthocleista grandiflora (Loganiaceae) -- Tree from tropical southeast Africa with impressively large leaves. A tea made from the bitter leaves or bark is said to be effective against malaria.

Salvia (Lamiaceae) -- A large genus (900 species) particularly well-represented in Mexico and Central and South America, from which most of our plants come. Mostly shrubs or perennials, many kinds are excellent and popular garden plants, including S. leucantha, S. regla, S. greggii, and the Huntington introductions S. 'Indigo Spires’, S. 'Purple Majesty', and S. gesneriiflora 'Mole Poblano'.

Tree Cotton, Gossypium barbadense (Malvaceae) -- Also known as "sea island cotton", it produces the longest and highest quality fibers of any cotton, and is the source of the greatly-prized long-staple Gallini cotton grown in Egypt and used for fine fabrics, yarn, and hosiery.