From Compost to Collectible 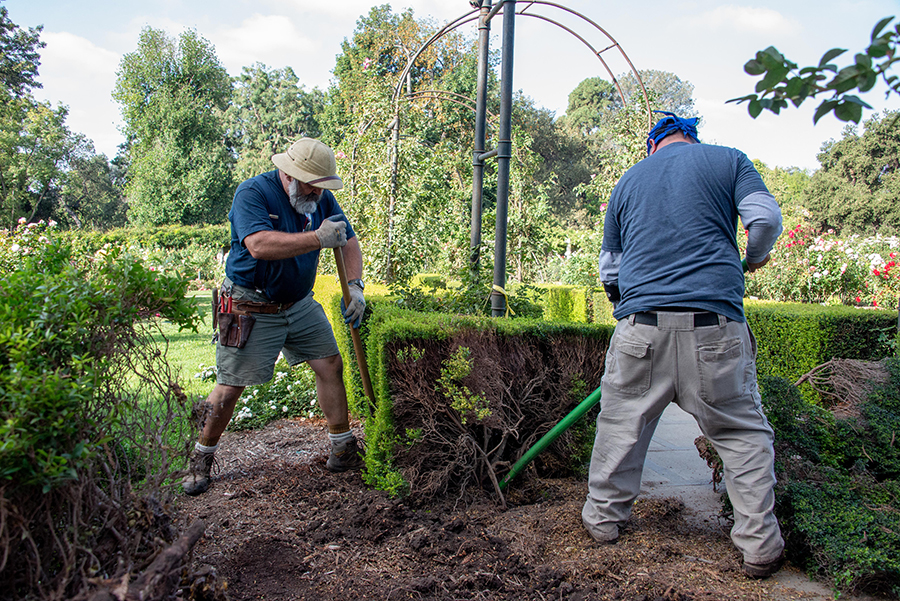 For years, the boxy myrtle hedges running through the heart of the Rose Garden have concerned Tom Carruth, the E.L. and Ruth B. Shannon Curator of the Rose Collections at The Huntington. The squared-off hedges lining the central arbor path enhanced the formality of the Rose Garden, but they also demanded a lot of water, competed with nearby climbing roses for nutrients, and required laborious shaping every few weeks. Over many decades, the hedges had grown patchy in places and were looking increasingly askew.

After three attempts to revitalize an area with new myrtle plants failed, Carruth decided to replace the hedges with rows of dwarf olive plants called Little Ollies (Olea europaea 'Montra'). The fruitless olives, with grey-green leaves that nicely complement the color of rose foliage, will eventually fill in and become squared-off hedges—and should require less water and maintenance. 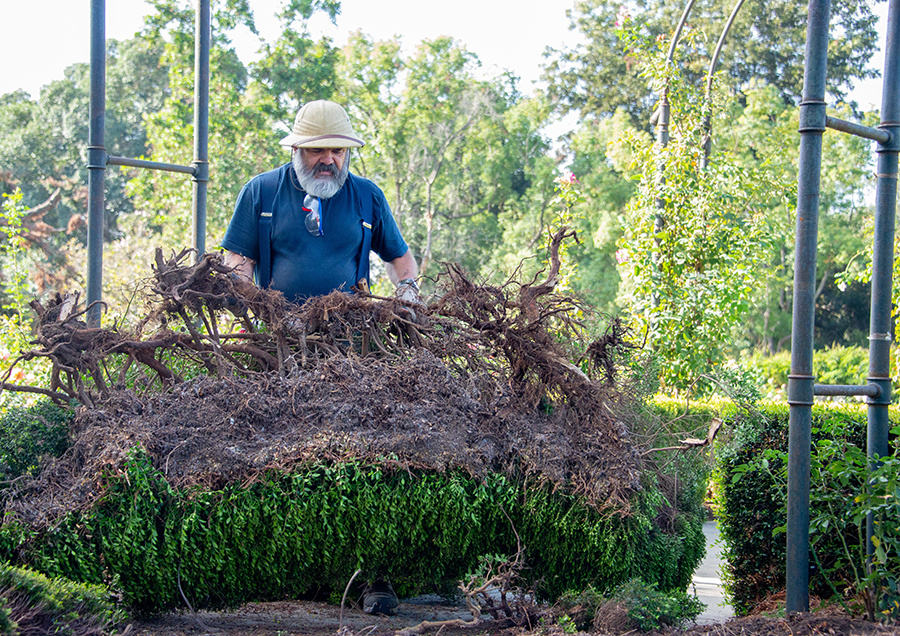 John Villarreal, chief technical gardener of the Rose Garden, examines the roots of a fully extracted myrtle hedge in the Rose Garden. Photo by Deborah Miller.

A section of the dwarf olives planted about two years ago as a test are growing in well at the edge of the path nearest the Japanese Garden and already look right at home. "We like them a lot," said John Villarreal, the technical gardener for the Rose Garden who has been working with fellow rose gardener Noel Aviña to replant the hedgerows. "They're really happy here, and we love the color."

Never a fan of the original myrtle hedges, Carruth assumed the discarded plants would unceremoniously end up as compost or wood chip mulch. "They're so old and gnarly," he said. "I thought: Who would want them?"

But when Carruth mentioned the hedge removal project at a recent meeting of garden curators, Ted Matson, curator of the bonsai collections, pounced. Mature myrtles are extremely valuable for bonsai, he said, and rare as well. 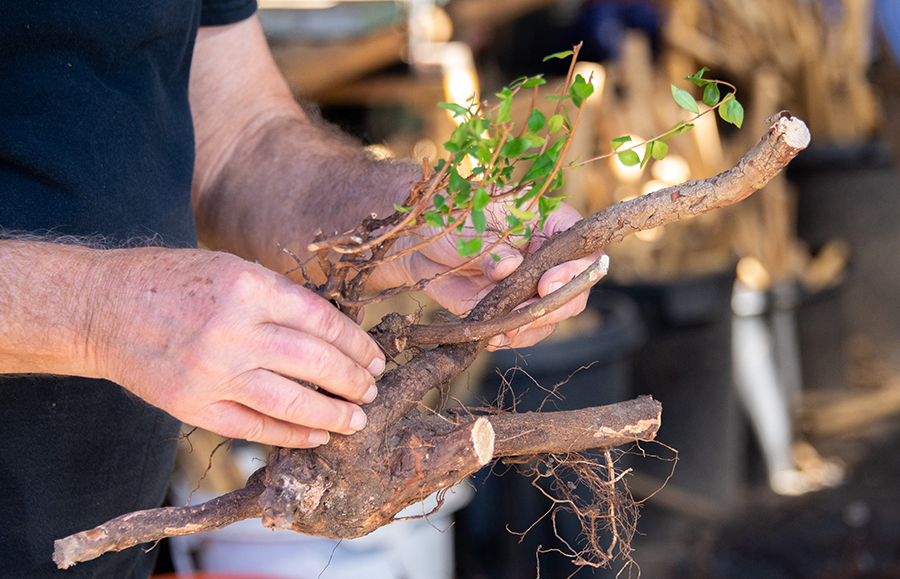 A trimmed piece of myrtle hedge that will be potted in pumice for rooting. This piece was selected for its complex and twisted shape. Photo by Deborah Miller.

"It's a really good material for bonsai, but it's hard to find plants with any trunk size because the nurseries sell only small ones," Matson said. "This is a real treasure trove."

Matson had the unearthed hedges brought to the Ben Oki Nursery behind the Japanese Garden, where he and dozens of bonsai volunteers work. They immediately got down to business with loppers, examining the discards and cutting out the roots, trunks, and branches they could use.

"Look at this movement, this flow," Matson said, pointing to a recently cropped myrtle trunk that bent dramatically to the right. "It already looks windswept." 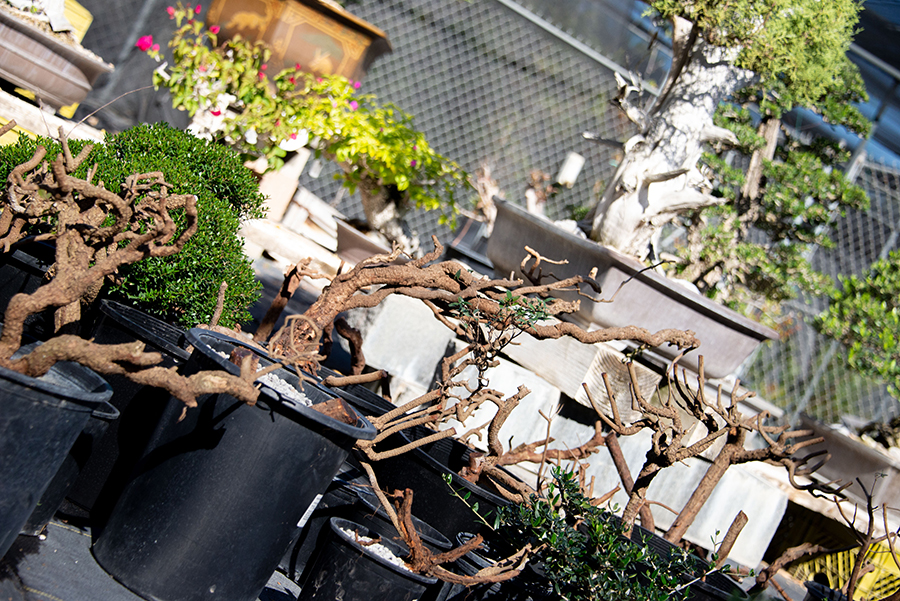 A row of hedge pieces that have been potted and await being transformed into bonsai. Photo by Deborah Miller.

One goal of bonsai artists is to create the appearance of a tree that has evolved over time: Branches weighted by age or distorted by wind; trunks that show the strength and power of age.

Matson is thrilled with the dramatic shapes he's finding in the discarded myrtle. The trunks are twisted, Matson thinks, because the decades-old hedges were forced to compete for space and light as they grew.

"Only nature gives you these weird jogs and turns," Matson said. "If a human tried to do that? Impossible."

The long hedgerows will provide hundreds of potential myrtle bonsai plants, said Matson, who has worked at The Huntington since 2010 and with bonsai for four decades. In all that time, he said, he's seen only two good bonsai trees made from myrtle. "It's just really rare," he said.

A view of the arbor path in the Rose Garden, showing the replacement dwarf olive plants in the background and the myrtle hedge in the foreground. Photo by Deborah Miller.

Matson also likes the plants because they fruit and flower as bonsai, providing seasonal interest.
Matson and his team are potting the cut trunks in pumice where they will root. The discarded trunks seem to be doing well in their new homes. Some of the plants started sending out new leaf shoots after just a week.

Matson said some of the myrtle plants will be used in bonsai workshops, while others will be sold at the annual Bonsai-a-Thon fundraiser that supports the Golden State Bonsai Federation Collection at The Huntington. And some, of course, will end up on display.

"This one is going to be stunning," he said, pointing out a trunk that stood upright but had several branches sweeping up dramatically from the trunk. "This might appear in our collections someday."