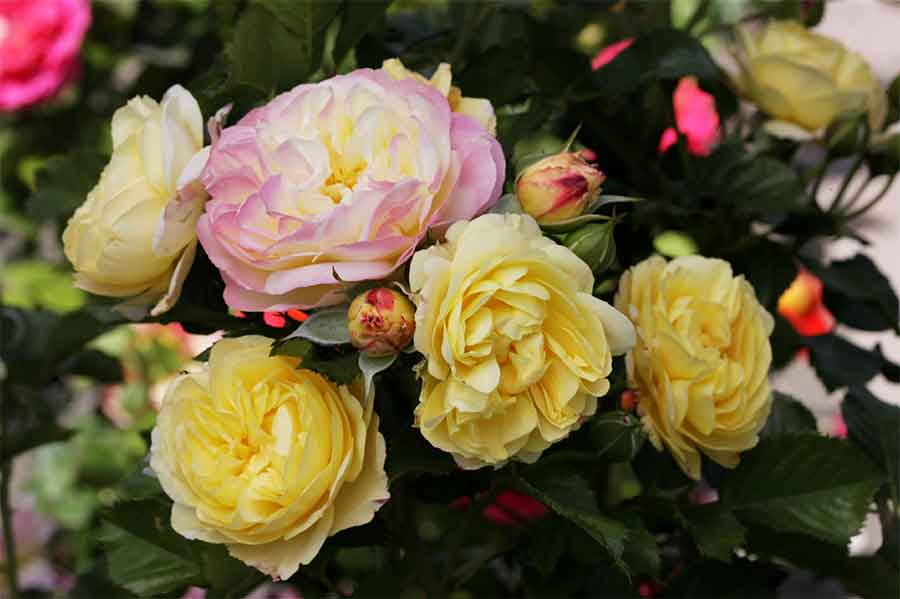 The eye-catching new rose that is helping The Huntington celebrate its centennial year was unveiled just a few months ago. But 'Huntington's 100th' got its start a decade ago, through a painstaking hybridization process that is as much art as science.

Tom Carruth has been The Huntington’s E.L. and Ruth B. Shannon Curator of the Rose Collection since 2012. Before that, he spent 25 years as a rose hybridizer, working as director of research and marketing for Weeks Roses, a wholesale rose grower, and becoming one of the nation’s leading creators of new roses. Over his career, he has introduced more than 150 new roses, including 11 All-America Rose Selections winners and four recipients of James Alexander Gamble awards, bestowed by the American Rose Society, for outstanding new and very fragrant roses.

The development of ‘Huntington’s 100th’ started long before Carruth worked at The Huntington and long before planning was underway for the institution’s Centennial. It was 2009, and Carruth was working at Weeks Roses, looking to create a wonderfully fragrant, large-flowered, repeat-blooming climbing rose. He chose as parents one rose he had previously created, ‘Julia Child’, because the rose has many climbers in its genetic background and has a unique licorice fragrance, and ‘Stormy Weather’, a deep purple and cream French climbing rose. It was one of a thousand or so crosses Carruth made in a year, hoping for some outstanding offspring.

The process starts with Carruth and his team’s pollinating the flowers of “mother” roses with pollen collected from “father” roses. This occurs in a greenhouse so that “bees aren’t doing any extra-curricular pollination,” says Carruth. Since roses can also self-pollinate, hybridization includes early removal of pollen from the mother roses. The pollen from the anthers of the rose father is then carefully applied with camel hair brushes to the sticky stigmas of the mother plant's flowers.

Anthers being clipped from a blooming rose to collect pollen, and anthers being dried so pollen can be collected and used. Photos by Gene Sasse.

If the pollination is successful, the rose hip will swell and ripen, coloring to bright yellow or orange. At this point, the hips are removed. Carruth used to harvest seed by hand, but he learned from an amateur hybridizer (who was also an automotive engineer) that it was more efficient to use a blender to break up the hips and then strain out the seeds.

The seeds are wrapped in moist paper towels and “stratified,” or refrigerated, to simulate the cold season that roses need to germinate. In a typical year, Carruth plants the seeds at the beginning of January in a raised greenhouse bed, where they are protected from birds that might eat tender seedlings as they emerge. Less than half of the hybridized seeds germinate. 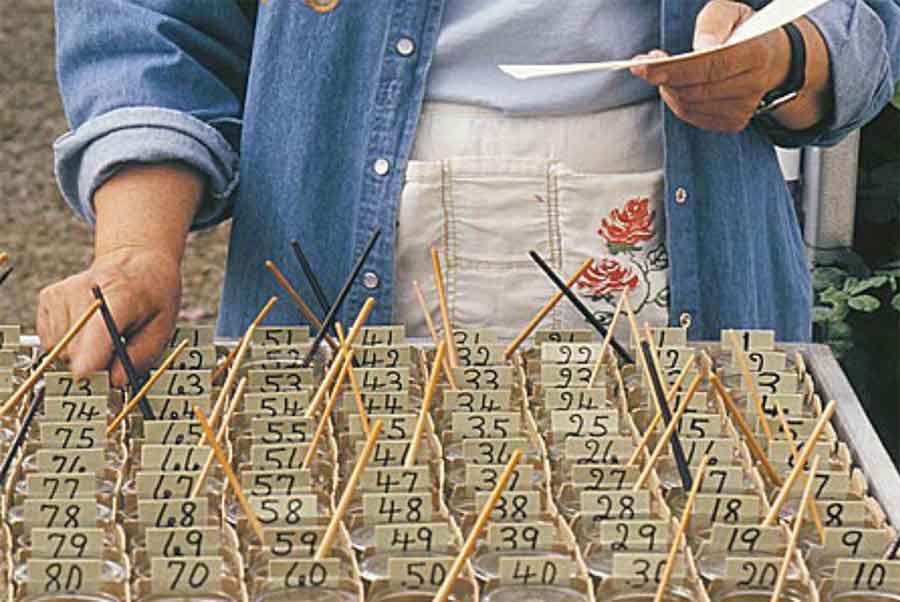 Pollen from hundreds of rose varieties is collected for use in hybridization. Photo by Gene Sasse.

By April, even though the plants are just a few inches tall, they start to flower, and Carruth can tell if they have good petal shape and disease resistance. “It’s enough of a flower to start making evaluations,” he says. Those that don’t make the cut are destroyed. From a hundred crosses, only a few make the final cut. The results can be surprising. The offspring of a single cross can all be different from one another. “It’s like children of the same parents,” says Carruth. “Each one is unique.”

Roses that seem promising provide bud wood that can be grafted onto rootstock so that large numbers of the new roses can be grown. The breeder grows more of the most promising new variety each year, continually observing its health, beauty, and disease tolerance. If it survives several seasons and still seems promising, it is then sent to test gardens around the country to see how it tolerates different levels of temperature and humidity. “At any point, you might pull the plug,” says Carruth. During the 10-year development period, many seedlings are discarded. From the quarter of a million seeds at the start, roughly four introductions may emerge. 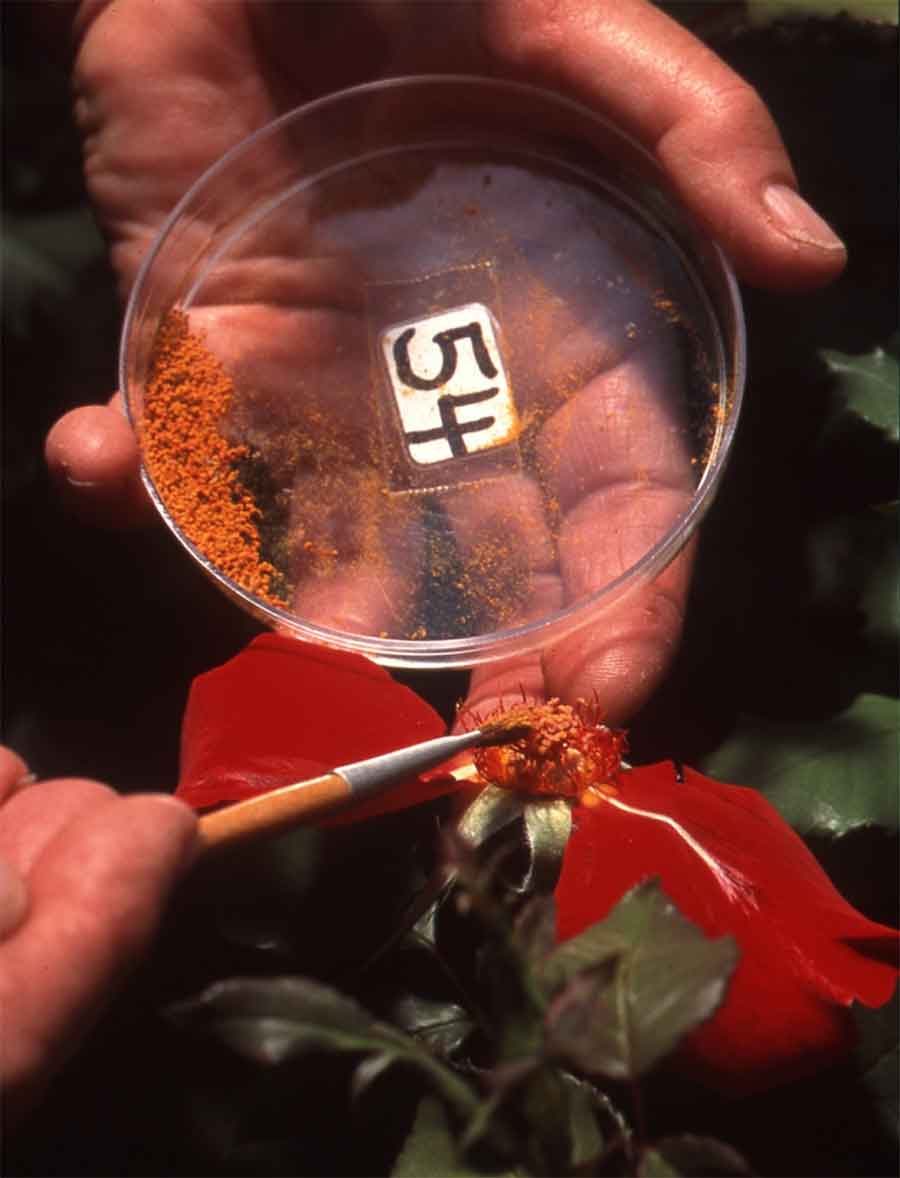 When Carruth left Weeks Roses for his new post at The Huntington, he also left behind all those crosses he had made in his final years on the job. But his replacement at Weeks, Christian Bedard, saw a lot of promise in his 2009 cross of ‘Julia Child’ and ‘Stormy Weather’, so he started growing it in large quantities. On a field trip back to the Weeks gardens in central California, Carruth happened to walk past a block of about 500 of the new roses. “The fragrance just nails you,” he said. “You walk up to it, and it just knocks you down.” When it came time to pick a rose for the Huntington Centennial, he knew this rose was the one. He describes the smell as an intense lemony fragrance with a touch of baby powder. 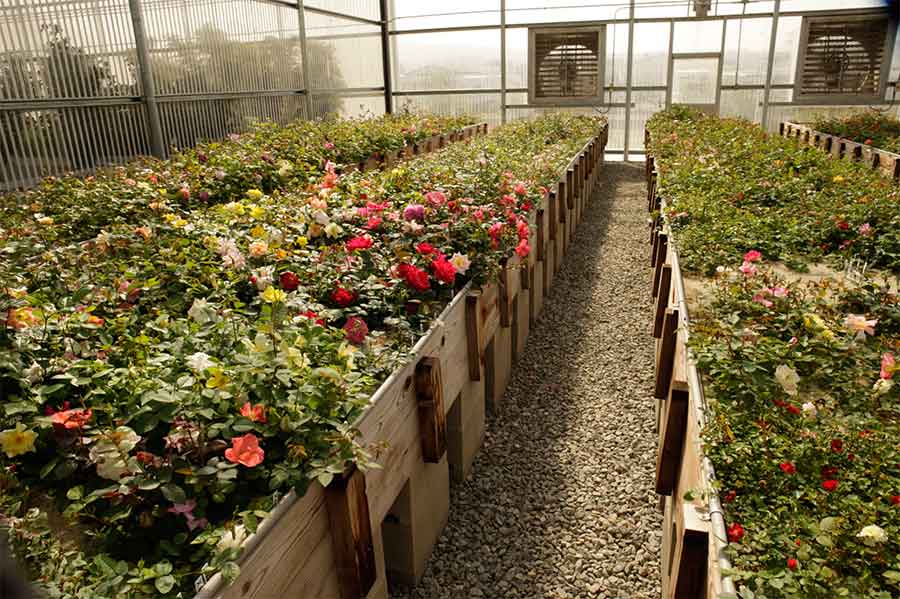 Large beds of “mother” roses waiting to be pollinated at a greenhouse at Weeks Roses. Photo by Gene Sasse.

Carruth was able to negotiate naming rights for the rose with Weeks, which means that it will carry the ‘Huntington’s 100th’ moniker as its official name but will also carry the name 'Life of the Party' on labels for nationwide marketing purposes. Some local nurseries, however, have reached out to Carruth for labels with the ‘Huntington’s 100th’ name, saying local buyers want that label and name for their rose; some nurseries are even donating a portion of the proceeds from the sale of the rose back to The Huntington, Carruth says.

If you want to see (and smell) ‘Huntington’s 100th’ for yourself, there are two clusters of the rose planted in the Rose Garden, as well as two tree roses. A group of 85 of the roses grace a new Centennial planting north of the loggia of the Virginia Steele Scott Galleries of American Art. The rose will also be offered for sale in limited quantities at The Huntington’s annual plant sale and will be offered for sale again next year as both a bare root and a potted rose. 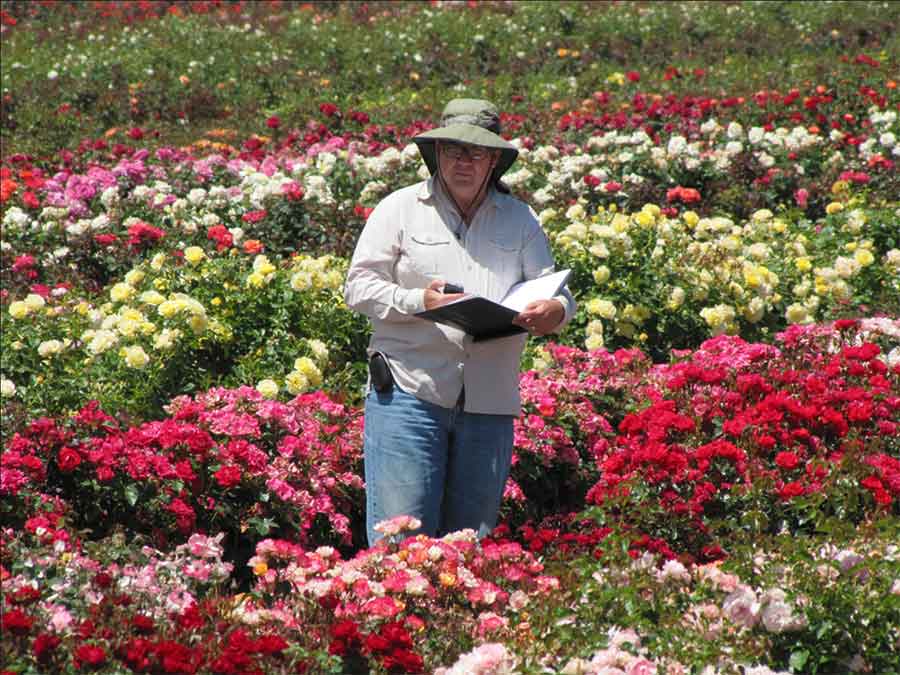 When you see the rose, you may notice it is not the climbing rose that Carruth had originally envisioned. In the art of hybridization, you do not always get what you set out to create. Sometimes, though, you get something even better. Says Carruth: “I’m really proud of this rose.”