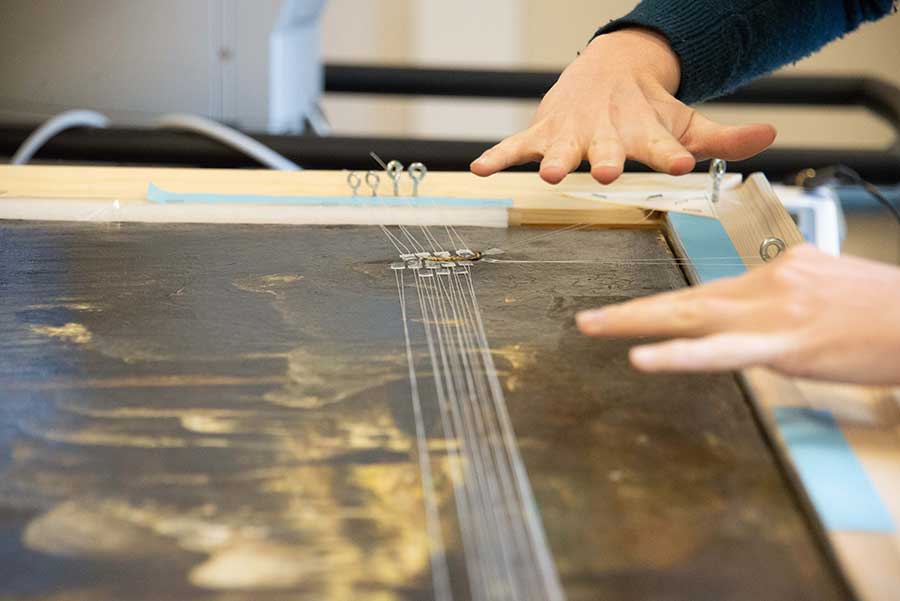 "Take every painting on a case-by-case basis." That's the mantra voiced by three members of the younger generation of conservators who worked under The Huntington's senior paintings conservator, Christina O'Connell, for several weeks in early 2019. Each of the three addressed a different painting conservation challenge from the art collection—their presence made possible by a grant from The Getty's Conserving Canvas initiative.

For centuries, those who cared for paintings backed them with another canvas to help protect the works from damage, a practice called lining. In the 1980s, this approach fell out of favor as the era of minimal intervention dawned. As a result, younger conservators have little or no opportunity to perform lining treatments.

The Conserving Canvas initiative seeks to change this situation and happily coincides with “Project Blue Boy,” the conservation of Thomas Gainsborough’s The Blue Boy (ca. 1770), the most famous painting in The Huntington’s art collection. The Conserving Canvas trainees got hands-on experience working on paintings with issues similar to those of The Blue Boy.

“This is a great opportunity for younger conservators,” says Melinda McCurdy, associate curator for British art and cocurator, with O’Connell, of “Project Blue Boy.” “The Huntington is one of a number of museums that received grants to expand this knowledge, and we’re proud to be a part of it.” 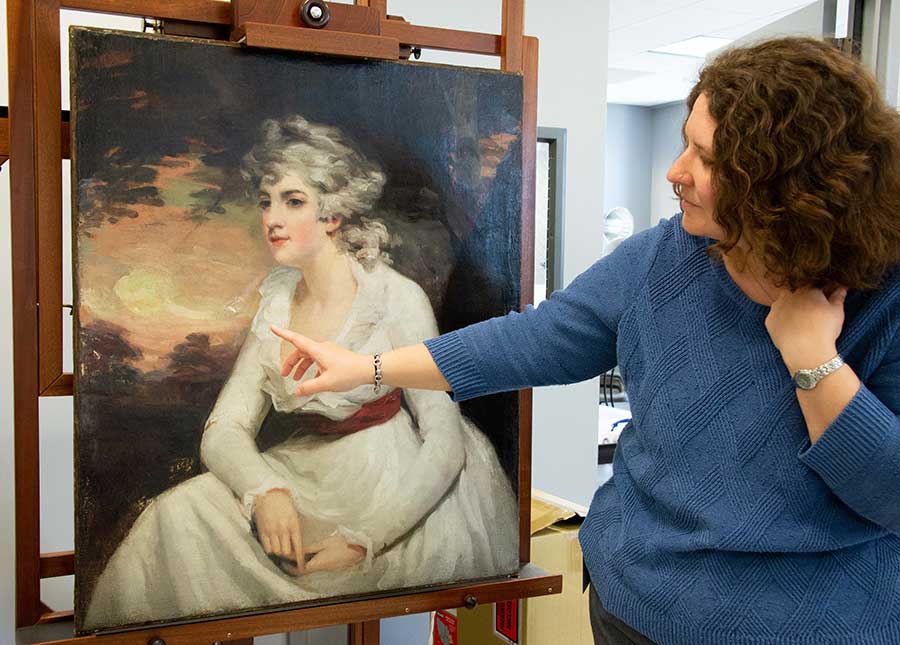 Melissa Gardner, associate conservator of paintings at the Museum of Fine Arts, Houston, points toward a problematic area on the surface of The Huntington’s Lady Elizabeth Crichton, later Viscountess Mount-Stuart (ca. 1791), after Henry Raeburn. Photo by Deborah Miller.

Melissa Gardner, associate conservator of paintings at the Museum of Fine Arts, Houston, did a case study of The Huntington’s Lady Elizabeth Crichton, later Viscountess Mount-Stuart (ca. 1791), after Henry Raeburn.

Gardner found that the original canvas was lifting off of the lining because the adhesive was failing. Repairing the lining could have resulted in problems caused by a patch done earlier; impressing its shape through the painting’s front, the patch created an area that would always react differently from the rest of the canvas.

Ultimately, after much discussion with colleagues, Gardner removed the lining. Although she had done this sort of procedure on other paintings in the past, she used techniques on Lady Elizabeth Crichton not employed previously to remove the glue—a challenging maneuver because the glue was so thick. 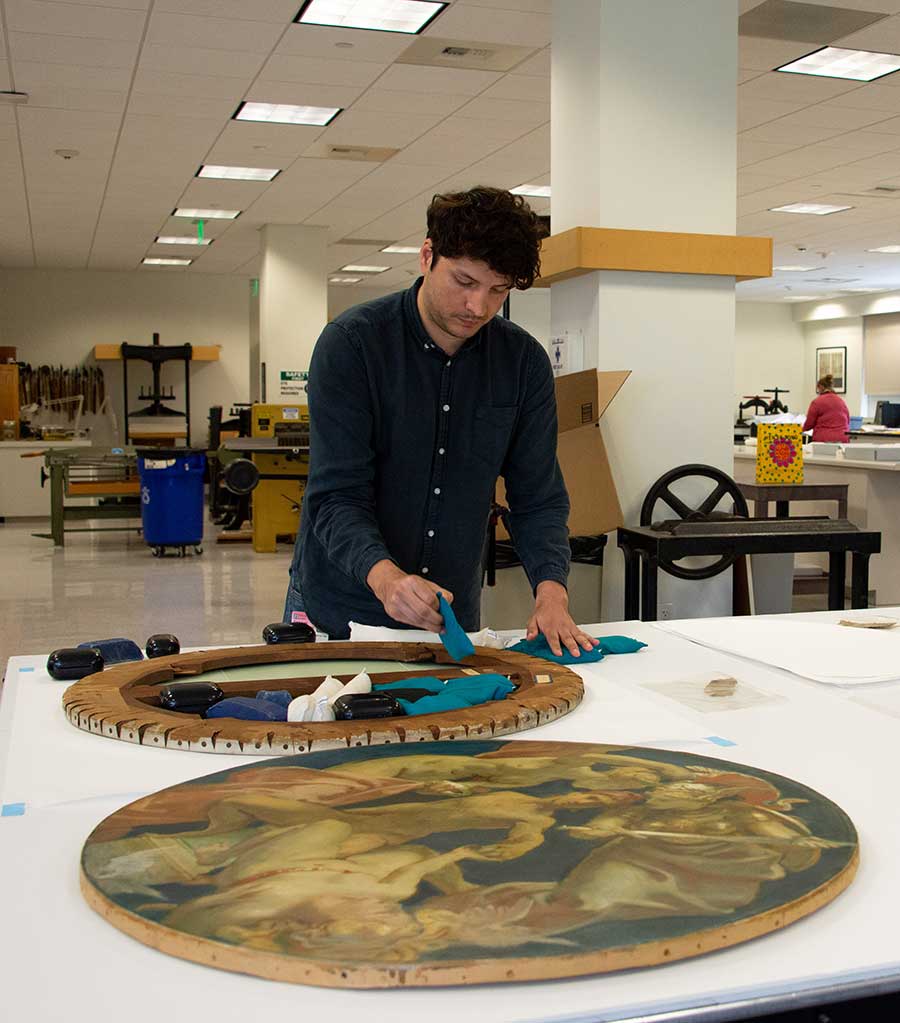 Jose Luis Lazarte, research scholar in paintings conservation at The Metropolitan Museum of Art in New York City, applies small weights to the back of an oil study, Sphinx and Chimaera (1916–1921), by John Singer Sargent, to address the canvas’s undulation issues. Photo by Deborah Miller.

Jose Luis Lazarte, research scholar in paintings conservation at The Metropolitan Museum of Art in New York City, focused on an oil study for John Singer Sargent’s murals created for the Museum of Fine Arts, Boston. Sphinx and Chimaera (1916–1921) had undulation issues that showed up clearly under raking light.

Since the canvas had never been removed from its original wooden stretcher, Lazarte chose the least invasive treatment. He likens the correction to ironing fabric. He used a combination of pressure and humidity, distributing small weights strategically to tackle areas of undulation without applying too much pressure on other areas. This process worked. No distortions are apparent when the canvas is illuminated now and viewed from different angles.

Dealing with the oil study so closely gave Lazarte new insights into Sargent’s practice and how he developed compositions over time. “This is very exciting. Everyone’s focusing on his portraits. There is not much research at a technical level on his murals,” says Lazarte. 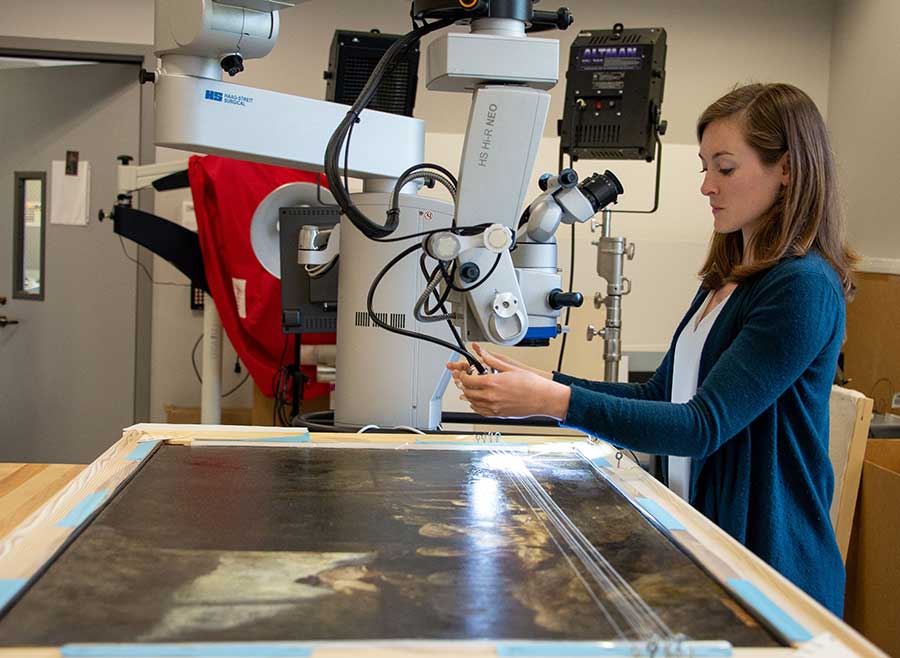 Often tears go through the lining as well as the canvas, providing access from the back to reweave the threads. In the Jacque work, the only access was from the front, and removing the lining was considered too invasive. The creative solution: a tensioning method, in combination with humidity, to gently coax open the tear, using a stretching device called a trecker.

Rayner reweaved and rejoined the threads from the front and stabilized the tear. “I had read and heard about the trecker in school, but I had never used it. It was fantastic to solve this conundrum through a step-by-step decision-making process with colleagues,” says Rayner.