What Now: Collecting for the Library in the 21st Century 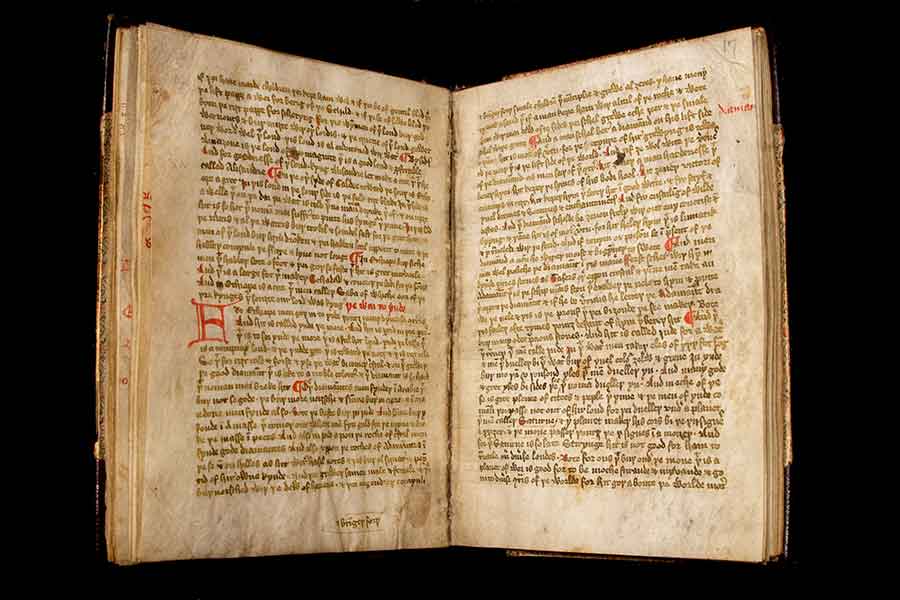 "What Now: Collecting for the Library in the 21st Century ," Part 1, in the Library's West Hall through February 17, offers what co-curator Claudia Funke calls "a tantalizing glimpse of The Huntington's diverse resources available for humanities scholarship."

"What Now," Part 1 and Part 2 (the second on view from May 2–Aug. 24, 2020) focus on some of the intriguing items collected by the Library since 2000—a period during which the Library has acquired roughly two million. How does one choose from such a wealth of material? Funke, Avery Chief Curator and Associate Director of Library Collections, and Assistant Curator of Architecture and Photography Erin Chase worked with their fellow curators, who nominated favorites from their areas of expertise. Together they resolved these into eight sections that formed four loose pairs: "Love" and "Conflict," "Numbers" and "Secrets," "Landscape" and "Migrations," and "Materiality" and "Process."

Each of the more than 50 items in Part 1, on public exhibition for the first time at The Huntington, fascinates on its own merits, and together they demonstrate the breadth and depth of the Library’s collections. Chase notes: “Many of the works are modest objects, yet they, too, tell important stories and provide the texture and diversity essential to the historical record.”

Among the oldest works on view is a 15th-century manuscript on parchment, The Book of John Mandeville, the story of an English knight traveling through the Middle East and Holy Land in the 14th century. Many centuries later, contemporary author Paul Theroux recorded his solo trip across Asia, during which he rode such trains as the Khyber Pass Local, in a spiral-bound notebook (also on view) for his nonfiction book The Great Railway Bazaar (1975). The Huntington is a major repository for the literature of travel and exploration.

Visitors to the exhibition will encounter objects related to a number of other famous authors: Hilary Mantel’s outline for her novel Fludd and an Octavia E. Butler manuscript, where Butler emphatically wrote across a sheet of typing paper: “Conflict is the life-blood of good fiction.”

One of the most arresting visuals in the exhibition is the panoramic photograph “Venice—Del Rey Oil Field,” taken in 1930 when California produced one quarter of the world’s oil supply. Relevant to those studying extractive industries and the environment, the photo is a striking example of the Library’s extensive resources regarding the American West. 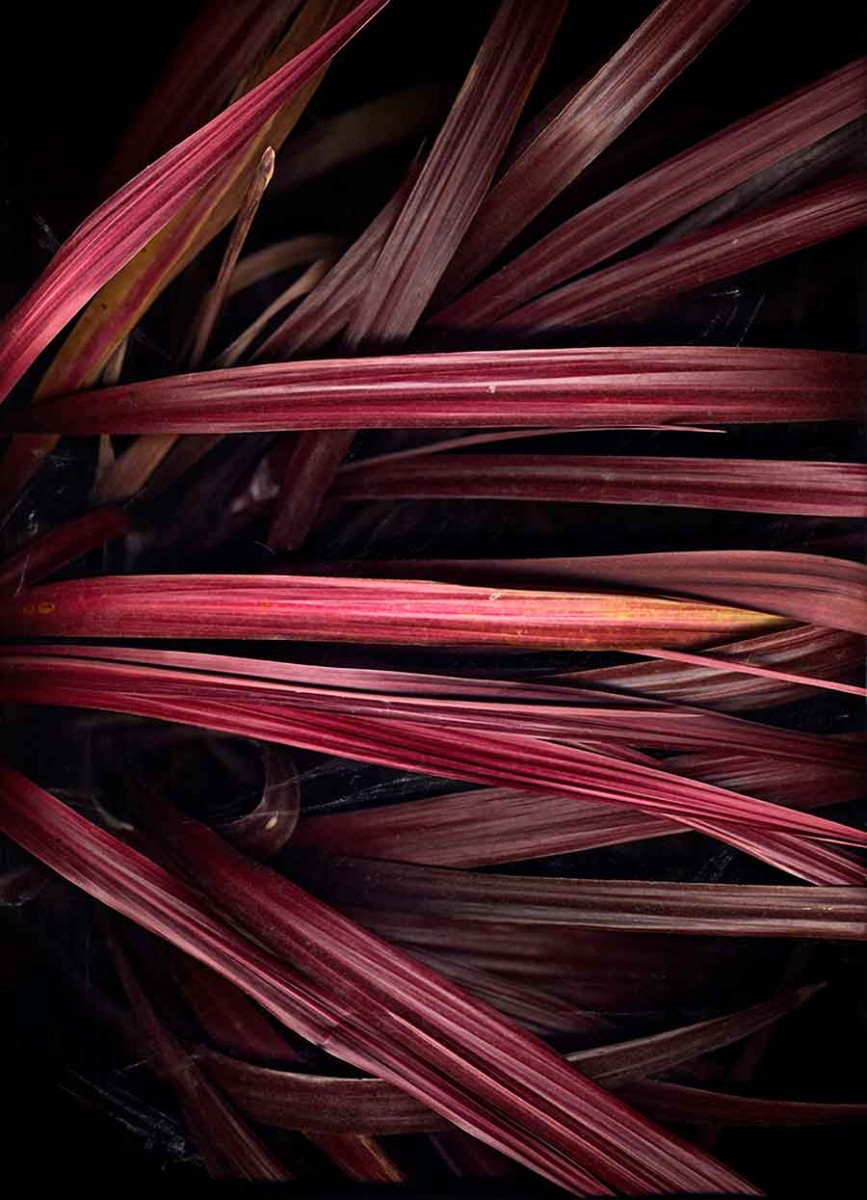 Another large image is Jane O’Neal’s archival inkjet botanical print “Cordyline” (2009). O’Neal placed plant material directly onto a scanner. The technology she employed is a long way from that of photographer Edward Weston, whose toned platinum print titled “Summer Idyll” (1916) is a rare early work acquired in 2016. The Weston print is juxtaposed with a psychedelic Wes Wilson poster advertising a 1966 rock concert at the Fillmore Auditorium in San Francisco that featured the band Jefferson Airplane.

A 1961 aerogram and photobooth pictures of Christopher Isherwood and his partner Don Bachardy from 1953 illuminate the relationship of an openly gay couple in the years before the Stonewall uprising of 1969.

Other materials in the show resonate with other anniversaries as well as contemporary events. One example is a pink sheet of paper with telephone messages for Los Angeles County Supervisor Gloria Molina in 1994 from two anonymous callers regarding Proposition 187—just 24 hours before a federal injunction forbid enforcement of the ballot initiative intended “to prevent illegal aliens in the United States from receiving benefits or public services in the State of California.” Molina opposed the proposition before and after its approval by voters on November 8, 1994. Her extensive archive amplifies The Huntington’s collections in California law and politics and Hispanic history. 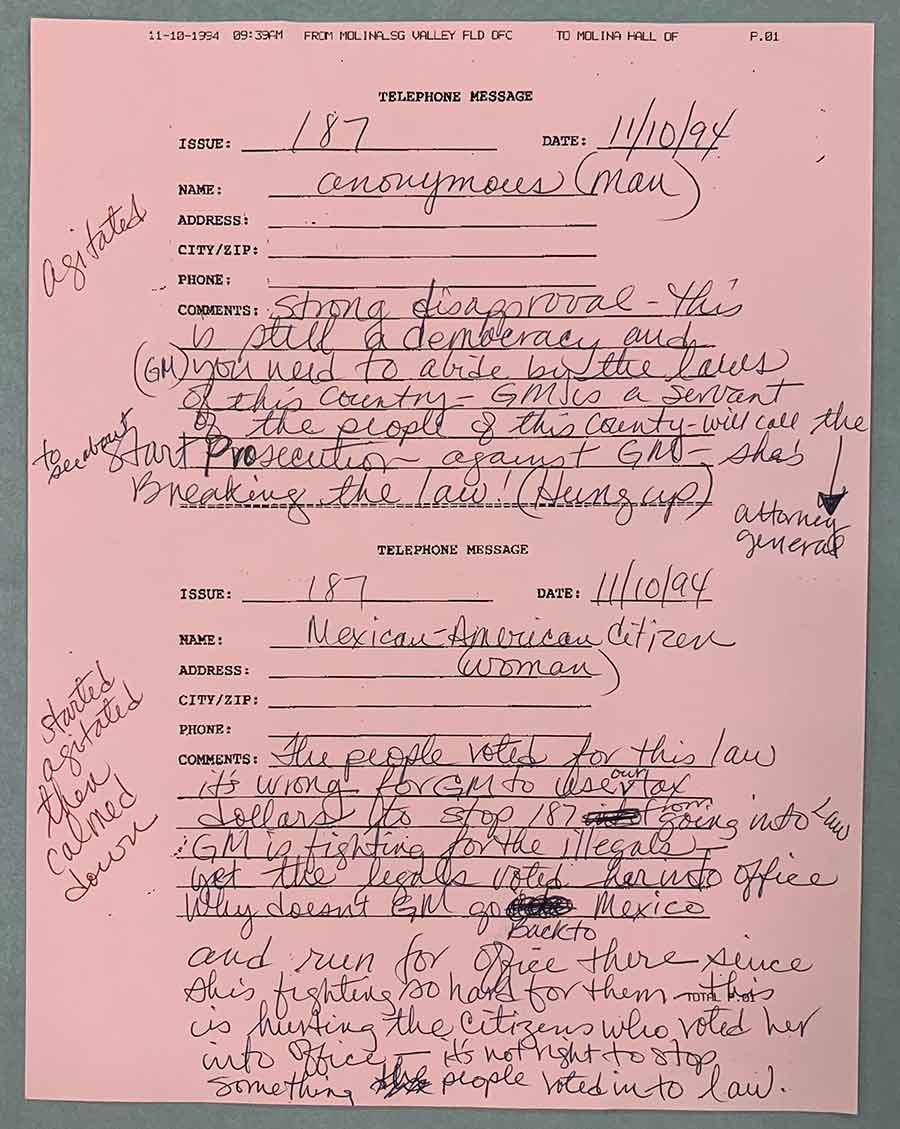 Co-curator Funke’s favorite object, if asked to pick just one, is the journal of Dolores V. Trejo, who emigrated from Mexico to the U.S. in 1935. In 1953, she wrote a letter (on view) that was published in a San Diego newspaper, praising a Captain Perkins, who was retiring from his post at the U.S. border. She thanked him for his humanitarian treatment when she herself had crossed the border. Trejo’s notebook also details her work experiences, expenses, home ownership, and Christian faith.