Why it Matters to Drew Faust 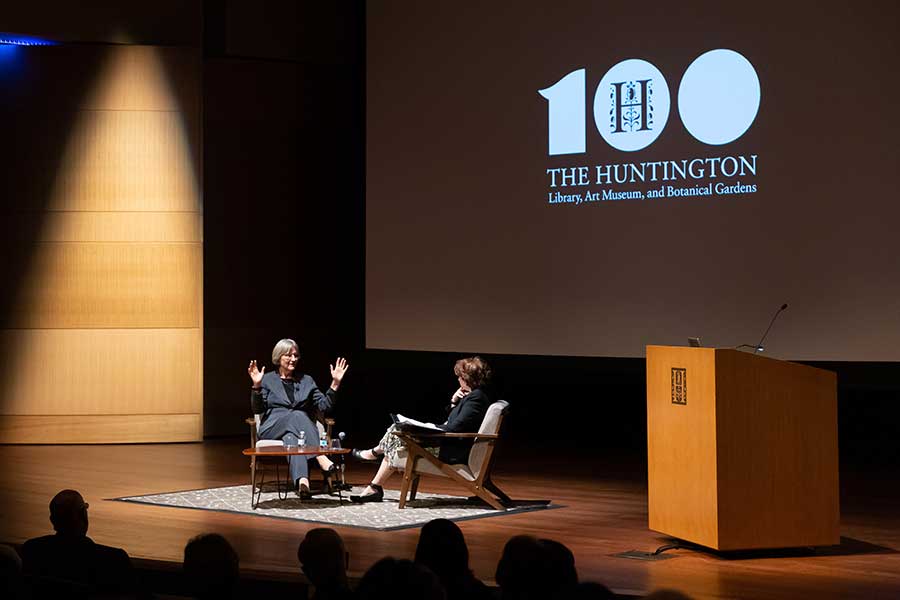 For the second event in The Huntington's Centennial Celebration series "Why It Matters," Huntington President Karen R. Lawrence welcomed Drew Gilpin Faust, Civil War historian and former president of Harvard University, to Rothenberg Hall. "Why It Matters" highlights the significance of The Huntington's library, art, and garden collections in helping to address issues of today. In their wide-ranging conversation, held on February 27—Henry E. Huntington's birthday—Lawrence and Faust focused on humanities, humanistic education, and history. Their exchanges were often punctuated with laughter and cheers from the capacity crowd.

Lawrence led off the event quoting from Faust’s statement upon receiving the John W. Kluge Prize for the Study of Humanity from the Library of Congress in 2018: “The value of humanities education is in cultivating the ability to empathize, to see the world through others’ eyes, to understand different cultures, different times, and to imagine a world that’s different from the one we live in now.” 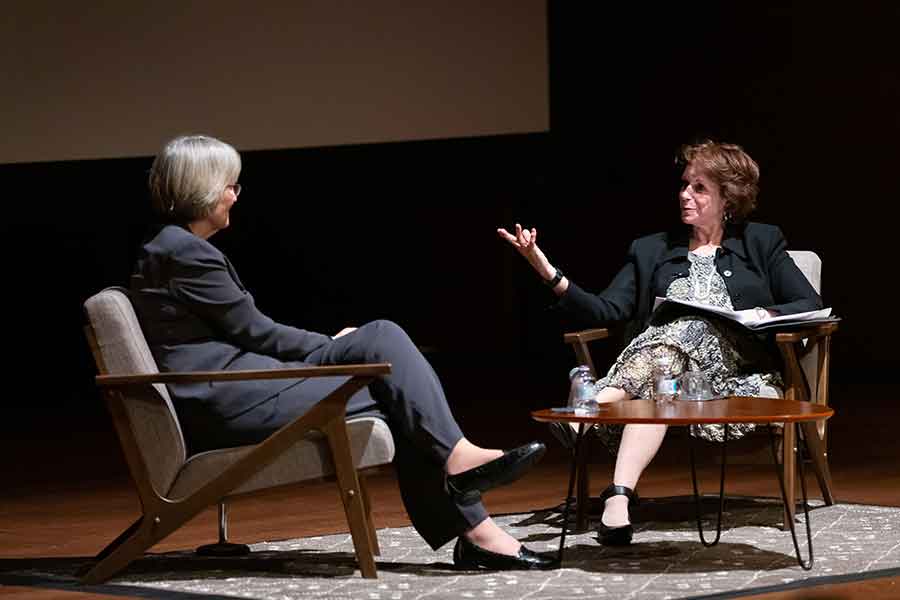 Lawrence and Faust discussed the value of an education in the humanities. Photo by Sarah M. Golonka.

Yet the humanities are not valued today as they were in the past. “I think we really are in crisis now,” Faust said. She noted that the number of students declaring history majors has dropped 50% since 2007. Faust traces the decline’s roots to the financial crisis of 2007 and the desire of young people to land jobs that pay well. She cautions students to think about their lifetime trajectory as well. “How do we prepare someone to be a citizen? Now, more than ever, we need that understanding.”

Lawrence noted that STEM fields—science, technology, engineering, and math—are often set in opposition to the humanities, but that the humanities may have a more important role in our technological age than ever before. Faust said she sees the opportunities: “Technology can tell you how to get somewhere but can’t tell you where to go.” She also believes the humanities can help us deal with unprecedented information overload—to distinguish the reliable from the unreliable, the true from the false. 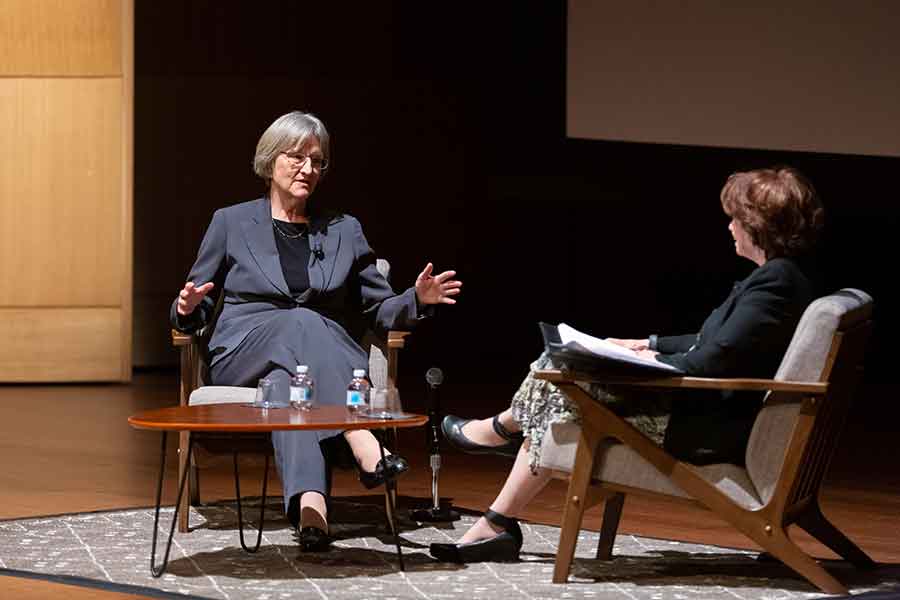 Faust spoke about the significance of original sources, such as those housed at The Huntington, and the crucial role they play in our understanding of history. Such items, she said, “connect to the past in an electric manner.” Photo by Sarah M. Golonka.

Faust became interested in history during her childhood in a rural community in Virginia during the civil rights era. She and her parents visited Civil War sites during the conflict’s 100th anniversary celebration. At the same time, she was disturbed by the segregated society around her. When she was nine, she wrote to President Eisenhower, urging him to support integration, a letter that the Eisenhower Library has in its archives, she discovered.

An award-winning author of several books on the Civil War and southern history, Faust cites fellow historians Eugene Genovese and Eric Foner, whose work captured the public’s interest in the cultural history of slavery, which had been overlooked before the civil rights era. Key to this “searing reassessment” was consulting different kinds of historical sources.

A reassessment of Harvard’s history and its links with slavery occurred during Faust’s presidency (2007–2018). For instance, what had been the president’s house in a former time was found to be a “little plantation” occupied by the president’s family and 11 enslaved people. Faust believes we should not erase the past but deal with its complexity. One result of the lack of support for historical education is that young people “have no depth of field,” the ability to understand realities in the context of their times. 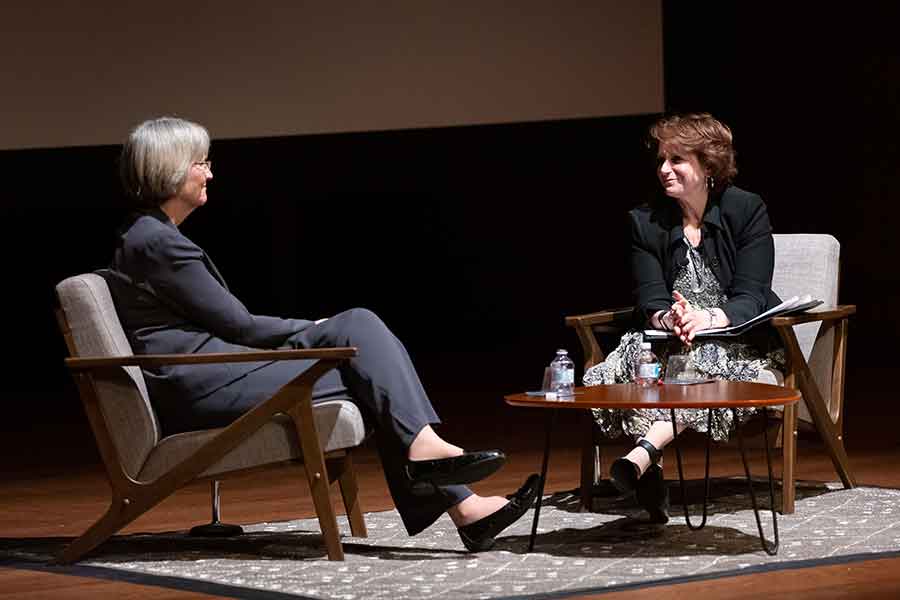 As a contributing writer to The Atlantic, Faust recently published an essay that relates to the early part of the next book she’s writing, a book different from her previous volumes, and one that she calls a “memoir history.” Photo by Sarah M. Golonka.

Original sources play a crucial role in this understanding. An astonishing number can be accessed online, but handling the actual object, said Faust, is a powerful experience. She spoke passionately about the small pocket notebooks carried by the pioneering nurse Clara Barton, founder of the American Red Cross, and the poet and volunteer nurse Walt Whitman during the Civil War; in their notebooks, they would scribble the names of the dying so that they could write to their parents. Such items “connect to the past in an electric manner.”

As the Arthur Kingsley Porter University Professor at Harvard, Faust said, she loves her return to the scholarly life of reading, reflecting, writing, and teaching. As a contributing writer to The Atlantic, she recently published an essay that relates to the early part of the next book she's writing, a book different from her previous volumes, and one that she calls a "memoir history." The title of the article is "Race, History, and Memories of a Virginia Childhood." If you read the article, you will know why it matters.