Take A Walk Among the Cycads

If you're returning to The Huntington soon, one of the places you may want to visit is the cycad walk. This new garden area has been under development for nearly five years and is now looking gorgeous. As a bonus, the cycads grace one of The Huntington's less frequented locations, so it should be an easy place to find enough room to view plants safely while maintaining social distance from other visitors.

The walk is on a hill to the south of the Huntington Art Gallery terrace. A paved, winding path makes the area suitable for all visitors, including those who use wheelchairs or walkers, and benches are plentiful. 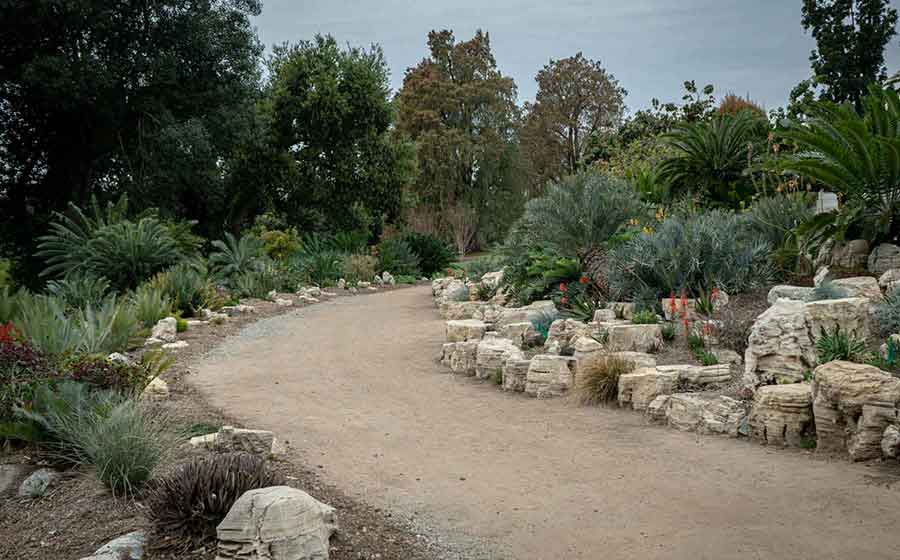 The wide path of the cycad walk is accessible to all visitors. Photo by Jessica Pettengill.

The walk highlights cycads, unusual plants that have captivated generations of collectors. Henry E. Huntington avidly collected cycad specimens more than a century ago; many of the long-lived plants are still on display outside the Huntington Art Gallery, his former mansion. The new cycad garden was made possible through a generous bequest from Loran and Eva Whitelock. Loran, who passed away in 2014, was a cycad expert and enthusiast who donated the vast cycad garden he had lovingly collected, tended, and studied for decades at his Eagle Rock home.

In 2015, roughly 1,500 cycads, some weighing as much as one ton, were carefully unearthed from Whitelock's property and moved to The Huntington. Some were placed directly in the ground by a careful team led by Shadi Shihab, The Huntington's curator of floristic gardens, and others were stored while the new cycad walk area was graded and prepared. Some were also placed in The Rose Hills Foundation Conservatory for Botanical Science.

Left: Cycads lining a brick walk in Loran Whitelock’s home garden in 2014, shortly before The Huntington acquired his cycad collection. Photo by Kate Lain. Right: Loran Whitelock and his wife, Eva, in front of their home. Photo by Jim Folsom.

The cycads generated a profusion of reproductive cones once they were replanted. While the colorful cones were eye-catching, they were also a symptom of stress. “That’s the plant’s response to a traumatic experience,” said Gary Roberson, lead project gardener for the cycad and palm collections at The Huntington. “Now they’re settling down.” Nearly all of the plants survived the move, said Roberson, who oversaw their transfer and replanting as well as the creation of the new garden area.

The new walk was the brainchild of Jim Folsom, the Marge and Sherm Telleen/Marion and Earle Jorgensen Director of the Botanical Gardens at The Huntington. Folsom had walked the area that became the cycad walk with Whitelock. Folsom’s goal was to make a garden that recreated the magic and awe of Whitelock’s hillside collection. “It’s not a duplication of Loran’s garden, it’s a representation,” Roberson said. “You get the same feel.” 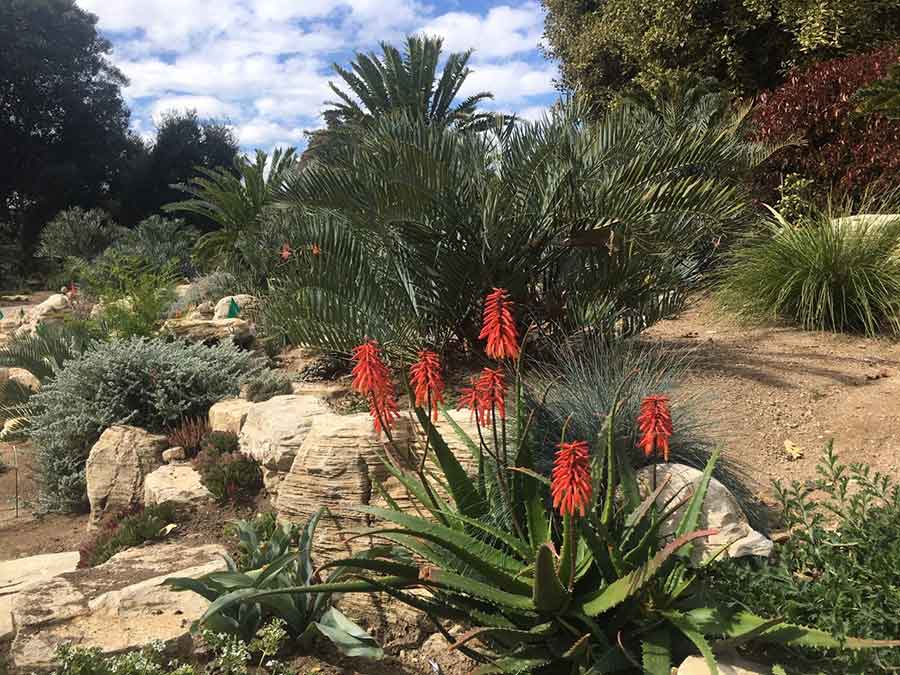 Over the past five years, Folsom, Roberson and a team of Huntington gardeners and workers have created new paths, built the concrete retaining walls and stairs, and added some 220 tons of Palos Verdes limestone that was similar to rock Whitelock had used in his garden. (The stone is not from the Chinese Garden, as many visitors think, but was purchased locally, Roberson said.)

Once the hardscaping and cycads were in place, the final touch was to add in hundreds of companion plants that Whitelock had also collected and displayed. These can be found throughout the garden—from gigantic staghorn ferns, growing on tree trunks above the walk, to dainty euphorbias, begonias, succulents, and bulbs that add colorful flowers throughout the year.

Whitelock was known for collecting unusual plants, Roberson said. He had an eye for plants with unusual colors and patterns. “Loran was into the oddball plants,” Roberson said. 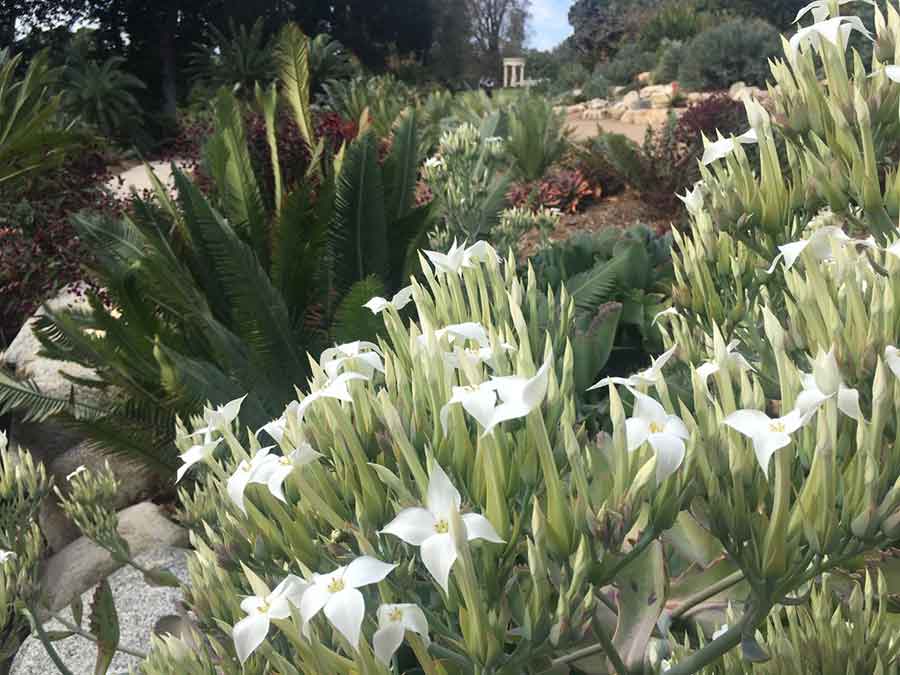 The cycad walk replicates Whitelock’s original garden, which featured hundreds of companion plants, such as this Kalanchoe marmorata in front of a Dioon. Photo by Usha Lee McFarling.

Roberson has tucked many of these beautiful oddballs between the cycads, creating a game of botanical hide and seek. “You see people sometimes rushing through the gardens. My goal is to make them stop and look,” he said.

Now that the cycads have had time to settle in, Roberson said, they’re quite healthy and happy. Many put out a new flush of leaves this spring, a sign that they are thriving and ready to be admired.

“This is a collection, just like paintings or sculptures,” Roberson said. “It’s a collection that happens to be alive.”

You can read more about cycads in the Spring/Summer 2017 issue of Huntington Frontiers.