Solidarity with the Mount Wilson Observatory 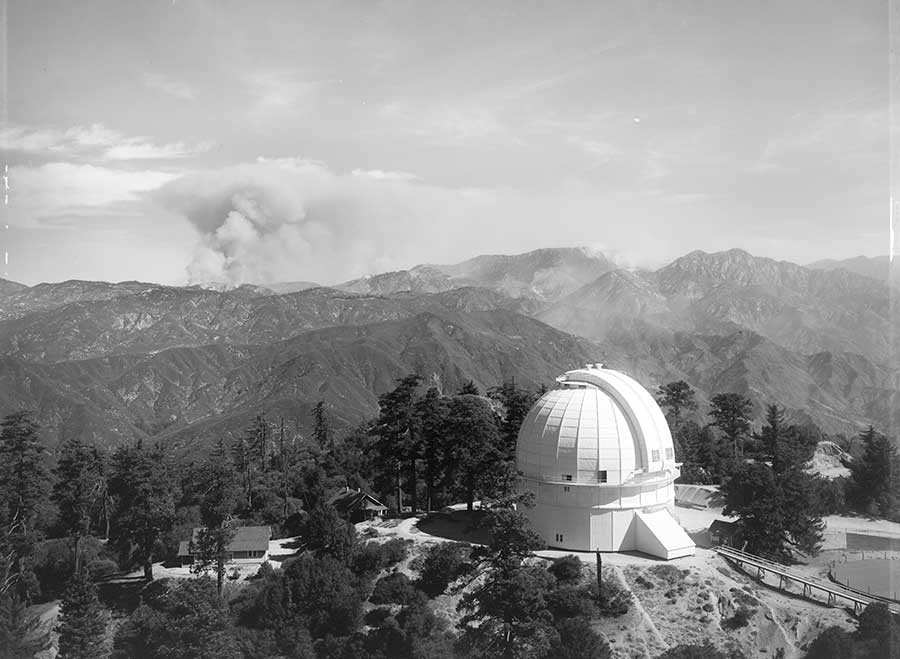 Forest fire in the west fork of the San Gabriel River, as seen from Mount Wilson Observatory, Sept. 29, 1924, around 10:20 a.m. Unknown photographer. The dome of the 100-inch Hooker Telescope is in the foreground. Image courtesy of the Observatories of the Carnegie Institution for Science Collection at the Huntington Library.

In 1904, more than a half-century before the creation of NASA, George Ellery Hale (1868–1938), a solar astronomer and astrophysicist, founded the Mount Wilson Observatory with funding provided by the Carnegie Institution of Science. Hale also spent substantial time and effort in later years convincing Henry E. Huntington to create his own research and learning institution for the public welfare, and he served as one of The Huntington’s first trustees.

Perched on a ridge 5,715 feet above Pasadena, where steady air provides crystalline views of the stars on clear nights, the gleaming domes housing the Mount Wilson Observatory’s 60-inch telescope (1908) and 100-inch Hooker Telescope (1917)—the world’s largest astronomical instruments of their times—served as the vanguard to the nation’s space exploration program. 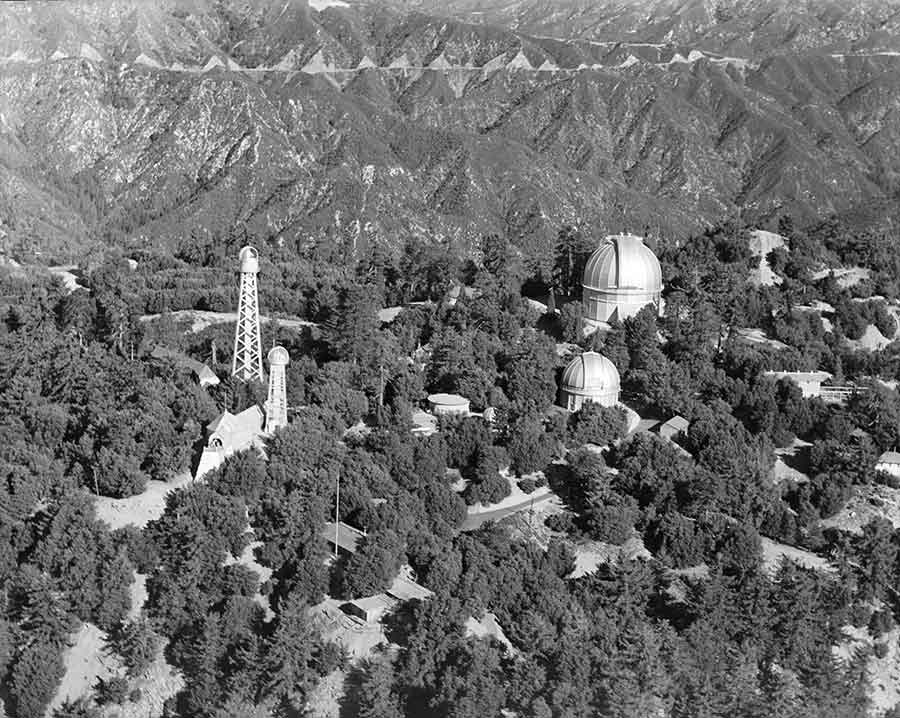 Aerial view of Mount Wilson Observatory, March 1958. Unknown photographer. Image courtesy of the Observatories of the Carnegie Institution for Science Collection at the Huntington Library.

In the 1920s, astronomer Edwin Hubble (1889–1953), whose papers are at The Huntington and who also served as a Huntington trustee, used the Hooker Telescope to determine that the Andromeda “spiral nebula,” as it was called at the time, was not part of the Milky Way but rather a distant galaxy. In collaboration with fellow astronomer Milton Humason (1891–1972), Hubble later confirmed that an entire universe of galaxies was speeding away from us in all directions, a fundamental discovery that gave rise to the Big Bang theory of the universe’s origin. 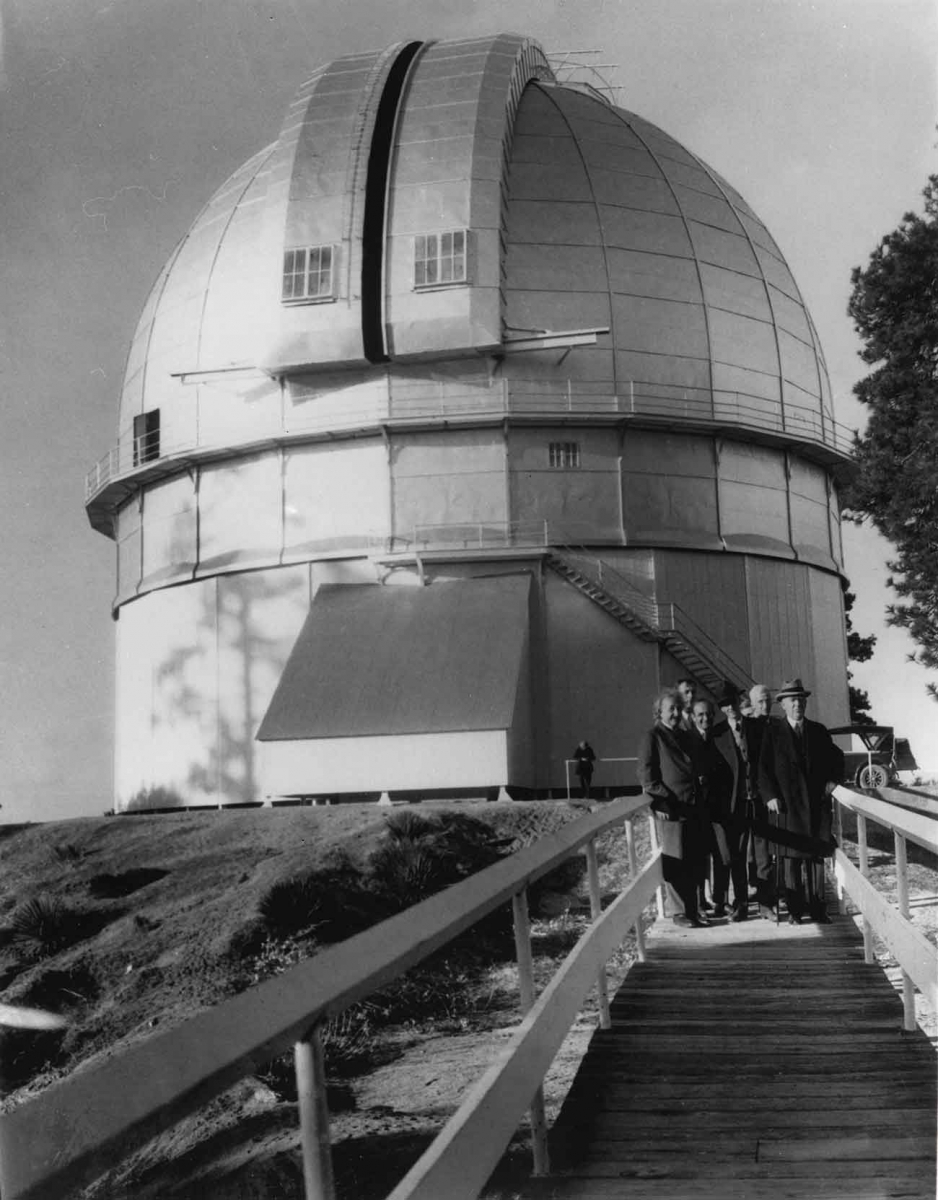 Edwin Powell Hubble, Albert Einstein and others standing in front of the Mount Wilson Observatory, Jan. 29, 1931. Unknown photographer. From left to right: Albert Einstein, Edwin Hubble, Walther Mayer, Walter S. Adams, Arthur S. King, and William W. Campbell. The 100-inch Hooker Telescope dome is in the background. Image courtesy of the Observatories of the Carnegie Institution for Science Collection at the Huntington Library.

This site of profound historical importance, whose history is so deeply intertwined with The Huntington’s, recently escaped a close encounter with the Bobcat Fire, which ignited on Sept. 6 and raged to within a few hundred feet of the telescope domes on Sept. 15. Heroic and strategic efforts by firefighters spared the observatory. On Sept. 18, Sam Hale, grandson of George Ellery Hale and chairman of the Mount Wilson Institute Board of Trustees, announced that “the firefighters on Mount Wilson declared us safe, and it remains so as the Bobcat Fire burns around our perimeter.” Firefighters are still battling flames today. 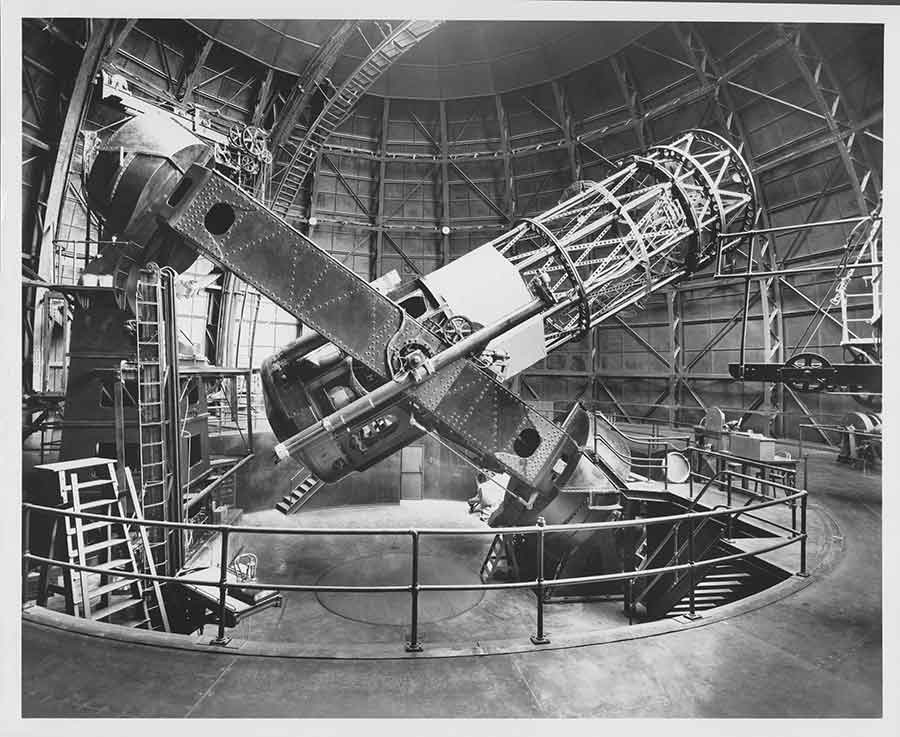 Edison Hoge, Hooker 100-inch reflecting telescope, ca. 1940. Side view with tube 40 degrees from horizontal. The chair of astronomer Edwin Hubble (1889–1953), on an elevating platform, is visible at left. Image courtesy of the Observatories of the Carnegie Institution for Science Collection at the Huntington Library.

This is not the first time that fire has threatened the Mount Wilson Observatory. Recent fires in 2009 and 2017 burned fuel near the grounds, which may be providing some measure of protection this time around. The fire in 2017 occurred shortly before The Huntington hosted an academic conference to celebrate the 100-year anniversary of the first use of the Hooker Telescope, “First Light: The Astronomy Century in California, 1917–2017.” (You can listen to the conference presentations on SoundCloud.) Conference participants could step outside Rothenberg Hall during breaks and gaze up at Mount Wilson, relieved to know that the observatory was still there. 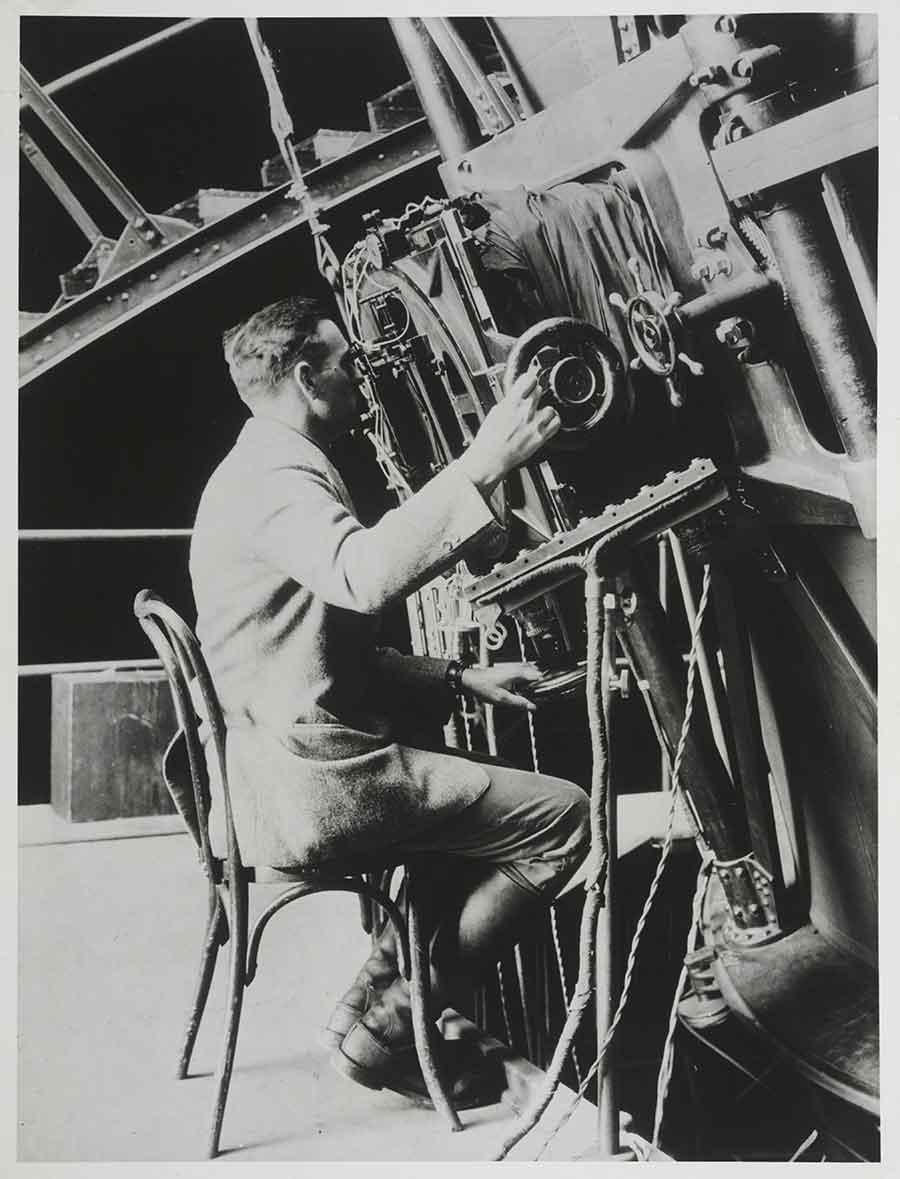 Fast forward to 2020, when despite a global pandemic and local wildfires, The Huntington and Mount Wilson Observatory continue to stand in solidarity. When the expansion of The Huntington’s Chinese Garden is opened to the public on Friday, Oct. 9, visitors will be treated to 11.5 new acres of landscape, pavilions, and other features in Liu Fang Yuan 流芳園, the Garden of Flowing Fragrance—and one of those new features will be the Stargazing Tower 望星樓. Situated on the highest point in the garden at the southern end of the lake, this pavilion provides views of the landscape, the distant mountains, and, at night, the stars. The name pays homage to the Mount Wilson Observatory, visible from the tower, and to the work of astronomer Edwin Hubble. 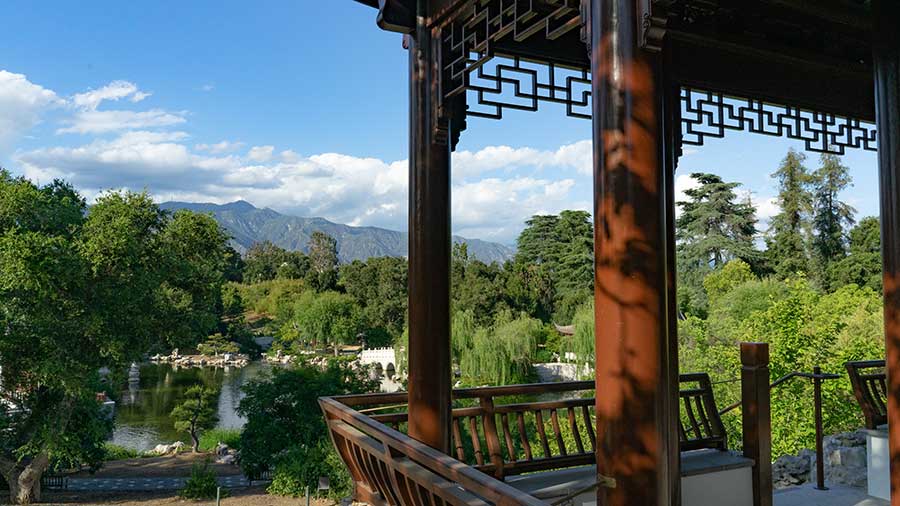 Aric Allen, View from the Stargazing Tower 望星樓, 2020. The Stargazing Tower is one of the new pavilions in the expanded section of the Chinese Garden, Liu Fang Yuan 流芳園, the Garden of Flowing Fragrance. The tower offers sweeping views of the lake and garden below and of the “borrowed landscape” beyond, including the San Gabriel Mountains and Mount Wilson Observatory, which inspired the pavilion's name. The Huntington Library, Art Museum, and Botanical Gardens.

You can learn more about Edwin Hubble’s work during a free online Carnegie Lecture, “Hubble’s Troublesome Constant,” from 4-5 p.m. on Monday, Oct. 5. Register for the lecture here.