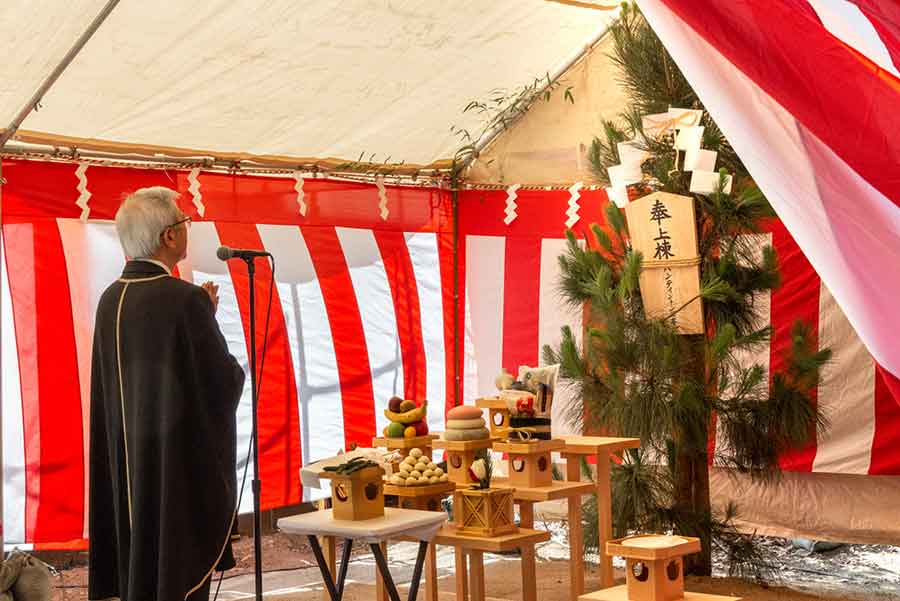 Sensei Eugene Imai of Shumei America recites a ritual prayer asking the spirits to bless and protect the Magistrate’s House, built in Japan in 1695 and now being reconstructed at The Huntington. On the altar before him are symbolic offerings of fruit, rice cakes, pine boughs, and other gifts. The Huntington Library, Art Museum, and Botanical Gardens. Photo by John Diefenbach.

Offerings of fruit, rice cakes, fish, and wine; humble gifts of pine sprigs; scatterings of salt; rhythmic chants; and a taiko drum’s deep resonant tones soaring skyward to invoke the spirits. These were some of the sights and sounds of the jotoshiki, a Shinto roof-raising ceremony held at The Huntington on May 19. The purpose of the ceremony was to bless the reconstruction of a 320-year-old house from Marugame, Japan, that was donated to The Huntington in 2016 by Yohko and Akira Yokoi and is being rebuilt in the Japanese Garden. A jotoshiki is typically held when the basic framework of a structure has been constructed and the ridgepole of the roof is raised. (A similar ceremony was held in Japan in 2019, before the house was disassembled in preparation for its relocation to The Huntington.) 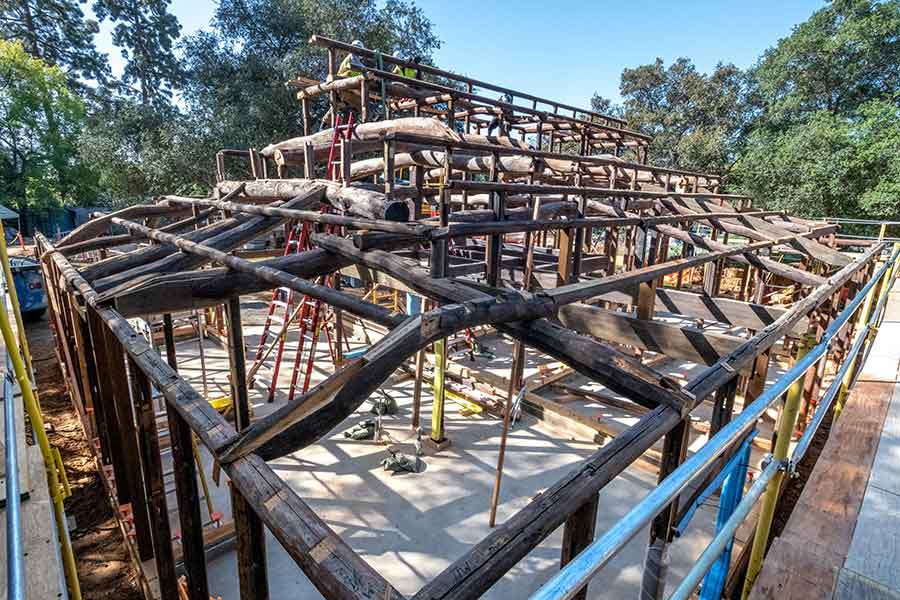 The house is being rebuilt with the original materials using traditional Japanese post-and-beam construction. The Huntington Library, Art Museum, and Botanical Gardens. Photo by John Diefenbach.

The traditional Shinto ceremony was performed by members of Shumei America, a faith-based group that promotes living in harmony with nature. Symbolic offerings were placed on an altar as humble gifts to the spirits. Salt was scattered around the framework of the house in ritual purification. Pieces of pine bough, symbolizing the regeneration of nature, were placed on the altar. And an ancient chant called the Amatsunorito, or Heavenly Prayer, invoked divine blessings. Ritualized handclaps, in sets of three, honored the three realms: the spiritual world, ancestors, and earthly existence.

“Through these offerings, we hope to fill the house with good spirits so it can serve the community for generations to come,” explained Robert Hori, gardens cultural curator at The Huntington. 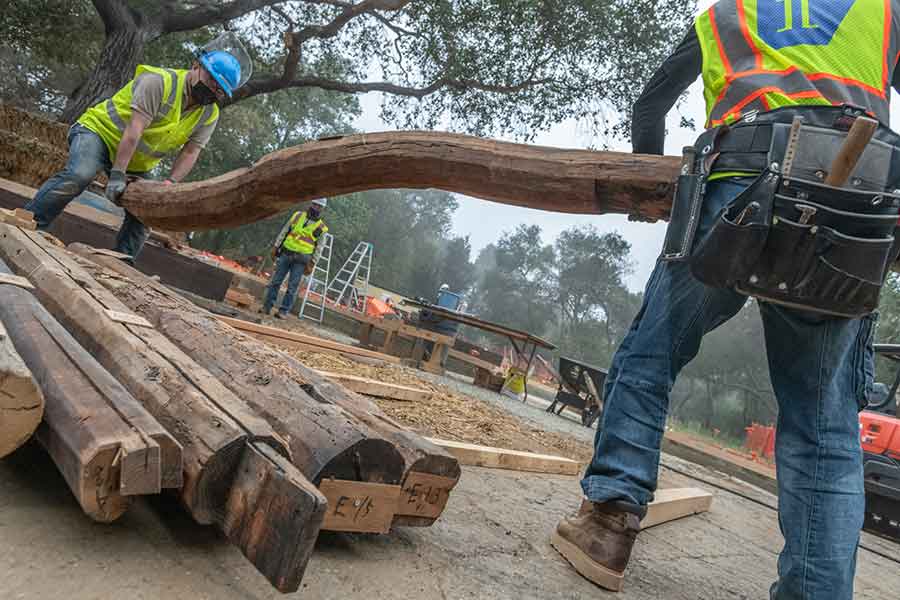 Artisans from Japan have joined the construction team, working alongside the American contractors. Pictured here, two wood craftsmen move one of the original notched roof beams in preparation for installation. The Huntington Library, Art Museum, and Botanical Gardens. Photo by John Diefenbach.

Nicole Cavender, who recently joined The Huntington's staff as the new Telleen/Jorgensen Director of the Botanical Gardens, was also in attendance, making her first public appearance. “This event honors not just the spirits but the entire community—including the community of plants and nature,” said Cavender. “And it presents us with an opportunity to reflect on the past to create a better future.” 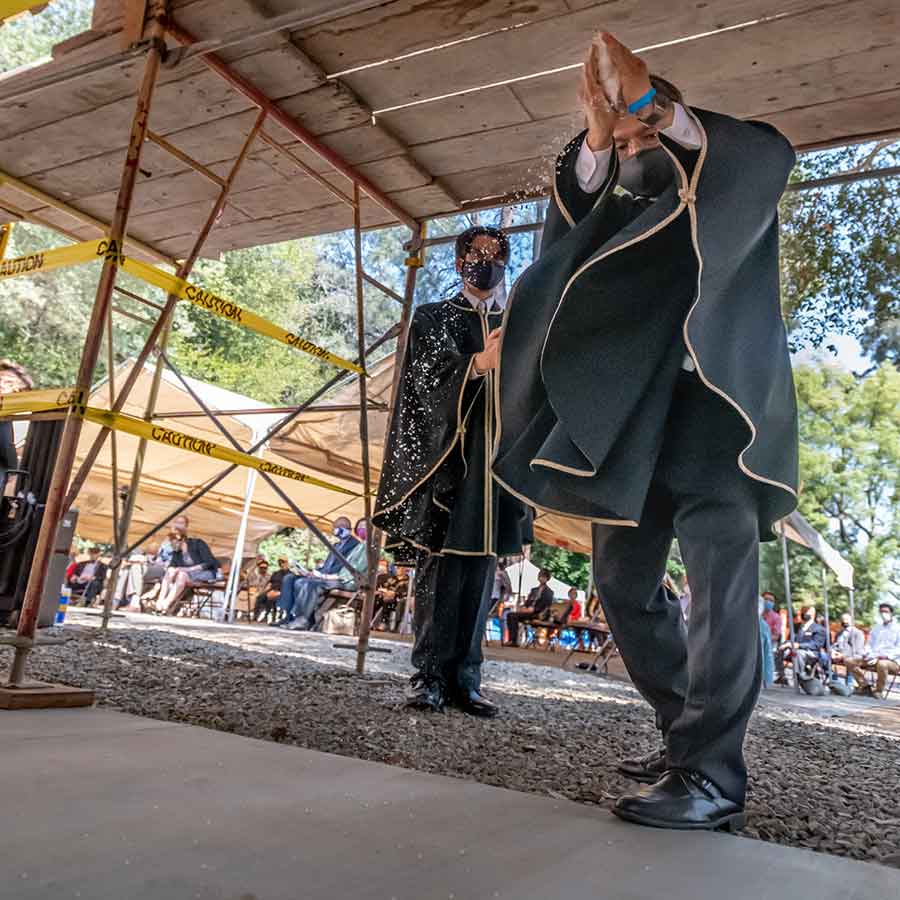 During the roof-raising ceremony, Koji Nakamura and Atsushi Fujimaki of Shumei America sprinkled salt at the entrance of the house in ritual purification. The Huntington Library, Art Museum, and Botanical Gardens. Photo by John Diefenbach

The Magistrate’s House—with its authentic 17th-century details, original fittings, and fascinating history as a center of village life during the samurai era—will join the iconic Japanese Garden and the newly expanded Chinese Garden as one of the focal points of The Huntington’s educational outreach programs, helping to promote a deeper understanding and appreciation of Asian culture. The site where it is being reconstructed is situated behind and to the north of the garden’s existing 19th-century-style Japanese House, a familiar feature to Huntington visitors. 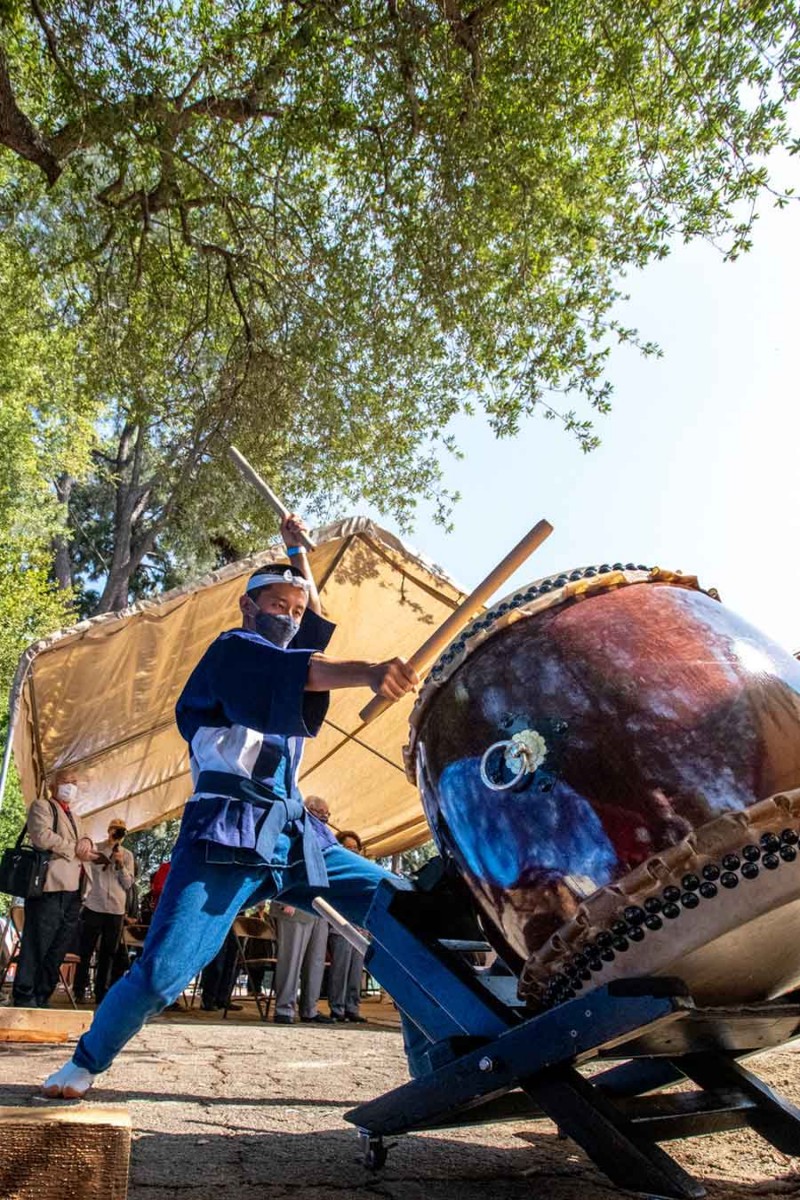 The strong, resonant tones of a taiko drum invoke the spirits and express thanks for their blessings. The Huntington Library, Art Museum, and Botanical Gardens. Photo by John Diefenbach.

Huntington President Karen Lawrence, in her comments during the celebration, touched on the significance of the house in the context of The Huntington and its collections. “This historical home will be a unique example of traditional post-and-beam wooden construction and an invaluable primary resource for students, architects, and scholars. The Arts and Crafts movement was deeply influenced by the art and architecture of Japan, and this building will serve as a wonderful point of connection with other examples of post-and-beam construction in the Chinese Garden and in the American art gallery’s Greene and Greene room. The project will also focus on permaculture and sustainable living in harmony with nature—elements of a philosophy deeply embedded in Japanese culture and from which all of us have a great deal to learn.” 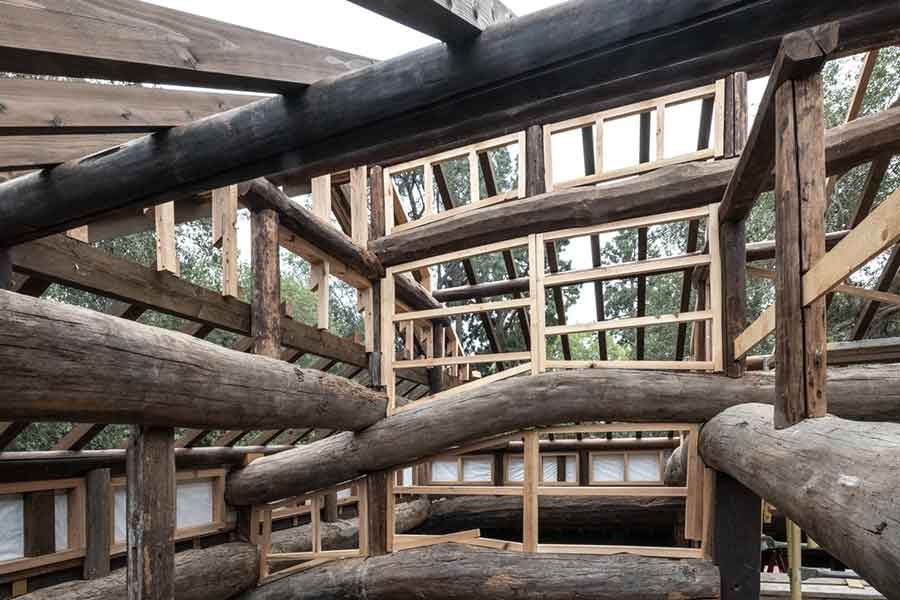 The original roof beams are shown in the reconstructed framework of the house. (Some new framing has been added where use of the original wood was not feasible.) The Huntington Library, Art Museum, and Botanical Gardens. Photo by John Diefenbach.

To say “it takes a village” to rebuild a centuries-old house is not an overstatement. Many individuals have played essential roles in the project—from Botanical Director Emeritus James Folsom, who first proposed the idea of bringing the Magistrate’s House to San Marino and worked tirelessly to make it happen; to the donors who have helped to fund it; and to the Japanese and American teams of architects and craftspeople who are painstakingly rebuilding it. Don Conlan, a member of The Huntington’s Board of Governors and one of the principal supporters of the project, noted that it has taken “faith, determination, grit, and a lot of money” over the course of nearly a decade to get to this stage. Citing the construction delays in 2020 caused by COVID-19, Conlan offered thanks “to everyone who kept the faith during the dark days of the pandemic.” 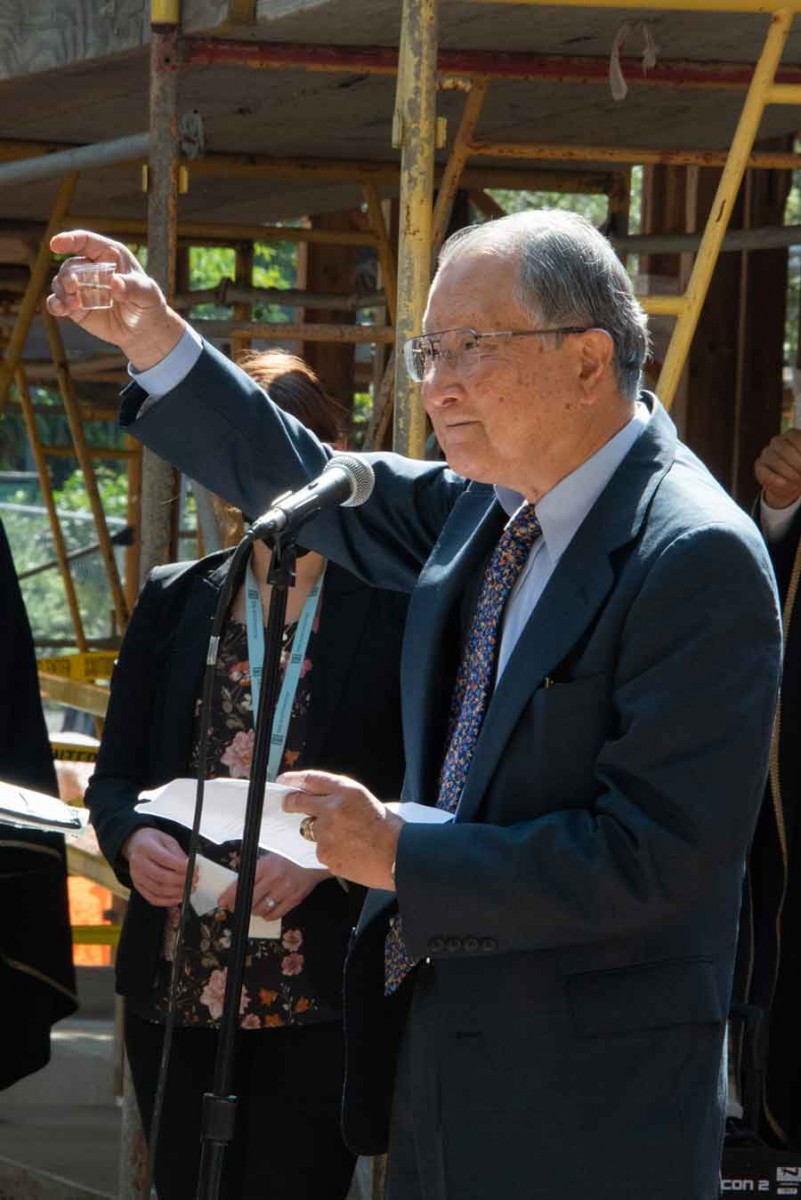 Akira Yokoi, the 19th generation descendent of the Yokoi family and the donor of the Magistrate’s House—his family’s ancestral home—lifts a glass of sake as a toast to the success of the reconstruction project. The Huntington Library, Art Museum, and Botanical Gardens. Photo by John Diefenbach.

Akira Yokoi is the 19th-generation descendent of the Yokoi family, and preserving a part of his heritage has been a motivating factor in his decision to donate his family’s ancestral home to The Huntington. He knows that the house will be preserved, cared for, studied, and experienced first-hand by people with an interest in the history and culture of Japan. Visitors will have the opportunity to walk through the structure, enter rooms, handle objects, take a seat on the tatami mats, and view the garden outside through windows that literally reflect the past. 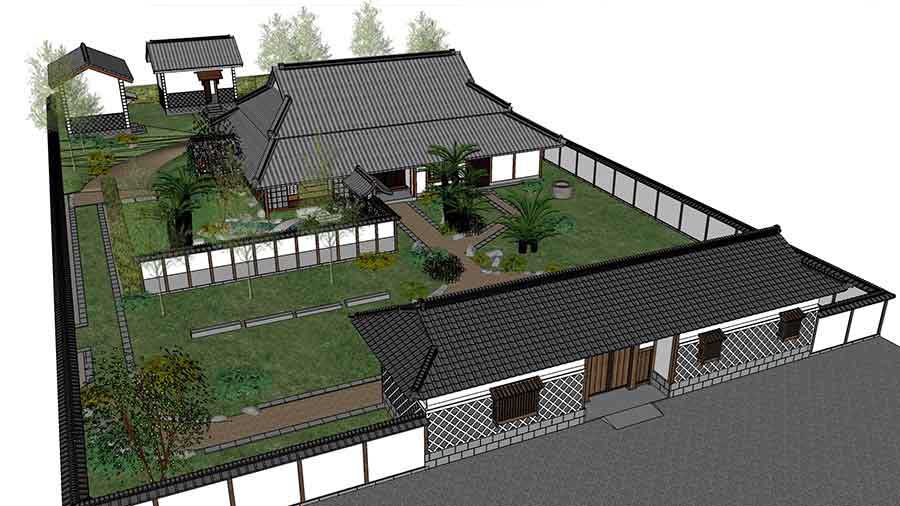 Artist’s rendering of the reconstruction, with the original shoya residence in the center, two kura storehouses at the rear, and re-creations of the gatehouse and interior garden. The anticipated public opening date is Fall 2022. Image courtesy of GPM Design Studio.

Towards the end of the jotoshiki event, small glasses of sake were passed to all those in attendance, and Yokoi offered a heartfelt toast. He also thanked key project leaders—in particular, Conlan, Hori, and Huntington board member Toshie Mosher—saying, “Without your extensive research, everlasting and enthusiastic interest, and considerate and helpful advice, this project would not have been possible.”

Yokoi then invited those in attendance to write their names on a wooden plaque that would be affixed to the rafters of the house—a time-honored tradition in Japan that has been passed down through the centuries. The plaque was subsequently installed at the highest point in the roof; next to it was hung a photo of an age-worn plaque dating from the house’s construction in 1695, inscribed with the original builders’ names. 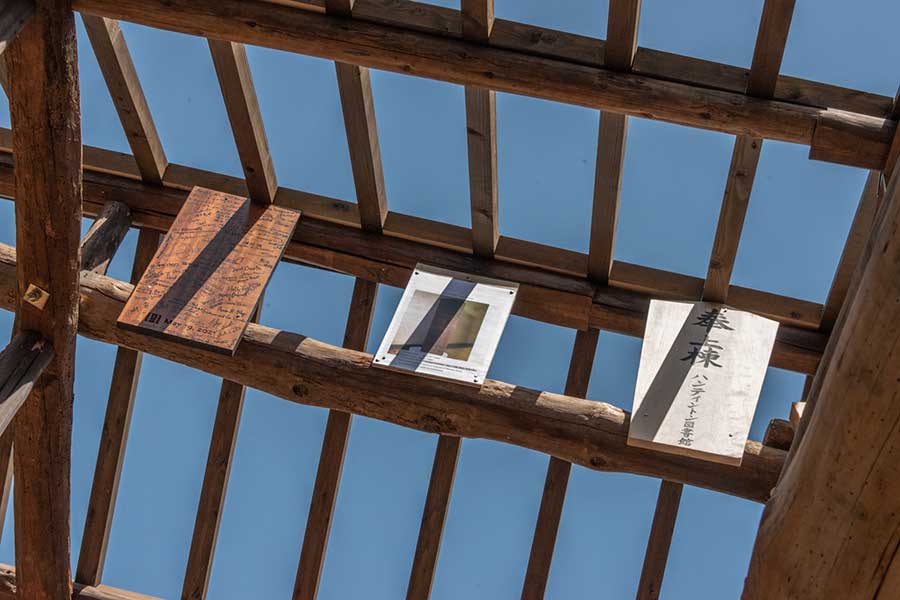 A plaque signed by participants in the jotoshiki ceremony, including Japanese and American construction crews and donors to the project, was installed on the highest point in the rafters. Alongside it is a photograph of a similar plaque that was installed in the house by the original builders in 1695. The Huntington Library, Art Museum, and Botanical Gardens. Photo by John Diefenbach.

While the roof-raising is a key milestone in the story of the Magistrate’s House, it does not mark the end of construction. In the year ahead, work will continue on the various structures that comprise the house: the original shoya residence, two kura storehouses, and recreations of the gatehouse and interior garden.

Lisa Blackburn is senior editor and special projects manager in the Office of Communications and Marketing at The Huntington.