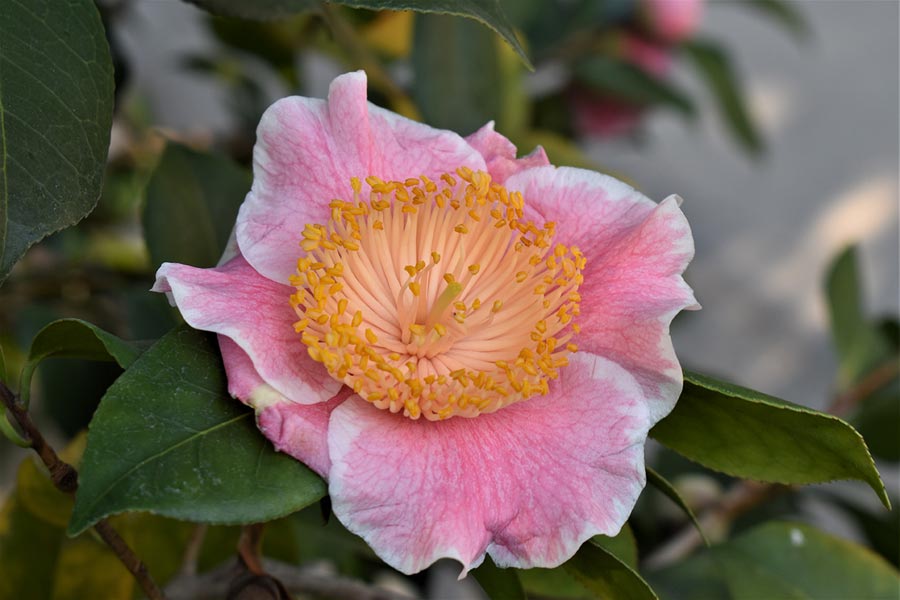 Higo camellias originated in the Kumamoto prefecture of Japan’s southernmost main island, Kyushu. Many of these cultivars are included in The Huntington’s camellia collection. Photo by Bradford King / American Camellia Society.

Last year, Robert Hori, the gardens cultural curator and program director at The Huntington, was invited to serve as guest curator for an exhibition at the Portland Japanese Garden, one of the host venues of the American Public Gardens Association’s “CommUNITY of Gardens: 2022 Annual Conference,” to be held June 20–24 in Portland, Oregon.

The collaborative result is “Gifts from Japan: A Horticultural Tale Told through Botanical Art,” an exhibition that focuses on the intersection of garden arts, horticulture, and botany through a selection of botanical illustrations from The Huntington, the Botanical Artists Guild of Southern California, and invited botanical artists from Japan. The exhibition is on view in the Portland Japanese Garden’s Calvin and Mayho Tanabe Gallery and Pavilion Gallery through July 4.

We invited Hori to share the intellectual framework for the exhibition and some highlights from the work on display. 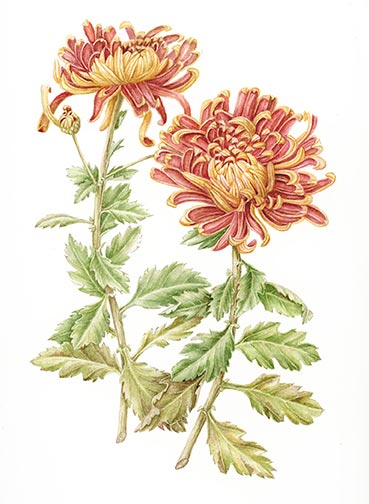 Joan Keesey (b. 1937), Chrysanthemum morifolium. Watercolor on paper, 12 x 9 in. © 2019 Joan Keesey. Image courtesy of the artist and the Botanical Artists Guild of Southern California.

In November 2021, I started discussing with Aki Nakanishi—the Arlene Schnitzer Curator of Culture, Art, and Education—the most important thing we wanted to impart through this exhibition, and we agreed it should be Japan’s enormous impact on gardens around the world. Many common ornamental plants in the United States—such as hydrangeas, irises, and camellias—were originally exported from Japan. Thus, the title of the exhibition, which illuminates the unique origin stories of many flowers that are now widely presumed native to the United States.

We also decided to arrange the exhibition into four sections: “Flora Japonica,” “A Culture of Flowers,” “Japan and the World,” and “Gifts from Japan.” 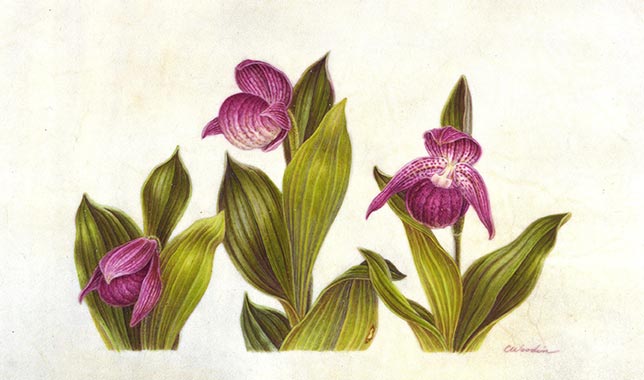 Carol Woodin (b. 1956), Cypripedium macranthos. Watercolor on paper, 7 x 11½ in. © 2007 Carol Woodin. Image courtesy of the artist and the Botanical Artists Guild of Southern California.

In the first part of the exhibition, “Flora Japonica,” we note that botanists estimate 6,000 plants are native to the Japanese archipelago. With four distinct seasons and a mountainous topography, the islands’ rich and varied flora are supported by climatic zones that range from subarctic to subtropical. Featured in this section are beautifully rendered portraits of significant Japanese native plants that are now common in western gardens. These original paintings and drawings were created by leading botanical artists based in Japan and the United States. The Huntington has enjoyed a long-standing relationship with the Botanical Artists Guild of Southern California, which put out a call for entries that resulted in the selections. What distinguishes the compositions is their attention to detail, close observation of nature, and botanical accuracy, making them true collaborations of art and science. 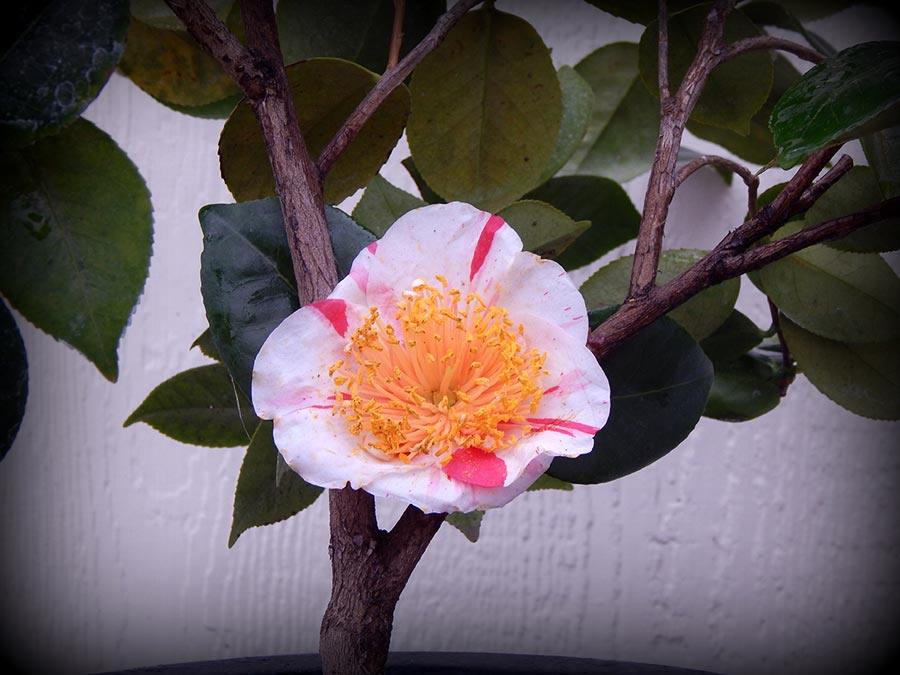 Over the thousand or so years that humans have been selectively breeding camellias, thousands of cultivars have been developed. Photo by Bradford King / American Camellia Society.

The second section of the exhibition, “A Culture of Flowers,” focuses on the close relationship between Japan’s flora and popular culture during the Edo period (1603–1868). Curated by Sei Ogasawara, who served as an adviser during the 2010 planning phase of the Seifu-an teahouse in The Huntington’s Japanese Garden, this portion of the exhibition features items from Ogasawara’s family library, which includes more than 10,000 items relating to Japan’s horticultural history. Among them is a hand-painted album that records the Shogun Garden in Edo, present-day Tokyo. It shows that daimyos, or feudal lords, throughout Japan sent plants from their own regions to be included in the Shogun Garden. From the album we learn that roughly 300 varieties of camellias were cultivated in 17th-century Japan. In our gardens at The Huntington, we have a variety of camellia called Higo that originated in the south of Japan, so we know that our camellias have a history of hybridization that goes back several hundred years in Japan. 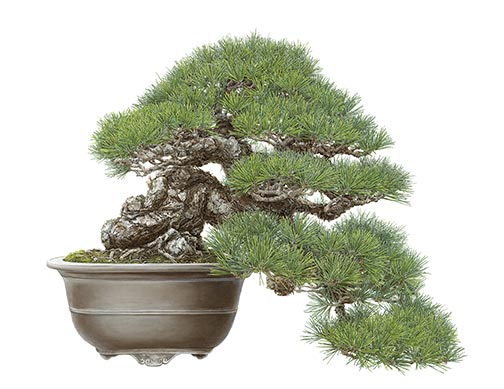 The third part of the exhibition is called “Japan and the World.” It takes a close look at World’s Fairs and their role in introducing Japanese gardens, bonsai, and many ornamental plants to the United States. These international expositions were the global marketplace of their day, where most countries displayed their latest innovations in science and industry. In contrast, Japan showcased its ancient cultural heritage. The historic Yokohama Nursery was a major exhibitor and exporter of plants, including the 3,000 flowering cherry trees that were sent to Washington, D.C., in 1912. The Huntington celebrated the centennial of this gift by distributing to local public gardens 3,000 ‘Pink Cloud’ cherry trees that were hybridized in our gardens. Among our rare books collection at The Huntington are Yokohama Nursery materials, including albums of hand-colored plates of iris, magnolia, bamboo, and camellia that were issued as illustrations in Yokohama Nursery catalogs, which are part of this section of the exhibition. 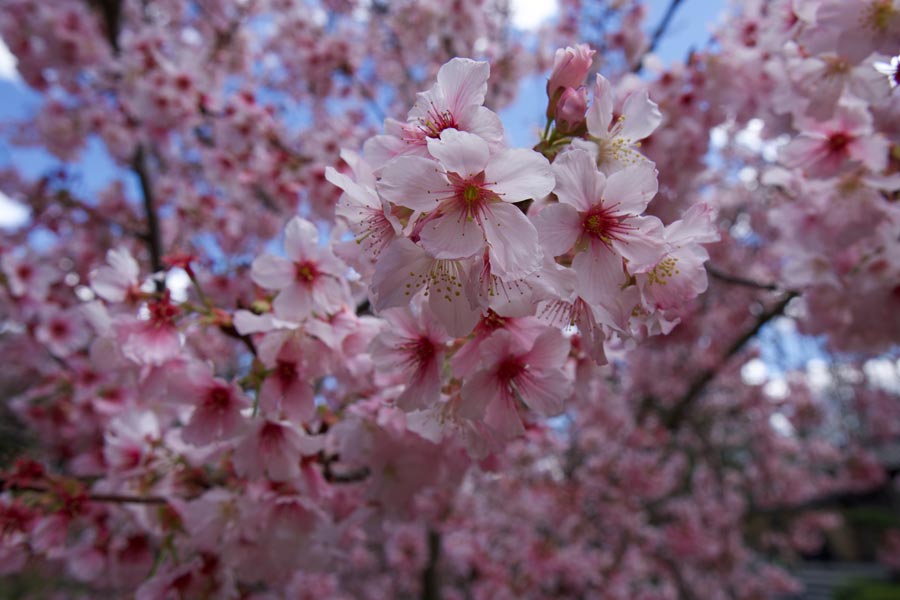 Work begun by World’s Fairs was continued in the United States by Japanese Americans. The fourth and last section of the exhibition, “Stewarding the Land: Honoring the Japanese American Journey,” focuses on their contributions as nursery owners, farmers, and florists. In the early 20th century, many Japanese Americans were employed in floriculture and were among the main producers of cut flowers in Southern California. Overcoming discriminatory obstacles, they built their own flower market, which still exists in downtown Los Angeles today. Japanese American florists operated establishments such as Flower View Gardens, which was founded by Arthur Ito, a luminary in floriculture whose papers came to The Huntington in 2016.

Botanical gifts from Japan renew themselves each year, and every successive season reminds us of the joys of cultivating flowers that came from Japan in our gardens. It is an honor to represent The Huntington as guest curator for the Portland Japanese Garden’s exhibition and spotlight the role that Japanese Americans played in the greening of the United States.

Robert Hori is the gardens cultural curator and program director at The Huntington.