Abortion and the Historical Record 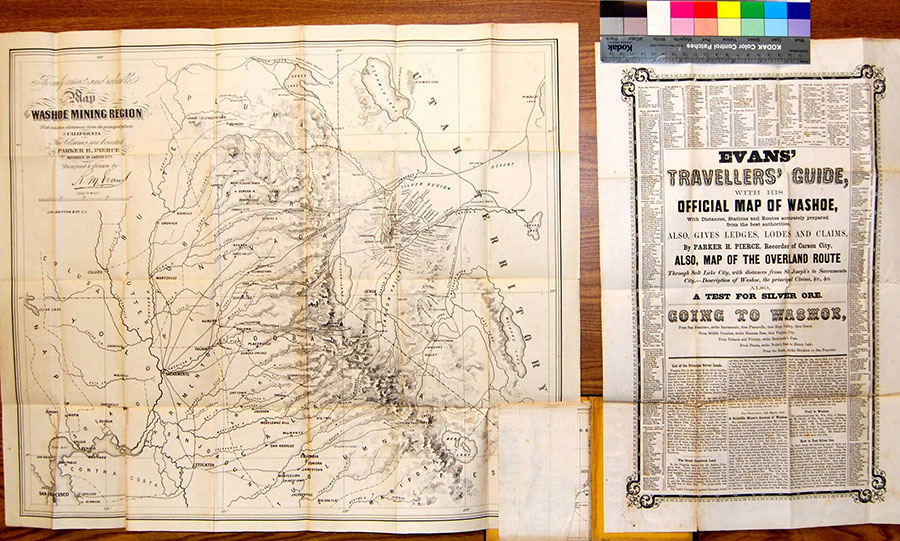 The only correct and reliable Map of the Washoe Mining Region with relative distances from the principal places of California, 1859–1861. The claims are located by Parker H. Pierce, recorder of Carson City. Designed and drawn by R. M. Evans, cartographer, and Kuchel & Dresel, lithographers. Together with Evans’ Travellers’ Guide. The Huntington Library, Art Museum, and Botanical Gardens.

On Sept. 2, 1859, Lucy E. Nuttall died in Nevada County, California. Very little is known about Lucy. Based on the census and coroner’s data, we know that she was about 33 or 34, married to a man named John Nuttall, and had reportedly died from an “in of bowds,” or an infection of the bowels. Compared to the causes of death listed for others alongside Lucy—including “childbirth,” “consumption,” “disease of liver,” and “disease of brain”—the reason for Lucy’s demise may seem unremarkable. This fact serves as a reminder that lifespans were shorter and conditions generally unhealthier for Californians in the rough and tumble of the 19th century.

However, if we look beyond these records to another document, we can see that Lucy’s untimely death tells a much bigger and more illuminating story: Lucy died of complications following an abortion. 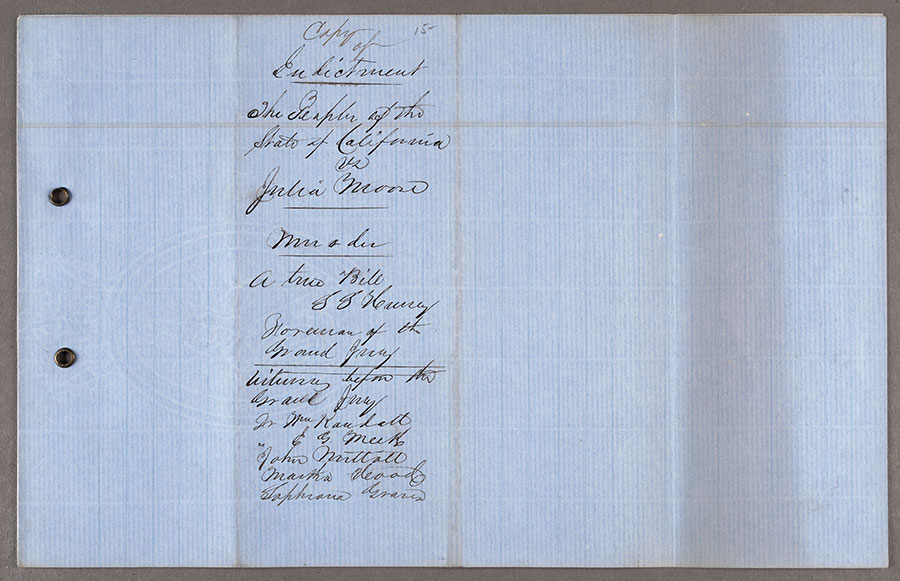 Cover page of The People of the State of California vs. Julia Moore, 1859, copy of indictment. The Huntington Library, Art Museum, and Botanical Gardens.

A woman named Julia Moore was accused of using a metal hook-like instrument “feloniously, unlawfully and of her malice aforethought” to perform an abortion on Lucy on Aug. 19, 1859. The indictment said that Moore “then and there violently, wickedly and inhumanly did force and thrust [the instrument], with a wicked intent” to procure Lucy’s miscarriage. We don’t know how far along Lucy was in her pregnancy, but the indictment suggests that the procedure Moore performed resulted in the stillbirth of Lucy’s child.

Lucy “languish[ed]” for nearly four weeks after her induced abortion and eventually died on Sept. 2. The hook-like instrument, or curette, that Moore wielded likely perforated Lucy’s bowels, causing the infection. Or else the curette was unclean and introduced bacteria to her reproductive tract. Both possibilities would have resulted in inflammation, infection, and death. Unfortunately, this wasn’t uncommon in abortion cases before the 1930s and 1940s. In the years before the discovery of germ theory and, later, antibiotics, there was little anyone could do to stop a bacterial infection. Furthermore, because of the shame and stigma often associated with abortions, women rarely sought treatment until their conditions became unbearable—usually after their infections had turned fatally septic. 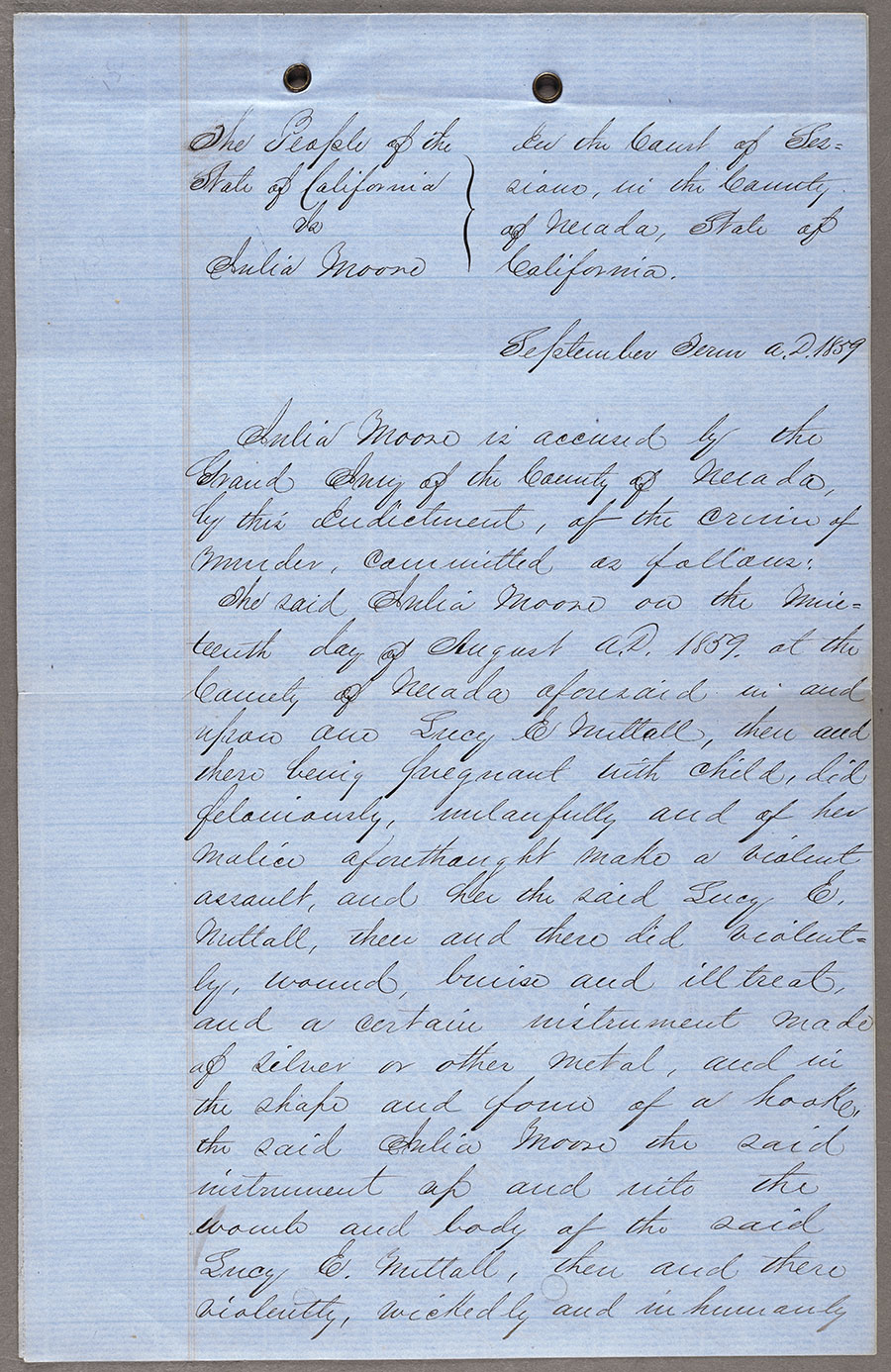 First page of The People of the State of California vs. Julia Moore, 1859, copy of indictment. The Huntington Library, Art Museum, and Botanical Gardens.

We know very little about Lucy or Julia Moore individually; however, as scholars continue to explore the world of early California, we can begin to make more sense of the times they lived through and the options they felt they had. In Intimate Frontiers: Sex, Gender, and Culture in Old California (University of New Mexico Press, 1999), historian Albert Hurtado wrote about the abortion-related death in 1860 of a young woman named Amelia Kuschinsky in Shasta County, California. Lucy’s and Amelia’s cases were similar in some respects. Both women lived near mining camps and died after having abortions, and both abortions were illegal under the existing California law, which permitted abortions only when performed by medical professionals who believed the procedure was necessary to preserve a woman’s life. In Amelia’s case, the abortion was performed by a physician but without a medical reason to justify the procedure. In Lucy’s case, the procedure was executed by a person who was not a qualified medical professional. 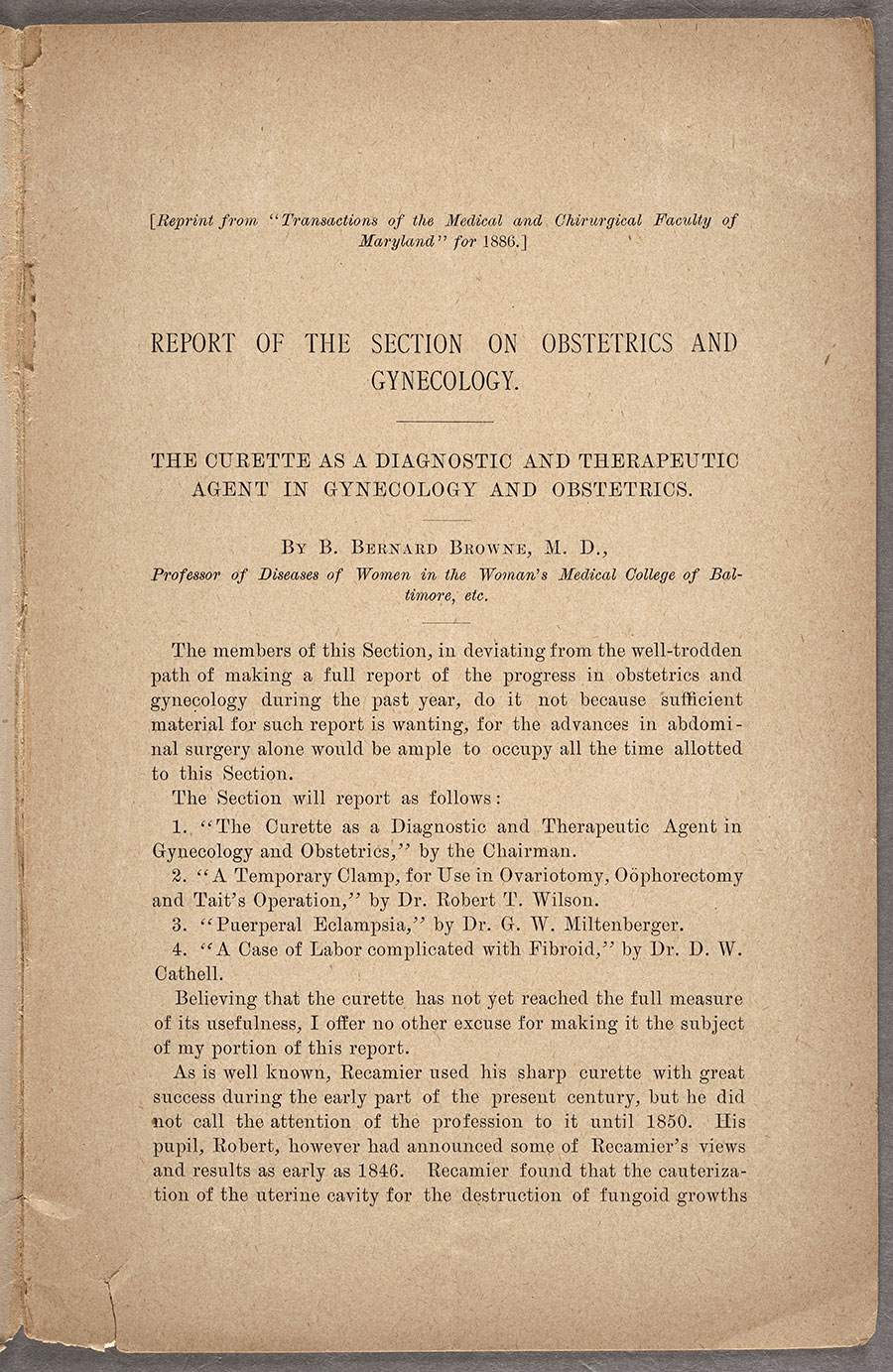 B. Bernard Brown, M.D., On the Use of the Curette as a Therapeutic Agent in Gynecological Practice, read before the Clinical Society of Baltimore, June 2, 1882. Lawrence D. Longo and Betty Jeanne Longo Collection in Reproductive Biology. The Huntington Library, Art Museum, and Botanical Gardens.

What precipitated Amelia’s abortion seems clear—she was young (15 or 16) and pregnant with her married employer’s child. Lucy’s reason for seeking an abortion is less obvious: She was 33 or 34 and married, yet she sought the services of an unqualified practitioner. What was running through Lucy’s mind when she agreed to let Moore introduce a hook-like instrument into her body? Was she in a troubled marriage? Had she had a difficult pregnancy in the past? Did she simply not want to be pregnant?

Moore’s legal cases—one for abortion and one for murder—were eventually dismissed, and she disappeared from the historical record. We may never know the whole story, but Lucy’s untimely death provides a window through which we can view a place and time when abortion access was highly limited. What Hurtado concluded regarding Amelia’s case can be applied equally to Lucy’s: She “possessed a body that was her entire estate in the world, but which she did not fully control.”

Alfred A. Hart, Looking across Truckee Meadows, toward Sierra Nevada Mountains, near Camp 37, 1866–69. A. A, Hart Stereographs of the Central Pacific Railroad. The Huntington Library, Art Museum, and Botanical Gardens.

Alicia Gutierrez-Romine is an assistant professor of history at La Sierra University, a 2022–23 short-term fellow at The Huntington, and author of From Back Alley to the Border: Criminal Abortion in California, 1920–1969 (University of Nebraska Press, 2020).