Architects of a Golden Age 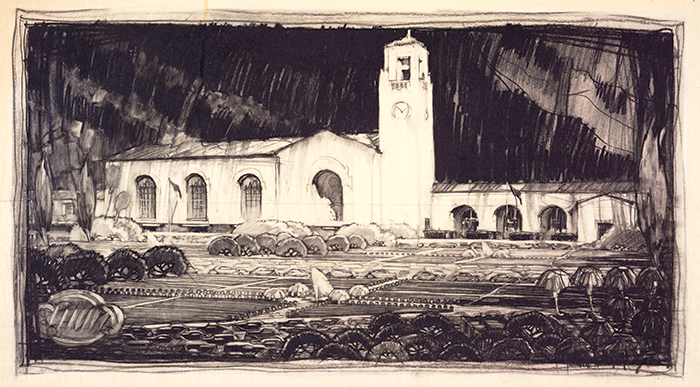 Between World War I and World War II, Los Angeles experienced rapid growth, attracting new, talented architects both locally and from other parts of the U.S. The exhibition “Architects of a Golden Age: Highlights from The Huntington’s Southern California Architecture Collection,” opening in the West Hall of the Library on Oct. 6, captures this innovative period in 21 original drawings and plans. (The show continues through Jan. 21, 2019.)

The exhibition marks the first general survey of this collection. Started around 1978, the collection coincided with a preservation movement launched in response to the threat that redevelopment posed to major Los Angeles buildings. 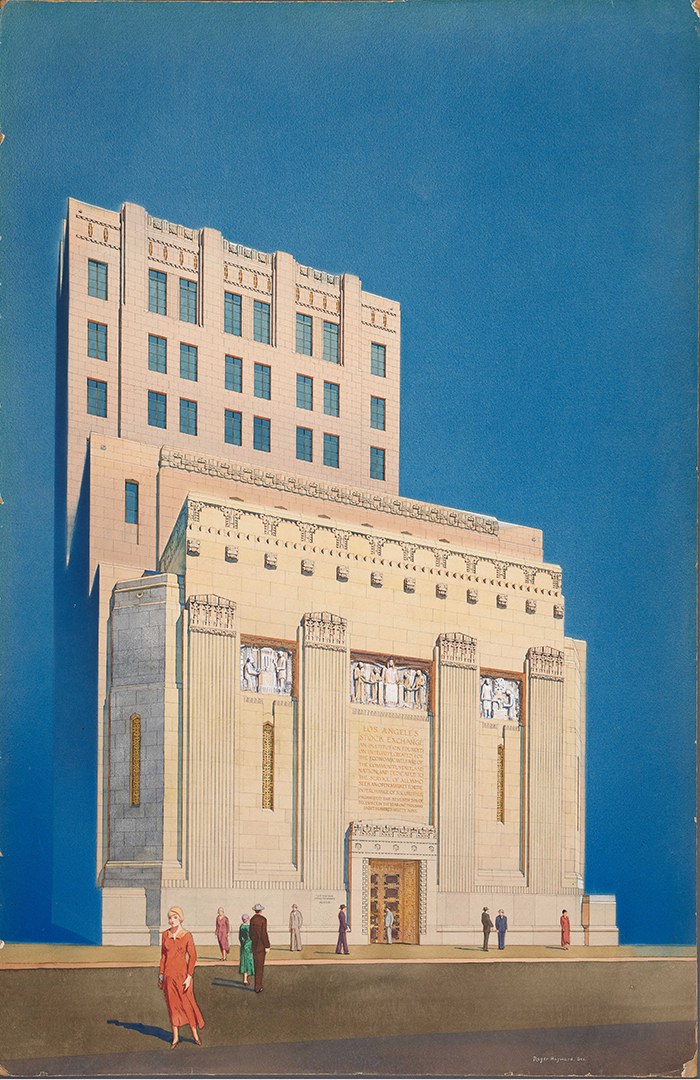 Through “Architects of a Golden Age,” visitors can discover the people who created elegant, powerful, whimsical, and iconic buildings in Los Angeles in the early to mid-20th century. The visitor may recognize the work of Wallace Neff, whose Spanish- and Mediterranean-style residences exerted a strong influence on architects of Southern California homes. The names of some of the other architects represented in the exhibition have faded from general consciousness, even though their buildings may be well known landmarks that still stand. 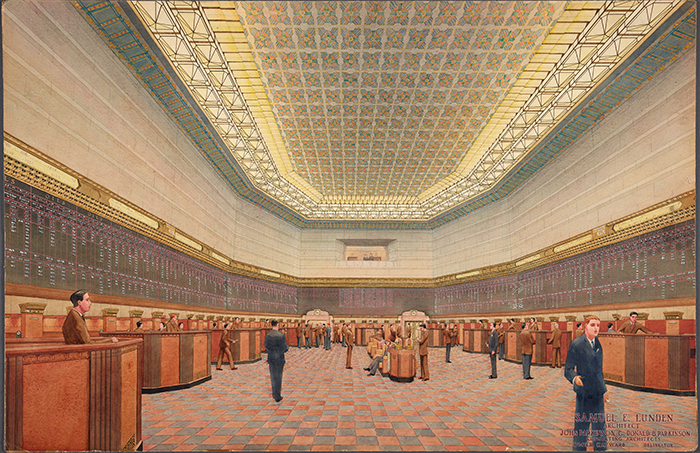 For example, a charcoal rendering of Union Station’s facade represents the work of Edward Warren Hoak; he spent countless hours refining such details as the clock tower, doors, arcades, and exterior ornamentation of the Mission revival-style Los Angeles icon.

Among the most striking images in the exhibition are two watercolors of the Stock Exchange by Roger Hayward: the first depicts the towering exterior of the 12-story granite building, designed by Samuel E. Lunden; the second, the Exchange’s vast trading floor, featuring Native American and Near East motifs, designed by Julian Ellsworth Garnsey. The preserved structure on Spring Street in downtown Los Angeles now houses a popular, four-level nightclub. Lunden made many other contributions to the city’s built environment, including USC’s Doheny Library and the 1928 wing of the Biltmore Hotel.

In the early 1930s, Chinese community leaders decided to rebuild Chinatown in a new location, the old site having been seized for the construction of Union Station. Eminent immigration attorney You Chung Hong was part of a coalition of business owners that hired Adrian Wilson and Erle Webster to create designs that blended traditional Chinese architecture with American influences. Three exhibition items show such structures—including the East Gate or Gate of Maternal Virtue—and neon lighting enhancing curved rooflines and octagonal windows.

Developer A.R. Fraser envisioned the world’s largest pleasure pier, extending 1,000 feet into the ocean in Santa Monica. He contracted architects A.W. Eager and Frank Eager to design a dancing pavilion for the extravaganza. An ink drawing in the exhibition preserves their ornate, Islamic-revival-style concept. 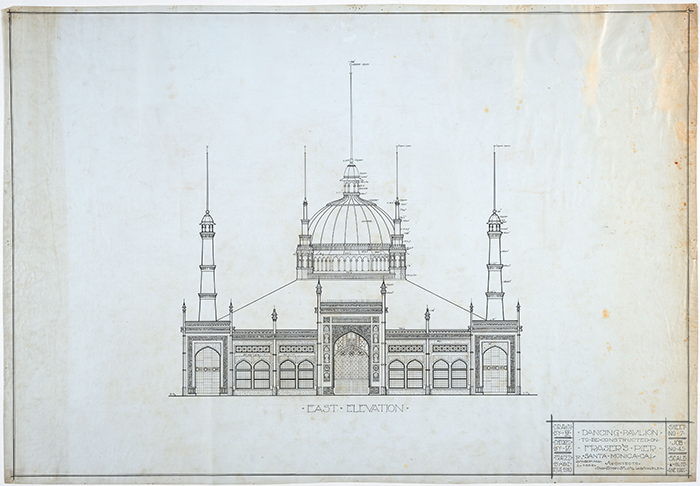 A.W. Eager, who happens to be curator Erin Chase’s great-great-grandfather, also designed the historic O’Melveny House in Hancock Park and the Raymond Hotel in South Pasadena. As a child, Chase viewed drawings by him in her great-grandmother’s garage at just about the time that The Huntington was negotiating with the family about acquiring his papers.

The Wallace Neff most people know is seen in his elevation drawing of the Libbey Stables on the Ojai estate of glass tycoon Edward Drummond Libbey. Another Neff design, his Airform house, never built, for film producer Manuel Reachi, may come as a surprise. Neff addressed the housing shortage during and after World War II with this new construction method of inflating a balloon over a slab foundation and spraying it with concrete. The so-called “bubble houses” proved more popular in Third-World countries than in the U.S.—though one still exists in Pasadena. 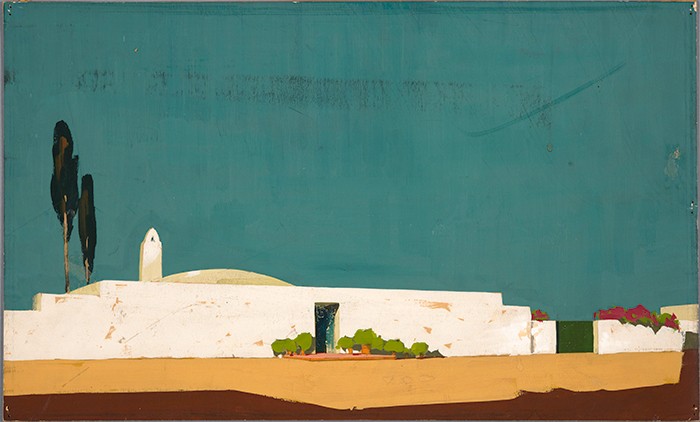 All of the exhibition works were produced by hand on paper, in contrast to today, when renderings are, for the most part, produced by computer. A remarkable pool of architects thus made individual expressions of their designs—creating what viewers can now appreciate as the artifacts of a golden age.

“Architects of a Golden Age: Highlights from The Huntington’s Southern California Architecture Collection” is made possible by the Robert F. Erburu Exhibition Endowment and the Tracy H. and Kenneth S. McCormick Endowment for the Study of Architecture and Design.

You can watch an interview of Erin Chase and learn more about the exhibition on YouTube.