Birthday of a Genius

This weekend, Shakespeare lovers from all over the world will descend on the playwright’s birthplace of Stratford-upon-Avon to celebrate the Bard’s 450th birthday with performances, processions, pageants, readings, and parties. (Shakespeare was baptized April 26, 1564, and scholars have long believed he was born on April 23.) Closer to home, you can find any number of ways to commemorate the special occasion, including a quiet visit to “Remarkable Works, Remarkable Times: Highlights from the Huntington Library,” where you can see some of The Huntington’s greatest treasures, including items in a Shakespeare-themed section titled “A Book of Plays by a Genius.”

Chief among The Huntington’s Shakespeare holdings is the focal point of that section, the First Folio (1623), the most reliable source for 36 of his plays. No plays in Shakespeare’s hand survived. His former partners in the King’s Men theatre company edited the comedies, tragedies, and histories according to “the true originall copies.” Half the plays—including Macbeth and Julius Caesar—had not appeared in print before and might not have been available to future generations without the First Folio. 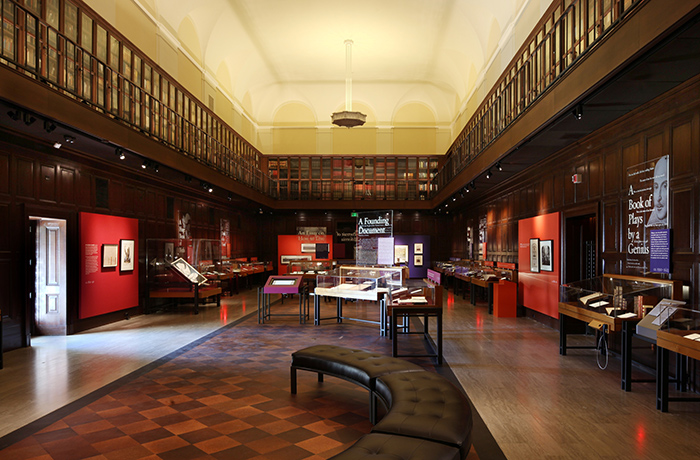 The First Folio anchors “A Book of Plays by a Genius” (at far right), one of 12 sections in “Remarkable Works, Remarkable Times: Highlights from the Huntington Library.”

One play that was published prior to the First Folio is Hamlet. It appeared in print four times during Shakespeare’s lifetime, which suggests that it was a hit from the beginning. The library exhibition includes the 1611 edition as well as a facsimile of the “To be, or not to be” soliloquy from the 1603 Hamlet. (The Huntington’s copy of that edition, one of two in existence, is too fragile for display.) Some scholars speculate that this abbreviated version of the tragedy was used when the company toured outside London, a reminder that plays are meant to live and breathe and that theatre adapts to circumstances. The display also includes an audio component that features an actor reading the different versions of the soliloquy.

Shakespeare’s world was turbulent and dynamic. As in other sections of “Remarkable Works, Remarkable Times,” the Shakespeare cases represent a miniature exhibition in its own right.

“The idea here is to give people a sense of the world in which these key works were produced, not just have them stand in isolation,” said David Zeidberg , the Avery Director of the Library, when the Main Hall reopened in November 2013. 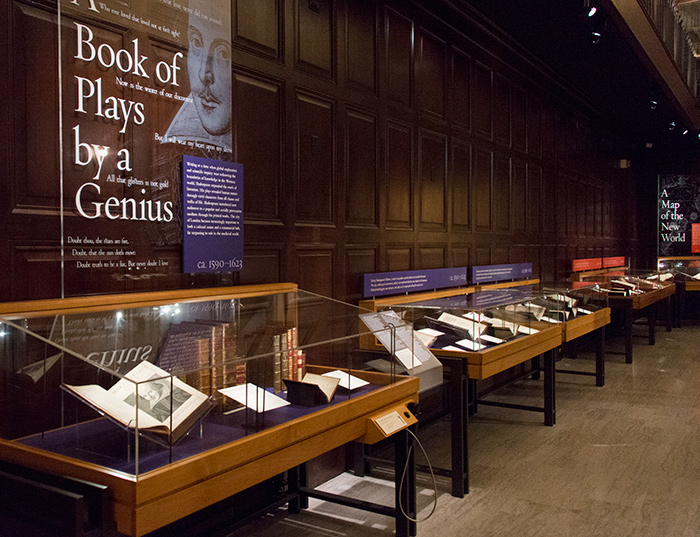 Among these other items is a copy of a 1605 speech by King James I, who spoke about the Gunpowder Plot to overthrow the monarch and Parliament. The object label next to the published speech explains that Macbeth, in which the good King Duncan is murdered, might have been a gesture of Shakespeare’s loyalty to King James.

This was also a time of exploration. Silvester Jourdain’s Discovery of the Barmudas (1610) recounts a voyage from Plymouth, England, to Jamestown, Va., that was so horrific that the crew, fearing the end was at hand, got roaring drunk. Could this be the inspiration for the scene in Shakespeare’s last play, The Tempest, in which Trinculo, Stefano, and Caliban imbibe “celestial liquor” to excess?

The Herball or Generall Historie of Plantes (1597), by John Gerard, was a widely known, extensively illustrated work that included recipes for topical remedies as well as antidotes for poison. Shakespeare’s plays mention many of the plants referenced in the work. Macbeth, distraught with the arrival of the English army opposing his own, asks his doctor for a concoction to ward off the enemy:

What rhubarb, senna or what purgative drug
Would scour these English hence?

Other works of Shakespeare’s era give added context to the Bard’s plays.

In Hamlet, Ophelia, in her madness, hands out herbs. To Laertes her brother,

There’s plenty of time to honor Shakespeare. The celebration has a three-year span: April 23, 2016, eerily, is the 400th anniversary of Shakespeare’s death.

On May 6 in the Ahmanson Room of the Brody Botanical Center, Bradin Cormack, professor of English at Princeton University, offers further illumination of Hamlet , Macbeth , and other Shakespeare plays in a free lecture at 7:30 p.m. The event is free but requires reservations: brownpapertickets.com, 800-838-3006.