Blue Skies that Launched an Industry

Preliminary weather forecasts were looking iffy for the final launch of the space shuttle program, but they didn't keep thousands of people from showing up at the Kennedy Space Center in anticipation of a successful final countdown. They weren't disappointed. Atlantis lifted off at precisely 11:29:04 EDT this morning and is scheduled to return from its final mission on July 20. 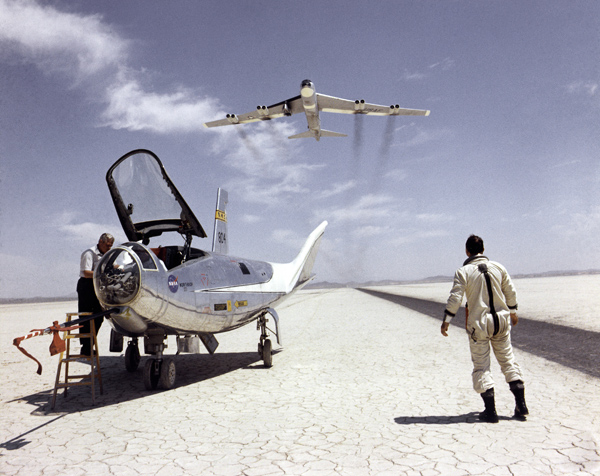 In the interview on "Which Way, L.A.?" Westwick said that sunshine and blue skies presented idyllic conditions for pilots as well as engineers, who could build airplanes year round. But he concedes that a perfect storm of other factors were at play, too. Strong boosters, local universities, and a variety of related industries helped establish the region as the center of the aerospace industry, dating back to the 1930s. Factor in the entrepreneurial and risk-taking spirit that drove people west as well as the fun-loving and creative energy that also led to innovations in surfing and hot-rod racing, and you have an idea why Westwick often tells people that "Southern California as we know it would not exist without aerospace."

"Blue Sky Metropolis" will be on view in the West Hall of the Library from Oct. 8, 2011, to Jan. 9, 2012. Matthew Hersch, a postdoctoral fellow in history at USC, is the other co-curator of the exhibition.