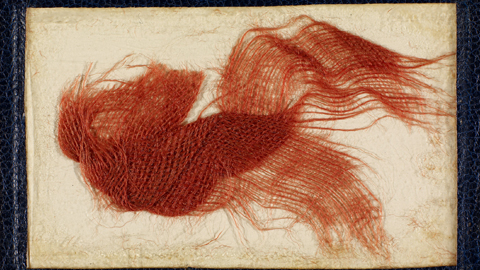 A fragment of the American flag from Fort Sumter and a portrait of Major Robert Anderson are bound into the first volume of The Huntington's set of Battles and Leaders of the Civil War. Copyright Huntington Library, Art Collections, and Botanical Gardens.

Confederate forces attacked Fort Sumter early in the morning of April 12, 1861. Two days later, Major Robert Anderson surrendered the fortification off the coast of South Carolina, but not before lowering the American flag and keeping it as a souvenir. A fragment of that flag is bound into a volume of a unique set of books in The Huntington Library.

The books originally belonged to Civil War veteran John Page Nicholson, who became an avid collector following the war, saving hundreds of manuscripts, reports, letters, and maps. After obtaining the small piece of red cloth from that famous flag, he bound it into the inside cover of the first volume of Battles and Leaders of the Civil War, a hugely popular series published by the editors of Century Magazine from 1883 to 1888. The strength of the articles came from the contributors, who were not journalists but rather the military leaders who participated in the war, such as P. G. T. Beauregard (the Confederate general who had attacked Fort Sumter) and Ulysses S. Grant (the Union general and later president who likely developed the confidence to write a memoir following the Century assignment).

After Nicholson's death in 1921, Henry Huntington purchased all of the memorabilia, including Nicholson's one-of-a-kind set of Battles and Leaders. "The series was issued in four volumes," said Jennifer Watts, curator of photographs at The Huntington, "but Nicholson took the volumes and bound in letters, photographs, ephemera, and other odds and ends as additional illustrations, which means that it went from four to 18 volumes, all bound in blue morocco leather." 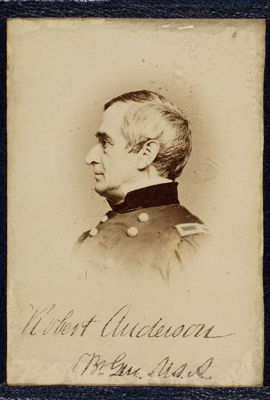 Watts is immersing herself in The Huntington's collections in preparation of her exhibition of Civil War photographs in the fall of 2012, which will not include the flag fragment but will feature Nicholson's photo albums and images related to the establishment of Gettysburg as a national monument. Among the other Huntington events related to the sesquicentennial of the Civil War will be a companion manuscripts exhibition curated by Olga Tsapina, the Norris Foundation Curator of American Historical Manuscripts, and a conference in October 2011 called "Civil War Lives," organized by historians Gary Gallagher and Joan Waugh.

Coincidentally, Waugh played an active role in a new anthology of essays from the very same Battles and Leaders magazine series. Historian Harold Holzer edited the compilation Hearts Touched By Fire: The Best of "Battles and Leaders of the Civil War" for the Modern Library and chose five esteemed historians to pick their favorite essays from each of the five years between 1861 and 1865. Waugh drew 1864.

This past weekend, Lincoln biographer and Huntington research fellow Ronald C. White Jr. reviewed Hearts Touched By Fire for the Los Angeles Times along with another new book called The Civil War: The First Year Told by Those Who Lived It (Library of America). White acknowledges that the sesquicentennial commemoration is "contested territory" and asks, "How can we best enter this controversial territory?" In his praise for these two books, White takes nothing away from his fellow historians by encouraging readers to go straight to the primary materials, where they can "feel the immediacy of the Civil War as experienced by its participants."

Also busy this past week was David W. Blight, the Rogers Distinguished Fellow at The Huntington in 2010-11. The professor of history from Yale spoke on a New York Times TimesTalks panel on April 4 with historian Adam Goodheart and documentary filmmaker Ken Burns. You can download "Disunion: The Civil War" from iTunes, where you can also find The Huntington's audio programming on Abraham Lincoln and the Civil War.