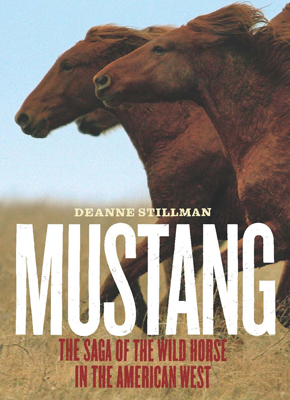 Authors who conduct research at the Huntington Library don't often see their books turned into movies or country songs. But one chapter from Deanne Stillman's book Mustang: The Saga of the Wild Horse in the American West is being adapted into a movie now in development for the Hallmark Channel, while another chapter inspired the song "Blood and Gold" by the alt-country band Granville Automatic.

Stillman published her book in 2008, ten years after she read about a massacre of 34 horses in the mountains outside Reno, Nev. The incident inspired her to take a look at the story of the wild horse on this continent. In her book, she traces the history of the mustang from its Ice Age ancestor in North America and its reemergence with Hernando Cortés through the frontier era of cattle drives and into the age of Hollywood and current concerns about its survival in the wild. She conducted some of the research here at The Huntington, where she discovered a late 19th-centry book by cowboy Charles Siringo, who wrote heartbreakingly about the brutality endured by working horses on cattle drives of the frontier era. We profiled her and her book in the spring/summer 2009 issue of Huntington Frontiers magazine.

The Hallmark movie Wild Horse Annie will tell the story of Velma Johnston, a celebrated defender of wild horses and burros whose efforts led directly to passage in 1971 of the Wild Free Roaming Horse and Burro Act. The movie is slated to run in the summer of 2012 and will star Wendie Malick in the title role.

Stillman, too, has played a role in influencing policy. Before her book was published, she began writing op-eds in the Los Angeles Times and elsewhere about the ongoing war against the mustang. These began to fuel a grassroots campaign, already underway. Attention increased when her book came out and won praise in many publications, from the Atlantic Monthly to the Economist, was named a Los Angeles Times "Best Book 2008," and won the California Book Award silver medal for nonfiction. Shortly after the paperback release in 2009, the House voted to pass the ROAM act (HR 1018, Restore Our American Mustangs), a bill that would expand on the 1971 legislation and widen protection for wild horses. While the bill never made it to a vote in the Senate, Stillman's book has affected policies in other ways. Her description of the brutality of roundups of wild horses in Nevada is a significant part of a nationwide effort that is leading to cutbacks in such practices and fueling a move toward more widespread use of other strategies for controlling the horse population, such as birth control. "Yet massive round-ups continue," Stillman says, "and in today's highly charged political atmosphere, legislators in Nevada have introduced a bill, AB-329, that would deny access to water for wild horses and burros."

Stillman continues to talk about the book on tour while also writing the column "Letter from the West" for www.truthdig.com. She is currently writing Mojave Manhunt for Nation Books, based on her Rolling Stone article of the same name, and is a member of the core faculty at the UC Riverside-Palm Desert Low Residency MFA Creative Writing Program.