Collections of a Feather

When I was working on my recent book about Robert Ridgway, the Smithsonian’s first curator of birds, I got to thinking about the large sets of stuffed birds, or “study skins,” that he and his fellow bird professionals kept in drawers and cabinets in natural history museums.

I’m well underway with a new project—an environmental history of five birds from my home state, Hawaii—and I can’t resist taking a closer look at sets of those study skins myself. I’ve now paid visits to the American Museum of Natural History in New York, the National Museum of Natural History at the Smithsonian, and the Bishop Museum in Hawaii to get a glimpse of the remains of the birds themselves—common, threatened, or long gone.

Just as archival materials in the aggregate—letters by the dozens, hundreds, or thousands—provide useful grist for a research mill, so too do these bird collections, similarly arrayed by scientists in rows of dozens or even hundreds, reveal new things about the world. Millions of dead birds fill the drawers and cabinets of museums around the world. But they are more than just feathery accessories used for museum displays and the amusements of visitors. They are the objects of often-intense scientific study, and for a wide range of purposes. These study skins tell a tremendous number of diverse stories, based on information that scientists can glean from the plumage, morphology, size, and even parasites and insects found on the skins. In the aggregate, though, they also tell a vital story—one about evolution, speciation, and the changes that animals go through over space and time. 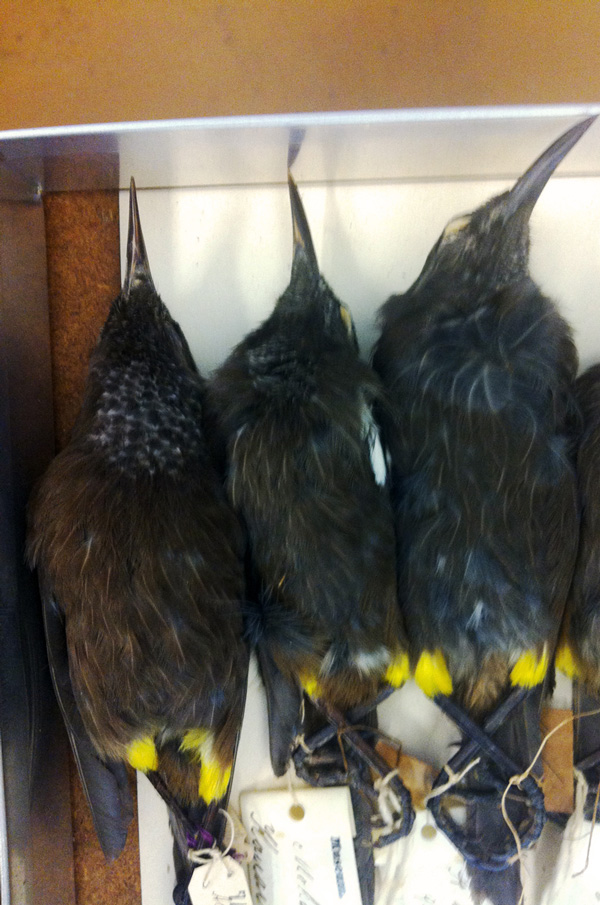 One essential use of these study skins has been to determine evidence of species change. Lay out a long series of the same species of birds and sort them by, say, beak size, and suddenly a whole world might emerge. A long run of stuffed birds, tucked away in those museum drawers and cabinets, allows variations in physical condition to become apparent, and the upper and lower ranges of sizes, colors, and shapes of body parts of the same species let naturalists catch birds in the act of evolving, as it were.

There is another unexpected element to these study skins, too, and it’s one that’s related to the manuscript record: the small descriptive tags that are attached to birds by collectors that describe the bird species, as well as its size, sex, location collected, and—depending on the era—more lavish details such as the stomach contents of the bird, the specific habitat in which it was found, and so on.

Both archivists and bird collections managers tend to be generous souls, overseeing materials that are the idiosyncratic passions of their users, and they instinctively understand the benefit of in-person investigation. They facilitate it, and often encourage it, even with the rarest of their holdings. Being able to see an original letter is the best. It lets one read the handwriting better, lets one smell it (Aha! Such-and-such a writer was a smoker!), feel its texture, and absorb a thousand other subtle characteristics that can inform a writer’s narrative. In much the same way, seeing an original bird in the flesh—or at least the skin and feathers—can tell someone a great deal about a bird. For instance, some Hawaiian birds were known to have an extremely musky, almost overpowering odor—what one 19th-century naturalist likened to an old wet rug. No one knows the purpose of this smell, which was common to one (and only one) family of Hawaiian birds, all of which are now extinct. But to get a little whiff of the much-faded smell is to assimilate new information not available at a distance. Even in the modern digital age, it’s worth taking the time to slow down and smell the bird.

Lewis’s book, The Feathery Tribe: Robert Ridgway and the Modern Study of Birds, is published by Yale University Press.

Daniel Lewis is the Dibner Senior Curator of the History of Science, Medicine, and Technology and the head of the manuscripts department at The Huntington.