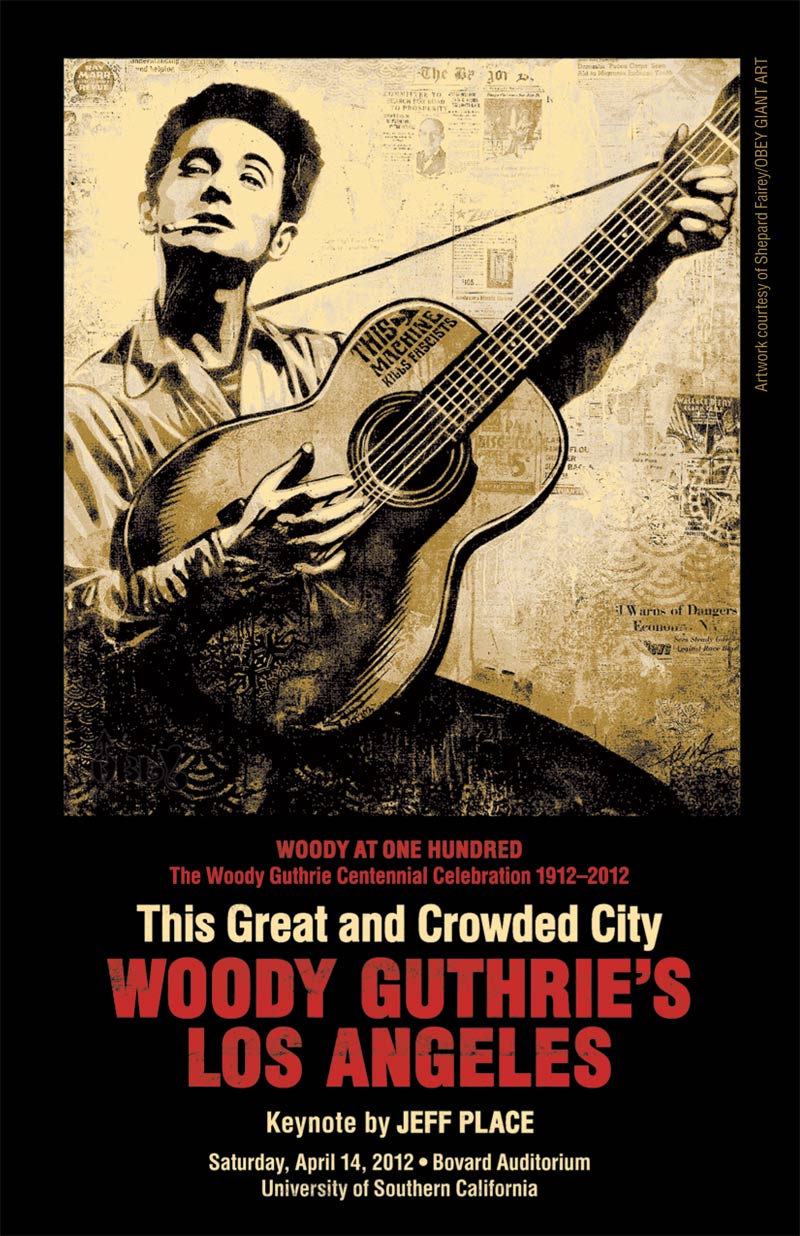 It’s not often that you go to an academic conference and a concert breaks out, but that’s what happened in April when scholars, musicians, and writers gathered at USC for “This Great and Crowded City: Woody Guthrie’s Los Angeles.” The famed folk singer would have turned 100 on July 14, and we’re celebrating his birthday by posting audio of some of those presentations to The Huntington’s iTunes U site.

In his keynote address, Jeff Place of the Smithsonian Center for Folklife and Cultural Heritage described the rich musical archive left by Woody Guthrie. Since speaking at the conference, Place has produced Woody at 100: The Woody Guthrie Centennial Collection, a three-CD set of 57 Guthrie tracks accompanied by a 150-page large-format book.

Contributors to the liner notes include Robert Santelli, executive director of the GRAMMY Museum and co-sponsor of the conference, and Peter La Chappelle, associate professor of history at Nevada State College, who also spoke at the conference, recounting how he found rare recordings by Guthrie at the Southern California Library for Social Studies and Research when he was a graduate student at USC about 10 years ago.

“The Great and Crowded City” was also co-sponsored by the Huntington-USC Institute on California and the West and Visions and Voices: The USC Arts & Humanities Initiative. Interspersing the academic papers were performances by USC music students who, in the words of Christopher Sampson, associate dean of the popular music program at the USC Thornton School of Music, embody “the direct influence and impact of Woody Guthrie.”

That legacy was also evident in the presentation by historians Dan Cady (of Cal State Fresno) and Doug Flamming (of Georgia Tech), who managed to deliver a probing academic paper peppered by their own renditions of classics from the Guthrie canon: “Do, Re, Me,” “Stewball,” and “Rambling Round.” These songs, said Flamming, “illustrated how Guthrie altered his view about race relations. Woody Guthrie was ahead of his time. Not only did he cross the color line in the late 1930s, he tried to erase it.”

Guthrie’s sympathies extended to Mexican migrant workers, said Josh Kun, associate professor at the Annenberg School for Communication and Journalism at USC. Inspired by the deaths of 32 farmworkers in a plane crash in 1948, Guthrie penned “Deportees,” a song that still surpasses “This Land is Your Land” as the anthem of migrant America, especially in today’s California (and Arizona) political landscape. Kun joined scholars Bryant Simon (Temple University) and Rick Wartzman (Drucker Institute, Claremont Graduate University) in tracing Guthrie’s path from the western migration of John Steibeck’s Tom Joad to the north-south migrations that take place everyday in the American West today.

“Tune in to L.A. stations like 105.5 La Que Buena,” said Kun, “and you’ll hear Tom Joad’s Mexican cousins, but also the ghost of Woody Guthrie himself, who, if he wandered back to Los Angeles, is probably somewhere singing along with a Mexican banda at the top of his lungs.”

You can download many of these presentations from iTunes U or click and listen to the bold links above and below. For more information about centennial celebrations that will continue throughout 2012, visit the website www.woody100.com. Presenters at “This Great and Crowded City” also included Ed Cray, Darryl Holter, Ron Briley, Philip Goff, and Emily Thompson. (A listing of their topics and their affiliations can be found here.) Musical performances included USC students Brett Fromson, Mia Minichiello, Jackson Morgan, Eric Radloff, and Madison Scheckel.

William Deverell, director of the Huntington-USC Institute on California and the West and co-organizer of the conference, reports that a volume of essays about Woody Guthrie is forthcoming.