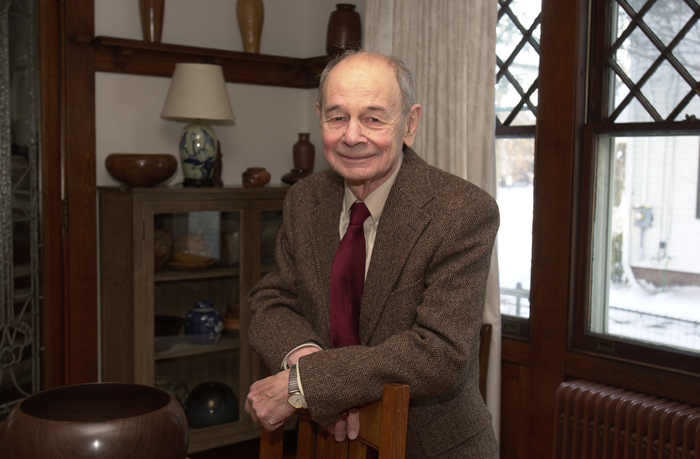 Historian Edmund S. Morgan died on Monday at the age of 97. Morgan was the Sterling Professor Emeritus of History at Yale University and author of numerous books on American history of the colonial and revolutionary eras. His relationship with The Huntington dates back to a fellowship during the 1952–53 academic year. In 1984, he gave the inaugural lecture in The Huntington’s Allan Nevins Lecture Series on 18th-century American history, speaking on “The People’s Choice: Elections and Electioneering in the 18th Century.”

In 2005, Morgan wrote an essay for the inaugural issue of Huntington Frontiers magazine. In “Cultivating Surprise,” he reflected on the serendipitous experience of research and offered a little advice to budding scholars. Below is a passage from that essay; you can read the full essay in the spring/summer 2005 issue of the magazine, available for download here.

I do not employ much of a method in doing historical research except to read indiscriminately everything I can lay my hands on that may relate to whatever topic has excited my curiosity. I have no system.

For me The Huntington has always been a good choice as the place to satisfy my curiosity in my own disorganized way. For one thing, it was a long way from home, away from academic duties, where I could not even be consulted about them. More importantly it had all the resources in books and manuscripts that I was likely to need. It always had a company of scholars with whom to talk and walk at lunchtime, not to talk about what I was doing—I never do that—but about ideas great and small. I have never had such stimulating conversation anywhere else. The reason I do not like to talk about my own research while doing it is that I lose the impulse, the necessity, of putting what I think I have found in writing. I firmly believe that too much discussion amounts to “talking your book away.” But talking about other ideas excites my own thought processes.

If you have studied any part of history enough to be curious about it, enough to want to do some research, you already are aware of the generally accepted views, the orthodox views, the controversies among the experts in the field, what is taken for granted and what is in dispute. You want to learn a little more about some question, and you go to the source materials that are presumably the foundation of the orthodox views. You come across something that you had not known about, something that surprises you a little. Cultivate that surprise. Do not say to yourself, “Oh, I didn’t know that,” and go on with your reading. Stop right there. Ask yourself, Why did I not know that? Is it contrary to what I had been led to expect? Is it because I did not know enough? Or is it because the people who crafted the orthodox interpretations did not know enough? Or perhaps their angle of vision was limited by what came before….

I could cite…examples of cultivating surprise from most of the books I have written. But I want to offer a couple of other pieces of advice. First, and probably most idiosyncratic, try to forget philosophies of history and theories of historical causation: Marxist, Straussian, postmodern, or whatever. You probably have one, conscious or unconscious, but try not to let it get in your way. Cultivate that surprise when the documents don’t seem to support your views. Next, try to keep your research and your writing together. Don’t wait until you think you have entirely completed your research before beginning to write. As soon as you begin to see connections between things that you had not noticed before, start writing what you think you have found out about them, even if these writings seem fragmentary. Don’t get too systematic. Don’t make elaborate outlines with headings and subheadings. Don’t spend a lot of time arranging your notes. Stop stalling and start writing.