The Eternal and the Ever-Changing 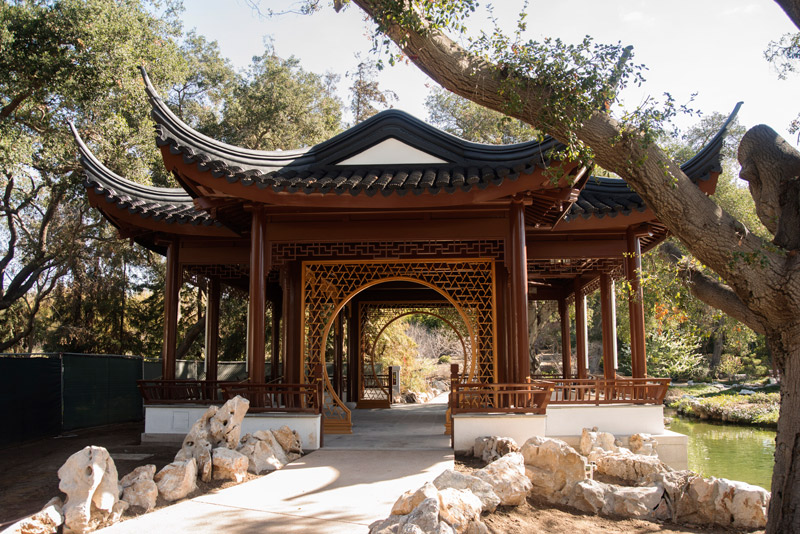 Entrance to the Clear and Transcendent pavilion in the Chinese Garden.

On Saturday, March 8, The Huntington will unveil three new features in the Chinese Garden: the Clear and Transcendent pavilion, the Lingering Clouds Peak rock grotto, and the Waveless Boat pavilion.

“A garden is never really finished,” says Steve Koblik, president of The Huntington. “It’s added to and changed over time.” The Chinese Garden first opened to visitors in 2008, so this marks a significant milestone in its second phase of development.

Of course the passing of the seasons is also part of a garden’s perpetual renewal. Just last week, a late winter rainstorm provided an opportunity to see the garden in misty, wet weather typical of Suzhou, China, site of the scholar's gardens that inspired our own Liu Fang Yuan, or Garden of Flowing Fragrance. 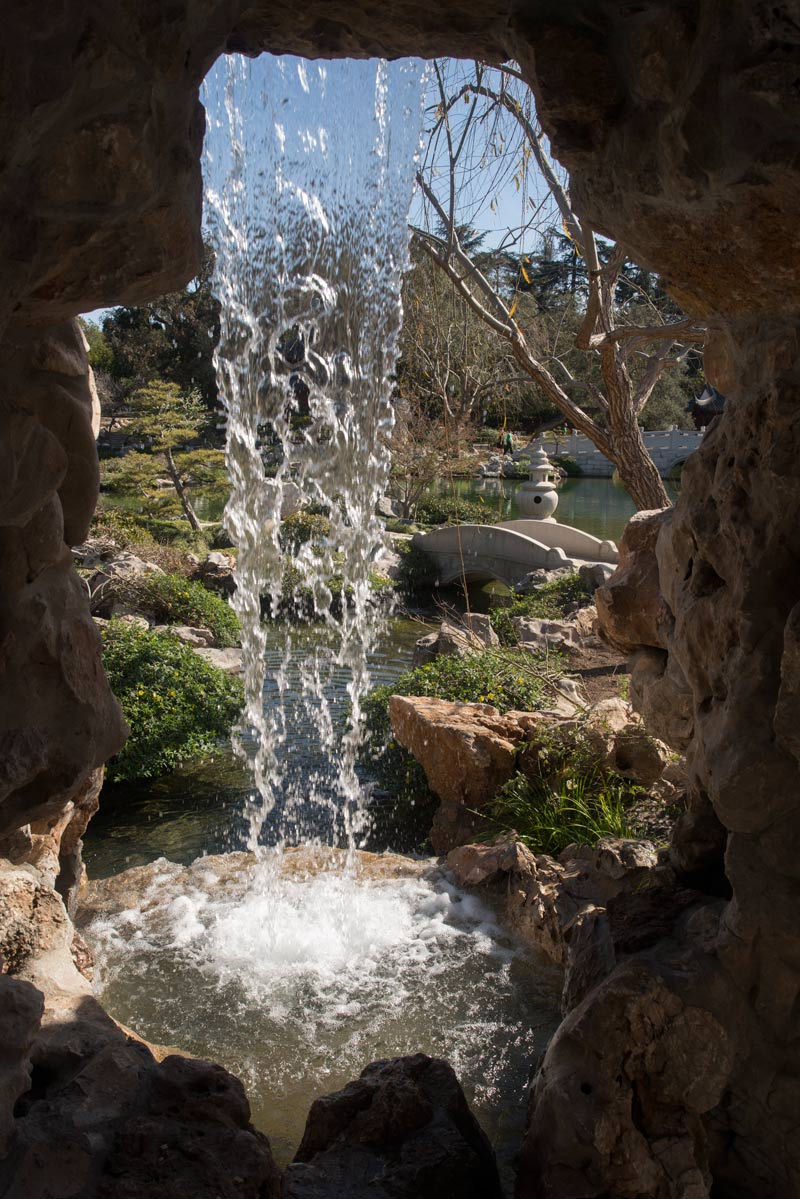 View from behind the waterfall in the Lingering Clouds Peak rock grotto.

Water plays a central role in the Lingering Clouds Peak rock grotto, which features a path underneath a waterfall. The tai hu rocks featured in the grotto are limestone imported from the Lake Tai region of China. June Li, curator of the Chinese Garden, explains that rock represents the eternal, while water represents the ever-changing.

“It is important for them to be together,” she said. 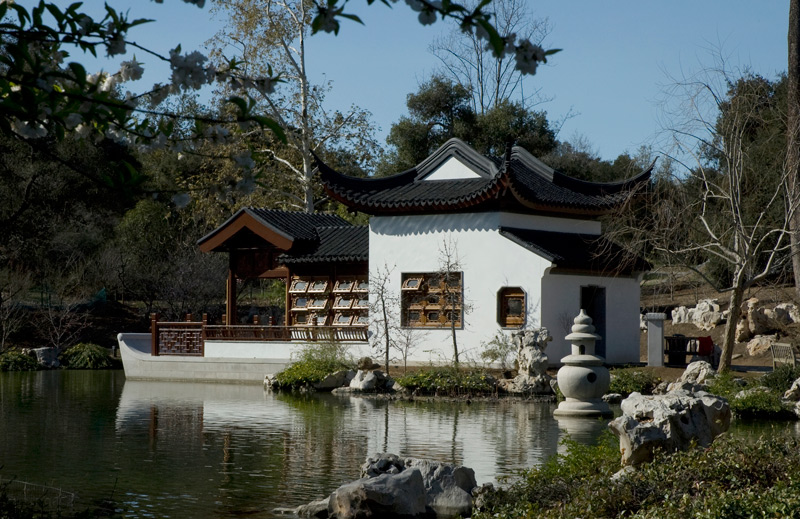 Inspiration for the Waveless Boat pavilion derived in part from the practice of Chinese painters, who often wrote about traveling by boat down a river to enjoy the scenery. After going back to their studios to record their trips in paintings, they would write poetic couplets inspired by the experiences, like the calligraphic panels on the Waveless Boat pavilion. And the word “Waveless,” or bubo, is often used in Chinese literature to describe a serene atmosphere, such as a boat gliding effortlessly over the water.

Designed to host performances, the open-sided Clear and Transcendent pavilion features a central screen of blond gingko wood—a striking contrast against the darker red pine of the ceiling—with panels that depict traditional Chinese musical instruments and scenes from the epic play The Peony Pavilion by Tang Xianzu (1550–1616), the “Chinese Shakespeare.” The screen panels are also doors that open up the pavilion.

Performances in this pavilion will face two directions: either toward the Lake of Reflected Fragrance, “so music can penetrate the garden,” according to Li, or toward the wooded area to the north and the future Court of Assembled Worthies, which will seat 350 people. 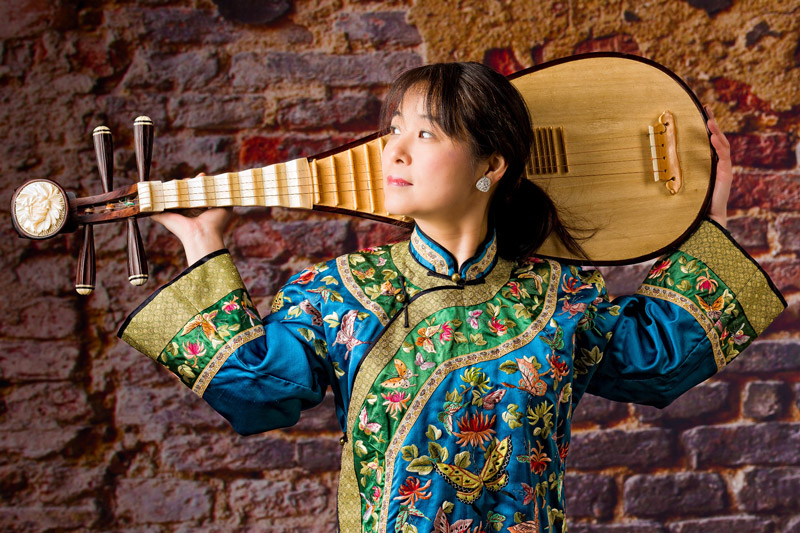 One of the first performances in the Clear and Transcendent pavilion has just been announced. The Huntington is premiering its Visiting Artist Program with a five-month residency by Wu Man, Musical America’s 2013 Instrumentalist of the Year. A virtuosa of the pipa, which is sometimes referred to as a Chinese lute, Wu has performed with Yo-Yo Ma as part of the Silk Road Project. She has also played with the New York Philharmonic, the Boston Symphony, and other international orchestras. While in residency, Wu will give lectures, play a public concert, and produce a work commissioned by The Huntington, to be performed in the Clear and Transcendent pavilion on June 18. She is also working with music students at Pasadena’s Elliot Middle School. “This program allows us to make this kind of music accessible to everyone,” said Li.

The hand-carved lattice in the Clear and Transcendent pavilion depicts a cracked-ice-and-flower pattern. In China, this signals early spring when frozen lakes melt and plum blossoms start to bloom. In San Marino, it’s a sign that it’s time to visit the Chinese Garden.