EXHIBITIONS | An Exhibition of Two Cities 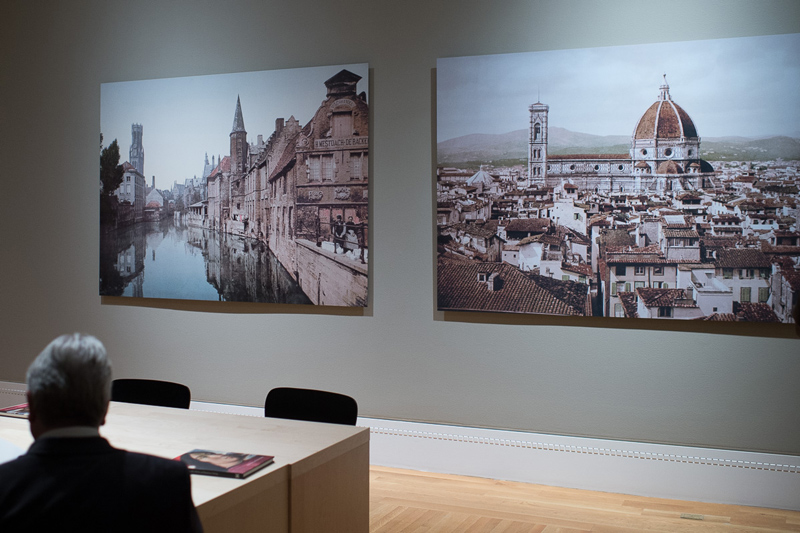 Cityscapes of Bruges (left) and Florence are reproduced in "Face to Face: Flanders, Florence, and Renaissance Painting," on view in the Boone Gallery through Jan. 13.

Two wall-sized cityscapes neatly divide sections of “Face to Face: Flanders, Florence, and Renaissance Painting,” the exhibition on view in The Huntington’s Boone Gallery through Jan. 13. One cityscape is of Florence with its unmistakable Duomo sitting like an empress among the tile roofs. The other is a view of Bruges, a serene canal bordered by towered and gabled facades.

The two views define the exhibition’s duality: Two cities, prosperous and highly cultured, engaged with each other not only in trade but artistic commerce. The surprise is that in the 15th century, it was Bruges that influenced Florence, not the other way around. “Face to Face” co-curator Paula Nuttall articulated those circumstances in a spirited lecture at The Huntington recently. She is the author of the book of the same title. 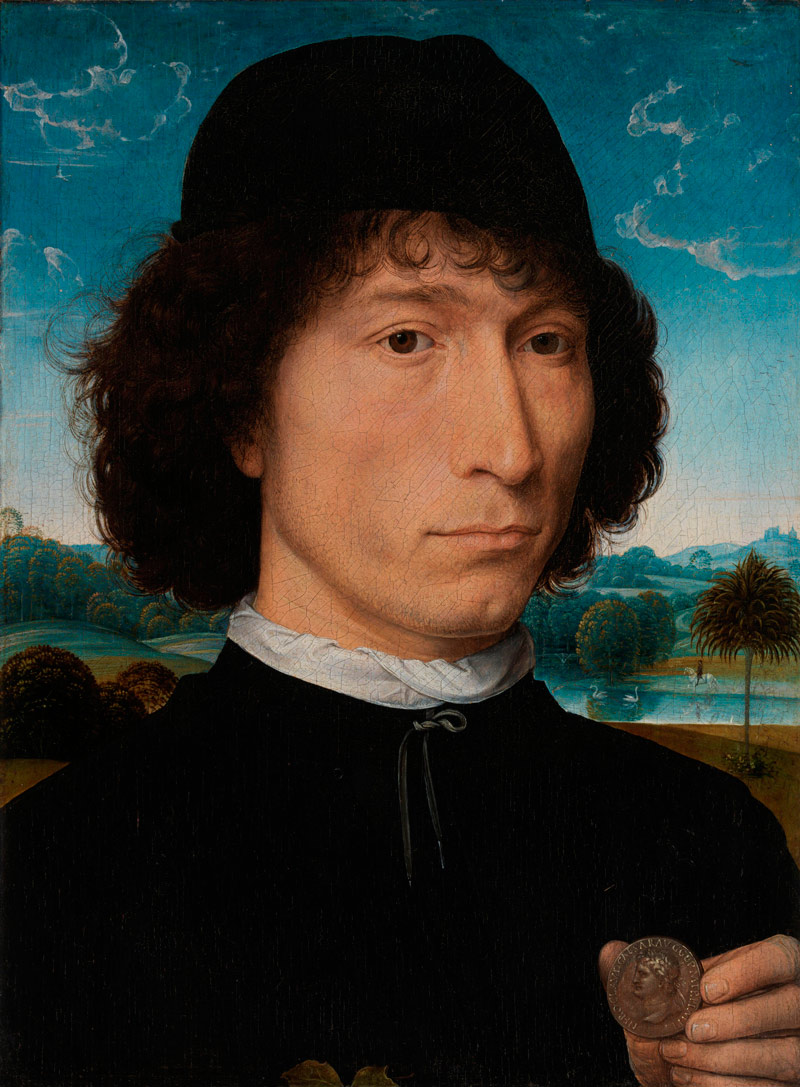 One of today’s well-known travel writers described Bruges, in present-day Belgium, as “pickled in Gothic” because its glory faded when its harbor silted up. “Face to Face” brings to life the vibrancy and splendor of this Flemish capital.

In Renaissance Europe, the dukes of Burgundy ruled Flanders and Bruges was “the jewel in the crown,” said Nuttall. Known for the manufacture of high-quality textiles and other luxury goods such as tapestries and fine metalwork, Bruges traded with the great Italian mercantile cities: Florence, Venice, and Genoa. Wealthy Italian merchants rose to prominence in the Flemish city where the Burgundian court “was a byword for princely magnificence to which every ruler in Europe would seek to aspire in terms of their lifestyle,” said Nuttall in the lecture.

During this period, Flemish painters were quick to innovate. Jan van Eyck was not the first artist to use oil paint, but he and his contemporary Rogier van der Weyden explored new ways of using it to realize a vision of the natural world. Nuttall explained, “They understood that oil, unlike egg tempera, which dries quickly and is a very opaque medium, possesses a transparency and dries slowly. The Flemish painters realized that oil could be blended and manipulated to create extraordinary variations in texture that were very difficult to achieve using the medium of egg tempera [which the Italians employed].” 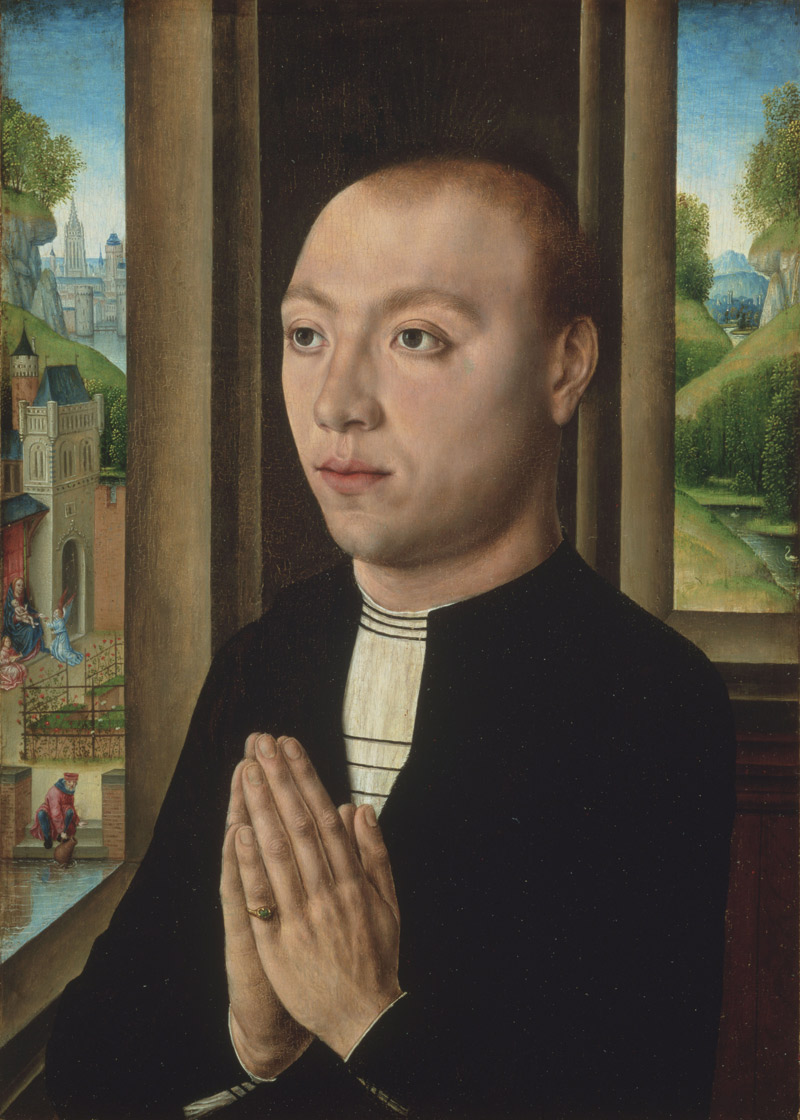 The Italians in Bruges were quick to recognize these Flemish advancements in art. Nuttall cited Hans Memling’s Portrait of a Man with a Coin of the Emperor Nero (above left), believed to be Bernardo Bembo, the Venetian ambassador to Bruges and later to Florence. The subject is shown in three-quarter view, a Flemish innovation, rather than in profile, the Italian standard. Nuttall observed that the three-quarter view “enables you to show more of the face, more of a sense of volume, evoking the sense of real physical presence.” She quoted Italian writer Fazio, a contemporary of van Eyck who praised a portrait by that painter, saying that it was so convincing that it appeared to “lack only a voice.”

Why did the Italians become patrons of the Flemish artists? Nuttall said the works can be considered “very classy souvenirs of time spent in the glamorous Northern city of Bruges.” They were different from the pieces that Florentine artists made at this time and Italians (including Bembo, who commissioned St. Veronica in this exhibition) often became art patrons in Bruges.

One format that Flemish artists developed is the devotional diptych, which opens and closes like a book and was used in daily prayers. On prominent display is van der Weyden’s Virgin and Child from The Huntington along with its original companion diptych panel, Portrait of Philippe de Croÿ, on loan from the Koninklijk Museum voor Schone Kunsten, Antwerp (in case photographed below, at right). Also on view is the Portrait of Lodovico Portinari by the Master of the St. Ursula Legend (above, right). It’s companion panel is from the Fogg Museum in Cambridge, Mass., and could not be lent for the show. (Virgin and Child with Two Angels by the same artist, from LACMA, is displayed with the Portinari portrait tosuggest the original appearance of the diptych.)

Portinari was part of a family that represented the Medici bank in Bruges and actively commissioned Flemish art. Behind Portinari is a very recognizable view of Bruges, including the great tower of the Church of Our Lady, which still exists today. 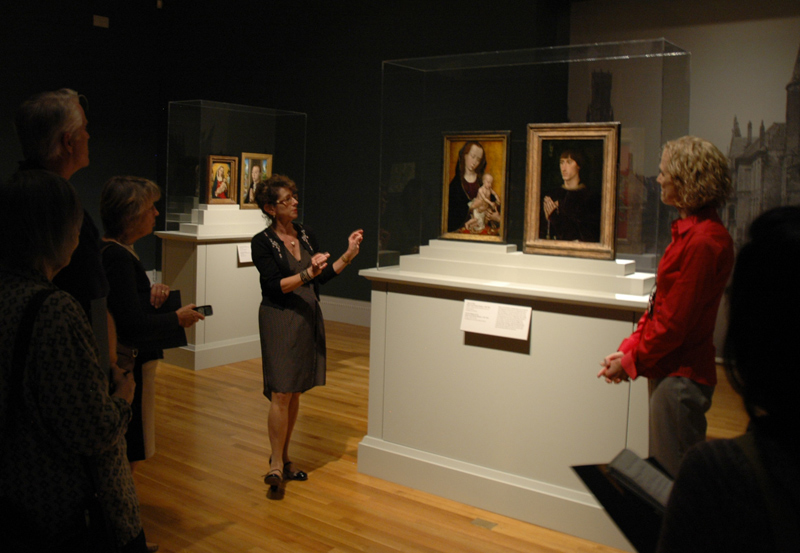 Paula Nuttall, with co-curator Catherine Hess of The Huntington, discusses Virgin and Childand its companion diptych at the exhibition’s press preview in September 2013. Photograph by Lisa Blackburn.

This kind of virtuosity in simulating reality is reflected throughout the exhibition. Take your time and look carefully. As Nuttall said, “These kinds of details still have the power to take our breath away. Yet our eyes are used to seeing reality in images. Imagine the effect of seeing such things in an era when they were absolute novelties. You can appreciate why the Italians were so bowled over.”

“Face to Face” remains on view in the Boone Gallery through Jan. 13.