EXHIBITIONS | Over the Moon 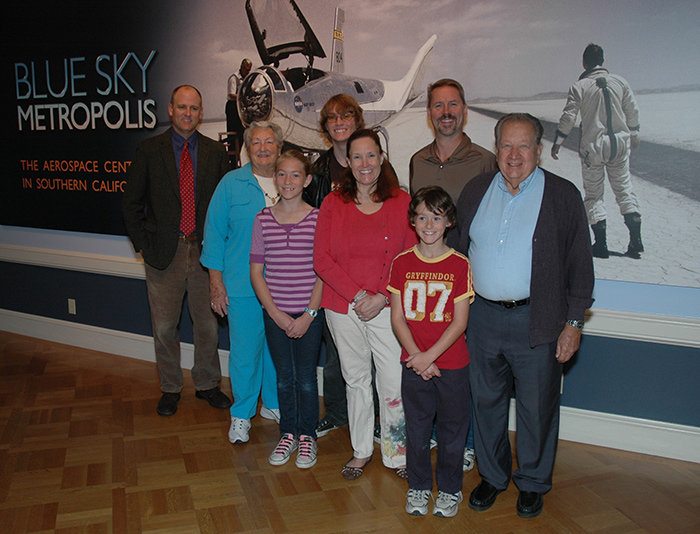 Peter Westwick, the director of the Aerospace History Project with Carol Basney (in blue) and Burt Basney (far right). They came to see the exhibition with their daughter Barbara Van De Velde (in red), son-in-law Jim, and grandchildren Rachel, Josh, and Joe.

When potential donors to the Library consider parting with rare books, photos, or letters, they quickly learn that their collection will join nearly 9 million other rare books, manuscripts, and ephemera at The Huntington. What are the odds the public will ever get a chance to glimpse what was precious family memorabilia?

Burt and Carol Basney recently came to The Huntington with their daughter's family and found out in person how their gift from 2007 took center stage in the current exhibition "Blue Sky Metropolis: The Aerospace Century in Southern California."

Carol Basney is the niece of Harvey Christen (1910–1993), one of the first employees of Lockheed Aircraft Corporation. He was a mechanic, but also a jack-of-all trades. He learned about planes by building them and fixing them and rose quickly. By 1943, at age 33, Christen was a senior manufacturing engineer in charge of thousands of workers at the wartime Lockheed plant. When he died, he left a personal collection of more than 2,000 photos dating back to the early 1930s, including shots of Amelia Earhart paying a visit to the plant.

Burt Basney spent about 10 years going through the photos, describing them and organizing them as best he could, but he and Carol knew the collection belonged somewhere other than the family basement. When they were ready to part with the photos (and with Christen's notebooks and other materials), The Huntington had just launched something called the Aerospace History Project and was seeking to document the rich history of the aerospace industry in Southern California by collecting materials and conducting oral interviews.

The Basneys are thrilled with the place the Christen collection has taken in its new home, including the high profile visibility of several photos in the show. But the gratitude goes both ways. 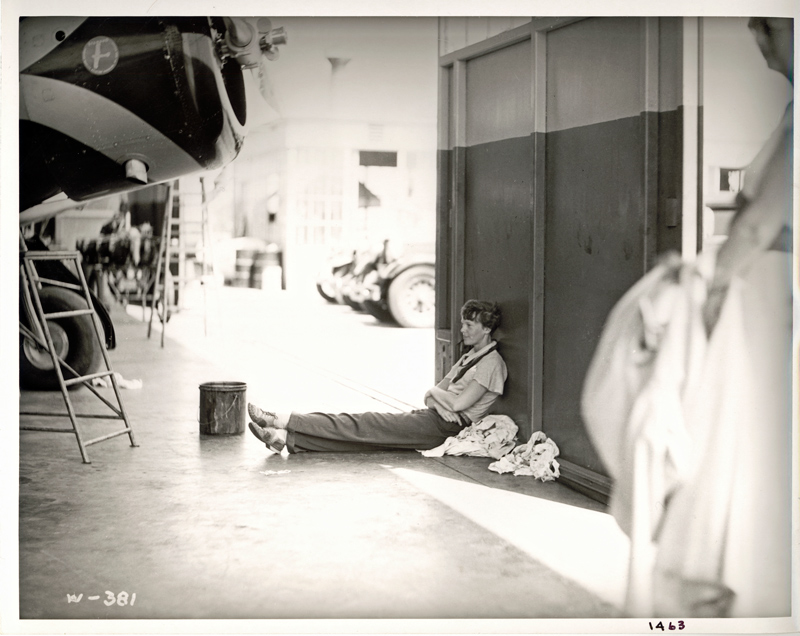 Amelia Earhart takes a break on the Lockheed factory floor in the early 1930s. Earhart presented a glamorous public image but knew her way around an airplane and an aircraft plant. She was a frequent visitor to Lockheed to keep tabs on the construction of her newest airplanes. Huntington Library, Art Collections, and Botanical Gardens.

"It's not just a collection that comes over the transom," said Peter Westwick, director of the Aerospace History Project, "or even something we acquired through a bookseller or some other middleman. We see the human side of it. Harvey Christen was the great-great-uncle to Carol and Burt's grandchildren, and it's nice for us to be able to show them that his work was historically interesting and important."

Although the exhibition will close on January 9, the Christen collection will continue to reach new audiences. "We're stewards of this material," says Dan Lewis, the Dibner Senior Curator of the History of Science & Technology and the head of The Huntington's manuscripts department. He likes to tell people how The Huntington takes the long view of the value of an archive. "Researchers who use this collection will just keep pushing this information out to a wider audience through scholarship, talks, and text books," says Lewis. "We're very conscious of preserving material for future generations as well as the current generation, as a way to ensure that it will be available for research long after we're gone." In fact, one of the Amelia Earhart photos will appear in a new book scheduled for release next year by the Huntington Library Press and University of California Press, also titled Blue Sky Metropolis: The Aerospace Century in Southern California, and edited by Westwick.