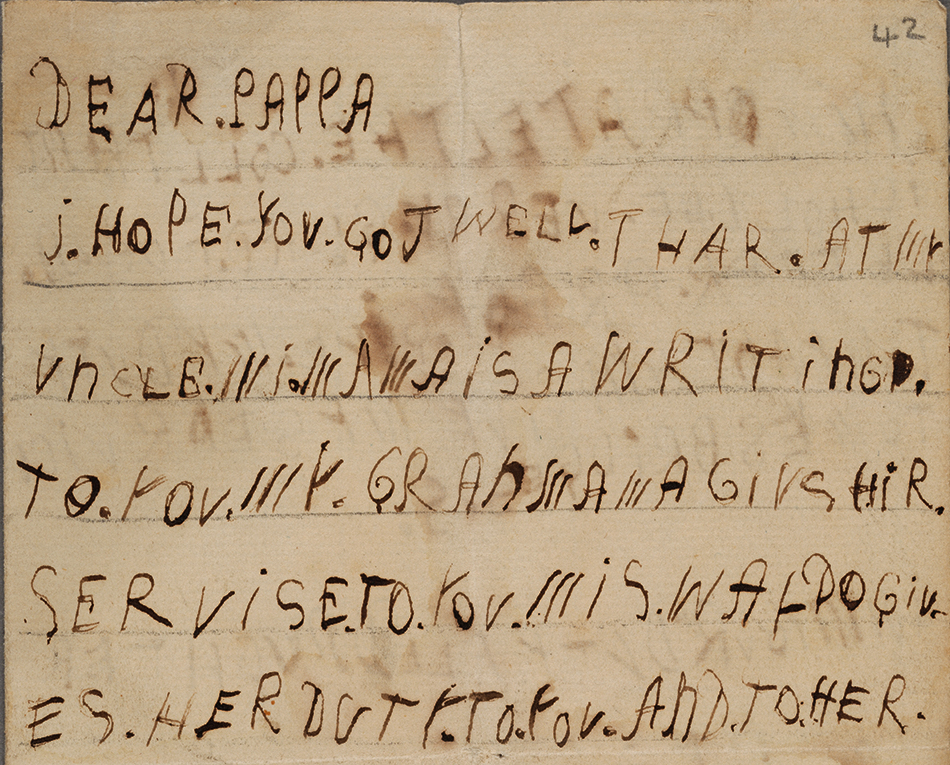 In 1736, just four days before Christmas, 5-year-old Mary “Molly” Leigh wrote a formal letter to her father, Theophilus Leigh, Master of Balliol College, Oxford. The first page of the letter is ruled with straight lines to serve as guides for the novice hand, but the second page lacks them. Molly’s carefully shaped letters gently brush the lines in some places and float just above them in others, giving a subtle movement to her focused penmanship. 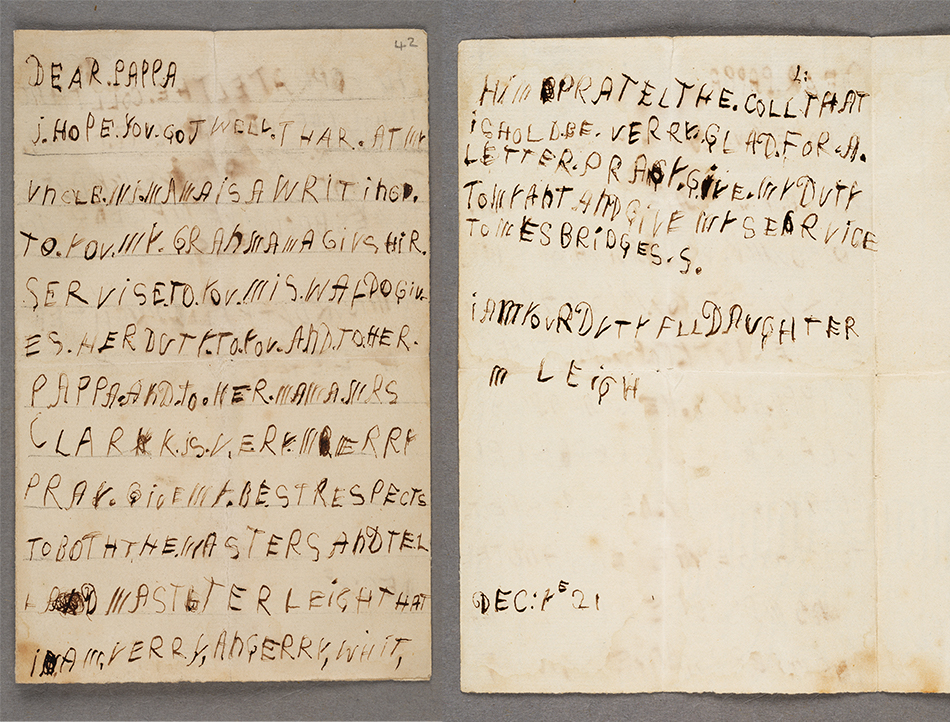 If you read the letter aloud, you might think it was written by a young woman responsible for maintaining personal connections within her family and wider social network, as the contents are filled with mentions of “grandma” and “mama” sending their “service” to her father. But to see the words written in the hand of a girl taking her first steps toward literacy is charming.

On June 10, 1737, Molly’s father wrote to her from Oxford that “you must know you are to have a puppy.” Theophilus expressed his fondness for Molly by signing off with, “I am, my good girl, your affectionate Pappa.” 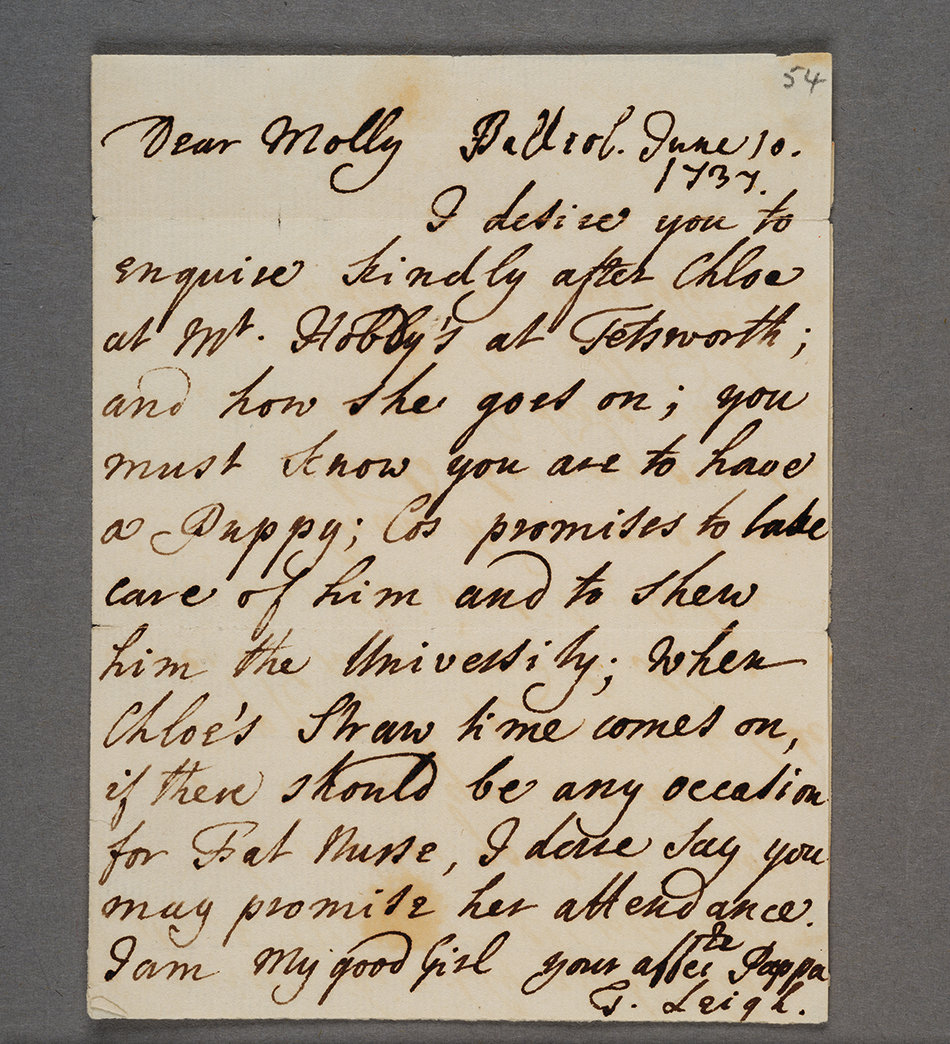 Letter by Theophilus Leigh, Master of Balliol College, Oxford, to his young daughter, Mary “Molly” Leigh, June 10, 1737. The father writes: “… you must know you are to have a puppy ….” The Huntington Library, Art Museum, and Botanical Gardens.

These are just two of the 95 letters between father and daughter that span decades and come to The Huntington as part of the recently acquired Leigh Family Archive, a trove of nearly 400 unpublished letters written during the 17th and 18th centuries in England. Although Jane Austen’s mother was a Leigh, there are no letters to or from the iconic author in the collection. Nevertheless, the material will be of value and interest to Austenites because it provides detailed context for her life, family, and work. Even without their famous Austen cousin, the Leighs would draw scholarly attention. This newly acquired collection—along with The Huntington’s Leigh Family Papers and the nearly 600 Leigh family manuscripts in The Huntington’s iconic Stowe Collection—can be read through the lenses of race, gender, and class to extrapolate aspects of the world beyond the Leigh family that they themselves may not have perceived. 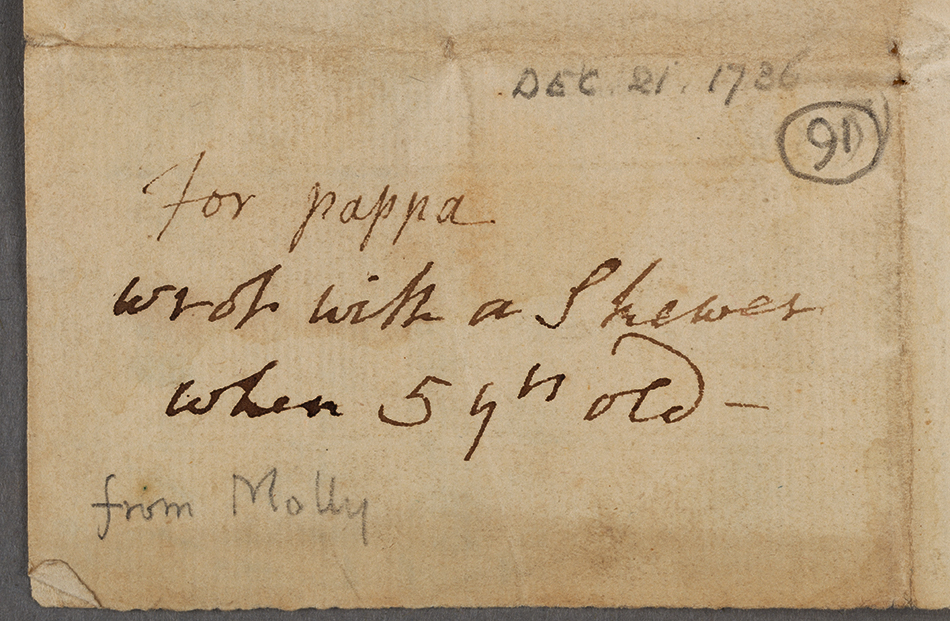 Mary “Molly” Leigh’s annotation on the letter she addressed to her father on Dec. 21, 1736: “wrote [it] with a skewer when 5 yrs old.” The Huntington Library, Art Museum, and Botanical Gardens.

Huntington archivists will soon begin processing the collection so that it can be digitized and made freely available to readers in our reading room and online. However, our professional archival staff will not be the first to impose intellectual order on these manuscripts. As a grown woman, Molly Leigh took on the role of family archivist, leaving brief annotations on many of the letters before her death, in 1797, at the age of 66. She even annotated the letter she wrote as a child, letting us know that she “wrote [it] with a skewer when 5 yrs old.”

Molly’s notes identify some of the subjects in the family’s letters, offer extra details about the topics discussed in many of the letters, and sometimes even relate what transpired after a letter was sent. In addition to being one of the authors of the archive, she also served as its narrator. 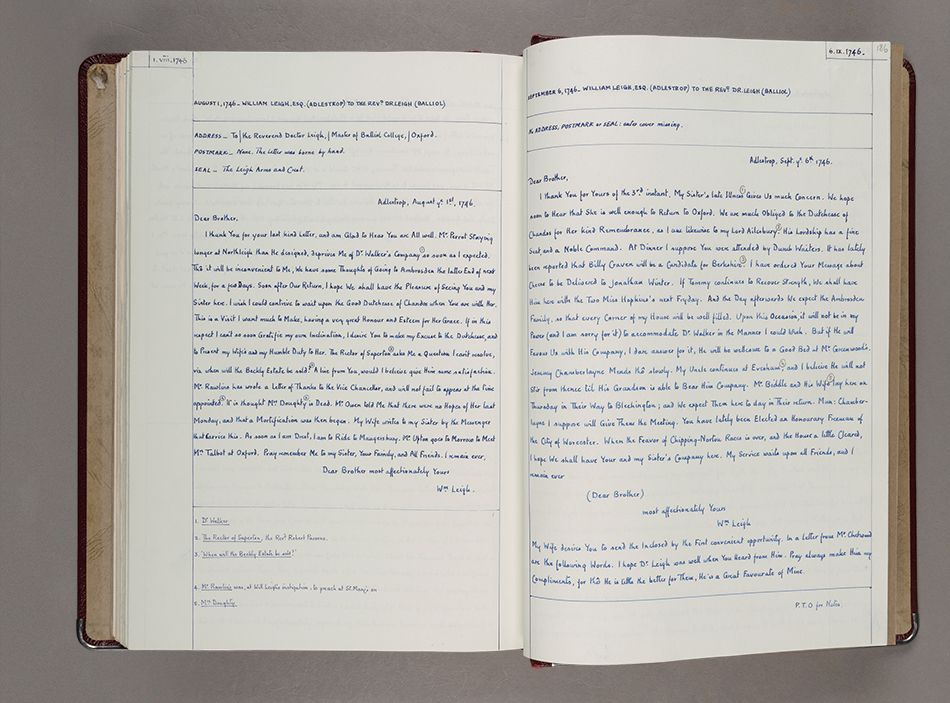 In the mid-20th century, Leigh descendant Gwen Beachcroft became the family archivist. Building on Mary “Molly” Leigh’s practices, Beachcroft carefully transcribed each letter by hand and added her own footnotes to her transcriptions. The Huntington Library, Art Museum, and Botanical Gardens.

The papers were passed down through the line of Molly’s sister, Cassandra Leigh Cooke, and remained in the family’s hands for more than 200 years. In the mid-20th century, another Leigh descendant, Gwen Beachcroft, became the family archivist. Building on Molly’s practices, Beachcroft carefully transcribed each letter by hand and added her own footnotes to her transcriptions, bound in three comprehensive volumes. These volumes are also part of The Huntington’s new acquisition and add even more detail about who people were, how they were connected, and how some of the letters were bundled together for mailing.

Women so often become arbiters of family history, keepers of cultural customs, and protectors of communal heritage. At The Huntington, we are honored to carry on the meticulous and illuminating work that Molly Leigh and Gwen Beachcroft fostered.

Vanessa Wilkie is the William A. Moffett Curator of Medieval Manuscripts and British History at The Huntington.