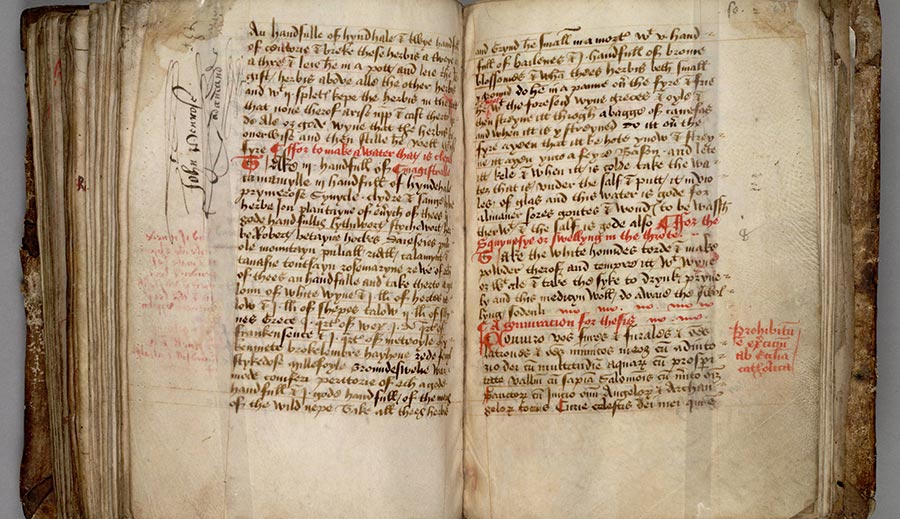 Last year, as a short-term research fellow at The Huntington, I had the opportunity to examine some of the Library’s medical and devotional medieval manuscripts. As a doctoral candidate in medieval and early modern studies at the University of Kent, I’m especially interested in the short “magical” texts in these manuscripts called experimenta and charms. During my review, I came across an interesting marginal annotation next to one such charm: A scribe had added a condemnatory note beside the text that he had copied.

A collection of medical remedies doesn’t seem like the obvious place for contentious or problematic texts. Yet in England during the medieval period, certain methods of healing could be controversial. This is particularly true for charms. Often drawing on distinctly Christian motifs and biblical narratives, healing charms used verbal formulas to do such things as cure fever, staunch bleeding, or aid in childbirth. Powerful words, often Latin, were recited over the patient; written on parchment to be worn as an amulet; or even inscribed on a slice of apple, wedge of cheese, or communion wafer for the patient to eat.

The relationship between charms and orthodox religion during the Middle Ages was complex. While we might consider such practices to be inherently magical, their use of conventional religious language can render them difficult to distinguish from prayers. As historian of magic Richard Kieckhefer has written, magic is the “reverse side of the tapestry of conventional religion.”

Medical recipes and leaves from a missal (HM 1336), England, 15th century, manuscript on parchment. A charm for the “falling evil” or epilepsy on folio 8v of HM 1336. It is easily recognized by the red crosses that here punctuate the names of the three magi or wise men—Jasper, Melchior, and Balthasar—which are to be written on parchment in blood drawn from the patient’s finger and then worn about the neck. The Huntington Library, Art Museum, and Botanical Gardens.

Several medieval manuscripts at The Huntington include charms. They are often easily identified by their red crosses, which indicate to the person performing the charm when they or the patient should cross themselves. But the scribe of one manuscript, Agnus castus with additional medical recipes (HM 58), appears to have had an unusually complex relationship with the texts that he was copying.

Agnus castus is a volume of medical remedies. Most of it was written by one person—likely a professional scribe who was commissioned to produce the manuscript on behalf of a patron or customer. While the main portion of the manuscript was copied toward the end of the 15th century, later users took advantage of gaps on certain folios to supplement the material with their own useful remedies.

Some surviving medieval volumes, or codices, bear witness to the efforts of later users to expunge evidence of charms from their contents. This is often the case for manuscripts that found new owners after the English Reformation, during which charms, with their frequent invocations of saints, became intrinsically tied to “Popish” or Catholic superstition. In these cases, the texts are usually struck out, though on occasion only the Latin formulas or particularly problematic phrases, such as allusions to the Catholic mass, have been removed.

I was surprised to find, however, that the charms in Agnus castus were condemned at the time that they were copied. The original and main scribe of Agnus castus copied four charms into the manuscript: one to staunch blood, one to aid in childbirth, one specifically to help the delivery of a stillbirth, and one to prevent theft. Each of these texts is accompanied by a note in the margins that states: Prohibitum est exercitium ab Ecclesia catholica (This practice is forbidden by the Catholic Church).

Detail from Agnus castus with additional medical recipes (HM 58), England, ca. 1485–1499. A charm against thieves on folio 69r of HM 58. The charm, which is in Latin, calls on several religious powers, including all angels and archangels, to defend the user against thieves and enemies. A marginal note in the same hand asserts that the practice of invoking this charm is forbidden by the Catholic Church. The Huntington Library, Art Museum, and Botanical Gardens.

Marginal notes are a common feature in medieval manuscripts. They provide evidence of the reader’s interaction with the text, sometimes adding interpolations, glossing specific terms, or highlighting particularly useful information so that it can be found quickly and easily. The case of Agnus castus is unusual because the hand that has added the condemnatory marginal note is the same as the hand that copied the contentious text. What was the scribe’s motivation for condemning the charms in Agnus castus? If he was conscious that they were illicit material, then why did he copy them?

Another manuscript at The Huntington, Astrological and medical compilation (HM 64), contains a large collection of charms and other magical texts. In certain places, the scribe has made use of a simple cipher—swapping vowels for numbers—to obscure material that might be deemed illicit. 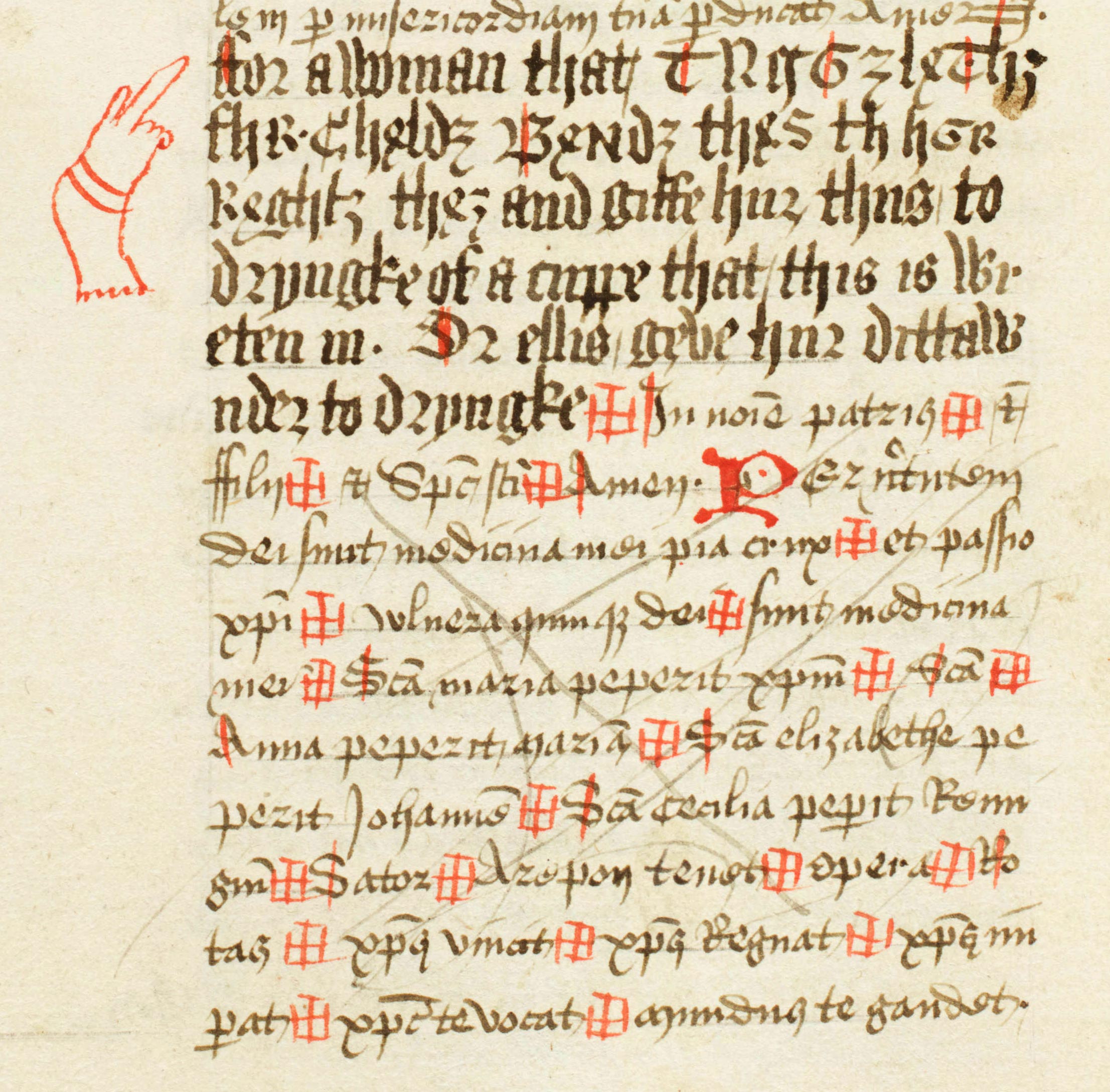 Detail from Astrological and medical compilation (HM 64), England, ca. 1485–1499. The scribe has used a simple cipher in this childbirth charm that appears in the manuscript HM 64 on folio 163r. Some of the vowels have been swapped for numbers. The text has also been subjected by a later user to some censorship, albeit minimally. The Huntington Library, Art Museum, and Botanical Gardens.

In addition to the cipher, Astrological and medical compilation also shows evidence of censorship by a later reader. However, though the offending texts have been struck through, the pen strikes are pale and do little to obscure the writing underneath. This is sufficient to demonstrate that the texts have been rejected—likely due to their illegitimate nature—but the reader is still able to access and use the charms. In this way, the half-hearted attempt to obscure the texts offers the reader a kind of plausible deniability. The marginal notes in Agnus castus could function like those of the cipher and pen strikes in Astrological and medical compilation, demonstrating a rejection of the texts while, at the same time, leaving the texts readable.

But were these texts truly prohibited by the Catholic Church? The answer to this question is not straightforward. The 13th-century theologian Thomas Aquinas opposed charms and other practices that had verbal components on the basis that reciting certain invocations might enter the practitioner into a pact—even an unintentional one—with a demonic force. In the mid-14th century, the Dominican preacher John Bromyard complained that charms were contrary to the Catholic faith, but he acknowledged that this viewpoint was not universal. While some clerical and pastoral writers scorned charms as the purview of the illiterate and uneducated, they could be more accepting of such practices if employed by those who were educated or of higher status. More pragmatic members of the clergy were prepared to tolerate charms for healing purposes because they were widely used by laypeople and, when they resembled prayers, could complement more orthodox religious practices. 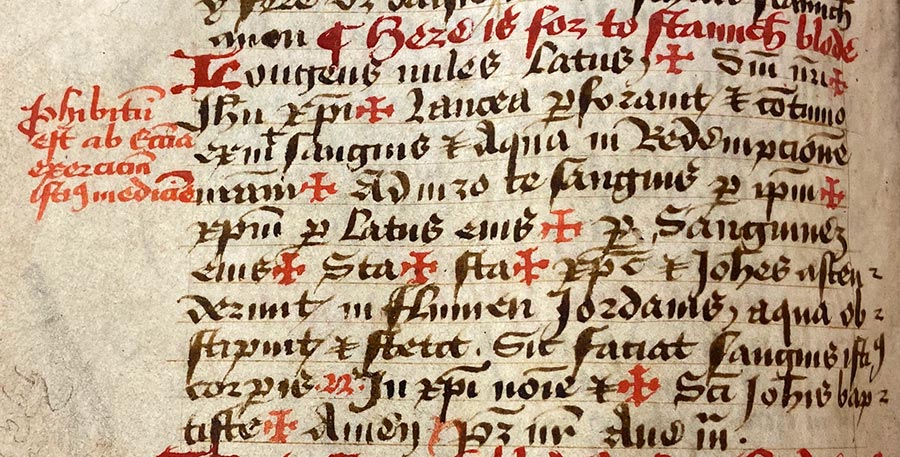 Agnus castus with additional medical recipes (HM 58), England, ca. 1485–1499. Another charm in HM 58 on folio 75v, this one to staunch blood. The marginal note declares that this type of medicine is forbidden by the Catholic Church. The Huntington Library, Art Museum, and Botanical Gardens.

The assertion by the scribe of Agnus castus that charms were forbidden by the Catholic Church may reveal the community from which he hailed. Perhaps he was a member of a monastery or other religious order that viewed charms more circumspectly than most of the medieval population. However, the fact remains that the scribe copied these texts, albeit reluctantly, into Agnus castus. I contend that the marginal note is predominantly performative: If the scribe was sufficiently anxious about the legitimacy of the material he was copying, then he would not have reproduced it at all. The presence of these four charms in Agnus castus suggests a degree of tolerance on his part, even if the marginal additions pretend to claim otherwise.

Heather Taylor is a doctoral candidate in the Centre for Medieval and Early Modern Studies at the University of Kent and a 2022 short-term fellow at The Huntington.