George Romney’s Other Side 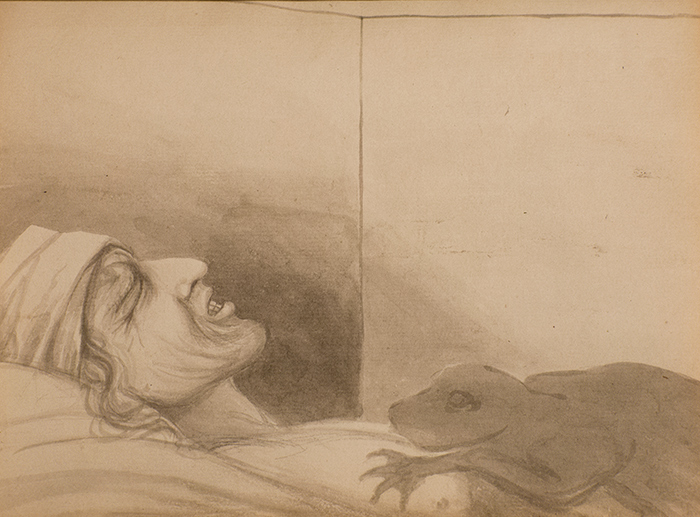 A monstrous frog-like creature nibbling at the breast of a corpse; a claustrophobic encounter between two women who embrace under the eyes of a shadowy watcher; a raving sorceress surging forward, bent on destruction—believe it or not, these disturbing images come from the mind of George Romney, the British painter best known at The Huntington for his dazzling portraits of glamorous ladies and gentlemen that hang throughout the Huntington Art Gallery. Along with Thomas Gainsborough and Sir Joshua Reynolds, Romney vied for the title of Britain’s most fashionable portrait painter in the 1770s and 80s. As they built their own great collection of British art, Henry and Arabella Huntington bought a dozen of Romney’s portraits—from life-size images of stylish brides like Penelope Lee Acton to intimate peeks at the alluring charms of the notorious Emma, Lady Hamilton. Romney’s paintings helped codify what it meant to be beautiful, rich, and aristocratic in late 18th-century Britain. 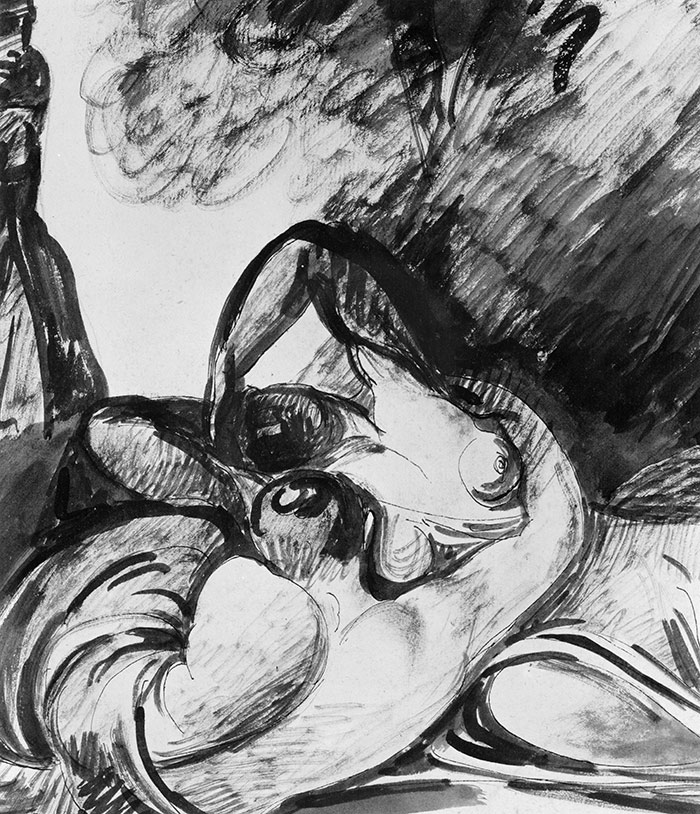 Another, darker side of Romney’s imagination is currently on display in "Eccentric Visions: Drawings by Henry Fuseli, William Blake, and Their Contemporaries" (Huntington Art Gallery, through March 16, 2015). The late 18th-century is usually characterized as the Neoclassical era, a time when artists took inspiration from the composed sculpture and ordered architecture of ancient Greece and Rome. However, as the drawings in this exhibition reveal, a fascination with the extreme, the fantastic, and the supernatural existed right alongside the regularity and rationality of Neoclassicism. It’s not so surprising, considering this is the age that saw the rise of the Gothic novel, in whose thrilling pages the ghostly harbingers of evil and dastardly monks terrorized countless helpless maidens. Like their literary counterparts, many artists catered to this taste for things eerie, intense, or unexplained. 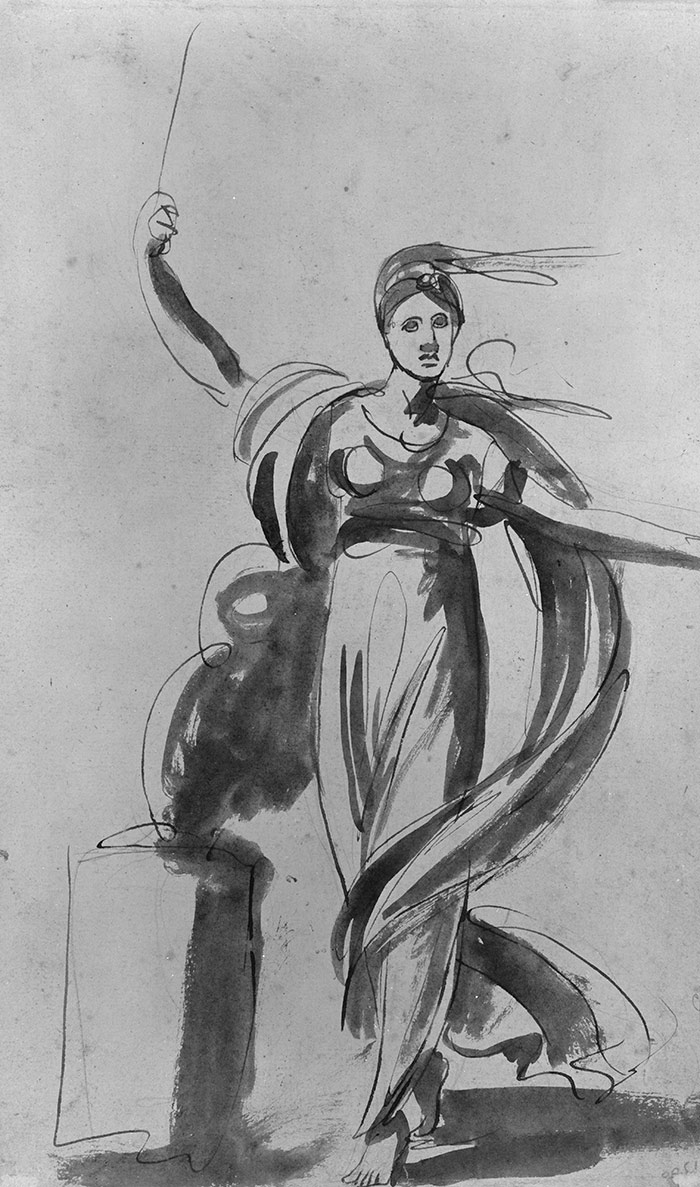 This side of Romney’s art is most visible in his drawings. Romney was a great draftsman who thought of drawing as a vehicle for expression rather than simply as a preparation for his paintings. His pen and wash drawing of Cimon and Iphigenia, inspired by a tale in Boccacio’s Decameron, shows a male figure, barely visible in profile, gazing at the object of his affections. The artist heightens the emotional force of the encounter, a scene of blossoming love that is also an unsettling act of voyeurism, by compressing the image into a small space and pushing the figures up close to the viewer. His drawing of a woman raising a wand high above her head is possibly a study for a painting of Emma Hamilton as Circe, the sorceress from Homer’s Odysseywho turned Odysseus’ crew into swine. With her wide staring eyes and powerful gestures, she is a vision of dangerous femininity. 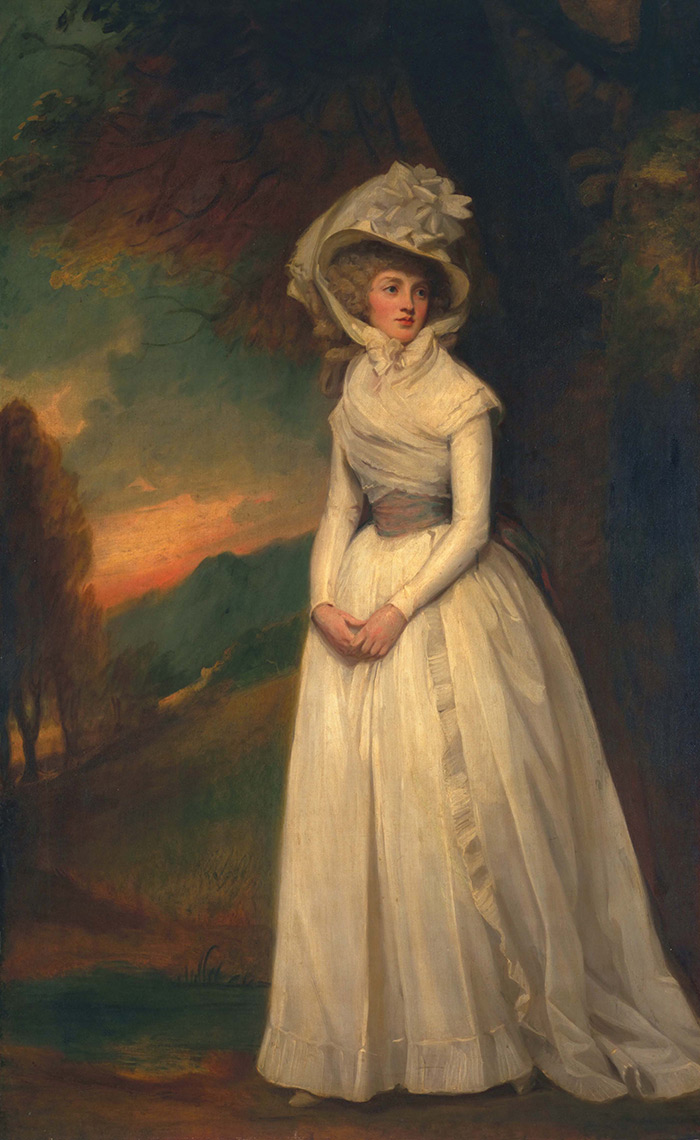 Like these individual drawings, Romney’s sketchbook of around 1796 is filled with expressive imagery. However, these are not pictures made to appeal to the readers of the latest Gothic novel. Many of the drawings in this book go beyond the psychological intensity of his literary subjects, like Cimon and Iphigenia and Circe, to reveal the private thoughts, fears, and desires of a mind in turmoil. Despite his popularity, Romney was by nature a shy and secretive person. By the mid-1790s, he increasingly suffered from bouts of depression and paranoia, while a series of small strokes made working difficult. Art historians have read this extraordinary sketchbook as evidence of the deteriorating physical and emotional state of the artist. In 1799, Romney left London for good and retired to the village of Kendal in Cumbria, England, bringing to an end one of the most brilliant careers in British art. 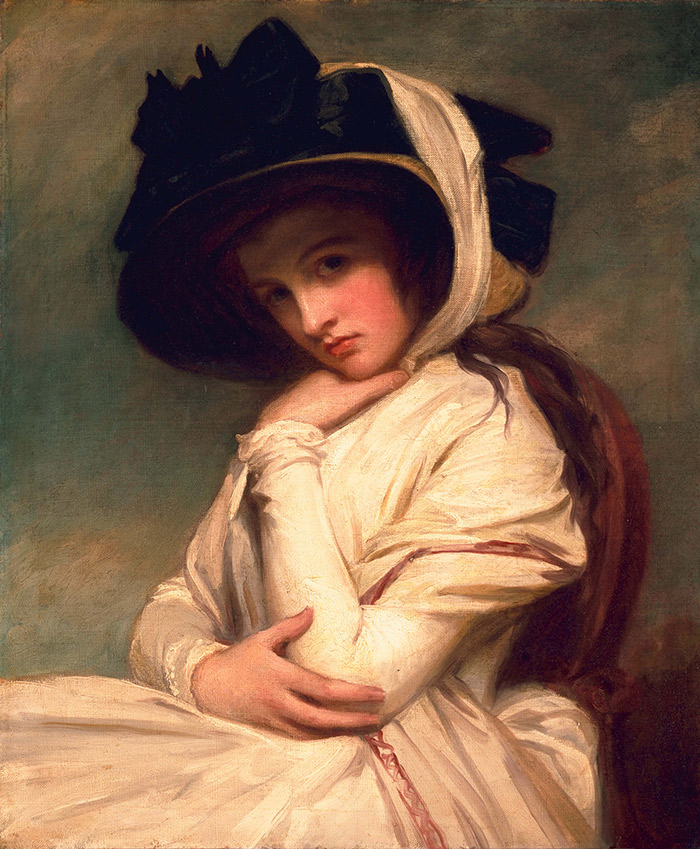 Melinda McCurdy is associate curator for British art at The Huntington.