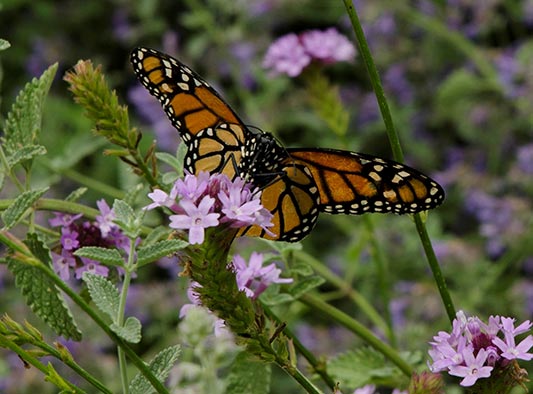 Though monarch butterflies lay eggs only on milkweed, they feed on nectar from a wide range of flowers. Verbena lilacina ‘De La Mina’ attracts monarchs and many other nectar-feeding insects. Photo by Lisa Blackburn.

One indicator of a healthy garden is a diversity of invertebrate life, from soil microbes to insects. With its botanical bounty and limited use of chemical controls in landscape maintenance, The Huntington’s grounds are an urban oasis for wildlife, including an incredible array of spineless wonders. Among the delightfully conspicuous organisms of this type are butterflies. While strolling through the gardens, you might see tiger swallowtails, fiery skippers, and gulf fritillaries. Depending on the time of year, you might spot such seasonal visitors as clouded sulphurs, painted ladies, and the beloved monarch. 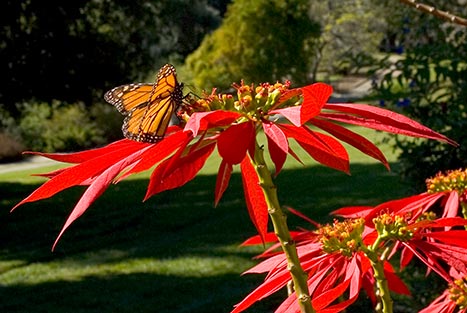 North America is home to two migratory populations of monarchs, one east of the Rockies and one west. (A small sedentary, or non-migratory, population is found in Florida.) These regal insects (Danaus plexippus) complete an epic, complex migration that takes four generations and six to nine months to complete. The eastern population travels south from the U.S.-Canada border to overwinter in central Mexico, while the western population migrates from southern British Columbia to overwinter along the California coast and parts of Baja California, Mexico. 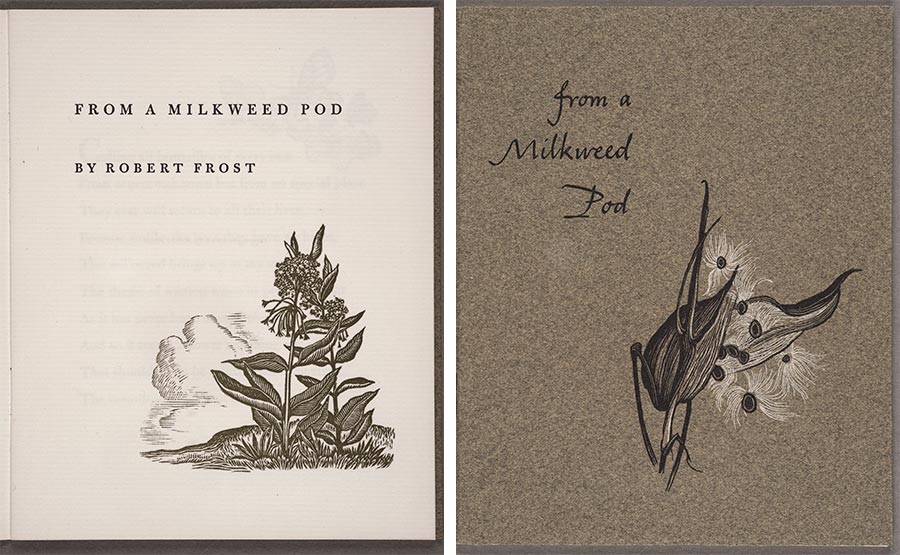 In his poem “From a Milkweed Pod,” Robert Frost observes that the “drab weed” compensates for its dull appearance by sustaining brilliant butterflies. The woodblock illustrations by Thomas W. Nason are likely common milkweed (A. syriaca), found throughout the eastern United States, some prairie states, and parts of southern Canada. The Huntington Library, Art Museum, and Botanical Gardens.

People around the world find symbolic meanings in butterflies, and the migratory monarch is particularly significant in the southwestern United States, Mexico, and Central America. The arrival of these butterflies in their overwintering grounds coincides with Dia de los Muertos, a holiday that honors the dearly departed. The annual appearance of the monarch represents the return of ancestral spirits. So, it is both culturally and ecologically ominous that monarch populations have declined by 85% during the past two decades. In July, the monarch was added to the International Union for Conservation of Nature’s Red List of endangered species. The eastern population has seen a slight recovery in recent years, but the western population remains precarious. Pervasive pesticide use and habitat loss are the main culprits. 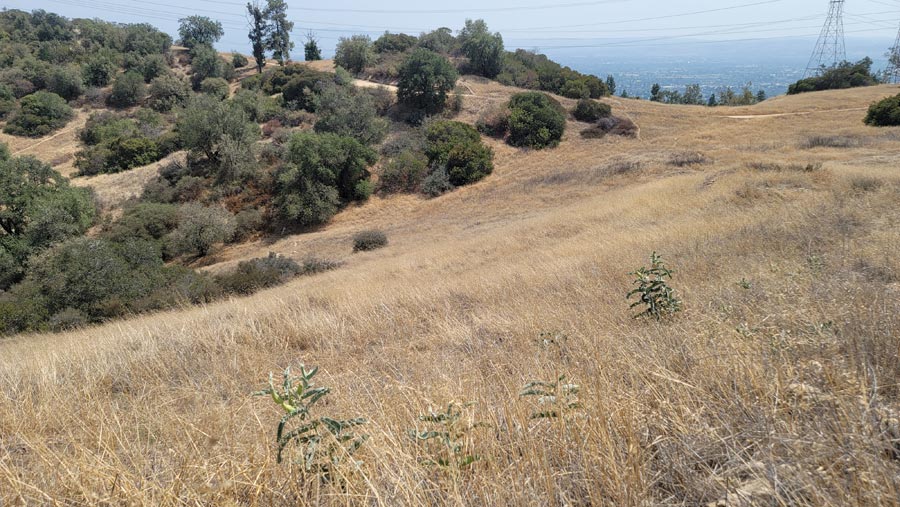 Roughly 100 species of Asclepias are found across North America, with about 15 native to California. Woollypod milkweed or kotolo (A. eriocarpa) grows in many types of habitat, especially in dry areas such as this valley grassland and foothill woodland. Photo by Anthony Perez.

In most butterfly species, including monarchs, adults feed on nectar from a wide range of flowers but rely on specific families of plants to serve as hosts for their caterpillars. Monarchs lay their eggs exclusively on plants in the genus Asclepias, or milkweed. Once ubiquitous (hence the “weed” epithet), these plants have been vanishing from the wild. This is due to habitat being converted for human use and the introduction of invasive species that often displace natives and compete with them for resources.

Milkweed is best known as the host plant for monarch butterfly caterpillars (left), but it also provides food for native milkweed bugs (center), which feed on its seeds, and predators such as lady beetles (right) that feast on the aphids routinely found on milkweed. Additionally, the flowers offer nectar to many different insects. Photos by Sandy Masuo.

Concern for monarchs is inspiring many people to make room for milkweed in their gardens. This, combined with growing support for habitat restoration projects, is increasing demand for milkweed in the nursery trade. In addition to boosting the number of milkweed plants throughout the gardens in the coming months, The Huntington’s plant science staff has been able to lend support to milkweed propagation efforts.

Last fall, Raquel Folgado, The Huntington’s cryopreservation research botanist, mentored Anthony Perez, a restoration plant propagator at Claremont’s California Botanic Garden, the state’s largest garden dedicated to native plants. Made possible by the Botanic Gardens Conservation International–U.S. Conservation Horticulture Fellowship Award, Perez came to The Huntington weekly for six months to learn techniques for increasing the supply of milkweed plants available for conservation projects and home gardeners. One of the techniques is tissue culturing, a method of mass propagation that can generate thousands of clones from a single plant. 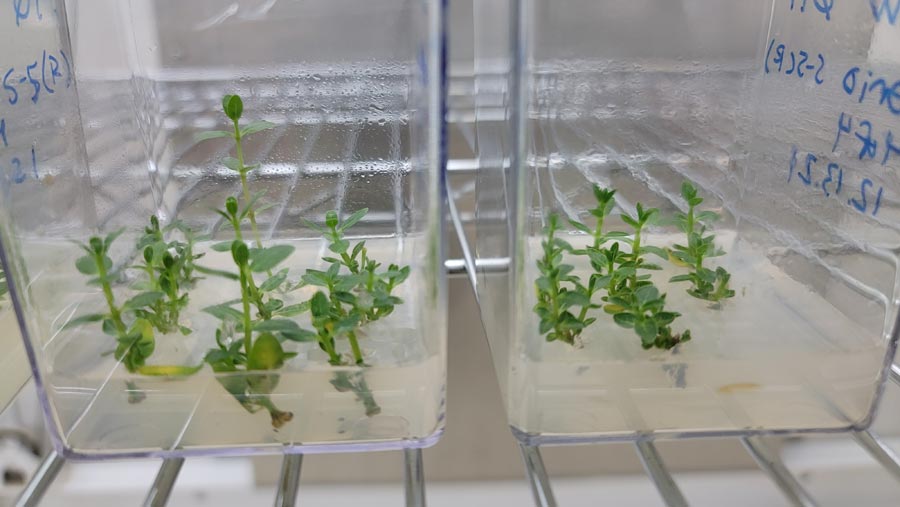 Tissue culturing, also known as micropropagation, is widely used to clone plants. The gel in which these A. eriocarpa plants are growing is a synthetic nutrient medium that can be adjusted to control the speed and manner of growth. Photo by Anthony Perez.

“Before this, I was mostly teaching myself,” Perez said. “Reading scientific articles and learning laboratory techniques by yourself can get you a good distance, but without a supervisor or a mentor who’s experienced in this field, there are a lot of things that you miss. This fellowship was massively important for filling in those gaps.” 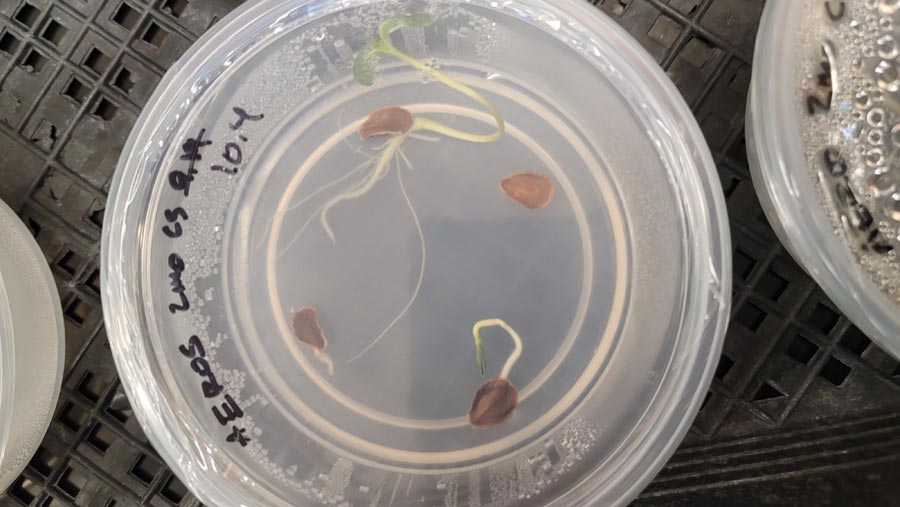 Seeds from many plants experience an embryonic dormancy phase and will not sprout in that state. To germinate, the seeds of most North American milkweed species must first chill for a certain period. Photo by Anthony Perez.

Perez’s other objective was to investigate the optimal conditions for growing milkweed species from seed. Folgado also oversaw the seed germination experiments he performed.

“Most of what we know about milkweeds are from the species that are easier to grow in cultivation,” she commented. “One of those is narrow-leaf milkweed (A. fascicularis). This is partly why it wasn’t included in the study. Anthony wanted to determine the unknown factors that make other species tricky to grow in cultivation, focusing on their seed conservation biology. His interest in milkweed became ours as well because it is a way for us to support habitat restoration. Though this is not something The Huntington focuses on, we can help other institutions that do. We hope to spread plants by spreading knowledge.”

The first part of seed propagation is determining if the seeds require a special treatment—in this case, a chill—in order to sprout. This process (called stratification) simulates the conditions a seed would experience in wild habitat after winter gives way to a warm, wet spring. California is a big place with tremendous climatic and geographical diversity, and milkweeds occur in many different habitats, so the length of chill time needed varies by species. Perez’s experiments were designed to determine the length of chill time required for seeds of A. californica, A. eriocarpa, and A. erosa. Perez presented the results of these trials at the 2022 Society for In Vitro Biology conference in San Diego in June. 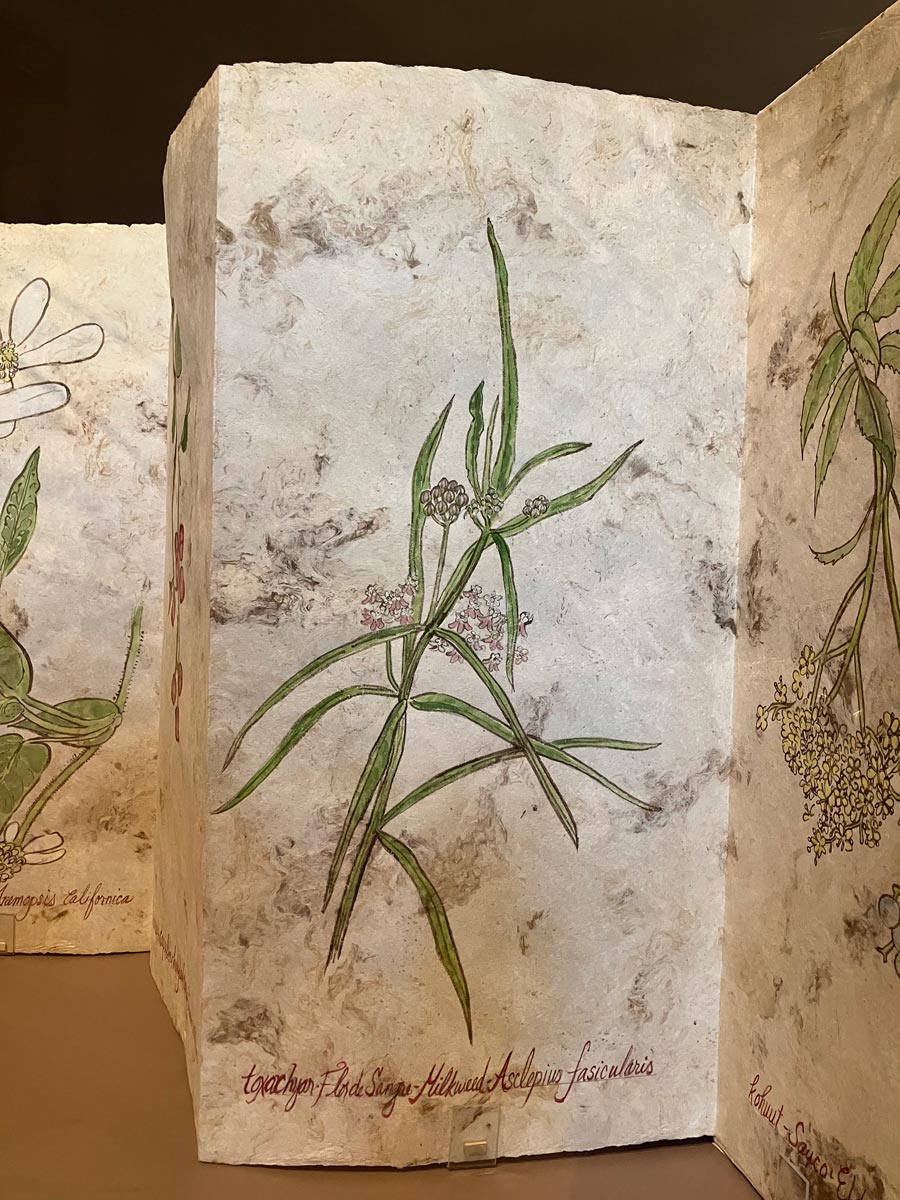 Narrow-leaf milkweed, illustrated as part of the Borderlands exhibition by artist-in-residence Sandy Rodriguez, traditionally served many purposes for Indigenous people. The plants yielded fibers used for cordage and string; the milky sap could be made into adhesives and gum; and the fresh flowers could be eaten. Photo by Sandy Masuo.

Perez is a member of the Monarch Plant Materials Working Group, a think tank of California-based restoration and conservation groups that meet regularly to discuss updates in nursery practices, funding, and project opportunities for various milkweed species. He plans to share the knowledge and experience he gained at The Huntington with colleagues working on habitat restoration. Conservation is a community endeavor, so supporting the efforts of one person in the field can produce a ripple effect that extends far beyond The Huntington—in this case, as far as monarchs fly. 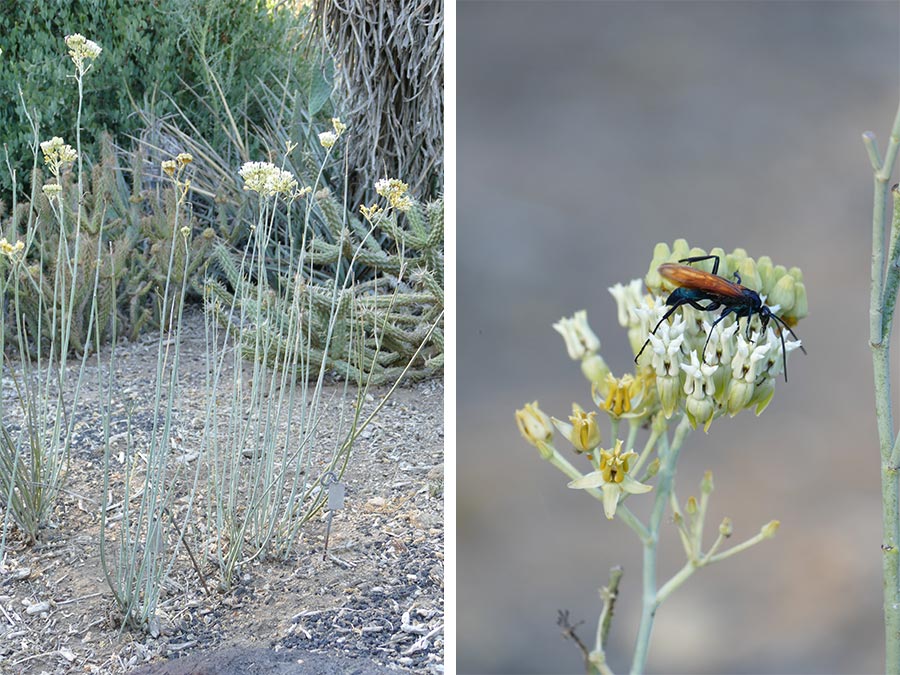 Native to inland desert regions, rush milkweed (A. subulata) is sturdy and drought-tolerant with long, reed-like stems that produce only a few leaves (left). It is probably less significant as a host for caterpillars than as a nectar plant for adult butterflies and other insects, such as this tarantula hawk (right). Photos by John Trager.

Ironically, this “weedy” plant can be difficult to establish in a garden setting. Asclepias species that occur in the Southwest, like many other regional natives, are adapted to a variety of habitats, so it is important to know which ones will thrive in your local climate. Here are some tips for growing milkweed successfully in your home garden: